Falling Free: What happens in Vegas... (The Fall Series) 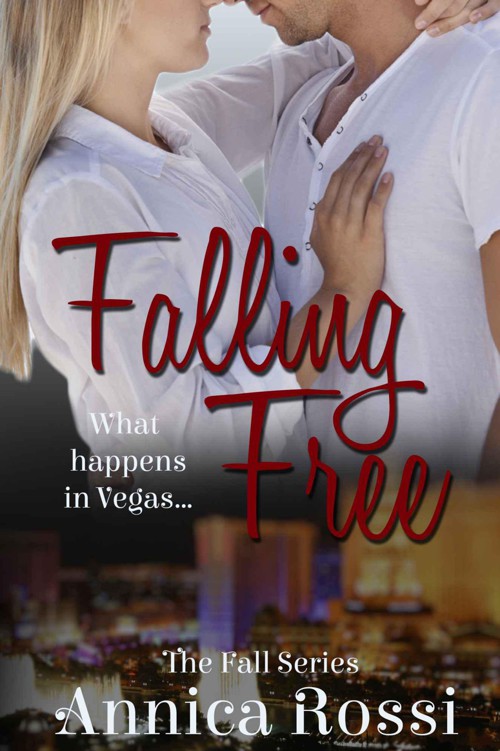 All rights reserved.
No part of this publication can be reproduced, scanned or

with the exception of
short quotes used in book reviews.

This is a work of
fiction, and any names, characters, places, and incidents are

the product of the
author’s imagination or are used fictitiously. Any resemblance

to actual persons,
living or dead, events, or locales Is entirely coincidental.

responsibility for
author or third-party websites or their content.

To the friends, family
and readers who motivate me to keep writing every day, THANK YOU! I wouldn’t
have made it this far without your encouragement, support and constructive
criticism. You’re the f****** best!

“We’re all seeking that
special person who is right for us. But if you’ve been through enough
relationships, you begin to suspect there’s no right person, just different
flavors of wrong. Why is this? Because you yourself are wrong in some way, and
you seek out partners who are wrong in some complementary way. But it takes a
lot of living to grow fully into your own wrongness. And it isn’t until you
finally run up against your deepest demons, your unsolvable problems—the ones
that make you truly who you are—that we’re ready to find a lifelong mate. Only
then do you finally know what you’re looking for. You’re looking for the wrong
person. But not just any wrong person: the right wrong person—someone you
lovingly gaze upon and think, this is the problem I want to have. I will
find that special person who is wrong for me in just the right way. Let
our scars fall in love.”  ―Galway Kinnell

“What the hell happened to YOU? Are
you sick or something? Shit! Sit down, Parker, you look like you’ve been on a
three day bender.”

Shay Roberts was a hundred and
fifteen pounds of ice cold bitch economically poured into a finely tailored Vera
Wang suit. She dressed provocatively, drawing attention to her long tanned legs
that disappeared under a hem so high it left little to the imagination, yet she
wore her cool shrewd exterior like a chastity belt. The way she moved in those
short tight skirts mesmerized me. She was the type of woman who might secretly
have “Like a Boss” tattooed on her ass, and I had no doubt that she could own
it along with the soul of any man lucky enough to read it…and it was only a
matter of time before I would join the ranks of her conquerors.

But there was one little problem.
SHE was also my agent, which apparently classified the act of exchanging carnal
pleasure a conflict. Sure, I’d heard the cliché about not mixing business with
pleasure many times, but MY business had always been poker, a career where the
lines were blurred by the free flow of alcohol, the obscene amounts of cash and
the ever powerful and completely irresistible combination of the two.  My
recently acquired celebrity status, and the formalities that came along with it,
belonged to a new and foreign world, one that involved business contracts and
other foreboding legal terms- like sexual harassment. She should be strictly
off-limits.

That’s what I told myself at
least, and that’s exactly what I’ve been trying to explain to my cock since the
last time I was in her office. I signed my name ten times on her thirty page
contract while trying to mentally tranquilize the raging boner in my boxer
briefs. You’re not the only one who thinks it’s strange I remembered those
exact numbers, but at the time I was so desperate for a distraction that I started
counting everything in sight like some loser trying to talk himself down from a
ledge. Yep, ask me anything. There were five blue pens, two black pens and one
feathery red one in the crystal container on her desk; five individual pictures
in frames and one collage on the shelf behind her, and approximately
twenty-nine leaves on the little plant in the corner. Pathetic I know.

But SHE knew exactly what she was
doing. SHE was the one causing my temporary OCD as she sat there, on the front
of her desk, casually crossing and uncrossing those long sleek legs. She was
baiting me, maybe just to see how far I would go, but if I read her signals
right she wanted to give me as much as I was willing to take. Yes. Take. I
picked up on her tells the first time we met. The more I remained dominant over
her, the more she behaved like a bitch in heat. She was like a female praying
mantis. She’d offer herself to an unsuspecting male, then try to eat his head off
while he mated her. Call me depraved, but I wanted to fuck her into submission
more than I cared to admit.

For weeks I’d been fucking her
mentally. You see, what most men don’t understand is that women want to be
mentally fucked, seduced. It’s true, and I had used my finely honed skills to
mentally fuck this bitch into a frenzy. It was like watching a long slow burn turn
into an inferno, and I was just moments away from reaping the rewards.

The sparks started when we didn’t
exactly see eye-to-eye about the terms of my new contract. It seems Rebel
Spirits, Inc. wanted to make sure I lived up to my bad boy image. I had no
problem delivering, either, I mean, that’s why they signed me in the first
place, right? But some of their requirements seemed outrageous. Let’s take page
four for starters, “The representative must appear in public with two or more female
companions no less than two times per week.” And “public” was tagged with a
superscripted number that corresponded to a list of approved locales known to
attract plenty of media attention.
Really?
If I had to play inside the
fence, much less keep track of the frequency of my interactions with women in
public, I’d rather shoot myself in the dick. And I wasn’t about to back down.
Shay seemed to think these were reasonable requests considering the parameters
of other well-known contracts in the industry, and we’ve been in a sexually
charged deadlock ever since.

Oh, yeah, and I mentioned she’s a
lesbian, right? It became obvious at our last business dinner when she brought
her partner, Brandy, along. Four martinis later when dessert was served, they were
practically sitting in each other’s laps. I enjoyed the show as they took turns
seductively feeding each other crème brulee from the same fork. When I dropped
them off at their place, my cock was hoping for an invitation to the naked encore.
From that moment I knew, Shay was sending me a message, “catch me if you can”,
and I was hearing it loud and clear.

Today, I was here to seal the
deal on the one-year contract she arranged with American Rebel Spirits. It was
also the day I planned to spread her across her desk and fuck that ice queen/dick-tease
double personality out of her until she was lapping up my milk like a kitten. How
could I be so sure? Well, that was the beautiful part. Like I said, she’d been
baiting me, testing the waters if you will, right up to our last meeting, when just
before I left, she leaned in and whispered, “Next time make sure you bring
condoms.”

That was the green light I’d been
waiting for…that is before my trip to Michigan last weekend. Until then I was
hell bent on having my way with Shay, and hopefully Brandy, at the same time. But
now?

I jumped in my chair as she made a
move toward me, holding the contract and pen in her hand. My fingers were
literally digging into the cool leather armrests from the sudden surge of anxiety.
She noticed.
I grabbed the pen and signed wildly, careful to keep my
eyes from straying from the paper. When I was done I handed the contract back,
making sure our hands didn’t touch in the process, and what she did next almost
sent me over the edge.

A wickedly seductive smile spread
over her lips. Then her tongue swirled over them lightly like a cat that had
cornered her prey, and she laughed softly. “I wasn’t expecting to do it here, naughty
boy”, she whispered, “Although if you brought the condoms I might reconsider.”

I shook my head slowly from side
to side as her eyes evaluated me from head to toe.

“Okay then, she quickly relented,
“I promised Brandy I’d share anyway, so why don’t you and the condoms come to
our place tonight at seven?”

It wasn’t meant to be a question,
and it’s a good thing, too, because I was in no shape to answer. Being the M in
the middle of a genuine FF arrangement was one of the few fantasies left unfulfilled
on my sexual bucket list. (Yeah, I have a sexual bucket list. Doesn’t
everybody?)  Just the thought of this dream coming true should’ve sent me into
a testosterone induced, laser focused, predatory state-of-mind, but instead, all
I could do was blink at her like a teenager who just got busted in the bathroom
with a stack of porno mags and an uncapped jar of Vaseline.
What the hell
happened to my swagger, and when exactly did my balls take up residence in Lauren
St John’s purse?

That’s right. I didn’t really
know it yet, but this was the end of an era. The girl had fucking ruined me,
and she had no clue that she single-handedly took down a legend. Why? Because
she was too busy being indignant in spite of the fact that her whole fucking
world was on the brink of caving in.

I must be delirious from the lack
of sleep lately. I’ve had insomnia since trying to adjust to the time
difference in Michigan, and pure exhaustion combined with the slow realization that
I’d been effectively neutered, at least mentally anyway, was hampering my
normally overactive sex drive, OR…Who was I trying to fool? Karma may have finally
caught up with me, and just like the saying goes, she really WAS a bitch.

When Shay took a call, I seized my
chance to escape. From the safety of the lobby, I sent her a text.

Me:   Hey, thanks for the invite,
but I have a guest coming into town tonight. Rain check?

Her reply was quick and straight
to the point.

The woman was a sexual predator,
focused, determined and not willing to take no for an answer. I guess I’d
finally met the female version of myself. Just a few days ago that was one hell
of a turn-on. But now? Now the only woman on my mind was thousands of miles
away and probably not thinking about me.

That’s when it happened. The agonizing
wait was over. My phone rang, and I was suddenly sixteen again, sitting in the
locker room after tryouts waiting to see if I made the football team. My palms
were sweaty, and I felt like the rest of my life depended on the answer I was
about to receive.

The Winter Queen by Boris Akunin, Andrew Bromfield
The Book of M by Peng Shepherd
At the Water's Edge by Sara Gruen
Dead Girl in a Green Dress by Loucinda McGary
It Takes Two to Tangle by Theresa Romain
The Care and Management of Lies by Jacqueline Winspear
Prelude to Magic: The Prequel to Moonlight and Illusions by Diane Wylie
Proof of Heaven by Alexander III M.D., Eben
His Wicked Dream (Velvet Lies, Book 2) by deWolfe, Adrienne
The Dark Valley: A Commissario Soneri Mystery (Commissario Soneri 2) by Varesi, Valerio