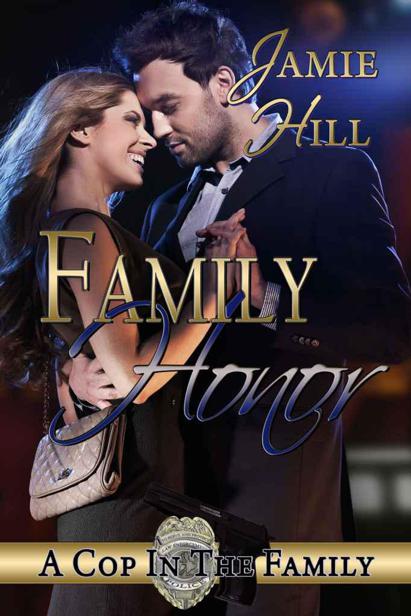 A Cop in the Family, Book 3

To Judith for motivating me to tell this story.

I
couldn't
have done it without your encouragement!

The body was strategically placed in the alley, posed carefully in the same manner as the previous two victims. Knees bent to one side, arms crossed above her head, and her hands clutching a pair of cheap red pom poms. Her uniform skirt and matching vest had once been white and crisp, but were now yellowed from age and blood-soaked.

She might have looked retro chic, like something from the old American Graffiti movie, had it not been for the fact that the woman was fifty if she was a day.
That,
and the deep slash running from ear to ear, nearly decapitating her. Through the coagulated gore, the faint image of a small red bird was still visible on the vest.

"My high school mascot was a cardinal." Detective Melanie Curtis' gaze took in the scene and surroundings.

Her partner, Henry Stone, snapped pictures in quick succession as he circled the body. "I'll bet you were a cheerleader, too."

He paused long enough to shoot her a skeptical glance. "And how is that not the same thing?"

Mel shook her head in feigned disgust. "Not the same at all. We did dance routines to music." She saw his eyes light up and before he could spout off something dirty, she shut him down.
"Focus, little dude.
Get some pictures of her face. My guess is
she's
a hooker like the last two. We need to show these shots to Skinny Sheila and some of the other girls in Oldtown. If she turned tricks, someone there will recognize her."

"Damn," Stone muttered as he zoomed in on the woman's face. "She's old enough to be my mother. Think she's still hooking?"

"Your mother is, isn't she?" Mel stepped back to avoid the fake punch aimed at her, and grinned.
"Just kidding.
You know I love your Umma."

"That's right." Stone straightened his shoulders. "Besides, Korean women don't turn tricks." He seemed to rethink his statement and shrugged. "Not since the war ended, anyway. Nowadays they spend their time keeping alive the centuries-old tradition of making kimchee."

Mel screwed up her face.
"Fermented cabbage.
Remind me not to invite your mom for the holidays again this year."

"She'll be there, and she'll bring kimchee." He studied the body for a moment,
then
turned to Mel. "Our man is left-handed."

"What?" She blinked, her mind already fast-forwarding to another Christmas of her father bickering with Stone's mother, and celebrating with a bunch of cops that were the closest thing to extended family any of them had.
I'm
already dreading the holidays that are still months away.

"Left-handed." Stone drew her back to the present.
"Our slasher.
He's
a lefty. See how the mark is deeper on that side of her neck? The knife went like this." He motioned from the right side of her neck to the left.

Mel thought about that as she walked around and stood behind the woman's head.
"Unless he cut her from behind."
She made the same motion Stone had, using her right hand.

He shook his head. "I don't think so. Write down lefty." He continued to snap photos.

"Whatever." Mel did as he asked. Her partner usually had a keen perception for that kind of stuff, but this time she
wasn't
so sure.

Commotion behind Stone livened up the sealed-off alley. "Wake up kids, the grown-ups
are
here."

Mel glanced up to see two crime scene investigators from the Wichita Police Department arrive with their fancy kits. She got along with most everybody in the cop shop, but the CSIs had been hard to live with since the occupation had landed its own television show.
"Hey Martin.
Hey Zybowski."

The taller of the two investigators towered over height-challenged Stone by nearly a foot. "You know we'll take pictures, Stone," he said derisively.

"I know I'll get my hands on them sooner if I take my own, Zybowski." Stone snapped a few more shots then stepped back. "But have at it. She's all yours."

Zybowski sneered at the woman.
"Like we'd want any of that."

She glanced at her watch.
Nearly midnight.
Too late to do any more tonight
.
They'd
start fresh in the morning. "We'd appreciate your report as soon as you can get it to us tomorrow."

"Let's go, Stone." Mel turned and walked away, knowing her partner would follow. As an
afterthought
she looked back and added, "Check the direction of that slash mark, will you? See if you can tell if our guy was left or right-handed."

"How could we possibly tell that?" Martin frowned at her and got to work with his counterpart.

She turned around and kept walking. She rolled her eyes at Stone who had caught up to her. "Think he's that stupid, or just being an ass?"

"Yes to both. Man, if I was six-foot-something I'd give that moron Zybowski a piece of my mind."

She smiled at him. "If you were six-foot-anything you wouldn't be the man we all know and love."

"Says the woman who's nearly that tall herself.
You don't remember what
it's
like to be five-six, do you? You probably passed right by that height in elementary school."

"I'm sure I did.
Left it back there with size three clothes.
Can't remember that long ago, little dude."

At the end of the
alley
he lowered the yellow crime scene tape and they stepped over it. "You know you're the only person who gets away with calling me ‘
little dude
’, right?"

"
Right,
and I promise not to do it in public unless you piss me off." She nodded to the uniformed officers who were keeping tabs on the alley and stepped up to her sporty black Murano. "You got your car?"

"Yep."
He nodded to his small electric Volt.

Mel bit back a comment about the tiny powder-blue vehicle. Stone loved his eco-friendly car and as much as she enjoyed teasing him, she knew her limits. "See you bright and early."

He waved his camera. "We'll download these pictures and get started."

"Really looking forward to it."
Mel sighed as she slid onto the leather seat and took a moment to inhale and slowly let it out. Ten years in Homicide had left her
jaded,
and hard to surprise. But with each dead body there was a moment when she let herself think about them—who they were, what they did, how they felt during their last moments on earth. Then she walled off her emotions and systematically solved the cases, one right after another, leaving more closed than open on the books.

Her father had taught her how to do that. Thirty years on the force gave him license to teach her plenty about the workings of the WPD. When he was injured in the line of duty and retired at the rank of captain, Gene Curtis was much beloved by most in the department. Now he tended bar at the local cop hangout, Morgan's, more to keep in touch with everyone than for the pay. And he never let much time go by without reminding his daughter,
"Every victim is somebody's child.
Maybe somebody's parent.
Try to remember that."

"I remember, Cappie," she said to her father, or more accurately to the windshield as she drove. "I always remember."

It was a short drive to her house, a three-bedroom ranch in a pleasant, older neighborhood with lots of tall trees. Two blocks from her father, who still lived in Mel's childhood home, they lived mere minutes from the cop shop, a feature which appealed to them both. Mel pulled into her narrow garage and pushed the button to lower the door.

Inside the house, she tossed her keys on the buffet and secured her Glock 22 handgun in the top drawer. After leafing through the mail, a mixture of ads and credit card offers, she tossed the stack down and decided to deal with it later. She was suddenly very tired. A long day had become an even longer night. She glanced toward the kitchen where
she'd
been preparing some casserole meals to freeze into smaller portions for her and her dad when the call came in.
She'd
already refrigerated the food, everything else could wait.
Tired.
She headed down the hall.

Mel pulled the ponytail holder from her long, light brown hair and tossed it on the bathroom counter. She took a moment to scrub the light layer of makeup from her face and brush her teeth. She peeled out of her clothes on the way to the bed, grabbing the oversized t-shirt she slept in and slipping it over her head.

The last thing she noticed before turning out the light was the framed photo of her mom and dad on the nightstand. The poor victim's face from the alley flashed through her mind and she thought of her own mother, pictured in the photo as she liked to remember her—pretty and robust with dark brown hair worn in a shoulder-length bob.
She'd
lost her hair, most of her weight and all her energy when the pancreatic cancer zapped her. Cruel and efficient, the disease spread quickly and Frannie Curtis lived only three months after the initial diagnosis.
It'd
been a rough time for all of them, and even though it was eight years ago, Mel still thought of her mother daily. She knew her father did too. They talked about her often, and they were good memories now.