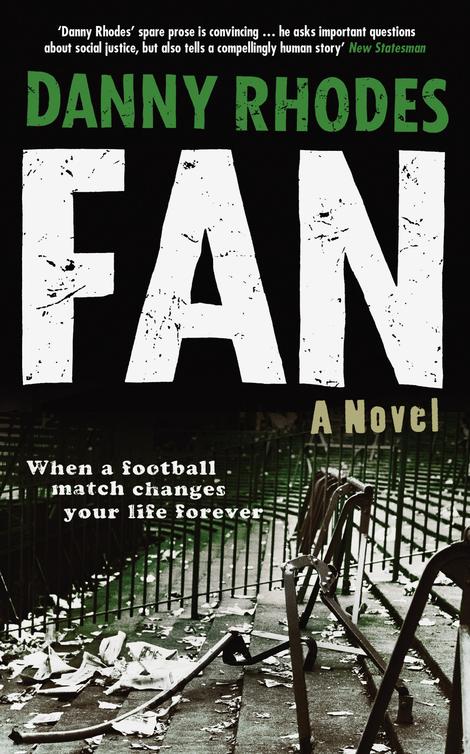 ‘Danny Rhodes returns with a soldier’s tale that delivers a late, and startling, ricochet. Rhodes does the urban listlessness that drives his naïve hero to the colours with an unaffected grace and low-key empathy’
Independent

‘And excellent debut novel, definitely in my top ten of the year’ Scott Pack,
The Bookseller

‘What I find most appealing is the way that Rhodes is more than capable of making a social or political point without ever neglecting the actual storyline or sacrificing the relationships between his characters. Scottie’s journey and experiences are genuinely moving…’ Steven Harris,
Open Wide

‘What I particularly like about Danny Rhodes is that what he is writing really is proper crossover fiction. It’s about life and death, life-changing decisions, coming of age, and the relationships we have with our family and friends. It’s about the places we grow up and the people we know. It’s about coming to terms with grief.
Soldier Boy
is written with good pace, emotional honesty and a clear-sighted and humane view of people’ The Book Bag

‘A tender take on modern youth. Rhodes dramatises their sense of exclusion with freshness and insight’
Guardian

‘Subject and setting imply a Loach-like bleakness, but this finely crafted and often lyrical debut novel offers far more than hoodie-hugging sympathy or sink-estate despair. JB, with his great but baffled expectations, shakes hands across time with Dickens’ Pip’
Independent

‘A striking debut novel that deals with a vital topical issue. A young offender is sent to paint beach huts in Kent, and encounters people and forces that promise both his salvation and ruin’ Waterstones

‘This is Rhodes’ first novel, and his relatively unmannered voice alongside his deft combination of social issues and teen angst suggests that there may be even better to come from him’
London Paper

‘Rhodes is writing about what he knows and isn’t afraid to present it plain and unvarnished. You can’t ask more from a first time novelist than that’ The Book Bag

Rhodes provides our often misunderstood youth of today with a distinct and passionate voice. This is a fantastic debut, a definite two-day read that will have you scanning the shelves for his next novel’
Aesthetica

The day trip over

To the lads, wherever they are

In memory of James Quinton, poet and editor

Remembering the 96 and all of the others

The Moelwyn Hughes Report of 1946.

The Harrington Report of 1968.

The Popplewell Report of 1986.

The Safety of Sports Grounds Act 1975.

The Green Guide second edition of 1976.

The Green Guide third edition of 1986.

Cold September turned colder when he caught the evening news. Marooned in a forgotten room of some cavernous hotel, his little window served him a featureless rectangle of English Channel, of slate-grey sea etched with off-white breakers. The beach below was a shelf of deposited pebbles above another shelf and then another.

The edge of the world.

He struggled to the water on his arrival, slid on his haunches down each steep bank, satisfying some urge to stand at the shoreline, to hear the water gathering and dragging at the stones. Looking seaward he took in the miserable hue of ocean and sky, the distant hulking form of the power station out on the spit, and fuck all else. The air was fresh and zestful though. He sucked in a great lungful of the stuff, released it slowly, revelling in the act. But his calves still succumbed to cramp as he made his way back. He was forced to use his hands, to drag his frame up the shelf like a sea turtle, emerge breathless and flush-cheeked at the top.

A posse of golfers were making their way along the links course, dressed in garish yellow. A white van was parked on the kerb, two lads in the front stuffing their faces with service station sandwiches, copies of the
Sun
propped on the dashboard.

He fought to regain control of his breathing. Out of order, knees fucked, his thirties catching up with him, attending a teachers’ conference he had no interest in. He’d asked if
he could opt out, landed a certain look from the personnel manager. Apparently it wasn’t acceptable to stand still. He’d asked when that had changed, when it had become a sin to tread water.

‘You can’t tread water for long before you sink…’

The door had been politely closed in his face.

The students kept him grounded. He couldn’t resent them with their pie-in-the-sky ideas, even if most were lazy bastards who wouldn’t amount to anything. His job, he understood, was to make them believe anything was possible and to help them on their way by ensuring they reached their quota of acceptable grades. Truthfully, it didn’t matter much what happened to them after that. Sometimes he ran into one five years down the road, kid in tow, on the way to the supermarket or back from it, ciggie in hand, pushchair laden with nappies, lads three steps ahead of their girlfriends, tense enough to snap. But they smiled at him and called him Finchy, asked him if he was still at the school and some of them apologised for being little pricks and he lied and told them they weren’t so bad.

He sent them out each year with their little brown envelopes; sent them to get on with the rest of their lives. Somebody somewhere totted it all up. The gears shifted a notch. Another cohort dropped into place. It really didn’t matter.

But the news on the TV mattered.

The images on the screen mattered. There was the man in his baggy shorts banging in the goals for Middlesbrough and Sunderland and there he was again in his trademark green pullover on the dog track at Wembley, two arms raised above his head, thumbs up, playing to his people. There he was escorting a clown from the hallowed City Ground turf, cuffing some bloke around the ear, shooting two fingers at the Trent end boys for calling a stricken Charlie Nicholas a wanker. There he was with the Division One trophy, the League Cup,
the European Cup, side by side with Peter Taylor. There was Trevor Francis stooping to head the winner against Malmö, rolling over the concrete shot-putt circle in the Olympiastadion. There was the mischievous grin as he fielded questions from reporters, gave Motto the runaround, messed with Ali. There was the beetroot-coloured, pockmarked face that signalled his final days in management, the wretched alcoholic. And there he was at the end, the old man in the cloth cap sat in the stands at Burton Albion.

He felt like he’d been kicked in the stomach, stared out of the little window at the water, gulls arcing against the wind, spatters of rain on the glass. He had an hour to kill until dinner. He’d planned to go for a swim but his breath was well and truly knocked out of him. He fell back on the bed and stared at the ceiling instead, thinking about Kelly. She wouldn’t be home. It was too early. He didn’t want to speak to her anyway. He couldn’t speak to anybody. He turned on to his side and stared at the wall, closed his tired eyes.

Piss-flooded terraces and asbestos-roofed covered ends. Testosterone-fuelled foot soldiers and brutal police escorts. Soul-destroying defeats and ecstatic celebrations that suggested life really did depend on it all.

A procession of memories.

Arse-ache coach trips across the Pennines, to the Black Country, to London fucking town. Up the country and down again, week in, week out. Thatcher’s bloodied Britain coughing up its innards. Smokestacks and drizzle. Retching fucking suburbs. Moss Side. Toxteth. The Meadows.

Bradford. Kenilworth Road. Heysel. The
Herald of Free Enterprise
. Kegworth. Hansen strolling around at the back.
Quarter to five on a Saturday. Ron bloody Atkinson. John fucking Aldridge.

And the boys. Bob’s bus. British Rail. The most boring town in England. The Brilliant Corners. Cud. The Wedding Present. The Stone Roses. High-school girls. A grammar school for boys. A new-build primary in 1976. A teacher who stood six feet six, who spent his weekends watching Nottingham Forest take on the whole of Europe and beat the fucking lot into vile submission.

All of this spitting at him out of the past.

BJ, Jeff, T-Gally, Hopper, Gav, Stimmo, JC and Sharpster. The whole fucking bunch. He’d not seen any of them in years. He could see them in the gloom now, though, all of them, sixteen years old, seventeen, eighteen. Formative years dominated by one shared obsession. A way of life.

And something else. Something shifting in the silt of his memory. Twisted crowd barriers. Lads lugging makeshift stretchers across a pitch strewn with the injured and bewildered. The dead lined up in rows on the turf. Twisted minutes. Twisted metal. Twisted news reports. Everything twisted.

Scarves draped over the gates at Anfield.

Scarves hanging from the goalposts at the Kop end.

A carpet of colours.

Him in full darkness now, removed from the present yet part of it still, the hotel pipes clanging, the far-off sound of doors closing, lifts humming. The distant echo of laughter. A clap of false thunder from the military range along the coast.
A cold dread seeping through him, starting in his toes and rising. The things he’d buried coming back again. Everything kicked up. The silt lifting.

He switched on the lights, turned on the TV again, avoiding the news at all costs. He closed his eyes, painted himself a pastoral picture, a pleasant Sunday, a meadow, a barn and a blue sky.

The fens in summer.

He fought with all his might to block the bad memories out.

But they came anyway. Of course they did.

A naked body dumped in a hedge beside a set of kiddies’ swings.

He sat up, desperately fending them off.

It was too late.

The barn door was open.

The black mares had bolted.

It was the City Ground.

It was your City Ground.

It was St Andrews and Villa Park.

It was White Hart Lane.

It was Ayresome Park and St James’ Park, Old Trafford and Goodison.

It was The Den and Plough Lane, Filbert Street and the Baseball Ground.

It was Highfield Road.

It was Maine Road.

It was all of these grounds and dozens more.

Little Lola by Ellen Dominick
Imagination According to Humphrey by Betty G. Birney
Mending Hearts by Brenda Kennedy
The Hothouse by the East River by Muriel Spark
Joanne Dobson - Karen Pelletier 05 - The Maltese Manuscript by Joanne Dobson
Fire in the Hills by Donna Jo Napoli
The Body in the Basement by Katherine Hall Page
In Search of a Memory (Truly Yours Digital Editions) by Griffin, Pamela
The Ivy by Kunze, Lauren, Onur, Rina
Flame of Cytherea: Cytherean Chronicles book 1 by D. R. Rosier