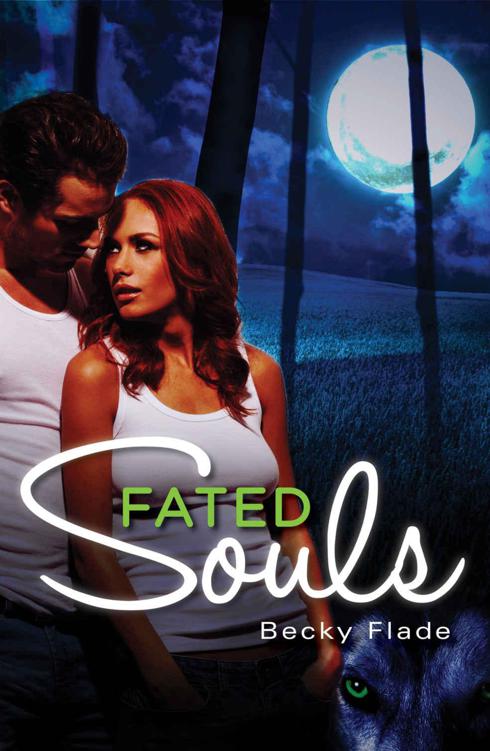 Amazon, the Amazon logo, and AmazonEncore are trademarks of
Amazon.com
, Inc., or its affiliates.

This title was previously published by F+W Media; this version has been reproduced from F+W Media archive files.

To Mom and Dad,

You’re proof that with a little

hard work and a lot of love, there is such

a thing as happily ever after.

Sneak Peek:
By the Light of the Moon

Without the following extraordinary people
Fated Souls
would still be collecting e-dust on my hard drive: Nicholas Page, Casey Flade, Morgen McGeehan, Kenny Flade, Jacqueline Packard, Dejà Perry, Christine Ouellette, and Stephanie Hampton. You know what you did and I’ll be forever grateful.

My heartfelt thanks to Jennifer Lawler, Julie Sturgeon, Jess Verdi, and everyone at Crimson Romance for turning my story into a beautiful book.

“For crying out loud, what the hell is that?” Maggie mumbled as she dug under her sleeping bag to pull the prickly pine cone from under her seat. She laughed and pitched it several feet away. Could’ve been worse, she thought philosophically, and her grin turned rueful. Seemed that had become her personal motto. She glanced around the lovely moonlit forest in northern Minnesota; she’d gone from investigating crooked public servants to hunting mythical monsters that howled at the moon.

Maggie O’Connell hadn’t always been a tabloid journalist. Her career as an investigative reporter had been gaining speed on the fast track when it crashed and burned on false allegations of plagiarism. Writing for
The Inquisitor
may not be glamorous or noble, but it was honest work. And she took it seriously. Journalism, all journalism, was about commitment and, most importantly, talent.

Most recently, she’d been researching what she considered credible claims of a werewolf living in or around the coniferous forests of northern Minnesota. The National Parks Service confirmed that there are several species of wolf native to that general area, but the size of the one reported being seen in or near Chengwatana Forest was unusual. Maggie was intrigued. There were no reports that this particular wolf had ever been spotted with a mate or a pack, there’d been no sightings during the day, he’d been seen in the area for at least ten years, and there was no sign of a den. He tended to avoid populated areas, never accidentally roaming onto private lands or bothering with the livestock on the ranches bordering the forest. This particular wolf, if the rumors were true, behaved with what seemed to be very human deliberation. With some basic supplies on her back, Maggie had headed into the dark woods near the lovely if antiquated Trappers’ Cove, determined to be both professional and passionate in her search for a werewolf.

Making a federal park where hunting is strictly forbidden your home was smart for a wolf, Maggie thought to herself as she hiked deeper into the woods. When there was no sight of the road and the sounds of the night were muted by the leaves and moss, she’d found a soft spot up against a tree and set up her mini-camp. Sleeping bag, digital camera, tape recorder, note pads, lots of coffee, energy bars, she mentally checked off her supplies. Oh yeah, nearly forgot, Smith & Wesson, fully loaded. “Should have brought some silver bullets,” she chuckled under breath. Now that she’d removed the unwelcome pine cone, she was ready to hunker down for a long and, she assumed, uneventful night. Maggie was glad she’d checked into the Cove Inn early enough to get a decent nap before sunset.

The forest settled around her as the dark deepened, and Maggie felt a sense of peace wash over her. Small, nocturnal animals went about their business as they became comfortable with her presence in their home. She’d always been comfortable with solitude and silence, two things that made tasks like this one pleasurable instead of a chore, and Maggie quickly lost track of time. Eventually the sounds around her changed. The ambient noises of the small creatures moving through the brush hushed to near whisper. The sudden, eerie, silence caught Maggie’s attention and she listened closer for some indication of what had caused the change. Moments passed before she heard what had quieted the forest. Something large was lumbering through the trees. With an economy of motion, Maggie pulled out her camera and checked her speed and flash.

She saw the fur first, dark, nearly black in the muted moonlight. But it seemed too far above her line of sight to be a wolf. And the townspeople had said that the wolf was gray, not dark. Fear trickled up the back of her neck as the furry blur moved closer and became larger. It didn’t take long for the dark form to pass clearly into Maggie’s line of vision. A bear. Panic welled deep in her throat; she prayed the bear had neither seen her nor caught her scent. She moved her hand slowly toward her pack, toward her gun, when her elbow knocked over the Thermos of coffee. Its roll into the leaves sounded to Maggie like a cacophony of drums, and as she watched, horrified, the bear turned his head toward her. Forgetting to move stealthily, she scrambled for her gun with one hand and fought with the zipper on her sleeping bag with the other.

She cursed and prayed as she tugged at the sleeping bag, but the zipper didn’t budge. The bear advanced on her. She realized he wasn’t fully grown yet, but from her seated position on the forest floor he looked huge. She raised the gun with trembling hands, afraid she’d only enrage the animal in her attempt to protect herself — but perhaps since he wasn’t fully grown, she might be able to inflect enough pain to scare him away. At least long enough to get this damn sleeping bag off and get to her car. Her hand steadied as she took aim, waiting for the bear to get close enough for the gun to be effective but also close enough to hurt her with one well-placed swipe of his massive paws.

“I’m so sorry.” She whispered as her finger flexed on the trigger. Without warning, a gray blur streaked into her path and Maggie instinctively lowered the nose of the gun. A wolf had placed itself between her and the bear. He growled low and threateningly at the bear. The bear grumbled in a loud, grumpy tone. The wolf continued to growl, slowly pushing the bear back until, finally, the bear turned and disappeared back into the night. Though the entire episode had taken only minutes, for Maggie time had slowed. Sweat puddled in the small of her back and her mouth tasted like her palm often smelled after gripping copper pennies for too long.

The wolf was magnificent. His fur was a rich, dark gray. He was taller than any wolves she’d seen at the zoo and the breadth of his shoulders was impressive. She didn’t wonder at the bear’s decision to find his meal elsewhere, but sensed the wolf posed her no threat. Instead, she felt protected.

The wolf turned to her then, his head cocked as though asking a silent question. She had a crazy urge to explain what she was doing in the forest stuck in her ancient sleeping bag. But Maggie gasped instead as she looked into his moss green eyes — eyes that possessed a breathtaking clarity and intelligence. Eyes that assessed her in an entirely too human manner, and, unless she was sorely mistaken, eyes filled with derision. He seemed to look her over dismissively before ambling into the bushes. She heard him settling down a few yards from her, out of sight but not out of reach. She imagined him preparing his bed much as her best friend’s dog did. Circling a favored spot over and over, primping it with the front paws before dropping down to rest. She wondered how long he’d stay there and suspected he’d be there as long as she was. That he’d appointed himself guardian of the woman foolish enough to venture into a bear’s domain.

Maggie knew her thoughts fantastical, wondered if they were the aftereffects of the terror and adrenaline that had left as quickly as they had surfaced. She wondered why she didn’t call it a night — hell, call it a trip and just go home. But she knew that the wolf she’d heard so many stories of, the wolf she was here to write about, was the brave animal that had just faced off against a black bear and was, even now, nearby. She planned to be there come dawn to see if those moss green eyes looked any different staring out at her from the face of a man.

“Shit!” Maggie swore as she shoved the gun back into her pack and picked up her forgotten camera. “Goddamn it! I can’t believe I didn’t get one single picture. Not one.” She heard what she could only describe as a soft, breathy chuckle from the area where she sensed the wolf had settled and, without thinking, furiously whispered back, “Go ahead and laugh, I’ll still be here at dawn, camera ready.”

The forest slowly came back to life as Maggie calmed herself the only way she knew how. By writing. With quick strokes she recalled in print the scene as it had unfolded before her. The absolute terror of watching the bear approach and waiting until he was close enough to hurt her before taking aim. The wolf leaping into the line of fire, both hers and the bear’s, then forcing back the hungry beast in a display of superiority. Even what she told herself she’d imagined seeing reflected in the canine’s eyes and the huff of breath she’d convinced herself was a chuckle.

The adrenaline-fueled writing slowed, and when she scribbled the last word, a weariness swept over Maggie. Before long she was sound asleep, bundled into the threadbare sleeping bag that had nearly cost her life.

Maggie adopted an easy routine in the following days. In the morning she would hike back to her car, drive to Trappers’ Cove, and have breakfast in the diner where she’d collect background from the locals before returning to her room at the Inn. She’d sleep most of the day away and still have several hours for research, interviews and, if needed, restocking of supplies before dusk. Three nights had passed without Maggie having sighted anything more exciting than the occasional rabbit or owl. She was still kicking herself for not having gotten a single picture that first night in the forest, and she silently waited, hoping for a repeat encounter with the majestic wolf who dogged her every thought. This night, like the two before it, she sensed she was being watched.

The Chain Garden by Jane Jackson
A Matter of Forever by Heather Lyons
Homefront by Kristen Tsetsi
Mobster's Angel (Mobster Series) by Rachiele, Amy
Baby Farm Animals by Garth Williams
Murder on the Second Tee by Ian Simpson
The Slime Volcano by H. Badger
An Absent Wife by Oster, Camille
The Accidental Virgin by Valerie Frankel
Trouble with Luv' by Pamela Yaye