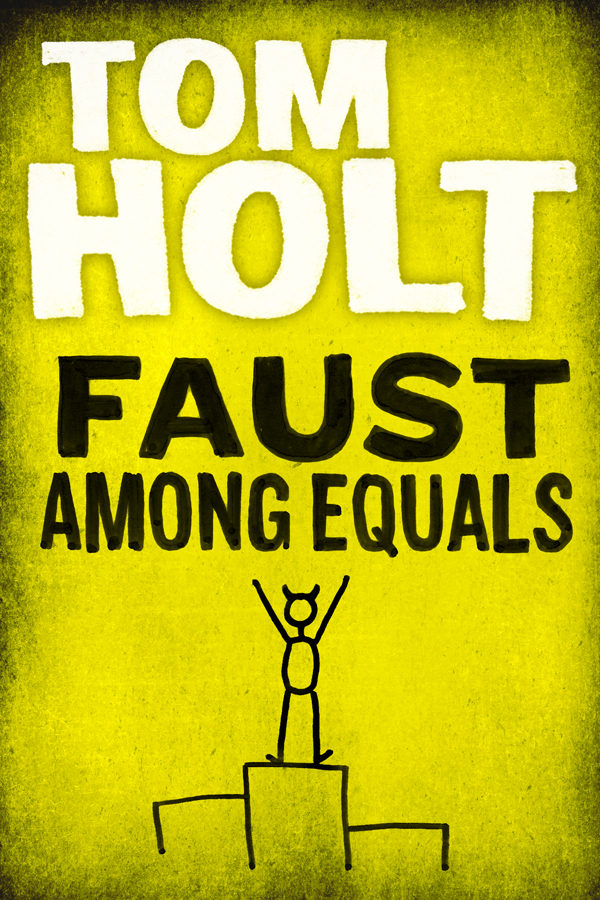 All rights reserved. In accordance with the U.S. Copyright Act of 1976, the scanning, uploading, and electronic sharing of any part of this book without the permission of the publisher is unlawful piracy and theft of the author's intellectual property. If you would like to use material from the book (other than for review purposes), prior written permission must be obtained by contacting the publisher at [email protected] Thank you for your support of the author's rights.

Orbit is an imprint of Hachette Book Group. The Orbit name and logo are trademarks of Little, Brown Book Group Limited.

The Hachette Speakers Bureau provides a wide range of authors for speaking events. To find out more, go to
www.hachettespeakersbureau.com
or call (866) 376-6591.

Also by Tom Holt
Expecting Someone Taller
Who's Afraid of Beowulf?
Flying Dutch
Ye Gods!
Overtime
Here Comes the Sun
Grailblazers
Faust Among Equals
Odds and Gods
Djinn Rummy
My Hero
Paint Your Dragon
Open Sesame
Wish You Were Here
Only Human
Snow White and the Seven Samurai
Valhalla
Nothing But Blue Skies
Falling Sideways
Little People
The Portable Door
In Your Dreams
Earth, Air, Fire and Custard
You Don't Have to be Evil to Work Here, But It Helps
Barking
The Better Mousetrap
May Contain Traces of Magic
Blonde Bombshell
Life, Liberty, and the Pursuit of Sausages
Doughnut 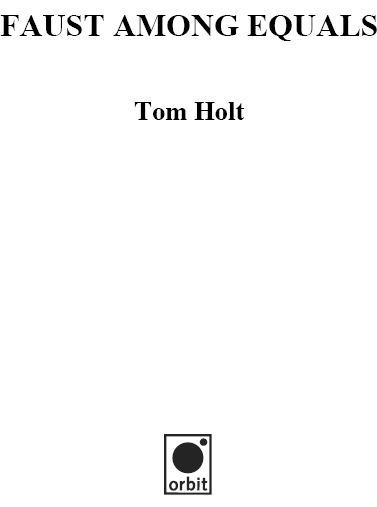 T
he Laughing Cod in downtown Hlidarend is rated as one of north-east Iceland's premier restaurants. Or one of north-east Iceland's restaurants. In practice, it amounts to the same thing.
On the three hundred and sixty-four days each year when the Laughing Cod isn't being a restaurant, you can still walk in to the bar and order a coffee; and this is precisely what the Most Wanted Man in History did.
Six of the seven regulars turned and stared at him as he did so; the seventh, Wall-Eyed Bjorn, just carried on complaining about herring quotas.
Torsten Christianssen, the ever-popular proprietor of the Cod, poured the coffee, waited for it to settle, and leant back against the cash register, soaking in the thrill of a new experience.
âJust passing through, are you?' he asked after a while.
The newcomer looked up. âYou could say that,' he replied, with only the very faintest trace of an unfamiliar accent. âCould you fix me a toasted sandwich, while you're at it?'
âSure,' Torsten said. âComing right up.' He withdrew into the kitchen, wondering what the hell he was doing. It was theoretically possible to get a toasted sandwich in the Cod, but you needed references from two doctors and a justice of the peace before your application could even be considered.
When the stranger had eaten his sandwich, drunk his coffee and spent about forty-five seconds studying the framed photograph of Einar Sigfussen's record grayling on the wall opposite, he stood up and asked for the bill.
âThe what?'
âThe bill,' repeated the stranger. âPlease.'
âOh, yes, right. Coming right up. Anybody here got a pencil or something?'
There was a brief, stunned silence, which was resolved when the stranger unclipped one from his top pocket and handed it over. Torsten took it as if it was red hot, and tentatively pressed the top.
âHow do you spell coffee?' he asked.
The stranger told him; then took the paper from his hands, glanced at it, and fished a banknote out of his shirt pocket. A ten-thousand kroner note.
âHey,' said Torsten, when God's marvellous gift of speech had been restored to him. âYou got anything smaller?'
The stranger looked at him, took back the note and put it down on the counter. Then he smiled at it.
It began to shrink.
You couldn't say how it did it; it just gradually occupied less and less space, until eventually it was about the size of a postage stamp. The stranger picked it up, blew on it, and passed it back across the counter.
âIs that better?' he asked.
Â
On the other side of Death, there is a tunnel, leading to an archway. Then the road forks, and this is the point at which you find out whether the ethical system you've been following all these years was the right one after all.
If you've backed the Betamax version, you'll come at last to a rather impressive black stone gateway. There is no name or street number, but the chances are that you'll have guessed where you are anyway. However, by way of a heavy hint, the gateway bears the celebrated inscription:
ABANDON HOPE ALL YE WHO ENTER HERE
- or so your Michelin Guide would have you believe. It's very possible that it still does, but you can no longer see for yourself, because the whole of the architrave of the gateway is now covered with a huge banner, on which is painted the legend:
UNDER NEW MANAGEMENT
- and when you get up really close, you can see that it actually says:

- just to ram the point well and truly home. At this juncture, you will be met by your guide, who will escort you to the ticket office (where you can also purchase guide books, souvenir pencils and locally-made coconut ice). The Michelin Guide doesn't mention that; but if you think about it, how would they know, anyway?
Once you've passed the ticket office, your tour will take you all round the justly celebrated architectural gems that comprise the inner courtyard, with the exception of the Council Chamber, which is not yet open to the public. This is a pity because apart from the Michelangelo floor (remember where we are) the Chamber houses three late Veroneses, a rather fine set of DÃ¼rer engravings and, naturally, the finest collection of works by Hieronymus Bosch in the universe. They are, of course, all portraits, such as may be found in the boardroom of any long-established corporate body.
On the day in question, the Council was in session, and had been for sixteen hours. The Council members (or Board of Directors, as we must call them now) each sat under his, her or its respective portrait, each one looking just the same as he/she/ it had when Ronnie Bosch had painted them six hundred years previously; except that they were all wearing, somewhat self-consciously, identical red T-shirts with the words:
HAVIN' A DAMNED GOOD TIME
printed on them in big white letters.
âI still reckon we haven't thought this thing through properly,' said the Production Director stubbornly. He'd opposed the whole idea of a management buy-out from the start, and had only come in with the rest of the consortium under considerable pressure.
âListen, Harry,' replied the Sales Director, lashing his tail irritably. âWe know what you think, so you stick to keeping the ovens going and we'll all get along just fine. You leave the management side to the grown-ups, okay?' For the record, he'd been the one applying the pressure, with a pitchfork, in the small of the Production Director's back.
âActually,' interrupted the Admin Director wearily, âHarry has got a point there, of sorts. I mean, it's one thing getting the blasted franchise. Keeping it's a different crock of entrails entirely.'
The Sales Director scowled, displaying a wide selection of unlikely components. âAll you can do is make problems,' he complained. âWe're running a
business
now, people. I suggest we all remember that, okay?'

Rare Find by Dale Mayer
Jungle Fever Bundle by Hazel Hunter
The Story of Dr. Wassell by James Hilton
Elisabeth Fairchild by Provocateur
Big City Jacks by Nick Oldham
Frey by Wright, Melissa
Beautiful to Me. by G. V. Steitz
The Sun Is God by Adrian McKinty
The Guardians of the Halahala by Shatrujeet Nath
The Cavendon Women by Barbara Taylor Bradford