Read Fear in the Cotswolds Online

Fear in the Cotswolds 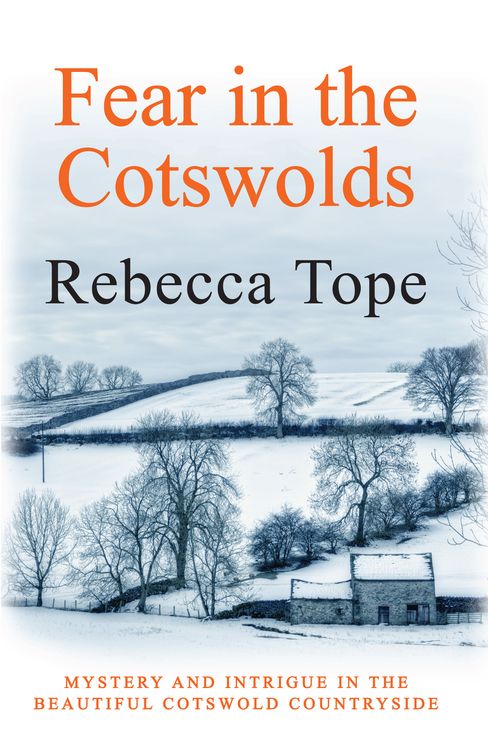 Fear in the Cotswolds

It was much smaller than a village – a hamlet, then. Hampnett was a hamlet. Thea played with the words as she drove along the A429 watching for the sign that would take her to her latest house-sitting commission. The bare trees that dotted the landscape, along with the short colourless grass, created a whole different world from the Cotswolds in their summer lushness. Now the palette was all greys and browns, as the low January cloud sapped light and clarity from the scene. It fitted her mood alarmingly well. After a dutiful Christmas and New Year spent with her recently widowed mother and an assortment of other relatives, she felt as
drained as the surrounding countryside. The past months had been gruelling in a number of ways – the death of her father, the ending of her relationship with Phil Hollis, and a very difficult time with her older sister, Emily. She was ambivalent about the forthcoming house-sitting commission, which involved a month in this isolated little place, in the depths of winter.

The tops of the round hills were indistinct, misty with the damp vapour settled on them. Shapes with fuzzy edges came and went along the roadside, as the small car climbed the gentle incline towards its destination. As always, the sheer unpredictability of what lay ahead of her was both enticing and unsettling. But this time there was a new element: an unwelcome feeling of apprehension. If it hadn’t been so foreign to her nature, she might almost call it fear. An insistent tightening of her insides, a faster-than-usual heart rate, a dryness in her mouth – her body was telling her that it was uneasy, however strenuously she tried to ignore it, and however irrational it might be.

Hampnett had two approaches: one from the A40, which ran roughly east–west; the other from the A429, which crossed at an angle, south-west to north-east. The hamlet sat in one niche made by the intersection, to the west of it. At least,
that was how it looked on the map. In reality, all awareness of the main roads disappeared within seconds, once you’d left them behind. Thea had experienced before the sense of passing through an invisible curtain into a different universe, as she approached a hidden Cotswold settlement. Temple Guiting, Cold Aston, Duntisbourne Abbots, and dozens of others, were all tucked away behind folds of land, invisible from any thoroughfares and almost forgotten even by tour leaders and walking groups. But Hampnett was closer to the bustle and security of the twenty-first century than most. It would be a ten-minute walk from the church to the A40, twenty minutes to the other road. The town of Northleach was almost within shouting distance. Yet another road ran Roman-straight to the west, only a few fields away.

So why, she asked herself, with a questioning glance at the spaniel beside her, did it feel so very remote?

Lucy Sinclair had been shameless in her explanation of why a house-sitter was required. ‘I’ve got to an age where English winters are intolerable,’ she said. ‘So I’m going off to the Canaries for a month.’ Her cat, donkey and five lion-headed rabbits all needed somebody on the premises, it seemed.

It turned out that they were fairly ordinary rabbits with a lot of fur in the head area and quite short ears. They were four does and a buck, of assorted colours and sizes – and surprisingly appealing. Lucy plucked one from its palatial quarters and thrust it into Thea’s arms. ‘This is Jemima. She’s very friendly. They all are, except Poppy. She scratches rather.’ The buck, named Snoopy, had his own cage, and sat looking somewhat sulky. Thea stroked Jemima, who was a blue-grey colour, with a frosting of a lighter grey.

‘You should feel Snoopy. He’s a monster.’

Thea liked Lucy. In her late fifties, she was divorced and self-employed. ‘I fix people’s computers,’ she said, briefly, with a sideways look at Thea. ‘The last bastion of male supremacy, for some reason.’

More relevantly, Lucy’s mother had died a year ago, leaving a substantial property for her daughter to inherit and sell for an astonishing figure. ‘Quite against the trend,’ she laughed. ‘Plus I get the state pension in another couple of years. I’ve never felt so rich, even when my ex was raking it in, in the Eighties.’

The rabbits seemed an anomaly, even more
than the donkey did. ‘It’s a long story,’ Lucy had laughed. ‘To do with my daughter and an allergic boyfriend.’ She rolled her eyes and sighed. ‘I knew it would happen, right from the start. Kitty got Snoopy first, before all the does, and I fell for him the minute I saw him. He’s getting on a bit now – you will take good care of him, won’t you?’

But it hadn’t been the rabbits or the cat or the donkey that Lucy was primarily concerned about. There was an even greater reason for spending fifteen hundred pounds on a house-sitter. Leading Thea through the house to a conservatory at the back, she grimaced ruefully before opening the door. ‘It breaks my heart to leave him,’ she said. ‘After the life he must have had, it’s the last thing he needs.’

A skeletally thin grey dog was curled on a bed in a corner of the room. Tufts of hair barely covered the skin. A ratty tail flickered as he lifted his head to gaze questioningly at Lucy. ‘Hello, Jimmy,’ she crooned. ‘This is Thea. She’s going to look after you when I go away next month.’ Thea reached down her hand for the animal to sniff. Politely, he touched it with his cool nose.

‘That’s what I named him. I don’t know what he was before. I found him at the side of the road, two years ago. He’s not as old as he looks.
He’s a lurcher, so he’s meant to be thin. But his wits have gone. He’s not going to get any better now.’

Oh God
, Thea groaned inwardly. Just when it had been looking reasonably easy, this scrawny glitch had to gum up the works. ‘Will he be all right with my spaniel?’ she asked.

‘He’ll ignore her. He doesn’t have any problem with other dogs. It’s people who’ve betrayed him.’ Lucy stared angrily at the dog. ‘Has it occurred to you that the whole thing between humans and dogs is about betrayal?’

Thea had heard a news report, only that morning, in which the soaring numbers of abandoned dogs had been presented as a sign of harsh economic times. Unable to meet their mortgage payments unless they made serious savings, people were giving up the dog – dumping it in rescue centres, for the most part. What must the poor creatures think – ousted from their beloved family, through no fault of their own, with no warning? ‘Yes,’ she said. ‘That had occurred to me.’

‘And yet I’ve met people who’d go without food themselves in order to make sure the dog or cat’s all right. The very idea of abandoning the animal is unthinkable.’

‘Right. Those are always the people one
knows, aren’t they? It’s always some faceless moron from the city who doesn’t know how to make a commitment, who quits when things get a bit rough.’ If possible, Lucy’s expression grew even angrier. ‘But that’s rubbish.
Everybody
would do it. The difference is in the justifications they give. That’s not important to the dog, is it?’

‘Devoted old ladies break their hips, or die,’ said Thea mildly. ‘They’re forced to give up their dog then.’

‘I know that. But it still feels like betrayal when you’re on the receiving end. Don’t you see?’

It was too much for Thea. She held up her hands in surrender. ‘So what’s the answer?’ she said. ‘Nobody should ever have a dog or cat, by that reckoning.’

‘And then there wouldn’t
be
any dogs or cats.’

The smile finally came, as Thea had trusted it would. ‘So take good care of Jimmy for me, will you? Make sure there’s always something that smells of me in his bed. Don’t let him run away.’

Recalling a previous experience, Thea shuddered. ‘No, I won’t let him run away,’ she promised.

The house was isolated, down a lengthy track that ran alongside a small copse, half a mile before the centre of the hamlet. Hampnett
consisted essentially of a remarkable church and a farm, with a handful of other stone buildings scattered over the rolling ground to the north and west. Lucy Sinclair was the proud owner of a converted barn with three acres of land. The conservatory was a carefully designed addition, with no embellishments that might be deemed out of keeping with the local style. ‘I bought it twelve years ago, and oversaw the conversion myself. It would never suit anybody but me.’ Where most people had created huge airy spaces inside their mutated homes, Lucy had chosen to divide it into five or six modestly sized rooms. ‘Easier to heat,’ she said. ‘And who wants to feel as if they’re living in a barn?’ A lot of people, Thea could have replied.

Now, on 6
th
January, Thea arrived nearly two hours before Lucy had said she would have to leave for Birmingham airport. Being in charge for almost a month was by far the biggest commitment she had made since she began the work. It hadn’t seemed nearly so demanding to watch over a homestead for a week or two – although she had experienced too many difficulties and alarms during most of her commissions to be complacent.

Jimmy seemed even more decrepit than before, still huddled in his conservatory and showing
very little interest in whatever might be going on around him. ‘He doesn’t like the cold,’ Lucy explained. ‘But he’s not happy in any other room than this. I think he must have spent his life outdoors. He gets agitated in the house. I built this specifically for him, but it’s not very easy to heat.’ Thea stared at her, open-mouthed. She built the addition for the dog? Was that possible?

‘He looks comfortable enough, and besides, winters aren’t as bad as they used to be,’ said Thea optimistically. ‘His bedding looks very warm.’

‘It’s felt,’ Lucy explained. ‘They use it in Mongolia, so it’s probably going to do a good job. I gather they’ve had massive snowfalls in New York this week, though. It often seems to get here a fortnight later.’

‘Lucky the main road’s so close, then,’ said Thea.

‘First get up my track. Even a quarter of a mile’s a lot of digging,’ Lucy laughed. ‘But I’ve filled the freezer with bread and milk and plenty of basics, so you should be OK.’

It felt like a joke at the time. Thea shared the laughter at the idea of being snowed in. That never happened in Gloucestershire, did it?

Killer in Crinolines by Duffy Brown
i f38de1664e17c992 by Your User Name
Banksy by Will Ellsworth-Jones
Coto's Captive by Laurann Dohner
A Score to Settle by Kara Lennox
The Curse of the Pharaohs by Elizabeth Peters
The Irish Duke by Virginia Henley
Shadows Gray by Williams, Melyssa
The New Year's Party by R.L. Stine
The Billionaire's Heart: Billionaire Brothers (Tycoon Billionaires Book 0) by Farrell, Julie