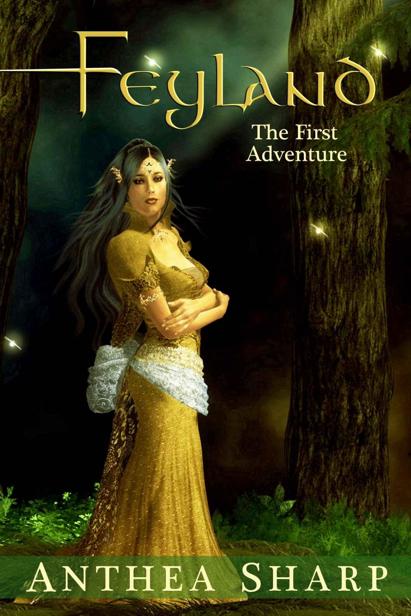 A prequel story to the FEYLAND Trilogy

This is a work of fiction. Names, characters, places, and incidents are the product of the author’s imagination. Any resemblance to real events or persons is purely coincidental.

Copyright 2013 Anthea Sharp. All rights reserved. Visit the author at
www.antheasharp.com
and sign up for her mailing list, Sharp Tales, at
https://tinyletter.com/AntheaSharp
for news of upcoming releases and a free story!

Thank you to my CP, beta-readers, and keen-eyed editors: Peggy, Chassily, Marissa, Laurie, Ginger, and Brynn.

QUALITY CONTROL: If you encounter typos or formatting problems, please contact
[email protected]
so they may be corrected.

High-tech gaming and ancient magic collide when a computer game opens a gateway to the treacherous Realm of Faerie.

Jennet Carter never thought hacking into her dad’s new epic-fantasy sim-game would be so exciting… or dangerous. Behind the interface, dark forces lie in wait, leading her toward a battle that will test her to her limits and cost her more than she ever imagined.

J
ennet Carter sneaked into the computer room, her heart beating too loudly in the stillness. She closed the door, holding her breath until the lock clicked solidly home. It was silly, being so nervous in her own house, but still. She didn’t want any of the staff walking in on her while she hacked her dad’s new sim equipment.

She padded across the plush carpeting to the prototype version of the FullD system, and ran her hand over the smooth curve of the sim helmet. The room lights reflected off the visor like miniature stars.

The most immersive gaming equipment ever designed was
here
, in their house—had been for two weeks—and so far all she’d been allowed to do was run around on grids and jump off blocky gray squares. Her dad wasn’t the best player, despite being lead project manager on the FullD, so he let Jennet gear up while he took notes for the programmers. It was kind of fun, in a boring way. At least she got a chance to learn how to use the sim gear.

Then, last night, she’d noticed a new icon as she logged on; an
F
made of scrolled golden flame.

When she asked Dad about it, he’d made some weak excuse and hustled her off the system. Luckily, she knew his password. He hadn’t changed it in three years. She should say something. But then, how would she be able to access the stuff he didn’t want her to see?

Jennet hit the power button and slid into the sim chair, cushioned in fresh-smelling black faux leather. She donned the helmet, then pulled on the gaming gloves. The embedded LEDs winked at her as the system powered up, the sensor nodes on the gloves glinting like precious jewels: amethysts, rubies, emeralds.

At the loading interface, she lifted her finger and selected the new, flame-colored icon.

Haunting, mysterious music played through the helmet, and anticipation tingled through her. What was Dad hiding? What amazing new game was VirtuMax developing to go with their new technology?

Words appeared across the black background of the visor:

The letters glowed golden, then deepened to crimson as flames flickered along the sides. The music rose, and the words whirled up into a flurry of leaves the color of ashes. Behind them… Jennet blinked, a chill running through her. Was that a pair of eyes, gleaming from the shadows?

If the programmers were trying to create an eerie opening, they’d definitely succeeded.

The shivery feeling lingered, even as the standard character-creation interface popped up. She scanned the limited options: Knight, Spellcaster, or Bard. It didn’t take long to read the descriptions and make her decision. She always liked being a magic-user in other games, so it was a no-brainer to choose Spellcaster.

Judging by the lack of options in the character menu, this was a very rough draft of the game. Jennet chose blue eyes and blonde hair—her own coloring. Her new character wore long blue robes and carried a magical-looking staff with a glowing crystal set in the end. She hoped she wouldn’t end up running her avatar through more featureless gray landscapes—that would be a serious disappointment.

She tipped her thumb up, the universal glove command for yes.

Dizzying golden light enveloped her senses, and she swallowed. Whatever the programmers were experimenting with, it made her feel queasy. She wished could share her reactions and feedback with Dad. But she couldn’t tell him she was using the prototype equipment without his permission.

For once, she was glad he was such a workaholic. As long as she logged off in time, he’d never know she’d been accessing Feyland.

The golden light cleared, and Jennet found her avatar standing in a grassy clearing surrounded by white-barked trees. She stood in the exact center of a ring of pale mushrooms that glowed like the moon. The sunlit grass under her feet was springy and soft, and she swore she could feel the wind against her face.

Wow. The developers had done a ton of work with the immersion software. This was nothing like the primary simulations Dad had her running around in. This world felt
real
. A faint, spicy scent tickled her nose—the smell of herbs and warm grasses. Jennet breathed in deeply, and smiled.

A breeze riffled the leaves, their undersides flashing silver, and birdsong lilted through the air. On the far side of the clearing, a fern-draped path beckoned. Taking a firm grip on her staff, Jennet jumped over the circle of mushrooms and started forward in search of adventure.

T
he Dark Queen reclined on her throne of tangled branches, stars snared in her midnight hair. Her dress was made of moonlight and shadows. Around her the denizens of the Dark Court thronged, fey eyes glittering. Twig-limbed creatures crouched beside the throne, flanked by gossamer-winged maidens. Beneath the dark trees, hounds with glowing red eyes paced back and forth, held in check only by their antler-helmed master.

A goblin approached the throne. Trembling, he bowed and swept off his blood-red cap, keeping his gaze averted from the terrible beauty of his ruler.

“What news?” the queen asked, in a voice colder than winter ice.

The goblin bowed even lower. “A human presence has been sensed at the edge of the Realm.”

The Dark Queen stood, her eyes deep as night-dark pools. Her long, pale fingers curled eagerly at her sides.

“Another human? Tell me everything.”

“My queen—I know little.” The goblin shivered, clearly hoping his lack of knowledge would not prove his death. “It is a female, younger than the man….”

He hesitated. The queen did not take kindly to reminders of her failure.

The Dark Queen slashed the air with her hand. “Go on.”

“A mortal girl. She is being watched.”

“A young one.” The queen smiled, a sharp, dreadful expression on her inhuman face. “Bring her to me, but carefully. We will make no mistakes with this one.”

On shaking limbs, the goblin scuttled away. He did not dare turn his back on the Dark Queen, or the avid, feral members of her court. As a redcap goblin, he was vicious—but one redcap alone was no match for the creatures under her command.

At last, reaching the edge of her court, he turned and fled; past the eerie violet-hued bonfire where figures capered around the flames, past the high, keening laughter of a banshee, past the forbiddingly still figure of the Huntsman, his antlered head silhouetted against the late sky.

The Third Throne: Angel of Darkness by Tabitha Barret
All or Nothing by Dee Tenorio
The Graveyard Game by Kage Baker
Alone on the Wall: Alex Honnold and the Ultimate Limits of Adventure by Alex Honnold, David Roberts
Neverwylde (The Rim of the World Book 4) by Linda Mooney
Hunks Pulled Over by Marie Rochelle
Viking Warrior by Connie Mason
Be Good by Dakota Madison
All Creatures Great and Small by James Herriot
Fast and the Furriest by Celia Kyle