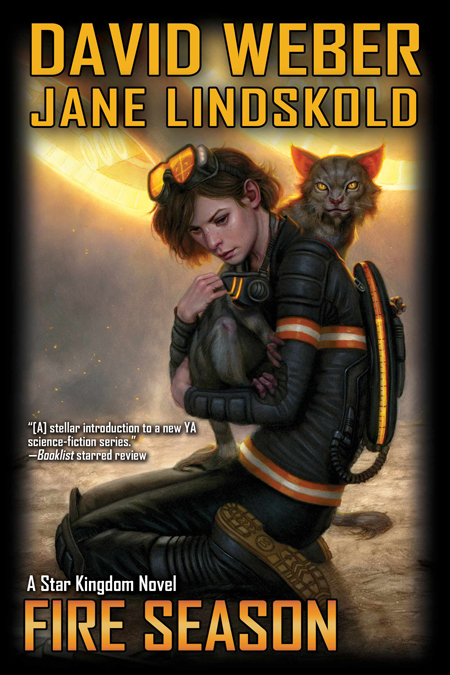 IN THIS SERIES BY DAVID WEBER

The Honor of the Queen

Crown of Slaves,
with Eric Flint

Torch of Freedom,
with Eric Flint

Storm from the Shadows

In the Service of the Sword

For a complete listing of Baen titles by David Weber, please go to www.baen.com.

Climbs Quickly’s two-leg was up to something she shouldn’t be doing…again.

The emotions surging through her mind-glow made
it
perfectly clear. And it was just as clear that she knew her elders would have disapproved strongly. But Death Fang’s Bane had a true gift for bending rules, and she was having a grand time.

Climbs Quickly leaned forward in his seat, watching intently as the “air car” (or “car”—a sound so very like “Karl” that the similarity had confused him for quite a time) sped along a complex path through the maze of tree trunks among which they traveled.

Climbs Quickly couldn’t quite figure out what precisely was the source of Death Fang’s Bane’s excitement. True, the air car in which they were traveling was moving very quickly—and sometimes rather erratically—but that didn’t seem to be excuse enough for the surges of excitement and dread coming to him through their shared link.

The folding flying thing in which they had more routinely traveled before this new fascination had gripped his two-leg was far more erratic. Yet, unless the weather was particularly bad, Death Fang’s Bane didn’t react this strongly to piloting her folding flying thing.

The treecat thought a bit wistfully about the folding flying thing. He preferred it to the air car in which they were now traveling. The feeling of the wind on his fur was delightful and the winds carried such interesting scents. Also, the glider
felt
faster somehow. He’d figured out that the air car actually covered distances more quickly, but with the winds closed away, the sensation of speed simply wasn’t the same.

A touch forlornly, Climbs Quickly pressed his remaining true-hand against Death Fang’s Bane’s shoulder, then used his left hand-foot to indicate the air car’s closed side. From past experience, he knew the transparent panels here could open—although he hadn’t quite figured out how to manage the opening himself.

To emphasize his request, Climbs Quickly made a small sound of pleading protest. In the time that he’d lived with Death Fang’s Bane and her family, he’d learned how much emphasis humans placed on mouth noises. The People relied on mind-speech, using sound and gesture to provide emphasis. These alien two-legs, by contrast, seemed to have no equivalent to mind-speech, relying instead on complex mouth noises augmented by a bewildering variety of gestures—gestures that didn’t seem to mean the same thing from occasion to occasion and could be eliminated completely.

He pitied them, for their mind-glows were brilliant and warm. It seemed sad that even two good friends like Death Fang’s Bane and Shadowed Sunlight could not share them.

“Bleek!” Climbs Quickly repeated. Then, when Death Fang’s Bane didn’t acknowledge him, he extended his claws and struck them against the clear panel, making a noise like hail hitting rock. “Bleek! Bleek!”

When he felt Death Fang’s Bane gust out her breath, then chuckle, Climbs Quickly tapped the transparent panel again, just in case she’d missed the point.

“Hands on the controls!” snapped Karl Zivonik. “Stephanie! I’m taking enough of a risk letting you fly without a permit. You want to wreck us and get my license pulled?”

“Sorry,” Stephanie replied with uncharacteristic meekness. She knew perfectly well the risk Karl was taking. If they were found out, losing his license would be the least of the penalties. “Lionheart wants a window open. Since I’m flying low and pretty slow, I think it’s okay.”

She couldn’t see Karl rolling his eyes, but she guessed at the expression even as he emitted a gusty sigh and turned to address the treecat directly.

“Back window,” he said to Lionheart, pointing for emphasis. “Stephanie has enough distractions without you leaning over her shoulder and the wind blowing her hair in her face.”

One of the things Stephanie liked about Karl Zivonik was that he was among the small handful of humans who addressed Lionheart as if the treecat was intelligent enough to understand him. Most humans either didn’t bother to talk to the treecat, or, if they did, they adopted the syrupy tones they used to address very small children—or pets. More annoying were the handful who seemed to think that if they spoke very slowly and used very simple phrases the treecat would understand.

Stephanie supposed this last bothered her so much because it was actually probably the best approach, but those who used it didn’t employ a consistent and scientific approach.

Karl pushed a button. As the back left side window slid down, the air car swerved slightly. Stephanie corrected, but overdid it—in part because Lionheart had just removed his weight from her shoulder—and she was off-balance.

“Steph!” Karl turned the single syllable into reprimand and protest in one.

She scanned the control panel: direction indicator, elevation, engine temperature, fluid levels. There was so much to keep track of. Worse, unlike with the hang glider, where an accident meant some busted struts and fabric (and if she wasn’t careful, some busted Stephanie, as she remembered all too vividly), here she might damage expensive equipment.

Worse, Karl didn’t own this air car. At sixteen T-years, he had dreams of owning one, had even admitted that he was saving towards a used model, but this air car was “his” only because he needed to get to his job as a provisional ranger with the Sphinxian Forestry Service. His parents considered use of the car fairly compensated by the time they saved shuttling Karl back and forth from Thunder River, which was about a thousand kilometers away—an investment of a couple hours each way, even at the speeds an air car traveled.

Since Karl and Stephanie were the only probationary rangers in the Sphinxian Forestry Service, they were regularly assigned to work as a team, allowing only one ranger’s time to be taken up with supervising them. Since Stephanie couldn’t pilot, this meant that usually they worked in the vicinity of Twin Forks, the town nearest to the Harrington freehold and where Richard Harrington had his veterinary clinic. There was plenty of room in the Harringtons’ sprawling stone house, since Stephanie’s parents definitely planned on additional children. That was one of the reasons they’d emigrated from their heavily populated homeworld of Meyerdahl, and Stephanie was looking forward (guardedly) to the novel experience of siblings. In the meantime, Karl often stayed with the Harrington family, taking advantage of all that currently unoccupied space, although sometimes he stayed with friends in Twin Forks.

They were coming into an area where the forest giants were more widely spaced, so Stephanie hazarded talking in addition to piloting.

“I think I’m getting better,” she said, “but I’ll admit, I never thought handling an actual air car on ‘manual’ would be so hard. I mean, I was getting perfect scores on the simulator, even in the ‘auto-pilot-off’ setting.”

“Wonder-girl,” Karl retorted with a grin. “You always get perfect scores on everything. If you hadn’t, I would never have let you try this. Reality is different than a simulator. What I don’t understand is why you can’t wait until you have a learner’s permit like everyone else. Your fifteenth birthday isn’t that far off.”

Stephanie was glad that concentrating on piloting gave her an excuse to pause before answering. She knew she tended to “push.” Only lately had she tried to figure out why. It wasn’t as if her parents didn’t love her or expected her to win their approval. If anything, Richard and Margery Harrington were almost too approving, too fair, too balanced.

They’d let Stephanie know—gently and in small increments—that she had advantages most people did not. For one, although they’d tried to hide this from her lest she get either lazy or smug, Stephanie knew her IQ scored nearly off the charts. Karl’s statement that she always got perfect scores on everything was only a slight exaggeration.

For another, Stephanie was a “genie,”—her genetic mutations making her stronger and tougher than average. She paid for these advantages with a higher than usual metabolism, but given that Mom and Dad always made certain there was ample interesting stuff to eat—they shared her metabolism, after all—she never suffered for this. What she did suffer from was the flashes of hot temper that came with the package. She simply didn’t get along easily with most people—especially people her own age. They seemed dumb, fascinated with things she wasn’t in the least interested in.

Karl Zivonik—who was over a T-year and a half older than her—was the closest Stephanie had to a friend her own age, the first she had made since her family emigrated to Sphinx from Meyerdahl a bit over four T-years ago. Even Karl was more like a big brother than a friend, watching over her, scolding her, teasing her, practicing target shooting with her, and, well, letting her fly his car, even though it was against the rules.

However, despite the amount of time they spent together, Stephanie still felt there was a lot she didn’t know about Karl. At times he’d fall into a brooding silence or snap at something she didn’t think was all that bad. From Karl’s aunt, Irina Kisaevna, Stephanie had learned that much of Karl’s family and many of his friends had died during the Plague. Stephanie guessed that probably had something to do with his moods, but she sensed there was more. Occasionally, someone named “Sumiko” would get mentioned—usually by one of Karl’s host of younger siblings—and there would be this uncomfortable quiet.

Anyhow, despite the amount of time she’d been spending with Karl, Stephanie’s best friend was Lionheart.

I mean, look at him, now,
she thought affectionately, glancing into the rearview mirror to do so,
hanging out the window like some cross between a gray-and-cream floppy toy and a six-legged weasel. No one would ever guess how smart he is.…

At long last, Stephanie answered Karl’s question, “I don’t want just a learner’s permit. You know as well as I do that you can qualify for a provisional license at fifteen.”

“At need,” Karl said. “You can get a provisional license ‘at need.’”

Ancient Guardians: The Uninvited by S. L. Morgan
The White Wolf by Ron Roy
Born in Chains (Men in Chains) by Roane, Caris
Murder in Piccadilly by Charles Kingston
To Love and Trust (Boundaries) by Swann, Katy
If Kennedy Lived: The First and Second Terms of President John F. Kennedy: AnAlternate History by Greenfield, Jeff
Last Reminder by Stuart Pawson
What the Dog Knows by Cat Warren
Desert Rising by Kelley Grant
Act of Evil by Ron Chudley