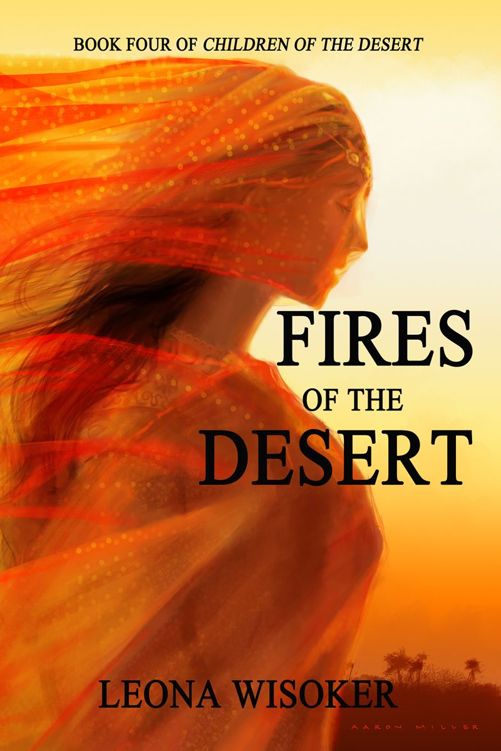 Praise for
Children of the Desert

“The final product put me in awe of where the world-building skills of Wisoker are at this early stage of her career...reminiscent of something out of an Ursula K. LeGuin novel in detail and complexity. Wisoker, like the best authors of this genre, has created a completely original society upon which to tell her story.”
—SF Site

”An absorbing story, a unique world, and fascinating characters. Leona Wisoker is definitely a writer to watch!”
—Tamora Pierce

”...a lushly visual and highly detailed world of desert tribes, a language of beads, and a unique way of viewing the world.”
—Library Journal

“Leona Wisoker is a gifted storyteller and in
Secrets of the Sands
she has succeeded in crafting a refreshingly unpredictable tale set in a stunningly rich and detailed world.”
—Michael J. Sullivan, author of the Riyria Revelations series

”For its complexity, intriguing story, and (as in the first volume) for its characters I find totally fascinating, I heartily recommend
Guardians of the Desert.”
—SF Revu

”A storyteller with a good deal of promise. Give this one a try.”
— CJ Cherryh

“You realize it’s been too long sine you’ve read a Leona Wisoker novel the moment you pick up a new one and begin reading. Momentarily overwhelmed by the staggering amount of pages and the density of the copy, you are immediately drawn in by the writing and, within a few pages, you are already regretting that a book which seemed so large now suddenly appears depressingly short. Thank the gods there is a fourth on the way already. A world without new fiction from this talented scribe is simply a world too sad to contemplate.”
—C.J. Henderson

“With a flair for evoking exotic locales and an eye for detail, Leona Wisoker has crafted a first novel peopled by characters who are more than they first seem. From the orphaned street-thief who possesses an uncanny ability to read situations and people, to the impetuous noblewoman thrust into a world of political intrigue, Wisoker weaves a colourful tapestry of desert tribes, honour, revenge, and an ancient, supernatural race.”
—Janine Cross, author of the Dragon Temple Saga

“Wisoker makes a praiseworthy work when it comes to world building, creating with care and without haste a strong world, one piece at a time...another unique element of the story which...certainly will be developed more in the series’ next novels.”
—Dark Wolf’s Fantasy Reviews

FIRES OF THE DESERT

Other books by Leona Wisoker:

Secrets of the Sands

Guardians of the Desert

Bells of the Kingdom

This ebook is licensed for your personal enjoyment only. This ebook may not be re-sold or given away to other people. If you would like to share this book with another person, please purchase an additional copy for each person. If you're reading this book and did not purchase it, or it was not purchased for your use only, then please purchase your own copy. Thank you for respecting the hard work of this author.

This is a work of fiction. Any similarity to real persons, living or dead, is coincidental and not intended by the author.

For my mom, who stuck with me through it all.

Praise for Children of the Desert

Children of the Desert series

Children of the Desert series

This book, as with all my books, could not have been written without a wide network of support and encouragement. I’ve gone into great detail on names and reasons, in the Acknowledgements of previous volumes, so this time around, I’ll just say: ditto to all of it, and ten times on the gratitude.

I still consider myself very lucky to have found a home under Mercury Retrograde Press’s wing, and to have the marvelous artwork of Aaron Miller and Ari Warner gracing my novels.

Thank you to each and all, and may the adventure continue to unfold for all of us!

The small candle flame went out without warning, leaving Alyea in complete darkness. In the silence, her own breathing seemed loud in her ears, and her sweat stung her nose, pungent and sour.

Midnight-chill air currents flowed around the edges of the shuttered window. She shivered, sweat cooling to icy unease; a warm breath on the side of her face did nothing to reassure.

“See it lit,” Deiq said in her ear, his low voice as dark as the room around them. His presence warmed her back and legs.
“Know
it’s lit.”

Alyea drew a deep breath, closed her eyes, and tried to remember what a lit candle looked like. Deiq’s presence behind her was a distraction; she had a sudden recall of his hands sliding over her skin—had it been only hours ago? She shivered again, but not with chill this time.

He sucked in a sharp breath, his hands closing around her shoulders. “No problems with your
memory,
at least,” he muttered. His fingers dug in, then relaxed, amusement returning to his tone. “You need to focus. Put that aside and
focus,
Alyea. Think of the candle—”

She made herself think of the candle; put her attention on thinking about the shape, the color, the stand, the wick. The image solidified in her mind. She saw a glow forming at the tip, a faint yellow, blue, flaring orange for just a moment—

Across the room, the candle flame swayed in the air currents.

His arms came around her from behind, hands splayed across her stomach. He pulled her back against him; she started to turn, found he wouldn’t allow it.

The heat of his body against hers made it impossible to think about anything else. He’d turned out to be
very
good as a lover; as he ought to be, with centuries of experience. Her breathing hitched, went ragged.

“You have to learn to handle distractions,” he said, staying perfectly still. “Candle, Alyea, candle. Think about the—”

On mischievous impulse, she focused instead on an explicit memory from earlier that morning.

He grunted as if struck, his own breath turning rough; went to his knees as though they’d simply given way beneath him. His arms wrapped around the outside of her legs.

“We have
got
to get you some kathain,” he said, then laughed, ducked down, lunged forward and up, lifting her onto his shoulders. She shrieked like a child without meaning to, grabbing his hair for balance. Her face went hot with embarrassment at the involuntary reaction.

Still laughing, his hands anchoring her legs, he turned to face the candle again. “Look at the damn candle,” he said. “See it
out.”

“Good,” Deiq said. “Now, while I have your attention, think about what you just did.” No amusement or warmth remained in his voice. “You decided something would be a certain way, and it was that way. A candle is small. It doesn’t take much effort. Don’t mistake a bonfire for a candle.”

Suspended in darkness and silence, her pulse jagged from the surprise lift, she had no breath or voice to answer with.

Deiq stood still for another moment, as though waiting, or thinking; then, in a swift movement, reached up, lifted her over his head and down to the floor again. He pulled her against him and said, “There’s something needs to be done. I haven’t—been able to. Maybe you can.”

He breathed against her hair for a few quiet moments, his hands tight on her hips.

“Follow me,” he said at last. The candle flared to life again as he stepped back, releasing his grip. Alyea turned to look up at him and found his expression bleak and grim. She stepped back rather than forward, a chill running through her chest.

“No—” she said, suddenly knowing, if not what, at least
where
he was talking about.

He shook his head, then turned away and walked through the doorway.

“Could we at least wait for
daylight?”
she said to the empty room, knowing perfectly well his sharp hearing would pick it up.

No answer. Her hands clenched into fists as the silence continued and the candle slowly began to gutter.