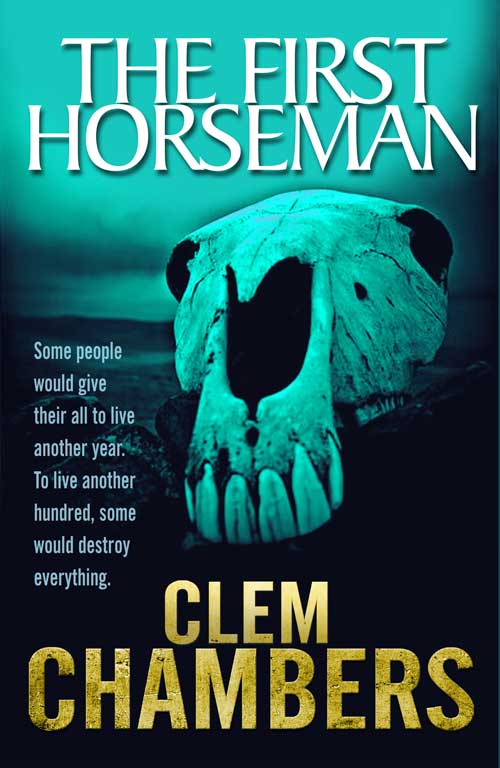 Some would give everything just to live one more year. To live another hundred, some would destroy everything.

Jim Evans, retired super-rich trader, only wants to do good. He wants to fund research that will save lives.

Professor Christopher Cardini has developed medical technology he says will change the world. Through cell therapy, he can even rejuvenate the dying.

Yet there’s something Jim will find even all his money can’t buy: protection from a brilliant, but twisted, mind.

The First Horseman is the fourth book in the acclaimed ‘Jim Evans’ thriller series, by Clem Chambers. It focuses on what might happen if we had the ability to turn the human body clock back? 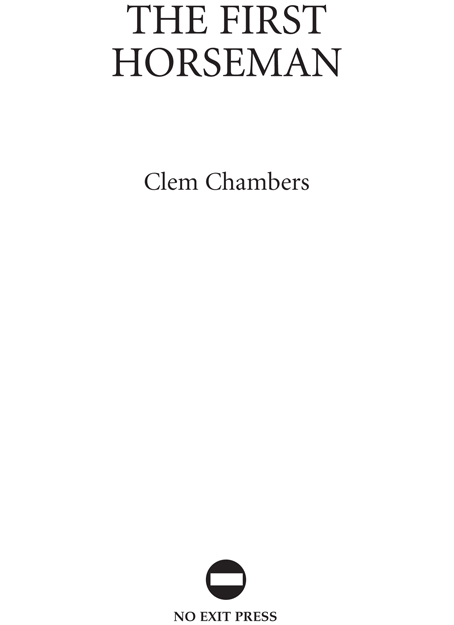 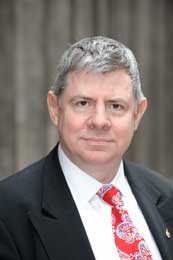 Clem Chambers is the renowned thriller writer behind the popular Jim Evans books, which he pens furiously in his spare time. During working hours, he’s CEO of the world’s leading stocks and shares information websiteADVFN.com and author of Amazon best-selling investment guides,
101 Ways to Pick Stock Market Winners
and
A Beginner’s Guide to Value Investing
released via the company’s own e-book imprint, ADVFN Books (
www.advfnbooks.com
) .

The keen cricketer, coin collector and prolific financial journalist he regularly appears as a markets commentator on major television news networks such as:
CNBC
(Europe, US and Arabia),
Fox News
, the
BBC
,
CNN, Al Jazeera
and Canadian channel,
BNN
. Hailed as a Markets Maven by
Wired Magazine,
you can check out his latest opinions on the world economic matters at Forbes.com.

Drawing on his vast knowledge and experience of world markets, Chambers’ first fictional work, an acclaimed financial thriller
The Armageddon Trade,
was published in 2009 by No Exit Press. Two further Jim Evans books,
The Twain Maxim
and
Kusanagi
followed, in 2010 and 2011.

Get all Clem’s titles online from Amazon or from the London Bookshop
www.londonbooks.co.uk

Praise for
The First Horseman

‘I stopped reading Tolstoy to get my hands on Chambers’ latest and it was worth it!’
– Charles Orton-Jones, Editor
London Loves Business

‘Jim Evans is back, in a narrative that races to a nail-biting denouement’
– Leigh Russell, author

‘the ingredients are all in place for a colourful blockbuster thriller… truly kinetic entertainment’
– Brian Ritterspak
, Crime Time

‘Clem Chambers’ writing is as slick and thrilling as it is authentic.
Kusanagi
is superb’
– Matt Hilton author

‘Compelling. Be prepared to sit up in bed all night with this one’ – Zoe Strimpel
, CityAM

Praise for
The Twain Maxin

‘if Jason Bourne had to invest in shares, this is what would happen’
– Paul Mason, Economics Editor
Newsnight

Praise for
The Armageddon Trade

Professor Cardini was a giant, not only of science but physically. At six feet five inches he loomed over most people, and raised at the lectern he took on superhuman proportions. His hair was jet black and gleamed in the spotlights. He didn’t seem to blink when he spoke. He held out a long right arm and pressed a device in his huge hand. ‘Gerontology: Frontiers,’ said the heading on the projection behind him. ‘Summary.’

The maximum natural lifespan of a modern human is 131 years.

An improvement of five years in one generation.

Nutritional deprivation may extend this to 153 years.

‘I’m afraid few will voluntarily starve themselves for a lifetime, however beneficial the effects,’ Cardini boomed, with a wry smile.

‘The way ahead,’ said a new slide. ‘Gene therapy.’

‘Naturally this is a crucial avenue of research, but recent results suggest that age is not a simple encoding that can be repaired. Age is built into the very fabric of life so it cannot be directly modified.’

The next bullet point was ‘Metabolic manipulation’.

‘We can slow the animal down,’ Cardini went on, ‘and extend its span. However, no one wants to be a tortoise, so this also does not appear to be practicable.’ He clicked the device again and the word ‘Virtualisation’ filled the screen.

‘As unlikely as it might seem, this solution is the most likely in the near future.’ He scanned the audience. ‘A brain/machine interface will allow for the development of mental migration into a computing platform. It is inevitable that such an interface will be created and from it such developments as needed will cascade. This, when developed into a powerful enough platform, will lead to mental immortality and enhancement.

‘Meanwhile it appears that the body we are born with is designed to age and die. It is inherently a machine built to self-destruct. Ageing is a critical system built in from life’s early development. It will not be thwarted. It can only be, with great difficulty, retarded.

‘We are “disposable soma”. Our purpose is no more than to carry the genetic code that permeates every living cell in our body created by three billion years of evolution. This is why we do not live for ever. It is for our DNA to live for ever, not us. We fight this idea because we cannot accept that our fine-tuned intelligence is enslaved to the mindless code we carry, but that code is far cleverer than we are. It made us from nothing and sends us back to nothing. What could we ever do to compare with that feat?’

He looked around the hall. Many of the scientists who had been on the edge of their seats during his presentation were now slumped in their chairs, bored.

‘It seems that while we look to outwit nature, we are setting ourselves up for an uneven battle. We are a puny intelligence set against the awesome might of life-creating DNA. So, my conclusion is that we should simply avoid the conflict and instead go beyond carbon-based life into the new frontier of silicon, where our personalities might live for ever and travel freely. Imagine a mind without limit, a body without weakness, existence in a synthetic Utopia.’ He smiled wryly again. ‘A life,’ he held out his arms, ‘in the cloud.’

He bowed. ‘Thank you very much.’

Cardini stepped down from the dais and headed towards the door along the main aisle. He acknowledged a stooped old professor with a nod. He recalled his face from many such conferences over the decades. Once he would have known many of the people in the room, but now most of his contemporaries were either retired or dead. He seldom left his labs these days, then only forcing himself out to bait the research community so they might come and tell him of their yet unpublished work. He needed to know whether they were on the trail yet.

Happily, it seemed they had not picked up the scent. They were far behind him and his knowledge was accelerating away from theirs. Compared to his breakthroughs, their crude understanding was like undergraduate coursework.

He went to the speakers’ lounge to fetch his coat. There was a tray of Danish pastries by the coffee-machine. He felt a pang of hunger, the sort of physical desire the serum made almost unbearable during the first days after he had taken it. He poured himself some coffee and helped himself to a sticky type of bread, then went to sit by a large picture window overlooking Westminster.

The door opened and a woman entered. Cardini cast his eye over her. She was forty but looked thirty. Her hair was dyed dark blonde, her breasts were tastefully enlarged, her facelift of a high standard and about eighteen months old. He looked out of the window and took a bite.

He looked away from the window as the woman sat down in the chair facing him. She was an attractive specimen.

‘May I have a few words with you?’

He swallowed his mouthful. ‘Forgive me,’ he said. ‘Who am I addressing?’

‘You’re not a journalist, are you?’

‘No,’ she said. ‘I’m in politics, and I’m just interested in the subject of the conference.’

‘Quite,’ said Cardini. He noted how she had flashed her inner wrist at him and the side of her neck. She was displaying instinctual sexual submission. ‘What would you like to know?’ he said.

‘Well, this is going to sound very silly,’ she replied, brushing her hair over her shoulder, ‘but I have to ask.’

‘Go on.’ Cardini was under the spell of the serum and could not help but admire her low-cut neckline and trim figure.

‘This is going to sound like a soap advert, but how do you stay so young?’

Lou continued, ‘All the lecturers here are talking about their research into long life or staying young but they all look their age. You look twenty years younger than you are. You must know what you’re talking about.’

‘You flatter me,’ said Cardini.

She touched his knee. ‘No, really, you look amazing. You look in your fifties.’

‘I hardly think so,’ he replied.

He felt her touch and his primitive lower mind reacted to it. His body was at its post-treatment peak, his organs perhaps as fit as any forty-year-old’s. His resurgent hormones had flooded his system, leaving his mature mind struggling against the impulses of rampant youth. ‘It’s a long and complicated story.’

‘I’m staying at Claridges. Let me take you to lunch.’ She batted her eyelashes at him. ‘Will you come?’

Cardini woke and sat up in the bed. It was six forty-five in the evening. He looked across at Lou, who was lying flat on her back, her mouth open, her hair awry. She was snoring. Her body bore the marks of at least a dozen procedures, and he wondered what she had looked like before she’d had them. Had she been a fat, ugly woman with mousy hair or a pretty girl who wanted to be prettier?

He had made a mistake in having sex with her.

His accelerated state had let his primitive mind overtake his intellect. He had taken a risk for no good purpose. He had given in to pleasure for no sensible reason and he was irritated with himself.