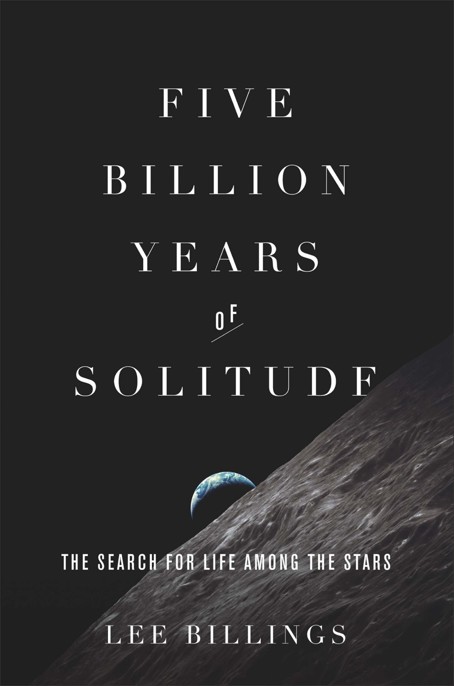 Five billion years of solitude : the search for life among the stars / Lee Billings.

1. Life on other planets. 2. Extrasolar planets. I. Title.

While the author has made every effort to provide accurate telephone numbers, Internet addresses, and other contact information at the time of publication, neither the publisher nor the author assumes any responsibility for errors or for changes that occur after publication. Further, publisher does not have any control over and does not assume any responsibility for author or third-party Web sites or their content.

To Mike and Pam, Bruce and Jo, Melissa,

and all those with the courage to keep looking up

The Worth of a World

After the Gold Rush

Aberrations of the Light

The Order of the Null

Into the Barren Lands

Here on Earth we live on a planet that is in orbit around the Sun. The Sun itself is a star that is on fire and will someday burn up, leaving our solar system uninhabitable. Therefore we must build a bridge to the stars, because as far as we know, we are the only sentient creatures in the entire universe. . . . We must not fail in this obligation we have to keep alive the only meaningful life we know of.

T
his story properly begins 4.6 billion years ago, with the birth of our solar system from a cloud of cold hydrogen and dust several light-years wide. The cloud was but a wisp from a much larger mass of primordial gas, a stellar nursery manufacturing massive stars destined to explode as supernovae. One by one, the giant stars popped off like firecrackers, ejecting heavy elements that sizzled with radioactivity as they rode shock waves through the murk like so much scattered confetti. One of those enriching shock waves may have compressed the cloud, our cloud, in its passage. The cloud became dense enough for gravity to seize control, and it collapsed in on itself. Most of its material fell to its
center to form a hot, simmering protostar. Eventually, the protostar gained enough mass to kindle a thermonuclear fire at its core, and the Sun began to shine. What was left of the cloud settled around the newborn star in a turbulent, spinning disk of incandescent vapor.

Microscopic grains of metal, rock, ice, and tar rained out from the whirling disk as it slowly cooled. The grains swirled through the disk for millennia, occasionally colliding, sometimes sticking together, gradually glomming into ever-larger objects. First came millimeter-scale beads, then centimeter-scale pebbles, then meter-scale boulders, and finally kilometer-scale orbiting mountains called “planetesimals.” The planetesimals continued to collide, forming larger masses of ice, rock, and metal that grew with each impact. Within a million years, the planetesimals had grown into hundreds of Moon-size embryos, protoplanets that through violent collisions grew larger still, until they became full-fledged worlds.

After perhaps one hundred million years of further collisions, the embryos in the inner solar system had combined to make Earth and the other rocky planets. The inner worlds were likely bone-dry, their water and other volatiles blowtorched away by the intense light of the newborn Sun. In the outer solar system, freezing temperatures locked the volatiles in ice. The ices provided more-solid construction material, allowing the cores of Jupiter and the other outer planets to rapidly form and sweep up lingering gas within the disk in only a few million years. As they grew, the giant planets created zones of instability where embryos could not assemble, leaving behind pockets of primordial planetesimals and bands of shattered rock and metal. These remnants are the asteroids. The giant planets also catapulted many icy planetesimals far out into the solar hinterlands, to drift in the dark out beyond the orbit of present-day Pluto. When jostled by perturbing planets, galactic tides, or close-passing stars, those icy outcasts fall back toward the Sun as comets.

Finally, sometime between 3.8 and 4 billion years ago, a complex, chaotic, hazily understood series of gravitational interactions between
the giant planets stirred up most of the outer solar system, sending barrages of asteroids and comets hurtling sunward to pound the dry, rocky inner worlds. This event is called the “Late Heavy Bombardment,” and was the last gasp of planet formation. We observe its effects in the cratered surface of the Moon, and also in the rain that has eroded its geographic scars from our own planet—much of Earth’s water seems to have arrived during the Bombardment, express-delivered from the outer solar system. Afterward, Earth’s crust had partially melted, and its original atmosphere had been mostly swept away. But as those first torrential rains fell from the steam-filled sky, our planet gained the gift of oceans. Slowly, the Earth cooled, and gas-belching volcanoes gradually replenished the atmosphere. Soon, perhaps uniquely of all the new-formed worlds of the solar system, ours would somehow come alive.

Slightly less than four billion years later, I was four years old, standing with my mother, father, and sister in our backyard in Jasper, Alabama. It was January 1986, shortly after sunset. My father had built a small bonfire, and we clustered around it against the evening chill, roasting marshmallows as the stars came out overhead. Lower in the sky, just above the treetops, a soft white smear was barely visible. It was Halley’s comet, passing near Earth on its trip around the Sun. I remember asking whether I could visit it. I had recently seen the 1974 film adaptation of Saint-Exupéry’s
The Little Prince
, and, like the small boy living on an asteroid in the story, I, too, wanted to fly through space to see all the solar system’s strange places. “Maybe someday,” the answer came. Weeks later, I and the rest of a generation of children would learn that space travel is no fairy tale, watching as NASA’s space shuttle
Challenger
broke apart on its way to orbit.

I didn’t know then that Halley’s comet would not be coming back until far-off 2061, and I was much too young to feel the weight of that date. The comet didn’t feel it, either—when it returned, it would be practically unchanged. I, on the other hand, would be nearing my eightieth year on Earth, if I was so lucky. With a great deal more luck, my parents would see it through centenarian eyes.

When I was ten, after we had moved to Greenville, South Carolina, my mother spent much of one summer teaching illiterate adults to read at a local library. She always brought me along, letting me wander the shelves unsupervised. I began reading enormous amounts of science fiction about alien civilizations and interstellar travel, as well as books about astronomy, which tended to gloss over the possibility of planets and lives beyond our solar system in favor of bigger, flashier things—exploding suns, colliding galaxies, voracious black holes, and the Big Bang. Such was the spirit of the times: for most of the twentieth century, astronomers had been all-consumed by a quest to gaze ever deeper out into space and time, pursuing the fundamental origins and future of existence itself. That quest had revealed one revolutionary insight after another, showing that we lived in but one of innumerable galaxies, each populated by hundreds of billions of stars, all in an expanding universe that began nearly fourteen billion years ago and that might endure eternally. I thrilled at the cosmological creation story but couldn’t help but think that it was missing something. Namely, us. Lost somewhere in between the universe’s dawn and destiny, a ball of metal, rock, and water called Earth had given birth not only to life, but to sentient beings, creatures with the intellectual capacity to discover their genesis and the technological capability to design their fate. Creatures that, before their sun went dim, might somehow touch the stars. Maybe what had happened once would happen many times, in many places. My father saw the galaxies and stars on the covers of my checked-out library books and bought me a department-store telescope.

Looking through my telescope, I was soon disappointed to learn I couldn’t see many of the cosmic fireworks described in the astronomy books, or any evidence for the galactic empires of science fiction. Everything out there looked awfully, deathly quiet. It seemed in all that cosmic space, and thus in the great minds of many learned astronomers, there was paradoxically no room for living beings and their tiny home worlds. Such things were too small to be searched for, too insignificant to be of notice. I kept looking every now and then anyway,
half-hoping I might catch a UFO in my viewfinder as it streaked across the sky, or see the bright flashes of some interstellar battle in the twinkling of a star. One day I asked my father whether any planets at all existed around other stars. He thought a moment, and replied that other stars probably had planets, but that no one really knew; none had ever been found, because they were all so far away. After that, most times when I gazed up at the night sky, I would wonder what those planets might look like. Would they be like Earth? Would they have oceans and mountains, coral reefs and grasslands? Would they have cities and farms, computers and radios, telescopes and starships? Would creatures there live and die as we did, or look up and wonder about life’s purpose? Would they be lonely? Staring at the trembling stars, I dreamed of worlds I thought I would never see.

Go for the Goal! by Fred Bowen
Unmasking Juliet by Teri Wilson
September's Dream by Langan, Ruth Ryan
Full Disclosure by Dee Henderson
All I Want - a Tryst With a Twist by S. L. Scott
Twisted Tale of Stormy Gale by Christine Bell
A Murder in Time by Julie McElwain
Xtreme Manly Man Force of Intense Badassery: Book One: The Fountain of Testoserone by Kell Inkston
Complete Maupassant Original Short Stories by Guy de Maupassant
Cole (The Leaves) by Hartnett, J.B.