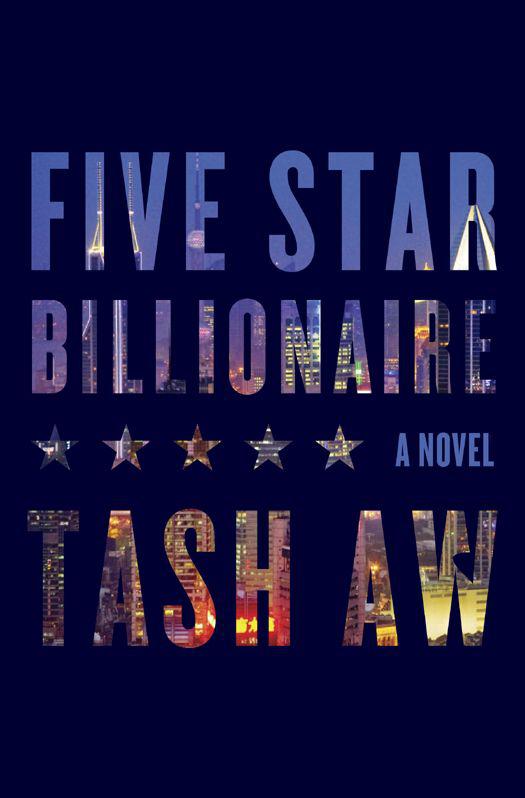 Five Star Billionaire
is a work of fiction. Names, characters, places, and incidents are the products of the author’s imagination or are used fictitiously. Any resemblance to actual events, locales, or persons, living or dead, is entirely coincidental.

Published in the United States by Spiegel & Grau, an imprint of The Random House Publishing Group, a division of Random House, Inc., New York.

Originally published in the United Kingdom by Fourth Estate, a division of HarperCollins UK.

Title page
photograph by Ian Teh

Foreword: How to be A Billionaire
1. Move to Where the Money Is
2. Choose the Right moment to launch Yourself
How to Achieve Greatness
3. Bravely set the World on Fire
4. Forget the Past, Look only to the Future
How to Manage Time
5. Reinvent Yourself
6. Perform all Obligations and Duties with Joy
How to be Gracious
7. Calmly Negotiate Difficult Situations
8. Always rebound after each Failure
How to Invest Wisely—A Case Study in Property Management
9. Pursue Gains, Forget Righteousness
10. Never Lapse into Despair or Apathy
11. Inquire Deeply into Every Problem
12. Work with a soul Mate, Someone Who understands You
How to structure a property deal (For total Beginners)—Case Study, Continued
13. Luxuriate in Serendipitous Events
14. Even Beautiful things will Fade
15. A Strong fighting Spirit Swallows Mountains and Rivers
16. Beware of storms arising from clear Skies
How to be Inventive—Property-Management Case Study, Continued
17. Cultivate an Urbane, Humorous Personality
18. Be Prepared to Sacrifice Everything
Case Study: Human Relations
19. There can be no Turning Back
20. Anticipate Danger in Times of Peace
How to Hang on to your Dreams—Property Case Study, Continued
21. Adopt others’ thoughts as though they were your Own
22. Boundaries Change with the Passing of Time
23. Nothing remains Good or Bad Forever
24. Embrace your Bright Future
Further Notes on How to be Charitable
25. Know when to cut your Losses
26. Strive to understand The Big Picture
27. Nothing in Life lasts Forever
How not to Forget—Property Case Study, Concluded
28. Travel Far, Keep Searching
29. Life is a Floating Dream
30. The Journey is Long

SUPPOSE ONE CAN LIVE WITHOUT OUTSIDE PRESSURE,

SUPPOSE ONE CAN CREATE ONE’S OWN INNER

TENSION—THEN IT IS NOT TRUE THAT THERE

IS NOTHING IN MAN.

FOREWORD:
HOW TO BE
A BILLIONAIRE

S
ome time ago—I forget exactly when—I decided that I would one day be very rich. By this I mean not just comfortably well off but superabundantly, incalculably wealthy, the way only children imagine wealth to be. Indeed, nowadays, whenever I am pressed to pinpoint the time in my life when these notions of great fortune formed in my head, I always answer that it must have been sometime in my adolescence, when I was conscious of the price of life’s treasures but not yet fully aware of their many limitations, for there has always been something inherently childlike in my pursuit of money—that much I admit.

When I was growing up in rural Malaysia, one of my favorite TV programs was a drama series set in a legal practice somewhere in America. All the details—the actors, the plot, even the setting—are lost to me now, blurred not just by the passage of time but by a haze of bad subtitles and interrupted transmissions (the power generator and the aerial took it in turns to malfunction with crushing predictability, though in those days it seemed perfectly normal). I am not certain I could tell you what happened in a single episode of that soap opera, and, besides, I did not care for the artificial little conflicts that took place all the time, the emotional ups and downs, men and women crying because they were falling in love or out of love; the arguing, making up, making love, et cetera. I had a sensation that they were wasting time, that their days and nights could have been spent more profitably; I think I probably
felt some degree of frustration at this. But even these are fleeting impressions, and the only thing I really remember is the opening sequence, a sweeping panorama of metal-and-glass skyscrapers glinting in the sun, people in sharp suits carrying briefcases as they vanished into revolving doors, the endless sweep of traffic on sunlit freeways. And every time I sat down in front of the TV I would think: One day, I will own a building like that, a whole tower block filled with industrious, clever people working to make their fantasies come true.

All I cared for were these introductory images; the show that followed was meaningless to me.

So much wasted time.

Now, when I look back at those childhood fantasies, I chuckle with embarrassment, for I realize that I was foolish: I should never have been so modest in my ambitions, nor waited so long to pursue them.

It is said that the legendary tycoon Cecil Lim Kee Huat—still
compos mentis
today at 101—made his first profit at the age of eight, selling watermelons off a cart on the old coast road to Port Dickson. At thirteen he was running a coffee stand in Seremban, and at fifteen salvaging and redistributing automobile spare parts on a semi-industrial scale, a recycling genius long before the concept was even invented. Small-town Malaya in the 1920s was not a place for dreams. He was eighteen and working as an occasional porter in the Colony Club when he had the good fortune to meet a young assistant district officer from Fife called MacKinnon, only recently arrived in the Malay States. History does not record the precise nature of their relationship (those ugly rumors of blackmail were never proved), and in any event, as we will see later, imagining the whys and wherefores of past events, the what-might-have-beens—all that is pointless. The only thing worth considering is what actually happens, and what happened in Lim’s case was that he was left with enough money upon MacKinnon’s untimely death (in a drowning accident) to start the first local insurance business in Singapore, a small enterprise that would eventually become the Overseas Chinese Assurance Company, for so long a bedrock of the Malaysian and Singaporean commercial landscape until its recent collapse. We can learn much from people like Lim, but his case study would involve a separate book altogether. For now, it is sufficient to ask: What were you doing when you were eight, thirteen, fifteen, and eighteen? The answer is, I suspect: not very much.

In the business of life, every tiny episode is a test, every human encounter a lesson. Look and learn. One day you might achieve all that I have. But time is sprinting past you, faster than you think. You’re already playing catch-up, even as you read this.

Fortunately, you do get a second chance. My advice to you is: Take it. A third rarely comes your way.