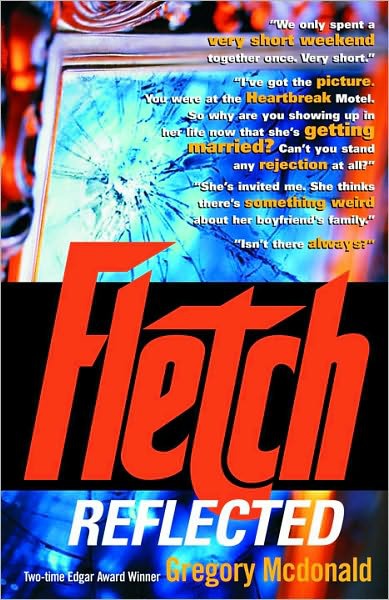 Gregory Mcdonald is the author of twenty-six books, including eleven Fletch novels and four Flynn mysteries. He has twice won the Mystery Writers of America’s prestigious Edgar Allan Poe Award for Best Mystery Novel, and was the first author to win for both a novel and its sequel. He lives in Tennessee. His Web site is
www.gregorymcdonald.com
.

Exits and Entrances
Merely Players
A World Too Wide

The Education of Gregory Mcdonald

(Souvenirs of a Blown World)

“F
aoni.” In fact, he was answering the telephone at Andy Cyst’s desk in the huge Global Cable News building in Virginia. He had no desk, or telephone, of his own.

The switchboard knew he was working with Andy Cyst.

The young woman’s voice said, “Is this Fletch?”

“I know your name is Jack Faoni. The weekend we spent together you had me call you Fletch.”

“Skiing. In Stowe, Vermont. A few years ago. We met there. At The Shed. You were with some other guys from a lumber camp. Playing your guitar. People were buying you beer to keep you playing. Well, I sort of kidnapped you. First, I kidnapped your guitar.” Her voice was low, and warm. “When you pursued me to the parking lot to get your guitar back, I grabbed you. It was snowing. You were very hot. I ripped your shirt. I pulled it down off your shoulders. Do you remember the snowflakes falling on your sweating shoulders while we kissed? You sizzled.”

“Good grief! Whoever you are, woman, you just elevated my temperature by more than a little. I’m hot now.” Sticking a finger inside his shirt collar, Jack scanned the huge, brightly lit, colorful, air-conditioned room filled with journalists’ workstations. “I wasn’t a minute ago.”

“You were very playful. Silly. You don’t remember me?”

“I do.” She had coal black hair, very wide-set coal-black
eyes … And her name was? “I remember you weren’t there when I woke up.”

“I had to meet my father early for Belgian waffles. It really wasn’t a weekend we spent together. Just a few lovely hours.”

“I remember it was a cold morning and I had to run through the snow in a flannel shirt torn to shreds. Thanks for leaving me my guitar, anyway.”

“You use your hands beautifully.”

“Why didn’t you come back? Leave a note? Something?”

“I had to ski with my father. Then he drove me back to Poughkeepsie.”

“I waited.” He had not waited long. The snow was pure powder, the skiing too good to miss. “I wasn’t sure you weren’t a dream.”

“Anyway, I’ve been seeing your name on GCN the last few days. Those great stories about The Tribe.”

“I guess so. I’m here. They’ve used everything I’ve brought them.”

“That’s great. But they never showed your face on television. If it was your story, why didn’t they use you on camera?”

“People come to recognize you. Then you can’t do the kind of stories I want to do.”

“Oh. You must have been working on that story a long time.”

“It took a long time to set up. Once it got going, it went quickly. Very quickly.” “So guess where I am.”

“You’re in hospital with some horrible disease the doctor says you must tell me about?”

“I give up.” Jack rearranged some papers on Andy Cyst’s desk. “Why don’t you remind me of your name, if you ever shared it with me in the first place, tell me where you are, if that’s relevant to the conversation, then tell me why you called. You’ve talked so long I’m beginning to need a shower.”

“We didn’t do all that much talking, as I remember. We went at each other like bear cubs.”

“Vindemia. I’ve read that word somewhere. What is it, defunct coal mines in Appalachia, what?”

“One of the biggest estates in America.”

“Actually, I’m calling you from a phone booth outside the Vindemia Gas Station and General Store. The estate has its own little village, complete with chapel, library, and many, many rent-a-cops.”

“Oh, yeah. The guy who straightened out our left from our right, right from left when we look at ourselves in a mirror.”

“Boxers appreciate his mirror, too.”

“They don’t get blindsided so much these days. Haven’t you noticed?”

“Think of the philosophical, psychological, to say nothing of poetic ramifications of the perfect mirror. I mean, for centuries we were seeing ourselves wrong, weren’t we? Not as others saw us, as they say.”

“I’d like to meet him. Radliegh must have an interesting mind. To take a thing as ancient and simple as the mirror and realize it was wrong; it was backward … ‘In the clear mirror of thy ruling star/I saw, alas!, some dread event depend.’”

“Oh. You called to invite me to your wedding? I’ll send a present. Shreds of my flannel shirt, as a keepsake, or a dust-cloth, whichever you need the more.”

“To invite you here.”

“You need someone to speak up for you? A playmate reference, maybe?”

“This is the first time I’ve ever been here. I’ve come to meet the family.”

“I don’t get it. Why would you need me? Even want me in the same state?”

“There’s something real weird about this place. These people.”

“Sure. They got very, very rich, very, very fast. Who said, ‘Wealth doesn’t corrupt as much as it reveals’?”

“I want you to come here. I can say you’re my cousin.”

“As I remember, we look nothing alike.”

“Sometimes cousins don’t. You could just be passing by and drop in for a few days.”

“Sure. You’re marrying into a maxi-wealthy family, get brought home by Chet ditto to meet Mama, Papa and the Borzoi hound, and your distant relatives start landing on them asking directions to their larder. What kind of an impression would that make?”

“This place is so big, there are so many people wandering around, you wouldn’t even be noticed.”

“Yeah, I do a pretty good imitation of a potted palm. You telling me you think there’s a story for me here somewhere? What is it? The guy’s been profiled a million times. A Massachusetts Institute of Technology professor of physics invents the perfect mirror, makes zillions of dollars between a Tuesday and Friday, buys half the state of Georgia, builds a fifty room mansion—”

“Really? I thought I was exaggerating.”

“The roof is five acres.”

“Lor’ love a duck! I’ve been on farms smaller than that.”

“Five acres, they tell me. It looks it.”

“—has a gorgeous, well-behaved family—”

“That’s where the profile goes awry.”

“They are not a gorgeous, well-behaved family?”

“I think they want to kill him.”

“Chester Radliegh. I think his family wants to murder him. His friends. The people who work for him. Everybody around him. I’m afraid one of them will succeed.”

“What on earth makes you say a thing like that? Is he that much of a bastard?”

“Then why do you say such a thing?”

“I don’t know, exactly. Things are weird here. Little things. Everything is so tight, you know? Security. Yet, these weird little things keep happening. I think Chester, Mister Radliegh, thinks he has invented the perfect mirror in his family, all the people he has collected around him, except they’re not perfect, they seem to want to leap at him….”

Andy Cyst was walking from the administration offices toward his desk. The room was so big Jack thought there was a need for conveyer belts on the floor. It was not a city room; it was a world room; a cosmic room.

Jack took his feet off the edge of Andy’s console desk.

“… That’s why I want you to come here,” Shana continued. “Investigate this. There’s so much tension. I’m afraid of what’s going to happen.”

Jack stretched the muscles of his upper back. He had had an exciting but exhausting few weeks. “Well, I’d like to meet Mister Radliegh, as I said,” Jack said into the phone, “but I do have a job, I think, and you understand I can’t drop everything and come to some Valhalla in the sky, pass myself off as some itinerant relation to the daughter-in-law to be, just in case the butler spits in Daddy’s mock turtle soup. You do understand that, don’t you?”

“What can I do to persuade you?”

“Is ‘story’ all that matters to you? I’ve heard you play the
guitar. I’ve had you in bed. The whole world has just seen this wonderful expose of The Tribe you’ve done. You mean to tell me you don’t care about people?”

“Get some evidence. Find me a plan to collapse those five acres of roof on Chester Radliegh.”

“I was hoping you’d do that. Find evidence, I mean.”

“Give me your phone number, just in case old Chester gets carted off to the hospital with a case of botulism, or something.”

How the French Won Waterloo (or Think They Did) by Clarke, Stephen
Darlinghurst Road by T.C. Doust
The Man of Maybe Half-a-Dozen Faces by Ray Vukcevich
Two Flights Up by Mary Roberts Rinehart
Without You I Have Nothing by J A Scooter
The High King's Tomb by Kristen Britain
Double Minds by Terri Blackstock
The Siege by Helen Dunmore
Unraveled by Lorelei James
Damsels in Distress by Nikita Lynnette Nichols