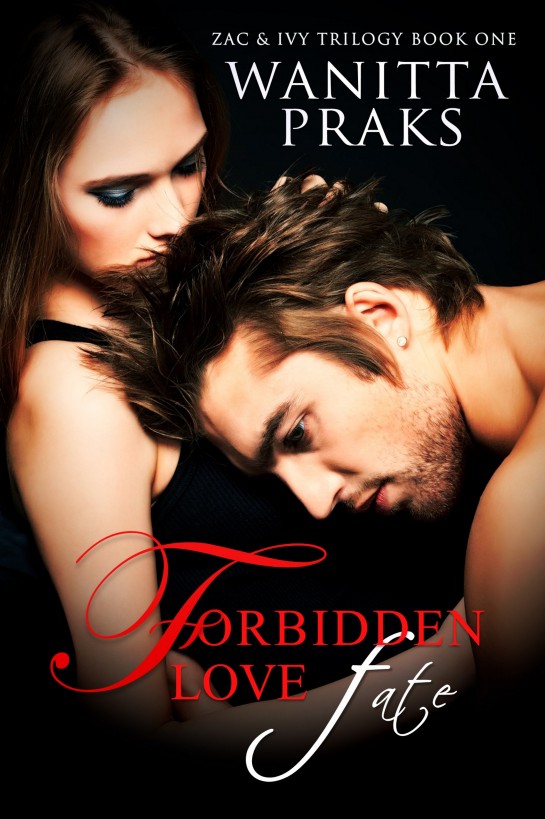 This is a work of fiction. Names, characters,
places, and incidents either are the product of the author’s
imagination or are used fictitiously, and any resemblance to actual
persons, living or dead, business establishments, events, or
locales is entirely coincidental.

All rights reserved. This book was
self-published by the author Wanitta Praks. No part of this book
may be reproduced, scanned, or distributed in any printed or
electronic form without agreement and written permission of the
author. Please do not participate in or encourage piracy of
copyrighted materials in violation of the author’s rights. Purchase
only authorized editions.

The author can be reached at

I have nightmares, specifically a recurring
one, almost every night. These nightmares aren’t of boogiemen in
the closet or monsters under the bed. These dreams are of death, my
parents and brother dying in a car crash right in front of
eyes.

I wake in the middle of the night, tears
staining my cheeks and my heart thumping in my chest, just like
tonight.

How I wish it would just go away. I want to
forget it, to start fresh, but it will not let me go. Because these
dreams are actual memories, memories that have morphed into
never-ending nightmares.

When I close my eyes, I’m at that scene
again. Bright headlights blinding my vision, the stillness of the
air after, the pelting rain, and finally, blood. Everywhere.

I lie back and huddle underneath the
blanket, closing my eyes, trying to block out the painful
skittering images of my lifeless parents and brother, me standing
over their caskets. Grandma crying until she fainted.

Some time later, I fall asleep to the song
of the wind playing with the leaves rustling against the window,
the soft melody drawing me back to slumber. The last remaining
image that filters through my mind is the menacing face of the man
responsible for killing my parents, the reckless drunk—his fierce,
ugly weed-green, bloodshot eyes boring straight into mine, his
smile leering—before he walked away, free.

The crowd goes wild when I appear onstage. I
tap my chest with my fist, my usual sign, asking,
Ready to rock
the house, guys?
The sound of the screaming girls would drown
out any attempt at actual speech. Our first performance at this
jam, back in junior high, we yelled like hell at each other over
the turbulent crowd. By the time the show ended, I had a sore
throat for a whole month. So now we just stick to hand signals and
head gestures.

Apollo is our amateur rock band, performing
at various high school festivals, made up of a bunch of teenage
guys. Trey’s our drum man, Loki, our bass guitarist, and me, Zac
Elliot, the lead singer and guitar guy. I’ve been singing pretty
much since I was out of diapers.

When my band mates see my signal, they nod.
After Trey slams on the drums a few times, we go into full music
mode, my guitar riffing through the speakers.

It’s time like this I love most, performing
in front of a live audience with our high school mates as fans.
It’s in my heart and soul to play and sing.

Tonight, we’re playing in the Forsyth Barr
Stadium. In exactly two days, high school will officially start.
The city of Dunedin, situated on the east coast of the South Island
of New Zealand, usually holds these concerts for their students as
a way to bribe them to study hard for the rest of the year.

As Trey beats on the drums and Loki on his
bass guitar, I sing in tune to the rhythm and move my body along
while playing Elsa, my guitar.

You probably think I’m a pretty weird guy,
naming my guitar, but she’s my one and only. I wouldn’t part with
her for anything. She’s the one that made me realize I love to sing
and play seriously.

She was a present from Dad. Even though
right now he doesn’t live with me, since his job requires him to
travel to almost every continent, I love him dearly. For my twelfth
birthday, after he and Mum divorced, he gifted Elsa to help me
overcome my grief. That’s how she and I became best friends. In
times of loneliness, when I need someone most, she’s there for me.
No girl could measure up to her. We create beautiful music
together.

At this point, I’m seriously overtaken by
the music as I play Elsa. As I reach the main chorus, the crowd
grows crazy and starts jumping up and down, performing their
spectacular Mexican wave, and singing along with me.

When our song is finished, we salute the
crowd and I shout through the mic, “See ya later tonight.” Then we
disappear offstage to the sound of more shouting and screaming from
fan girls.

Backstage, I disengage myself from Elsa and,
fully sure she’s safe in her case, I don my secret outfit I
prepared earlier.

Kai slams into me from behind. “Hey,
Bro.”

He slaps me again when I don’t respond.

Kai is my best bud since kindergarten. He
would’ve been in the band too, but sadly he hasn’t a musical bone
in his body, so most of the time he just hangs around backstage and
basically acts like my stage manager.

“Don’t tell me you’re going in that,” he
queries once I’m fully dressed in my midnight
Phantom of the
Opera
mask and black attire. “You do know the school requires
you to make another appearance before the night is over?”

“I’m aware of that, Kai, but for now, it’s
time to have some fun.” I smirk, whipping him with a towel.

He dodges just in time.

Damn that bastard. He moves like a ninja
sometimes.

“Why are you wearing the mask?” he asks.

“You know what’ll happen if they know I’m
the lead singer of Apollo? Smack, I tell ya,” I tell him with a
slam on his shoulder. “This way Zac Elliot gets to enjoy being in
the school festival without getting his face squashed like a
pancake.”

“Zac, if I…” Kai starts to
hyperventilate.

When Kai’s stressed, he goes into this manic
mode and, as always, it’s my duty as his best friend to calm him.
And you want to guess why he goes into these hysterics? It’s
because he’s freaked out. Kai likes to think I’m his idol or
something. He follows all of my footsteps and copies all of my
moves.

Once he manages to resemble a human being
again, I go to my duffel bag and take out an extra mask and costume
that I hid earlier, just for this sake. Turning back to him, I say,
“Here, wear this. I’m sure you’ll get the girls too.”

He looks at the mask and costume, then
stares at me like I’ve gone senile.

“You expect me to wear a clown mask and
costume while you’re the mysterious Phantom of the Opera?”

“Umm… yeah.” I nod. Not that I want to
outshine him or anything, but those are the only costumes I own.
It’s either me being the phantom or me as the clown. You can guess
which I choose, right?

I turn to stare at him, surprised he’s
initiated this verbal competition here of all places. I lift my
eyebrows again, seeing his ebony bird’s nest hair, and hurl one
back at him. “Afro.”

He goes red in the face.

He gives me the eyebrow challenge.

“Mr. D-minus,” he throws back at me,
referring to last year’s algebra test when I received a D-minus.
Dad got so pissed off that he grounded me for a whole month. He
even threatened me, saying if I didn’t improve my grades this year,
he’d take away Elsa. I can’t have that.

“Greek god,” he banters back.

Then we both burst out laughing.

If only Kai were related to Mandela, I
wouldn’t question him one bit. He is like the famous Nelson Mandela
in so many ways. I’m afraid I’m turning into a Samaritan too. By
habit, everywhere I go, I always carry spare change in my pockets
just in case there’s some charitable society around the street
corner, requiring donations.

After moments of laughter, we settle
down.

“Those are some sick costumes you’ve got
going there,” Loki says, holding up his Polaroid camera. He’s like
me and Elsa with his camera. We both have bonds with our equipment.
“Now say cheese,” he says, snapping a picture of us. And before we
know what’s what, Loki hands us our shots.

I take the picture from his hand. We look
weird, my face scrunched up, and Kai looks like he sucked a
lemon.

Kai slaps me out of my thought and says,
“All right, Apollo, enough of that self-admiring. Let’s go and have
some fun.”

“Yeah, let’s go,” I say and tuck the picture
in Elsa’s case. With a wave to my other band mates, we head out
into the wild crowd.

I’m pleased I covered my face and changed my
clothes. Looking at all the fan girls and boys standing near the
gate, I see they’re ready to attack me as I walk out the exit door.
But with one look at Kai and me, they simply turn their heads in
disappointment.

I hoot and give Kai a high-five. Yes,
tonight I can go around, walking and talking, without the
disruption of the fans. There’s no Zac Elliot, lead singer of
Apollo, but just me, the fake Phantom and my clown friend,
sightseeing the crowd, checking out the other bands, and enjoying
the best time of our lives before school starts again.

“Oooh la-la,” Kai coos and bounces around me
when he sees all the hot girls. “So many hot girls and some of them
aren’t even from our school.” He turns to me and shakes me when I
don’t respond. “Look, bro, look at them. Look at the way they’re
making eyes at you.”

He pushes me aside to hide me behind his
tiny frame, like I need some protection or something from those
raging hormonal girls.

I only laugh. But he’s quite right, though.
A lot of people say I have a face made for the big screen, but I
just biff them off.

What face? I can’t imagine myself being
handsome or beautiful. Face isn’t what matters to me; it’s the
personality that counts. That’s why Kai, my buddy here, is my best
friend. He may not have the face of a swoon-worthy movie actor with
that outrageous acne populating his face, but his heart is made of
gold. So it annoys me that even with this mask on, I still get
looked at.
Is this the curse of having a perfect body too? Maybe
I should’ve worn the clown outfit instead.

“If you have such a nice body, then you
should just take that mask off too. This is stupid anyway. I’m
hiding my ugly face and you’re hiding your handsome one.”

“Yeah, even if I do grow out of it, I’m
still a midget. Standing next to the handsome Apollo, I’m a
dwarf.”

“Come on, Kai.” I pat him on the shoulder.
“There’s nothing special about my face or my height. I have two
eyes, one nose, one mouth. Same as you. Plus, being small has some
advantages too.”

Can't Stand the Heat by Shelly Ellis
Daring Devotion by Elaine Overton
Hereward by James Wilde
The Swan Maiden by Heather Tomlinson
Dreams from My Father by Barack Obama
Princess at Silver Spires by Ann Bryant
The Predator by K. A. Applegate
Tears on My Pillow by Elle Welch
The Mystery of Adventure Island by Paul Moxham
Fire and Ice by Susan Page Davis