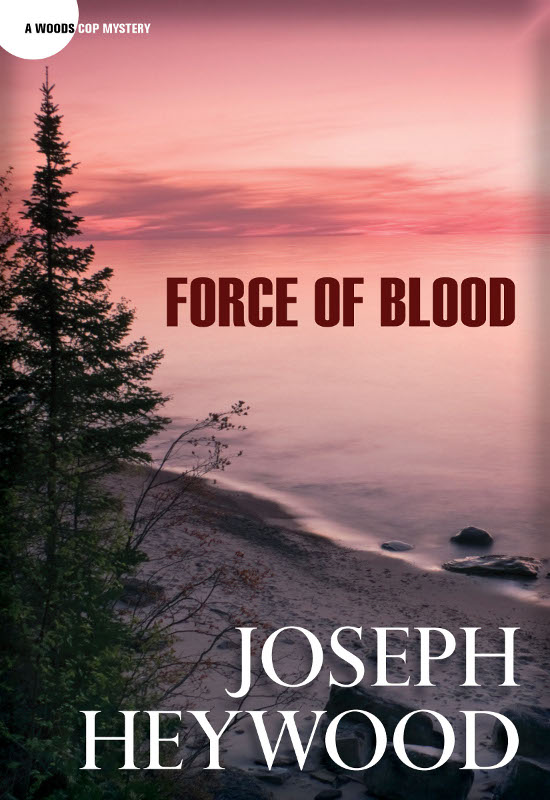 Praise for Joseph Heywood and the Woods Cop Mystery series:

“Heywood has crafted an entertaining bunch of characters. An absorbing narrative twists and turns in a setting ripe for corruption.”

“Heywood is a master of his form.”

“Top-notch action scenes, engaging characters both major and minor, masterful dialogue, and a passionate sense of place make this a fine series.”

“Joseph Heywood writes with a voice as unique and rugged as Michigan’s Upper Peninsula itself.”

“Well written, suspenseful, and bleakly humorous while moving as quickly as a wolf cutting through the winter woods. In addition to strong characters and … compelling romance, Heywood provides vivid, detailed descriptions of the wilderness and the various procedures and techniques of conservation officers and poachers…. Highly recommended.”

“Taut and assured writing that hooked me from the start. Every word builds toward the ending, and along the way some of the writing took my breath away.”

ALL RIGHTS RESERVED. No part of this book may be reproduced or transmitted in any form by any means, electronic or mechanical, including photocopying and recording, or by any information storage and retrieval system, except as may be expressly permitted by the 1976 Copyright Act or in writing from the publisher. Requests for permission should be addressed to Globe Pequot Press, Attn: Rights and Permissions Department, P.O. Box 480, Guilford, CT 06437.

Lyons Press is an imprint of Globe Pequot Press. 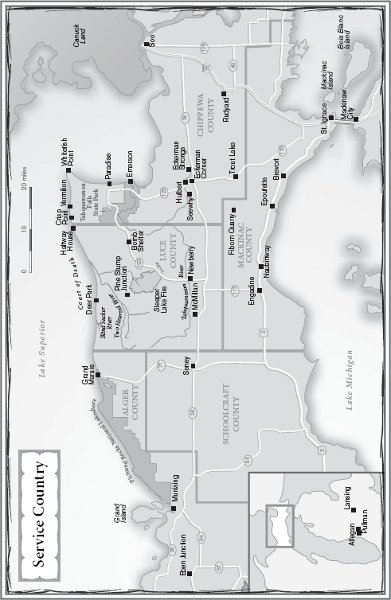 … there never was so much as a single Indian that could be brought to relish our way of living. Children have been taken even in their swaddling clothes, and have been brought up with a great deal of care … all of these precautions having been fruitless, the force of blood having ever got the better of education: The moment they found themselves at liberty, they have torn their clothes to pieces, and have gone across the woods in the quest of their countrymen, whose way of living seemed preferable to ours.

—Pierre de Charlevoix
Journal of a Voyage to North America. Undertaken by Order of the French King. Containing the Geographical Description and Natural History of that Country, Particularly Canada, Together with an Account of the Customs, Characters, Religion, Manners, and Traditions of the Original Inhabitants (Printed for R. & J. Dodsley, London, 1761)

62 Over Luce County in a Blackhawk

70 Lambs of of the Lord, Chippewa County

Grady Service glared at Milo Miars, forcing his lieutenant to look away.

“Are they out of their gourds in Lansing?” Service challenged. “How do we do the job on fifteen hundred miles a pay period? That’s a hundred and fifty miles a day. Hell, it’s a hundred miles just to cross Mackinac County. You can’t cross most UP counties on that mileage.”

Miars stared out the window of the Kuppa Joe Kafe. “We’re trying to cut every corner to avoid officer layoffs,” Miars said. “And you’re overstating the mileage restriction?”

Miars continued to stare out at the parking lot and Service grimaced. “Seriously, El-Tee, what’s the point? Are we supposed to just go through the motions, throw together a Potemkin village?”

“What the heck are you talking about now?” Miars shot back, turning to look at his subordinate.

Service knew he perplexed his boss most of the time. “When Catherine the Great would go out into Russia to see her people, her officials would make sure new facades got put on the crumbling villages she would pass by, just to make them look new and good. But they were pure shit, damn fakes, just like these mileage restrictions.”

Service snapped, “What about Lori?” He was referring to Lorelei Timms, the state’s embattled governor.

Miars sneered. “You’d know that better than me. She’s
your
friend.”

Service had met the governor under trying circumstances just prior to her being elected, and they had become friends. She was his biggest fan, which did not help his deep desire for anonymity. “Does she even
know?
”

“For Pete’s sake, Grady, she’s trying to save General Motors, Chrysler,
and
the darn state. We’re just a pimple in the big picture.”

“Who the hell is Pete? And why do we give a damn about his sake? Tell me what the hell I’m supposed to do, Milo. I’m a detective, not a patrol officer. I go to where my cases are, no matter where that takes me. If we’re gonna redefine the whole shooting match, now’s the time to tell me.”

Miars scratched his clean-shaven chin. “Work the cases in range, and let the others hang until the fiscal picture is clearer.”

Service shook his head. He didn’t blame Milo. “The state’s drowning and taking us down with it.”

Miars said, “You could get out now and think about the young kids. They aren’t even considered essential state workers and don’t have a pension—the same 401(k) as a DNR cafeteria worker in the Mason Building.”

A few years before, the Michigan State Police had lost some top officers by transfers into the DNR; they had carped to their patron saint in the legislature, who then pushed through a law that quietly removed DNR law enforcement from the same retirement package as the Troops. The intent was to give the MSP a recruiting and retention advantage. Officers from the two organizations still worked together and backed up each other, but it was a sore point, growing sorer.

“At least the Troops have a fifty-mile limit,” Miars said.

“Have you considered retiring?”

“Not with the outfit teetering on the edge of the shit can.”

“Does this job mean
that
much to you?”

“Doesn’t it mean that much to
you,
Milo? If it doesn’t, turn in your goddamn badge. The last thing we need are a bunch of damn fence-dancers.”

“Remember who you’re talking to!” Miars said with a growl.

“Man-to-man, ‘boss’ is just a paper title, Milo. That’s
all
it is. Officers follow those who lead, not those who
play
leader.”

“What’re you going to do?” Miars asked, obviously looking to end the conversation.

“Drive my Tahoe to the edge of my mileage limit and travel from that point in my four-wheeler. I can get a helluva lot of miles on the ATV for not much gas money. Maybe I’ll double up with other officers and we can double our daily miles.”

Miars shook his head and rolled his eyes.

Service planned to pay for his own gas, no matter what limits the department levied. He had way too much money thanks to a bequest from his late love, Maridly Nantz, and he’d already taken care of those who depended upon him. He had barely touched the cache since Nantz’s murder.

Maybe it’s time you did,
he told himself, scribbling something on a napkin with a ballpoint pen that was beginning to run dry.

After Miars left him to head for his office in Gaylord, Service telephoned Charles “Chas” Marschke, Esquire, the Detroit-based whiz who managed the money Service had inherited.

Per usual, the uber-composed Marschke listened politely as Service outlined what he wanted.

“Have you thought this through, Grady?”

“That should get us started.”

“First thing is that people will laugh, and after they think about it, they’re likely to get real annoyed.”

“Do you have a time frame in mind?”

Service thought for a moment. “July third, the day before Independence Day. People will be off work. It will catch some attention.”

Service looked at what he had written on the napkin, and smiled.
“Fellow violators—poach away. Michigan’s game wardens don’t have the $$ to come after you.”

On the way west on US 2 in the Upper Peninsula, Service stopped at Duquette Lake. A large dog was in the water off a sandy spit, pawing and hopping like it was overrun by mosquitoes, flies, fleas, or an evil spirit. Deer went to water when overwhelmed by bugs, but this was a pit bull, maybe
seventy-five pounds of muscle, gristle, and blocky snout, and it was hyperactive in its splash-fest. His heart began to race.

“She’s a beaut, eh?” a voice said from behind him.

A joke?
“Not your normal female name,” Service said.

“I want her to think she’s a male, so she can have the power gender confers without earning it.”

Sheesh. Is the old coot batty? Hard to say. There was a certain eloquence, something in his voice
. “What’s she got in the water?”

“A large rock,” the man said. “It’s a metaphor for the lives we all live—fruitless, without meaning, filled with activities that consume time and accomplish nothing. She rolls the rock onto the beach. Then she rolls it back into the water. She will do this without pause until I call her back to me. I am like her five o’clock factory whistle, but of course I would never work her like people work each other. It’s in the pit bull’s blood to do this without revolting. As with most humans.”

“Big rock,” Service noted.
One that looks like a human head, the dog a cannibal diligently tenderizing it for the stewpot.
He looked away.

“Something we can do for you?” the old man asked.

“Nothing I can think of,” Service said. Over his years with his own dog, Newf, his irrational phobia about dogs of all sizes had finally begun to relent, but seeing this pit bull had brought it flooding back, full force.

“Would you like to meet her?” the stranger asked. “She’s a gentle, affectionate creature.”

“Ah,” the man said. “The ubiquitous social lie. There will never be another time. We hear this all the time. Mankind clings to appearances over substance, even when a different species is in the mix.”

The Yoop draws hink kings like rotting flesh draws blowflies to lay their eggs.
He found himself shaking over the brush with the pit bull when he got into his unmarked black Tahoe, and lit a cigarette to settle his nerves.