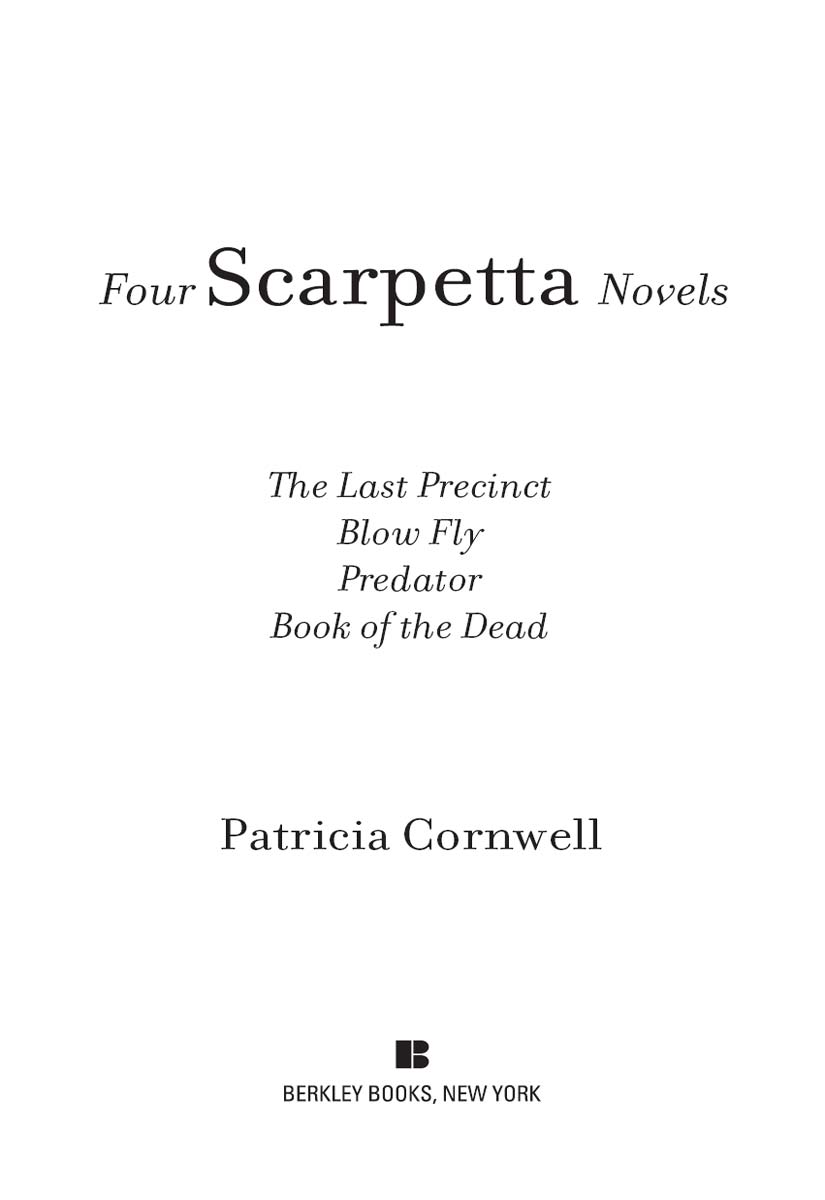 Portrait of a Killer: Jack the RipperâCase Closed

Ruth, A Portrait: The Story of Ruth Bell Graham

(also published as
A Time for Remembering: The Story of Ruth Bell Graham)

Food to Die For: Secrets from Kay Scarpetta's Kitchen

Book of the Dead
The Last Precinct
Blow Fly
Predator

Book of the Dead
Patricia Cornwell

Copyright Â© 2007 by Cornwell Enterprises, Inc.
All rights reserved. No part of this book may be reproduced, scanned, or distributed in any printed or electronic form without permission. Please do not participate in or encourage piracy of copyrighted materials in violation of the author's rights.
Purchase only authorized editions.
Published simultaneously in Canada

This is a work of fiction. Names, characters, places, and incidents either are the product of the author's imagination or are used fictitiously, and any resemblance to actual persons, living or dead, businesses, companies, events, or locales is entirely coincidental.

This book is dedicated
to my publisher,
Ivan Held.

Water pours slowly from an old brass spout, and darkness pours through a window. On the other side of old, wavy glass is the piazza, and the fountain, and the night.

She sits quietly in water, and the water is very cold, with melting ice cubes in it, and there is little in her eyesânothing much there anymore. At first, her eyes were like hands reaching out to him, begging him to save her. Now her eyes are the bruised blue of dusk. Whatever was in them has almost left. Soon she will sleep.

“Here,” he says, handing her a tumbler that was handblown in Murano and now is filled with vodka.

He is fascinated by parts of her that have never seen the sun. They are pale like limestone, and he turns the spigot almost off, and the water is a trickle now, and he watches her rapid breathing and hears the chattering of her teeth. Her white breasts float beneath the surface of the water, delicate like white flowers. Her nipples, hard from the cold, are tight pink buds. Then he thinks of pencils. Of chewing off nubby pink erasers when he was in school, and telling his father and sometimes his mother that he didn't need erasers because he didn't make mistakes. When in truth, he liked to chew. He couldn't help it, and that also was the truth.

“You'll remember my name,” he says to her.

He knows why she says it: If she forgets his name, her destiny will be rethought like a bad battle plan.

“Say it,” he says, looking at her tan arms, pebbly with goose bumps, the blond hair on them erect, her young breasts and the darkness between her legs underwater.

“And you think that's amusing,” he says, naked, sitting on the lid of the toilet.

She shakes her head vigorously.

Lying. She made fun of him when he told her his name. She laughed and said Rambo is make-believe, a movie name. He said it's Swedish. She said he isn't Swedish. He said the name is Swedish. Where did she think it came from? It's a real name. “Right,” she said. “Like Rocky,” she said, laughing. “Look it up on the Internet,” he said. “It's a real name,” he said, and he didn't like that he had to explain his name. This was two days ago, and he didn't hold it against her, but he was aware of it. He forgave her because despite what the world says, she suffers unbearably.

“Knowing my name will be an echo,” he says. “It makes no difference, not in the least. Just a sound already said.”

“I would never say it.” Panic.

“You realize I asked you nicely,” he says.

She says she understands, and her eyes scatter like flying shards of glass as he opens the toolbox, and her scattered gaze fixes on the box cutters and knives and fine-tooth saws. He lifts out a small bag of sand and sets it on the edge of the sink. He pulls out ampules of lavender glue and sets them down, too.

He has ordered her not to say it again. But she just did.

His hands dip into the water, and the coldness of the water bites him, and he grabs her ankles and lifts her up. He holds her up by her cold, tan legs with their cold, white feet and feels her terror in her panicking muscles as he holds her cold ankles tight. He holds her a little longer than last time, and she struggles and flails and thrashes violently, cold water splashing loudly. He lets go. She gasps and coughs and makes strangling cries. She doesn't complain. She's learned not to complainâit took a while, but she's learned it. She's learned all of this is for her own good and is grateful for a sacrifice that will change his lifeânot hers, but hisâin a way that isn't good. Wasn't good. Can never be good. She should be grateful for his gift.

He picks up the trash bag he filled with ice from the ice maker in the bar and pours the last of it in the tub and she looks at him, tears running down her face. Grief. The dark edges of it showing.

“We used to hang them from the ceiling over there,” he says. “Kick them in the sides of their knees, over and over. Over there. All of us coming into the small room and kicking the sides of their knees. It's excruciatingly painful and, of course, crippling, and, of course, some of them died. That's nothing compared to other things I saw over there. I didn't work in that prison, you see. But I didn't need to, because there was plenty of that type of behavior to go around. What people don't understand is it wasn't stupid to film any of it. To photograph it. It was inevitable. You have to. If you don't, it's as if it never happened. So people take pictures. They show them to others. It only takes one. One person to see it. Then the whole world does.”

She glances at the camera on the marble-top table against the stucco wall.

“They deserved it anyway, didn't they?” he says. “They forced us to be something we weren't, so whose fault was it? Not ours.”

She nods. She shivers, and her teeth chatter.

“I didn't always participate,” he says. “I did watch. At first it was difficult, perhaps traumatic. I was against it, but the things they did to us. And because of what they did, we were forced to do things back, so it was their fault that they forced us, and I know you see that.”

She nods and cries and shakes.

“The roadside bombs. Kidnapping. Much more than you hear about,” he says. “You get used to it. Just like you're getting used to the cold water, aren't you?”

She isn't used to it, only numb and on her way to hypothermia. By now her head pounds and her heart feels as if it will explode. He hands her the vodka, and she drinks.

“I'm going to open the window,” he says. “So you can hear Bernini's fountain. I've heard it much of my life. The night's perfect. You should see the stars.” He opens the window and looks at the night, the stars, the fountain of four rivers, and the piazza. Empty at this hour. “You won't scream,” he says.

She shakes her head and her chest heaves and she shivers uncontrollably.

Her nose runs and tears spill and she shakes. The energy in her eyesâit's not what it was when he met her, and he resents her for ruining who she was to him. Earlier, much earlier, he spoke Italian to her because it changed him into the stranger he needed to be. Now he speaks English because it no longer makes a difference. She glances at his excitement. Her glances at his excitement bounce against it like a moth against a lamp. He feels her there. She fears what's there. But not as much as she fears everything elseâthe water, the tools, the sand, the glue. She doesn't comprehend the thick black belt coiled on the very old tile floor, and she should fear it most of all.

He picks it up and tells her it's a primitive urge to beat people who can't defend themselves. Why? She doesn't answer. Why? She stares at him in terror, and the light in her eyes is dull but crazed, like a mirror shattering right in front of him. He tells her to stand, and she does, shakily, her knees almost collapsing. She stands in the frigid water and he turns off the spout. Her body reminds him of a bow with a taut string because she's flexible and powerful. Water trickles down her skin as she stands before him.

Water quietly laps in the tub as she turns away from him, facing old, cracked stucco and a closed shutter.

She kneels, facing the wall, and he picks up the belt and slides the end of it through the buckle.