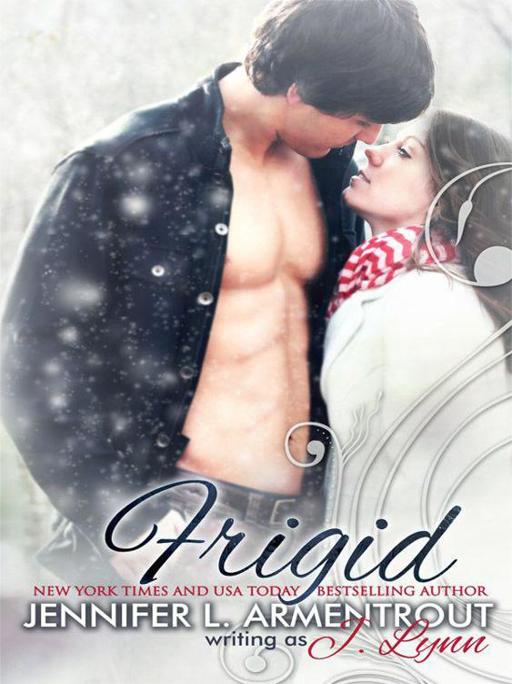 Sale of the paperback edition of this book without its cover is unauthorized.

This book is a work of fiction. Names, characters, places, and incidents are products of the author’s imagination or are used fictitiously. Any resemblance to actual events, locales, or persons, living or dead, is entirely coincidental.

All rights reserved, including the right to reproduce this book or portions thereof in any form whatsoever.
Contact: Spencer Hill Press, PO Box 247, Contoocook, NH 03229, USA

A college student in love with her best friend ends up trapped alone with him at a ski lodge.

“Itty Bitty Titties” David Allen Coe. Used in parody,
because that song should ALWAYS be used in parody.

To every book lover, big and small, these books are for you
.

I was in love with my best friend.

And it could be worse, I guessed. I could have been in love with a male stripper or a drug addict. Kyler Quinn was neither of those things. Although he could easily be passed off as a male stripper with those jaw-dropping good looks and messy brown hair, and he was as addictive as any drug out there.

I saw him before he even knew I was here. There was no way anyone could miss Kyler, not even in the packed Dry Docks, where everyone from the University was out celebrating the start of winter break. People flocked to him, especially the girls.

I didn’t want to say that Kyler looked like a god, because sculptures of Greek and Roman gods typically didn’t fall on the attractive side of things. And they were all really small
down there
. I doubted he was hurting in that department, since there was an endless train of women who came back for seconds and thirds. But he was beautiful in a purely masculine way. A nose with a slight hook in it offset broad cheekbones, defined jaw, and wide expressive lips. He’d broken his nose in a fight freshman year

I still felt bad for that nose.

And when he smiled? Aw man, the boy had the deepest dimples ever.

His eyes were a warm brown, the color of a rich coffee bean that darkened whenever he was feeling froggy, and I bet he was feeling all kinds of froggy right now.

Right in the middle of the bar, I stopped and leaned my head back. Exhaling loudly, I really wanted to punch myself in the face. Not only was Kyler completely off-limits due to the fact that we’d been inseparable since the day he pushed me off the merry-go-round and told me I had cooties for trying to hold his hand. I’d retaliated by holding him down and forcing him to eat a mud pie the following day. People had a hard time understanding how we were so close. Even I couldn’t figure it out. We went together like a lion and a gazelle. Actually, we went together like a lion and a gimpy gazelle that had no chance of outrunning the predator.

I was the gimpy gazelle.

As I made it closer to the table he and our friend Tanner occupied, a blonde with legs longer than I was tall plopped down in Kyler’s lap. His arms went around the girl’s impossibly narrow waist, and a stupid, totally inexcusable sharp pain sliced through my stomach.

Yeah, Kyler might not be a stripper, an addict, or a terrorist, but he
was
a player.

Veering back toward the bar at the last minute, I almost plowed straight into someone’s back. I rolled my eyes. Giving myself a concussion would be perfect. Multicolored Christmas lights dangled from the edge of the bar and I thought that was kind of hazardous with all the drunks spilling their drinks. I found an empty stool at the bar and waited for the bartender to notice me. And it was easy to notice me. I looked like I was sixteen, so they usually checked my ID right away. The bartender appeared, asked for the standard, and I ordered the standard—a Diet Coke with rum.

Over the hum of conversation and music, a giggle teased my ears. It was like some kind of damn beacon. No good would come from looking, and there was no reason to ruin the night already. I crossed my ankles. Placed my hands on the bar. Tapped my fingers to the song I was barely paying attention to. Stared at the rack of liquor bottles my other best friend was intimately familiar with.

But I looked, because I was a girl and diving head-first into girl-stupid.

Blondie was straddling Kyler. Her short denim skirt had ridden all the way up her thighs. One would think it wasn’t winter outside based on how she was dressed, but then again, I’d wear a skirt like that all the time if I had her legs.

His back was to me, but he must’ve said something interesting in her ear, because she laughed again. Her hot pink nails dug into his shoulders, bunching the material of his black sweater. Then she reached up, running her hands through the hair at his forehead, tugging it back.

I couldn’t look away now. Like a fat glutton for punishment, I was fixated on them.

He tilted his head to the side and tipped it back. I could see half his face now, and he was grinning. Not the big smiles that revealed those totally lickable dimples, but I knew he was rocking that half-grin of his—the infuriating and incredibly sexy half-grin. His hands settled on her hips.

“Here you go.” The bartender placed my drink down.

Turning away from what was about to go down over there, I glanced up at the bartender as I knocked a strand of long black hair out of my face. “Thank you.”

He winked. “No problem.”

The bartender ambled off to help someone else, while I was left to wonder why he’d winked. Thinking I probably shouldn’t have let Kyler talk me into coming out tonight, I picked up my glass and took a larger than normal gulp. I forced myself to swallow the bit of alcohol, even as it burned my throat.

Just as I placed my drink down, I was hugged from behind. The vanilla-scented perfume and high-pitch squeal gave away the culprit.

“You’re here! I saw you from the other side of the bar and tried to get your attention,” Andrea said, spinning me around the bar stool. Her red curls were twisted in every which direction. My roommate looked like Little Orphan Annie all grown up…if Little Orphan Annie had a potential drinking problem. As evidenced by the beers she was double-fisting.

“How much have you had to drink?” I asked.

She rolled her eyes. “This beer’s for Tanner, you bitch.”

“Since when do you get beers for Tanner?”

Tanner and Andrea were weird. They’d met last year and it was hate at first sight. Somehow they kept ending up in the same places, and I guessed they tripped and fell on each other’s lips or something. They’d made out a few times, fought a lot more, and now she was serving him drinks. I could never figure them out.

“How long have you guys been here?” I asked.

“About an hour.” She wiggled her way between me and some girl on the other stool. “Kyler’s Official Girl Parade has been in full force.”

“Yeah, I noticed that you saw. That’s why you weren’t paying a bit of attention to me.” She took a swig of beer. “You coming to the table?”

To the table where Blondie was practically dry humping Kyler? Sign me up. “I’ll be over in a little bit.”

She pouted. “You need to hurry your little ass up and come to the table. Kyler will run the girl off if you’re over there, and then I don’t have to worry about catching herpes.”

“Herpes isn’t airborne,” I told her.

“Yeah, you say that now, but then it mixes with chlamydia and genital warts then you have a super-strain of herpes.” Her nose wrinkled. “You breathe it in, and then bam! You’ll need antiviral therapy for life.”

Andrea was planning on going to med school after college, and I thought she needed to take a few of her classes over again if she believed that was possible. But I knew what the real problem was, and it wasn’t the gift that kept giving.

Where there was one girl after Kyler, there were at least two or three more girls hanging on the outskirts. I looked over my shoulder. Yep. Two girls. Andrea didn’t want me over there to make sure Kyler behaved. She was just as good at hiding her feelings as I was.

She didn’t want one of those other girls to fall into Tanner’s lap, which looked close to happening. One of the girls was chatting it up with the tattooed, buzz-cut police officer’s son. Tanner appeared only half-interested, saying something to Kyler. Blondie wasn’t happy with the lack of attention. She twisted around, scooped up a piece of ice out of a drink on the table and popped it in her mouth. With her other hand, she tugged Kyler’s head toward hers as she bent her head down.

“Oh, look at that.” Andrea sighed. “I think I saw that once in an 80s movie. Do you think that girl has any sense of shame?”

My stomach dipped like I was poised atop a rollercoaster. It wasn’t about not having shame. It was all about going for what you wanted. Part of me envied Blondie—a really huge Kyler-sized part of me. “I seriously hope their mouths aren’t touching, because now all I’m thinking about is herpes.”

Andrea pushed off the bar. “Uh…”

Their lips were touching.

A second later Kyler leaned back, his jaw working as he chewed what I assumed was the piece of ice Blondie had so openly shared.

“Ugh,” I murmured, turning back around. Andrea winced, because she knew…she was the only person who knew. “I’ll be over in a little while. Going to finish my drink first.”

“Okay.” She smiled, but sadness crept into her eyes. “Sydney…”

Now I felt like a lame turd. “It’s all right, really. I’ll be right over.”

“After you finish your drink?” When I nodded, she sighed. “You never finish a drink, but I’ll be waiting. Don’t take forever.” She started to turn and then whipped back to me, nearly losing a bottle of beer. “Actually, take your time.”

Her smile spread. “Look who just came in.”

I craned my neck to follow her gaze. “Oh.”

“‘Oh’ is right.” Andrea bent down and kissed my cheek. “Forget about Kyler the man-slut. You’re better than that. But him?” She nodded at the door. “That’s a keeper who’s more than willing to end your celibacy.”

Heat swamped my cheeks. Before I could argue the use of the word “celibacy,” Andrea had skipped off and I was left staring at Paul Robertson.

Paul was new to our group; I’d met him in my Cognitive Processes lab. He…he was good-looking. He was nice and funny. He was perfect, really, but…

He stopped just at the edge of the dance floor, tugging off his skull cap. Scanning the bar, he smoothed a hand over his blond hair. His eyes met mine and a quick grin spread across his face. Giving me a little wave, he easily navigated the group of people huddled around round tables.

Paul would be perfect for me right now, and for that very reason alone, I needed to stop thinking about the unattainable and start thinking about what was right in front of my face.

Taking a deep breath, I mustered up what I hoped was a sexy smile. There was no better time than tonight.