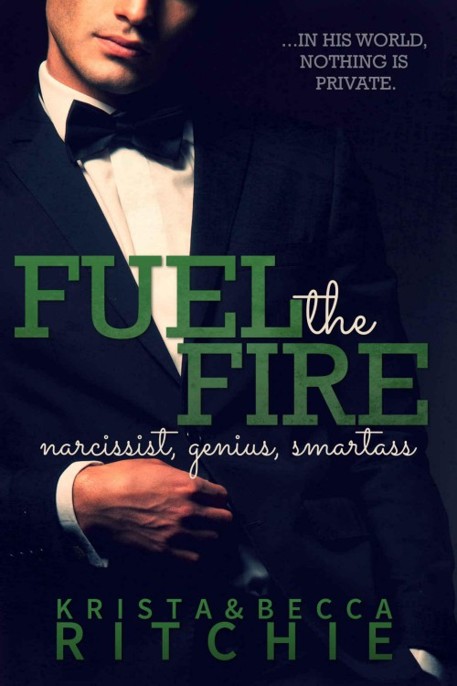 This book may not be reproduced or transmitted in any capacity without written permission by the publisher, except by a reviewer who may quote brief passages for review purposes.

This book is a work of fiction. Names, characters, places, and incidents either are products of the authors’ imaginations or are used fictitiously. Any resemblance to actual persons, living or dead, events, or locales is entirely coincidental.

Addicted to You
(Addicted #1)

Addicted After All
(Addicted #3)

More information about the reading order can be found on
Fizz Life
.

A NOTE FROM THE AUTHORS

It's
highly recommended
to read the books in the recommended reading order, which is in tangent with the Addicted series. However, if you choose not to read Addicted After All before Fuel the Fire, there will be a time jump.

“Name?” Behind a desk, a woman shuffled through white cards with crimson lanyards attached.

“Richard Connor Cobalt.” I gave her an amiable smile.

She procured the corresponding nametag. “Welcome to this year’s Model UN, Richard. Good luck.” Her last phrase—while nothing more than a meaningless farewell—punctured a part of my head, poking at a nerve.

I liked having control of my fate. And luck meant that I had none. That I’d have to let someone inferior decide
my
outcome. I understood that some judges were biased, most of which I could likely outwit. But climbing over people was my specialty. I wasn’t battling a slot machine or a computer.

I would beat the judges. I would win.

Instead of wearing my irritation, I gave her another relaxed smile and put the lanyard around my neck. She was staring at me like I was a teenage boy trying to play the role of a grown man. It was that look that dug beneath my skin, the expression that said I was small and undeserving because I was only just fifteen.

“You should remember my name,” I said.

She laughed hesitantly. “I’ll try, but there are a lot of you.”

“And yet, I’m the only one you’ll see win every year.”

Her uncertainty only grew like
did I hear you right? Did you mean what I think you did?

My eyes barely flickered to her laminated pin and then I gestured absentmindedly to her stack of cards. “The twenty-seventh nametag is out of place. Rolland comes before Rose.” I smiled again. “Good luck, Marianne. You’ll need it.”

I was a prick.

A conceited, arrogant son of a bitch.

But to me, there was nothing more frustrating, more exasperating than being deemed unworthy for the pure fact that I was younger than whomever I faced. My thoughts, my ideas never mattered to most adults. To have someone seriously listen to me, as an equal, was nearly impossible. I was simply “a kid”—an intelligent kid but not one whose thoughts superseded theirs.

I would never talk down to an infant the way that people talked down to me, a fifteen-year-old.

I knew that I’d gain respect with age. I had to
wait
on some absurd timeline created by society.
Bullshit
, I thought. Life was bullshit, and the only way for it to not grate at me was to play along.

And so I always did.

She stared at me, open-mouthed and unsure.

I waved her goodbye, and my grin spread across my face as I walked down the lobby hallway, my leather duffel slung on my shoulder.

After I signed in, I headed towards the elevators. The hotel had sectioned off a number of floors for competitors. Faust Boarding School for Young Boys would take the sixth floor with three other preparatory schools.

Fourteen to eighteen-year-olds already rode up and down the glass elevators in boredom or with actual places to be, like me.

Guys in burnt orange blazers shuffled off the elevator. I entered and pressed the sixth floor button, tempted to hit the “close doors” button as well. But I waited, watching two girls approach. The taller one with glossy brown hair had these hellfire eyes that struck me as malevolent, pinpointed and blazing. No matter which direction she turned. Her mouth moved at a rapid pace, gesticulating angrily as she talked.

I couldn’t hear her, too much noise interference from people congesting the hotel.

I scrutinized the girls from afar. No nametags, so they hadn’t signed in yet. Both wore navy-blue plaid skirts, their white-collared blouses tucked in. I caught sight of the embroidered insignias along the breast pocket: Dalton Academy.

I didn’t have any preconceived notions of the co-ed private school. Last year, we beat them. And the year before that, we had no trouble. I assumed this year would be the same.

“No, I’m
not
letting it go. It’s utter bullshit, Lydia,” the taller girl cursed. They slipped into the elevator, the girl too pissed to realize that she needed to press a button, and I was too curious to interrupt.

“The manager had a point,” Lydia said with resignation. She had a slender frame, freckles, and one long, red braid.

The other girl placed her hands on her hips, fuming. She choked the elevator with each heavy inhale.

I grazed her from head to toe: black high heels, dark red lipstick, sleek brown pony and those tyrannical yellow-green eyes, burning holes into the glass. I was sharing an elevator with a tempestuous, electric storm that I refused to calm. I always wished to be swept into madness, if only for a moment, to truncate the mundane, ordinary moments of my existence.

“His argument was that three
girls
can fit in a king-sized bed, but three
boys
can’t. So we have to take the worse room when management booked the same suite twice. Do you see how ridiculous that is?”

“It’s true though. Boys are bigger than us.” Lydia shrugged.

The elevator doors slid shut and we rose.

“We’re sleeping in the suite we were assigned,” the girl refuted. “
They
can take the smaller room.”

“They won’t agree to it,” Lydia said.

“You just don’t want to argue with them about it,” the girl retorted. “If you want to stay quiet, that’s fine, but I can’t let the Faust boys win. Half of them believe they piss gold and the other half walk around like they created the earth and sky.”

I lowered my head to hide my grin. I was part of the latter half.

She continued, standing taller, “Their heads are so inflated that I will
cheer
when someone decapitates them at the neck.”

I could barely hold back from laughing. I stared at the ceiling, my lips curving upward even more.

Never in my life.

I had most of the details I needed to understand the events. Management double-booked the same suite with Dalton and Faust and now they were telling one of them to move.

Lydia softened her voice. “The Faust boys are intimidating for a reason. Sebastian said they win Outstanding Delegation every year.”

“Every year that
we
weren’t here,” the girl rebutted.

That pushed me to speak. “I don’t think we’ve met.” I turned towards them, and the girls shifted their stances, finally acknowledging the third person on the elevator.

They both perused my towering frame. At fifteen, I was six-foot and still growing. My wavy brown hair was styled perfectly, my brow arched in mock contemplation, and I wore a black blazer with a crimson tie.

I held out my hand to her first. “Nice to meet you.”

She shook it, her palm clammy and her grip limp.

When I turned to the other girl, she crossed her arms over her chest and tapped her heel repeatedly. I waited for her to introduce herself. I wanted to know her name. Badly. I ached to hear it. Any part of it.

I told her, “You’re my greatest competition.” I hoped she’d soften at the compliment. Whether I spoke true or not, I had no clue yet. She remained tense, and the doors began to slide open on the sixth floor,
my
floor.

She didn’t answer me. She pushed past to exit.

Lydia sprinted to catch up to her friend. “Rose,” she called out.

I stepped into the hallway with a wider grin, and Rose glanced over her shoulder with a scathing glare, knowing Lydia just unleashed what Rose denied me. I didn’t have to check my room card again. I was 643, one of the balcony suites that overlooked the café and courtyard in the middle of the hotel.

I thought, for a split second, that maybe I was in the double-booked room too. The chance was microscopic, but it wasn’t improbable.

As soon as I saw Dillon and Henry waiting at the door marked 643 with another Dalton girl—all of them glowering—I realized that I belonged to this fight too.

“Management gave you a new room,” Rose lied to Dillon, passing keycards to the blond-haired sixteen-year-old.

The second I approached, her brows knotted in confusion.

“Dude.” Dillon nudged my arm. “They double-booked us with these Dalton girls.”

I didn’t take my eyes off Rose. “I heard.” I grabbed Dillon’s keycards and passed them back to Rose.

Realization washed over her face.

This was my suite too. And no one ever took what was mine. Not unless I willingly gave it to them, and I wouldn’t just give her this room. I didn’t want to cram in the same bed with Dillon and Henry. I wanted the living room, the extra desk, the couch, more quiet space to study.

But so did Rose.

“Just switch with us,” Rose tried it this way. “It’s the polite thing to do.”

She let out a small growl. “What do you want for it?”

My brows lifted.
Be careful
,
Rose
, was my first thought. I knew she was fourteen, if this was her first year competing, and maybe, just maybe, she was willing to do anything to win.

“Let’s play a game,” I said, dropping my duffel on the ground. “The winner will take the suite. The loser gets the smaller room.”

“Smaller room?” I heard Henry huff behind me, realizing that Rose was going to fool him into switching.

“What kind of game?” Her voice was frosted with ice.

“Trivia.” It took us another ten minutes to sort out the details. All six of us wrote down categories on slips of paper and put them in Dillon’s baseball hat. Only Rose and I would compete. Dillon and Henry knew my IQ was higher than theirs. And both girls, Lydia and Anna, pointed immediately to Rose. Whether they were scared to go against me or whether she was merely smarter than them, I didn’t know yet.

Rose opened her red handbag on the crook of her arm and acquired a quarter. “We’ll flip.” She called tails, and I lost to chance. But I wouldn’t lose to anything else.

She plucked a paper from the hat. “Egyptian Mythology.” According to our rules, we had to create questions without using any reference material.

I wondered if she could even do this part.

I waited. And her eyes met mine in a harsher glare. “God of wisdom and learning,” she challenged.

My lips twitched into a smile. “Thoth.”

She knew I was right, but her shoulders still pulled back, not giving up.

“Is he right?” Dillon asked Henry who sat on the ground with his laptop propped open.

Fatal Glamour by Paul Delany
Diamond Mask (Galactic Milieu Trilogy) by May, Julian
Taste of Lacey by Linden Hughes
A View From a Broad by Bette Midler
Out Of The Smoke by Becca Jameson
After Math by Denise Grover Swank
Beyond Lucky by Sarah Aronson
Fairy Tales from the Brothers Grimm: A New English Version by Philip Pullman
Diary of a Crush: Kiss and Make Up by Sarra Manning
The Pleasure's All Mine by Kai, Naleighna