Further Tales of the City 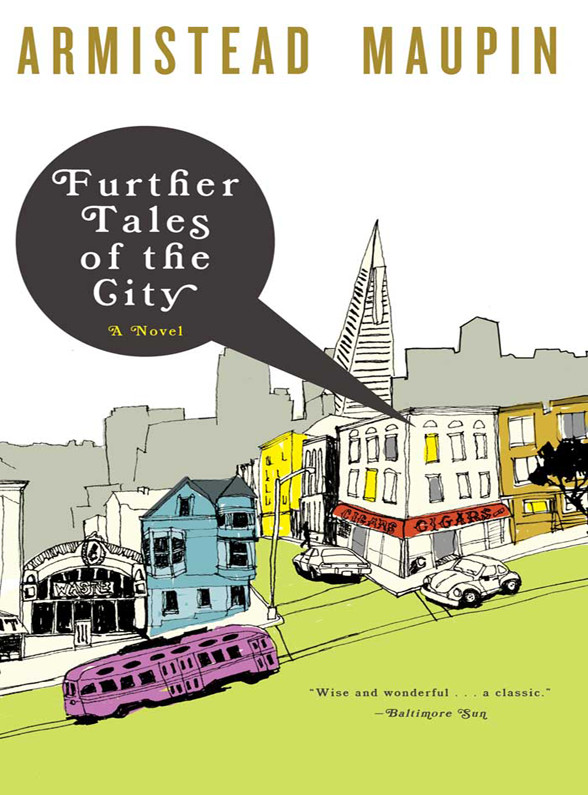 Surely there are in everyone’s life certain
connections, twists and turns which pass awhile
under the category of Chance, but at the last, well
examined, prove to be the very Hand of God.

The A Gays Gather

The Man in Her Life

We Must Have Lunch

Prayers for the People

Give a Little Whistle

Wishing Upon a Star

Womb for One More

Letter from the Road

The Trouble with Dad

A Starr Is Born

Keeping Up with the Joneses

I See by Your Outfit …

The First to Know

A Sucker for Romance

On the Home Front

To Russia with DeDe

Four on the Phone

When the Children Are Asleep

The Way They Were

Dead to the World

Back in Her Own Backyard

Praise for Further Tales of the City

T
HERE WERE OUTLANDERS, OF COURSE, WHO CONTINUED
to insist that San Francisco was a city without seasons, but Mrs. Madrigal paid no heed to them. Why, the signs of spring were everywhere! Those Chinese schoolboys, for instance, sporting brand new green-and-yellow baseball caps as they careened down Russian Hill on their skateboards.

And what about old Mr. Citarelli? Only a seasoned San Franciscan could know that this was
exactly
the time of year he dragged his armchair into his garage and opened the door to the sunshine. Mr. Citarelli was infinitely more reliable than any groundhog.

Here on Barbary Lane, the vernal equinox was heralded by an ancient scarlet azalea that blazed like a bonfire next to the garbage cans. “My goodness,” said Mrs. Madrigal, stopping to adjust her grocery bag. “It’s you again, is it?” It had also bloomed in August and December, but nature was always forgiven for offering too much of a good thing.

When Mrs. Madrigal reached the lych gate at Number 28, she paused under its peaked roof to survey her domain—the
mossy brick plain of the courtyard, the illegal lushness of her “herb garden,” the ivy-and-brown-shingle face of her beloved old house. It was a sight that never failed to thrill her.

Dropping the groceries in the kitchen—three new cheeses from Molinari’s, light bulbs, focaccia bread, Tender Vittles for Boris—she hurried into the parlor to build a fire. And why not? In San Francisco, a fire felt good at any time of year.

The firewood had been a Christmas gift from her tenants—a whole cord of it—and Mrs. Madrigal handled it as if she were arranging ingots at Fort Knox. She had suffered too long under the indignity of those dreadful pressed sawdust things they sold at the Searchlight Market. Now, thanks to her children, she had a fire that would
crackle.

They weren’t really her children, of course, but she treated them as such. And they appeared to accept her as a parent of sorts. Her own daughter, Mona, had lived with her for a while in the late seventies, but had moved to Seattle the previous year. Her reason had been characteristically cryptic: “Because … well, because it’s The Eighties, that’s why.”

Poor Mona. Like a lot of her contemporaries, she had capitalized The Eighties, deified the new decade in the hope that it would somehow bring her salvation, deliver her from her own bleak vision of existence. The Eighties, for Mona, would be the same in Seattle as in San Francisco … or Sheboygan, for that matter. But no one could tell her that. Mona had never recovered from The Sixties.

And she loved them dearly for that.

Minutes later, Michael showed up at her door with his rent check in one hand and Boris in the other.

“I found him on the ledge,” he said, “looking faintly suicidal.”

The landlady scowled at the tabby. “More like homicidal. He’s been after the birds again. Set him down, will you, dear? I can’t bear it if he has bluejay on his breath.”

She waved it away with her hand, hastily tucking the check into a half-read volume of Eudora Welty stories. She found it excruciating to discuss money with her children. “Well,” she said, “what shall we do about Mary Ann’s birthday?”

“God,” winced Michael. “Is it that time already?”

Mrs. Madrigal smiled. “Next Tuesday, by my calculations.”

“I don’t think that should be our emphasis, dear.”

“Well, don’t expect any mercy from me,” said Michael. “She put me through hell last year on
my
thirtieth. Besides, she’s the last one in the house to cross The Great Divide. It’s only proper that we mark the event.”

Mrs. Madrigal shot him her Naughty Boy look and sank into the armchair by the hearth. Sensing another chance to be picturesque, Boris dove into her lap and blinked languidly at the fire. “Can I interest you in a joint?” asked the landlady.

Michael shook his head, smiling. “Thanks. I’m late for work, as it is.”

She returned his smile. “Give my love to Ned, then. Your new haircut looks stunning, by the way.”

“I like seeing your ears, actually. It makes you look quite boyish. Not at all like you’ve crossed The Great Divide.”

Michael showed his appreciation with a courtly little bow.

After he had left, she permitted herself a private grin over this Great Divide business. She was sixty now, for heaven’s sake. Did that mean she had crossed it twice?

Sixty. Up close, the number was not nearly so foreboding as it had once been from afar. It had a kind of plump symmetry to it in fact, like a ripe Gouda or a comfy old hassock.

She chuckled at her own similes. Is that what she had come to? An old cheese? A piece of furniture?

She didn’t care, really. She was Anna Madrigal, a self-made
woman, and there was no one else in the world exactly like her.

As that comforting litany danced in her head, she rolled a joint of her finest sensemilla and settled back with Boris to enjoy the fire.

F
OR ALMOST THREE YEARS NOW MICHAEL TOLLIVER HAD
been manager of a nursery in the Richmond District called God’s Green Earth. The proprietor of this enterprise was Michael’s best friend, Ned Lockwood, a brawny forty-two-year-old who was practically the working model for the Green-collar Gay.

Like Michael, Ned hadn’t always been a Green-collar Gay. Back in the early sixties, when he was still a student at UCLA, he had paid his tuition by pumping gas at a Chevron station in Beverly Hills. Then one day a famous movie star, fifteen years Ned’s senior, stopped in for an oil change and became hopelessly smitten with the lean, well-muscled youth.

After that, Ned’s life changed radically. The movie star wasted no time in setting up house with his newfound protégé. He paid for the remainder of Ned’s education and incorporated him—as much as propriety and his press agent allowed—into his life in Hollywood.

Ned held his own quite well. Blessed with a sexual aura that bordered on mysticism, he proceeded to win the heart of every man, woman and animal that crossed his path. It was not so much his beauty that captivated them but his innate and almost childlike gift for attentiveness. He listened to them in a town where no one ever listened at all.

The love affair lasted almost five years. When it was over, the two men parted as friends. The movie star even helped subsidize Ned’s move to San Francisco.

Ned and Michael had gone to bed together twice—in 1977. Since then, they had been friends, co-conspirators, brothers. Michael loved Ned; he shared his romantic exploits with the older man like a small dog who drags a dead thing home and lays it adoringly on the doorstep of his master.

Michael looked up from the task at hand. He was boxing primroses for a Pacific Heights realtor who had fretted far too long over a choice of the pink or the yellow. The realtor eyed Ned bitchily, then resumed his fussing:

“Of course, there
are
some potted fuchsias on the deck and those are sort of purplish. I mean, the purple might not even
go
with the yellow. What do you think?”

Michael shot Ned an apologetic glance and tried to remain
patient with his customer. “All flowers go together,” he said evenly. “God isn’t a decorator.”

The realtor frowned for a split second, perhaps determining if the remark had been impertinent. Then he laughed drily. “But some decorators are God, right?”

“Not around my house,” smiled Michael.

The realtor leaned closer. “You used to know Jon Fielding, didn’t you?”

Michael rang up the purchase. “Something like that,” he replied.

“Not a bit.” He smiled nonchalantly, hoping he didn’t sound as feisty as he felt. “It’s been a long time, that’s all.” He slid the box of primroses in the direction of his inquisitor. “You know him, huh?”

The realtor nodded. “We did a fly-in together once. Gamma Mu.” He tossed out the name like bait, Michael noticed, as if
everyone
had heard of the national gay millionaires’ fraternity.

Michael didn’t bite. “Give him my best when you see him,” he said.

“Right.” The realtor simply stared for a moment, then reached over and stuffed his business card into the pocket of Michael’s coveralls. “This is who I am,” he said
sotto voce.
“You should come over one night. I have a Betamax.”

He left without waiting for a reply, passing Ned in the doorway.

“What about it?” asked Ned.

Michael looked at the realtor’s card long enough to read the name, Archibald Anson Gidde, then dropped it into the trash can. “Sorry, Ned, what did you say?”

Ned checked him out for a moment, then tousled his hair.

If You Ask Me by Betty White
El Manuscrito Hallado en una Botella by Edgar Allan Poe
Border Lord by Arnette Lamb
Doctor Who: Sontaran Experiment by Ian Marter
The Court of the Midnight King: A Dream of Richard III by Freda Warrington
Above the Law by Carsen Taite
The Last Days of Krypton by Kevin J. Anderson
Suze Orman's Action Plan by Suze Orman
2 Maid in the Shade by Bridget Allison
True To You (Taking Chances #2) by Liwen Ho