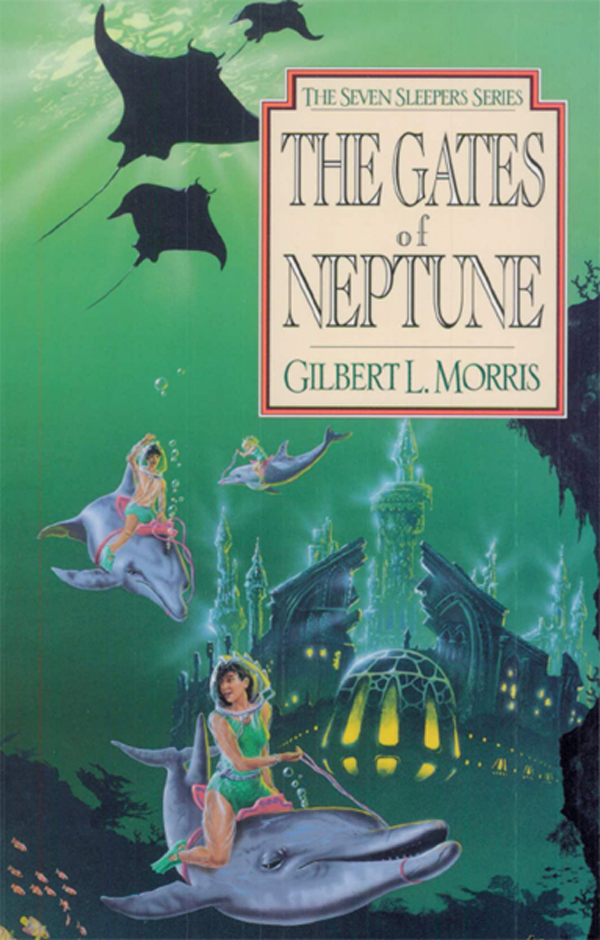 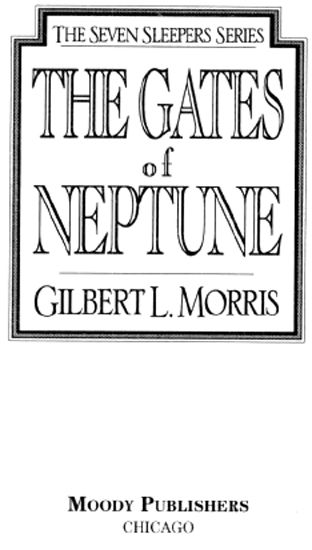 All rights reserved. No part of this book may be reproduced in any form without permission in writing from the publisher, except in the case of brief quotations embodied in critical articles or reviews.

We hope you enjoy this book from Moody Publishers. Our goal is to provide high-quality, thought-provoking books and products that connect truth to your real needs and challenges. For more information on other books and products written and produced from a biblical perspective, go to
www.moodypublishers.com
or write to:

TO THE O'KEEFE KIDS
â

May you all grow up to be as
fine and dedicated as you are now!

10. Monsters of the Deep

13. To the Gates of Neptune

16. The Strongest Force of All 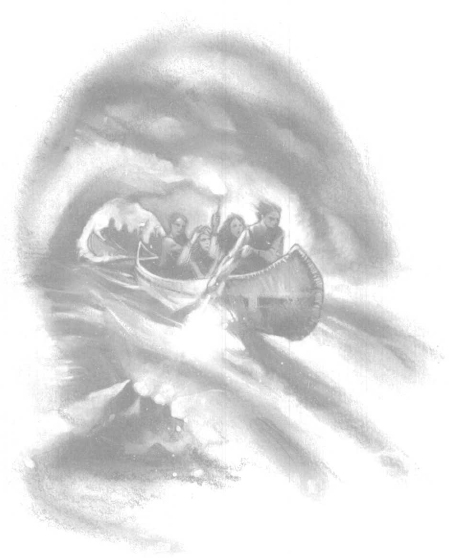 1
Out of the Frying Pan

T
he great stone door swung slowly to and fell into place with a click.

Even as he spoke, the angry cries of the soldiers of the Sanhedrin sounded, and they began to pound on the stone walls.

At his side, Sarah shivered. “We just barely made it, didn't we, Josh?”

“Yes. Inside, right now!” Calling their names, tall, lean, freckled Josh shoved his companions in quickly, pushing them one by one down the corridor that led to a gentle, downhill slope. “We've got to get away. They may break through the door.”

The company that made its way down through the dark passageway, lit only by torches at irregular intervals, was strange indeed. Sarah watched the group in front of her, thinking,
I never thought to see such creatures as these
â
not on this earth.
But she knew she was not on the old earth. She was on a planet completely changed by nuclear war. The changes had brought genetic transformation, so that Oldworld was gone and now new sub-species were to be seen.

She glanced again at the group ahead, those members of the new world who had been chosen to help keep the Seven Sleepers from the wrath of the Sanhedrin. Three of them were the strange looking “hunters”âone having huge eyes that could see, it seemed, forever; the second having great ears that flopped and wiggled; and the
third having a large, twitching nose, so that together the three made what was called the Hunter.

Next in line was the giant, Volka, larger than any human had ever been on earth. He had powerful, bulky muscles and a blunt but kind face. Then came two sets of twins, “Gemini twins,” who had to stay close together all their livesâMat and Tarn, and the females Amar and Rama. If they were separated, Sarah knew, they would die. And last came their friend Kybus.

“Look! There are some boats,” Jake called out. His red hair shone in the light of the torches. “Five of them. How did they know how many boats we'd need?”

“We can worry about that later,” Josh said. “Let's get aboard.”

One boat was required for the giant. The twins got in another, and Kybus and the Hunter in the next.

And they began to climb into the small, flimsy-looking boats.

“Wow,” Reb said, his pale blue eyes staring doubtfully at the little craft. “I wouldn't go fishing on the Mississippi in a thing like this.”

“It's what we have,” Josh said impatiently. “The Sleepers will bring up the rear. The rest of you, go on.”

“Yes,” Kybus said, his sharp face glowing with intelligence. “Come. I've got the feeling that we need to hurry. They have ways of breaking through stone walls.”

The first three boats shoved off, then Dave, Abbey, and Jake followed. Sarah sat down between Reb and Wash, and Josh took the stern, handling the paddle.

The current was swift, and Wash said, “I sure hope that this don't get fast. I can't swim a lick. Can the rest of you?”

As it turned out, Josh was the only one who could swim well, but he said, “Don't worry, this is easy. I've done a lot of canoeing, and if the current doesn't get any faster than this, we're all right.”

They glided along smoothly. The underground stream was black in the darkness. Only their hand-held torches cast reflections.

Somehow Sarah sensed that this was a very deep river. She had never liked boatingâor waterâand since she was not much of a swimmer, fear ran over her. But she said nothing.

They had glided along for perhaps half an hour when Josh said, “I think the current's getting faster.” He called ahead, “How is it up there?”

From far in front came the voice of Kybus, very faint, “Be careful, be careful.”

“I don't like this.” Wash's black face was tense, and his usual cheerful smile was gone. He clung to the sides of the boat. “Sure wish we could get out in the open.”

Reb, perhaps trying to lighten the situation, said, “You know what this is like?”

“Why, I went in one of them parks in Dallas, and they had a thing called the Log Ride. I got into that sucker and slid down all the way. And you know what?âit was fun!”

Josh said, “I've been there too, and it
was
fun, but this is a little different.” Suddenly he cried out, “Look, look up there!”

Sarah looked up and saw at once what he had seen.

“The ceiling's getting lower,” Josh said.

Far ahead, they heard a cry, and a cold chill ran down Sarah's back. Not only was the river beginning to boil, throwing forward the little boats at a speed that was terrifying, but was the ceiling closing in on them? Before, it
had been high enough so that their torches barely illuminated it, but now she saw that it was only a few feet above their heads.

“What if it plays out?” Reb asked suddenly. “What'll we do then?”

But was he feeling queasy himself? Sarah wondered. Was his stomach churning too? This closing in of the ceiling and the racing of the river were things he must have never counted on.

Another cry came from far ahead. “Look out!” And then silence.

“The tunnel's closing in!” Sarah cried. Now the ceiling was so close that she could almost reach up and touch it. “We're all going to drown!”

Sarah grabbed at Josh. She caught his arm, which he was using to paddle, and caused him to miss a stroke.

He said angrily, “Don't hold onto me, Sarah. I need to guide the boat.”

As if they hadn't enough trouble, suddenly the torches far ahead of them disappearedâjust flickered out, except for the one right in front containing the other Sleepers. “Are you all right?” Josh cried out. “Dave?”

Dave's voice floated back. “We're all right, but it looks like we're running out of river. I can't even see the others.”

The ceiling dropped lower and lower, and now it was as if the boat were being drawn into a giant whirlpool. The water was white. Its roaring as it streamed over the rocks was almost deafening. The fury of the rushing water and the sensation of being closed in were terrifying. Fear rose to grip Sarah, and then she heard Abigail scream.

And at that moment, though she had little use for Abigail's
manners, Sarah thought there was some excuse for the girl's terror.

There was a mighty roar then as the river seemed to reach a crescendo of sound, and Sarah gave up all hope. She crouched in the bottom of the boat, covered her ears with her hands, and began crying out to Goel for help.

And then, as if in answer to her cry, the roaring began to diminish. Sarah looked up to see that the ceiling was no longer right above her head but was risingâalmost magically, it seemed.

Sarah gasped in amazement. They had come into a huge cavern with a ceiling so high that it seemed to go up forever. The torches did not enable them even to see it. On each side, they began to pass huge stalactites and stalagmites that glittered like diamonds, reflecting the torchlight.

“I think that's a good idea.” Josh called out, “Dave, see that shore? I think we'd better pull in.”

“All right,” Dave called back.

The two boats turned toward a long, sloping beach in a side eddy of the river. As the first boat landed, Jake leaped out and pulled in the prow. Reb did the same for the second boat.

Soon everyone was out on the sand, and Reb was lighting other torches so that they could see what sort of place they were in.

“Well, I'm just glad to be anywhere,” Jake said. “I thought we'd had it back in that river.” He looked all around. “Where are the Nuworlders?”

Dave said, “Didn't you see that divide back there?”

“The river divided, and the other boats went the other way. I didn't have a chance to even make a choiceâit just seemed like this branch sucked us into it.”

Sarah looked around, saw the pale faces, and knew that her own was no better. Everybody's nerves seemed a little shaky. “Let's fix something to eat,” she said. “Then we can talk about what we are going to do.”

That idea sounded good to the others, and soon they were busy preparing a meal.

“Someone had planned for us,” Reb said as he pulled food and firewood out of the boat. “I don't know what kind of grub this is, but I'll be glad to have it.”

As the others prepared the food, Josh went up and down the beach. He came back just when the meal was ready. “Well, we might as well eat, because we're sure not going but one way.”

They sat down and ate the meat, which was delicious, and afterwards Wash asked, “Well, what are we going to do now?”

The Scarlet Wench by Marni Graff
Las niñas perdidas by Cristina Fallarás
First Strike by Jack Higgins
Acorna’s Search by Anne McCaffrey
Stare Me Down (Stare Down) by Murphy, Riley
Love Is Blind by Kimaya Mathew
Very Much Alive by Dana Marie Bell
The Plot To Seize The White House by Jules Archer
The Preacher's Son #1: Unbound by Jasinda Wilder
Umami by Laia Jufresa