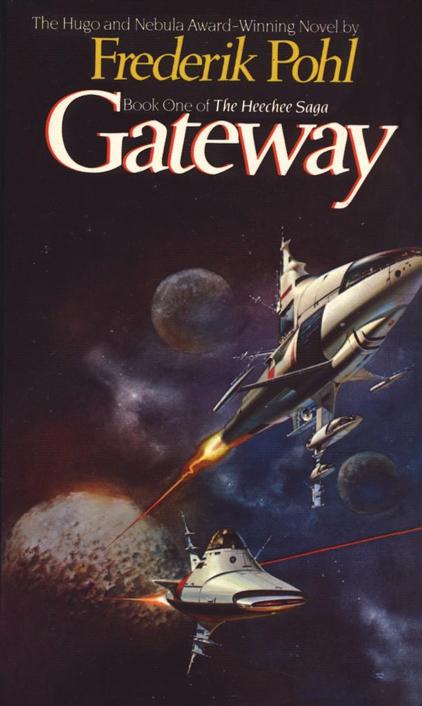 My name is Robinette Broadhead, in spite of which I am male. My analyst (whom I call Sigfrid von Shrink, although that isn't his name; he hasn't got a name, being a machine) has a lot of electronic fun with this fact: "Why do you care if some people think it's a girl's name, Rob?" "I don't." "Then why do you keep bringing it up?" He annoys me when he keeps bringing up what I keep bringing up. I look at the ceiling with its hanging mobiles and pinatas, then I look out the window. It isn't really a window. It's a moving holopic of surf coming in on Kaena Point; Sigfrid's programming is pretty eclectic. After a while I say, "I can't help what my parents called me. I tried spelling it R-O-B-I-N-E-T, but then everybody pronounces it wrong." "You could change it to something else, you know." "If I changed it," I say, and I am sure I am right in this, "you would just tell me I was going to obsessive lengths to defend my inner dichotomies." "What I would tell you," Sigfrid says, in his heavy mechanical attempt at humor, "is that, please, you shouldn't use technical psychoanalytic terms. I'd appreciate it if you would just say what you feel." "What I feel," I say, for the thousandth time, "is happy. I got no problems. Why wouldn't I feel happy?" We play these word games a lot, and I don't like them. I think there's something wrong with his program. He says, "You tell me, Robbie. Why don't you feel happy?" I don't say anything to that. He persists. "I think you're worried." "Shit, Sigfrid," I say, feeling a little disgust, "you always say that. I'm not worried about anything." He tries wheedling. "There's nothing wrong with saying how you feel." I look out the window again, angry because I can feel myself trembling and I don't know why. "You're a pain in the ass, Sigfrid, you know that?" He says something or other, but I am not listening. I am wondering why I waste my time coming here. If there was anybody ever who had every reason to be happy, I have to be him. I'm rich. I'm pretty good-looking. I am not too old, and anyway, I have Full Medical so I can be just about any age I want to be for the next fifty years or so. I live in New York City under the Big Bubble, where you can't afford to live unless you're really well fixed, and maybe some kind of celebrity besides. I have a summer apartment that overlooks the Tappan Sea and the Palisades Dam. And the girls go crazy over my three Out bangles. You don't see too many prospectors anywhere on Earth, not even in New York. They're all wild to have me tell them what it's really like out around the Orion Nebula or the Lesser Magellanic Cloud. (I've never been to either place, of course. The one really interesting place I've been to I don't like to talk about.) "Or," says Sigirid, having waited the appropriate number of microseconds for a response to whatever it was he said last, "if you really are happy, why do you come here for help?" I hate it when he asks me the same questions I ask myself. I don't answer. I squirm around until I get comfortable again on the plastic foam mat, because I can tell that it's going to be a long, lousy session. If I knew why I needed help, why would I need help?

Shit, Sigfrid, you always say that. I'm not worried about anything.

All my life I wanted to be a prospector, as far back as I can remember. I couldn't have been more than six when my father and mother took me to a fair in Cheyenne. Hot dogs and popped soya, colored-paper hydrogen balloons, a circus with dogs and horses, wheels of fortune, games, rides. And there was a pressure tent with opaque sides, a dollar to get in, and inside somebody had arranged a display of imports from the Heechee tunnels on Venus. Prayer fans and fire pearls, real Heechee-metal mirrors that you could buy for twenty-five dollars apiece. Pa said they weren't real, but to me they were real. We couldn't afford twenty-five dollars apiece, though. And when you came right down to it, I didn't really need a mirror. Freckled face, buck teeth, hair I brushed straight back and tied. They had just found Gateway. I heard my father talking about it going home that night in the airbus, when I guess they thought I was asleep, and the wistful hunger in his voice kept me awake. If it hadn't been for my mother and me he might have found a way to go. But he never got the chance. He was dead a year later. All I inherited from him was his job, as soon as I was big enough to hold it.

Direct from the Lost Tunnels of Venus! Rare Religious Objects Priceless Gems Once Worn by the Secret Race Astounding Scientific Discoveries EVERY ITEM GUARANTEED AUTHENTIC! Special Discount for Scientific Parties and Students THESE FANTASTIC OBJECTS ARE OLDER THAN HUMANITY!

I don't know if you've ever worked in the food mines, but you've probably heard about them. There isn't any great joy there. I started, half-time and half-pay, at twelve. By the time I was sixteen I had my father's rating: charge driller -- good pay, hard work. But what can you do with the pay? It isn't enough for Full Medical. It isn't enough even to get you out of the mines, only enough to be a sort of local success story. You work six hours on and ten hours off. Eight hours' sleep and you're on again, with your clothes stinking of shale all the time. You can't smoke, except in sealed rooms. The oil fog settles everywhere. The girls are as smelly and slick and frazzled as you are. So we all did the same things, we worked and chased each other's women and played the lottery. And we drank a lot, the cheap, powerful liquor that was made not ten miles away. Sometimes it was labeled Scotch and sometimes vodka or bourbon, but it all came off the same slime-still columns. I was no different from any of the others . . . except that, one time, I won the lottery. And that was my ticket out. Before that happened I just lived. My mother was a miner, too. After my father was killed in the shaft fire she brought me up, with the help of the company creche. We got along all right until I had my psychotic episode. I was twenty-six at the time. I had some trouble with my girl, and then for a while I just couldn't get out of bed in the morning. So they put me away. I was out of circulation for most of a year, and when they let me out of the shrink tank my mother had died. Face it: that was my fault. I don't mean I planned it, I mean she would have lived if she hadn't had me to worry about. There wasn't enough money to pay the medical expenses for both of us. I needed psychotherapy. She needed a new lung. She didn't get it, so she died. I hated living on in the same apartment after she was dead, but it was either that or go into bachelor quarters. I didn't like the idea of living in such close proximity to a lot of men. Of course I could have gotten married. I didn't -- Sylvia, the girl I'd had the trouble with, was long gone by that time -- but it wasn't because I had anything against the idea of marriage. Maybe you might think I did, considering my psychiatric history, and also considering that I'd lived with my mother as long as she was alive. But it isn't true. I liked girls very much. I would have been very happy to marry one and raise a child. But not in the mines. I didn't want to leave a son of mine the way my father had left me.

Revo's Property by Angelique Voisen
A Heart Full of Lies by Nique Luarks
The Time in Between by David Bergen
Miss Julia Renews Her Vows by Ross, Ann B.
Game of Patience by Alleyn, Susanne
Last Summer at Mars Hill by Elizabeth Hand
What a Wolf Wants (Black Hills Wolves Book 2) by Long, Heather
The Apartment by Danielle Steel
Healer's Touch by Howell, Deb E
The Disappearance of Katie Wren by Cross,Amy