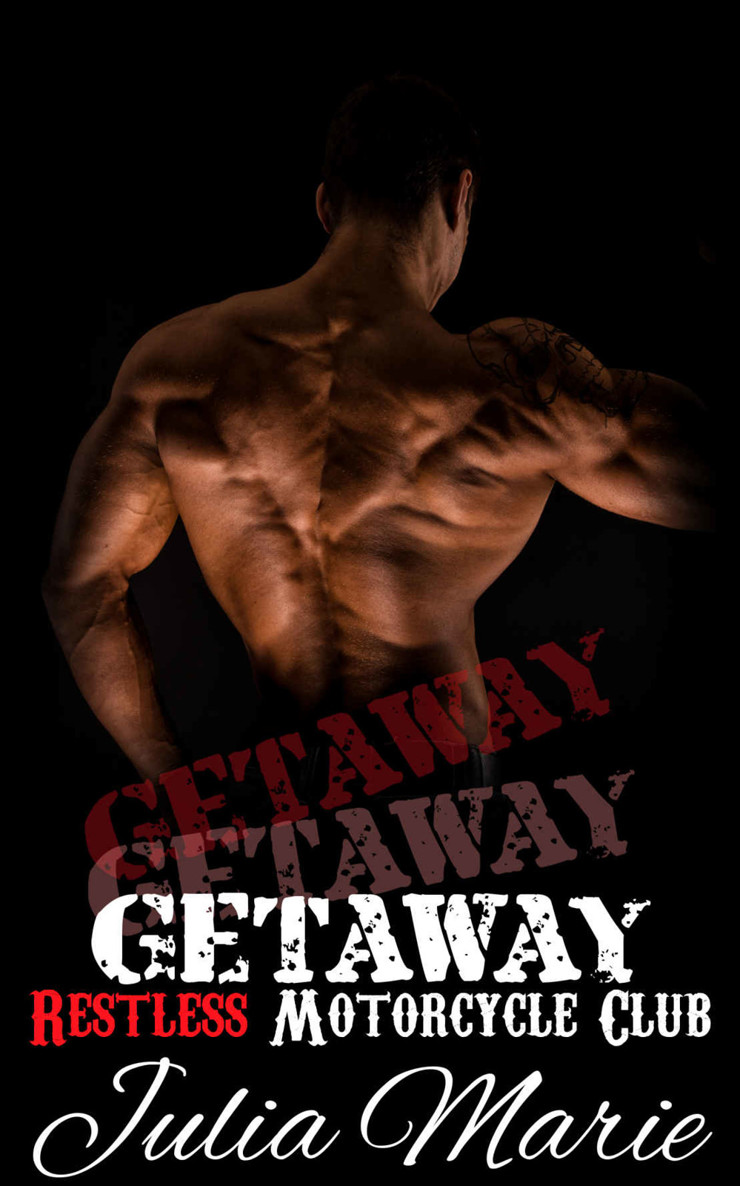 This book is a work of fiction and any resemblance to real persons, living or dead, is unintended.

This work of fiction is intended for mature audiences only. All sexually active characters depicted are 18 years of age or older. Contains sexual situations and explicit language.

Sign up for my newsletter and receive release day notices here, as well as invitations to receive advance review copies!

Jackie Maguire had fallen into lust with the muscular and tattooed Shane Hamilton, and maybe even a little deeper than lust – how could she not? But when she finds the papers proving exactly how dangerous her biker boss is, she flees in a panic.

There is more to Shane than meets the eye, and he knows that there are many people who are after him and the Restless Motorcycle Club. Jackie is in more danger than she knows, and she is running away from the only man who can protect her.

He looked into my eyes, as if to be sure. Whatever he saw there, it must have been good enough for him. His hand rose to my head and sank into my hair. He pulled my head back gently and took my mouth, his lips almost bruising on mine with their intensity.

“I thought I was going to lose you there,” he said when next we parted. “That would have been unacceptable.”

I wrapped my hands around his shoulders to steady myself, light-headed from the kiss. “Unacceptable?”

“Yes. Because you are mine.”

The ancient Corolla shuddered around me as I pushed it faster than it was comfortable going. The old stalwart was not used to this type of behavior – ordinarily I wasn’t willing to try and push it much above fifty miles an hour, but I drove like the devil was chasing me.

And maybe he is. Oh god.

The man who I had thought I was getting to know – who was considerate and passionate as much as he was dominant and commanding – very well might actually be a criminal mastermind. I looked down at the files that sat on the passenger seat before looking away quickly, as though even just touching them with my eyes was going to cause brimstone to rain down from the sky.

All those men… killed?

There were articles – many of them – attached to the list of men’s names and the instructions that had accompanied it.
I need your help in dealing with a problem.
There is a list of men attached to this message, as well as payment. I need you to take these men, and make sure that they are never heard from again. I’m sure you will handle this with your usual speed, skill and discretion.

I had absolutely zero experience in this kind of thing beyond what Hollywood had shown me through the years, but there was no other explanation for what I had found. The photocopied note was in Shane’ handwriting, of that I was certain.

A yellow light interrupted my train of thought, and although I was far enough from the intersection to stop in time, with a fearful look backwards I pushed the accelerator to the floor and burst through. A blue Honda that was about to turn into the lane ahead of me screeched to a halt before we collided.

I veered out of the way to avoid a collision, time slowing as my right fender just barely edged around the Honda’s protruding bumper. Despite going far faster than I had any right to, I saw the wide open eyes of the older man driving the other car, an expression that was surely mirrored on my own face.

Then time sped back up, and the Honda was rapidly receding from my rear view. My reward was a long series of honks from the driver.
I guess I earned those.

Heart pounding, I slowed down to the speed limit.
Running away from Shane won’t do me any good if I just go and kill myself.

I hadn’t even stopped to think of a plan; I was operating entirely on instincts and reactions. Was it even safe to go home? Surely Shane knew – or could find out – where I lived. If he truly was a threat, then going home wouldn’t stop him. Not if he could callously order the deaths of men all around the country.

There wasn’t really any other place I could go – I barely had any friends worthy of the label, and my parents lived halfway across the country. As for checking into a hotel or motel to try and lay low, the thought alone nearly made me laugh. My wallet was so light that it could practically float away.

There is one more option.

I could turn to the same people who had put me into this position in the first place. If it wasn’t for their blackmail and threats, I wouldn’t have gone snooping for information on Shane Hamilton and found more than I could handle. It was the least they could do to take care of me now that I’d found what they were looking for.

The carefully folded piece of paper was still in my wallet where I had stuck it after that unfortunate lunch in the cafe –
Jesus, was that only yesterday?
After months of not having a job and each day blending seamlessly into the next in one big useless blur, the thought that so much could happen in two days was outrageous.

In careful, precise handwriting, the note simply said:
When you think you find something useful, call 916-555-0182.

It picked up on the first ring.

“Ah, Miss Maguire, I was expecting your call.” The smooth voice was familiar – the man in the cafe from the day before.

His quick response caught me off guard.

“Yes, of course. The way you drove away from the warehouse made it quite obvious that you had found something worthwhile.”

The words took a while to sink in. “The way I
what
? How do you know about that? I only just left!”

“I told you, Miss Maguire, our business is information. And now it appears that you may have something new that we did not have access to before. I would like you to come in and bring whatever you’ve found with you. I’ll message you the address.”

The line went dead, and immediately afterward my phone beeped to indicate a new text message.