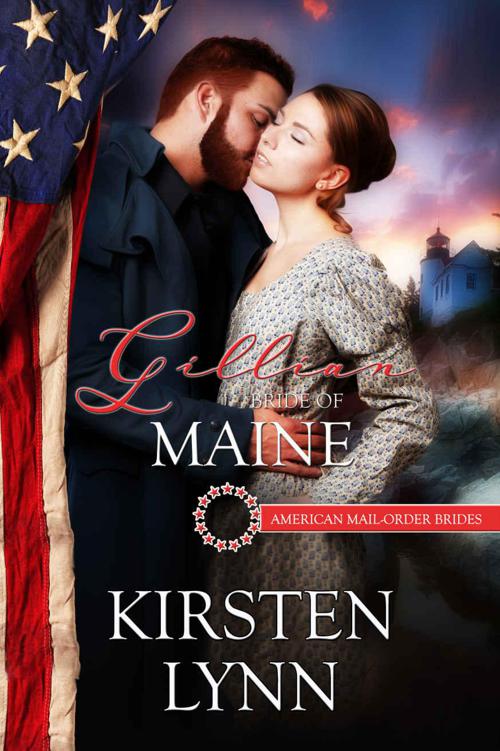 Gillian Darrow fled her father’s house in Maine before he could put his evil plans into action. Now the actions of another unscrupulous man have left her without employment and few prospects. Following in the footsteps of other women from the factory, Gillian decides to become a mail-order bride. The advertisement from a lighthouse keeper in Maine catches her eye, and Rhys Chermont’s letters catch her heart. She hopes the lighthouse keeper can guide her home.

There’s only one problem…

Rhys Chermont never posted an advertisement for a wife and never wrote any letters to Gillian Darrow.

The last thing Rhys Chermont wants is another wife. While life at Bass Harbor Head Lighthouse keeps Rhys busy, he has to admit it would be nice to have a helpmate. The solitary life of a lighthouse keeper drove his first wife into the arms of a wealthy shipbuilder and led to a scandalous divorce. Luckily for Rhys, other forces are at play during the Christmas of 1890, and in Gillian, he just might find the light that leads him home.

ALL RIGHTS RESERVED: The unauthorized reproduction or distribution of this copyrighted work is illegal. Criminal copyright infringement is investigated by the FBI and is punishable by up to 5 years in federal prison and a fine of $250,000.

All characters and events in this book are fictitious. Any resemblance to actual persons living or dead is strictly coincidental. No part of this book may be reproduced, scanned, or distributed in any print or electronic form without permission.

To the trip to Maine I took years ago and the long-suffering friend who visited every lighthouse we possibly could with me, even during a hurricane. From lighthouses to lobster and everything in-between, the memories never fade and a piece of my heart was lost Downeast.

T
he tail of
the “n” at the end of her name shot to the edge of the paper. Gillian grimaced at the sloppy letter. She glanced over the page to confirm her friend Willow would be able to make sense of the chicken scratch.

As I write this note to you, I am on a train bound for Maine to marry Mr. Rhys Chermont this very night. He is the gentleman to whom I have been writing from his advertisement in the
Grooms’ Gazette
. My heart is filled with great hope, and at the same time, my stomach turns in terror. I pray Mr. Chermont is as kind as your Amos turned out to be, and we will experience the same happiness you have found. I know I have sworn a million times I would never return to Maine, but it is where my heart is leading. And Mr. Chermont is a lighthouse keeper, so surely he can guide my path to good a life.

I left Rose and Emma well. Neither is certain of their path yet, but I hope the New Year will guide them to fulfilled and happy lives. Life at the Brown Textile Mill was harsh, and I cannot say I’m saddened by Mr. Brown’s loss, but I would not give up those years when I met and befriended three of the most caring and wonderful women on earth. I am also thankful you can put all doubts about starting the fire behind you and move on in your life with Amos.

My most sincere wishes for a very Merry Christmas. My best to you and Amos.

Though her friend’s happiness had come after a period of trials and misunderstandings, Gillian wished for the same joy for her and Rhys. Trials could be overcome; she knew that lesson well. If he was a man with a good heart and upstanding morals, she could accept anything else about him.

Folding the letter, Gillian placed it in the addressed envelope and stuck it into her bag. She pulled another envelope from the bag and held it between her hands as her gaze turned to the blowing snow outside the train window.

The Boston & Maine chugged relentlessly through the cold and snow to Portland, Maine. She shook her head. Who would have ever thought she’d return to Maine? When she fled three years ago, she took one last look at her home promising never to return. The money she’d taken only brought her as far as Lawrence, Massachusetts, and to the factory where she’d worked with hundreds of other women. Some had secrets deeper than her own and some had no choice but to work to keep their families fed and clothed. Gillian had formed many strong friendships with the women of the factory until the day of the fire in September.

The fire set in motion another turbulent period in Gillian’s life. Again, she was tossed into an ocean of uncertainty, but this time, she was not alone. She joined with Willow, Rose, and Emma, and they encouraged each other. When Gillian saw an advertisement from a lighthouse keeper in Maine, her heart beat like a drummer leading returning soldiers through the town. The village was far enough from Bath that her father would never know of her return, and lighthouse keepers tended to be solitary individuals. She would keep to herself and build a life with Rhys Chermont. Maybe she would find a safe harbor at last.

She turned her gaze to the letter between her hands. Rhys Chermont, what a strong, lovely name. He described himself as tall, broad, and with red hair and blue eyes. She hugged the letter. They’d only exchanged three letters before he sent her a train ticket asking her to come and be his Christmas bride. Home for Christmas, she couldn’t refuse.

Her mind drifted for a second to Emma and Rose celebrating Christmas together in the small apartment she’d shared with them after the fire. Neither had looked through the
Grooms’ Gazette
with her and Willow since they’d both determined not to marry. She hoped the holidays would bring some joy to them both.

It had been hard parting from them at the train station that morning. The cousins were both reserved ladies, and their hugs were light even as she squeezed them tightly. Neither woman cried, so Gillian held her tears until she was on the train. Both were wonderful women and friends despite the walls they’d built around their hearts.

She opened the letter she held.

I look forward to making you my wife by Christmas with prayers this will be the first of many happy Christmases together
.
I will ever strive to make you proud you chose to call me husband.

Her body warmed.
…making you my wife
. Did he mean saying the vows, or taking her to bed? She wasn’t sure what she would say or do if he meant to bed her this night. By the law, he’d have every right. For her, she’d like to know him for more than a few hours before they joined their bodies. Her hand fisted despite the crinkling of her letter. She breathed deep against the panic. What if his letters lied, and he was a man accustomed to using his fists and the fact he was male as weapons against a wife?

Gillian’s gaze snapped to the lady on the hard bench across from her. A young boy sprawled across the bench, using his mother’s lap as a pillow. So many things hadn’t crossed Gillian’s mind when she answered the advertisement. This man might be a brilliant liar, painting a picture of a kind and loving husband when, in truth, he was a tyrant. Her father had taught her the lesson that who a man was outside the house and who he was inside the house could be as different as summer and winter in Maine. She glanced at the young boy with a mop of gold hair covering his round cheeks as he curled closer to his mother’s warmth. And children? Would Rhys welcome children or want to keep his house silent?

Shoving the letter back into the envelope and then into her bag, she smiled at the lady. “Yes. And you?”

“Not long left on your journey then.”

“No, just minutes. Is Portland your destination?”

“No, I continue on to Bass Harbor.”

“No, my fiancé will meet me, and we’ll travel by boat.”

A shiver shook the woman’s shoulders. “Not a night for a boat cruise.”

Gillian forced her forehead not to furrow and kept her smile in place. “Well, we’re to be married this night, so it will be worth a chill.” She hoped.

The train slowed with the screech of iron on iron, and the beast gradually came to a halt. Gillian’s heart picked up the pace where the train stopped.

The lady roused the sleeping boy and offered one last smile. “Safe journey and congratulations on your marriage.”

It was time. She had a moment of doubt when everything screamed for her to find accommodations for the night and return to Massachusetts in the morning. Her heart and the words in Rhys Chermont’s letters pushed her to her feet and down the aisle to meet her husband.

Darn her heart, it was much stronger than she was.