Read Gitchie Girl: The Survivor's Inside Story of the Mass Murders that Shocked the Heartland Online

Gitchie Girl: The Survivor's Inside Story of the Mass Murders that Shocked the Heartland 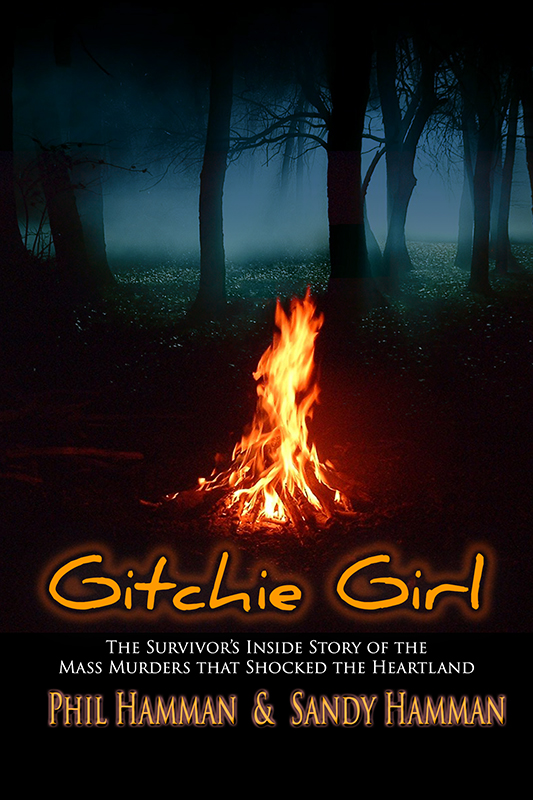 Gitchie Girl: The Survivor’s Inside Story of the Mass Murders that Shocked the Heartland

To Roger, Mike, Stew, Dana, and their families.

God’s peace be with you.

First and foremost, a special thank-you to Sandra for having the courage to share this story.

We also owe a debt of gratitude to: everyone at eLectio Publishing, as their tireless work has been exemplary; Amy Schmidt, Sioux City East High English teacher for her editing; Jodie Hoogendoorn, editor at the
Lyon County Reporter
for digging through archived newspaper photos; the staff at the Lyon County Clerk of Courts for allowing us access to boxes full of legal documents; Sheriff Stewart Vanderstoop, Tom Vinson, son of former Sheriff Craig Vinson, and former Deputy LeRoy Griesse, who all gave valuable insight not only into the crime but also into the personalities of individuals we portray; LeLand Baade for contributing memories about his brothers, Stew and Dana, and their parents; and also Lynette Hadrath Dahl for providing details about her brother, Mike.

Additionally, several people helped to create dialogue as it would have been when exact conversations could not be recalled. Our sincere thanks to the family members of the boys, as many memories were painful to relive. Some family members shared but wished to remain anonymous. Through this story we aimed to portray the heinousness of the crimes while at the same time honoring the memory of four admirable boys.

It has long been a dream of mine to tell the inside story of that night at Gitchie Manitou, but for years this desire was overshadowed by the emotional trauma that resulted in forty years of silence on my part. I can now rejoice that the truth has been recorded and any misinformation from the past can be laid to rest so my family, especially the grandchildren, and my friends can understand the full impact of that tragic night. I thank Phil and Sandy Hamman for making this dream a reality. Thank you to Mary Roche, a victim’s advocate who worked tirelessly for a year and a half arranging the prison visit at Fort Madison, where the staff, especially Warden Nick Ludwick, graciously allowed me the opportunity to help heal an old wound. I left your facility feeling like a different person. My gratitude to Kevin Kunkel for filming the event. Mary Maddox, my rock at Fort Madison, and Debbie Fogelman, my two real-life angels whose friendship and support has endured even through agony and heartbreak. My life is better for the many friends and family who gave their support over the years, including my mom for always loving me and being there for me, my caring husband since 1986 who is the most selfless person I know, my niece Chelsea for always sticking up for me, my Lakota cousin for his patient teaching of the Native ways, all my family including the Cheskeys and Rousseaus. You are all very important to me.

“Everyone who does evil hates the light, and will not come into the light for fear his deeds will be exposed.”

Had it been a movie, dark notes from a lone violin would have begun playing as soon as the man glanced away from the road to watch his wife, who was applying her frosted lipstick while gazing into the visor mirror. The eerie tempo would have intensified when he shimmied the wheel to test its stability while cruising down a county road breathing in the smell of new leather, first turning the air and then the heat on and off. Both worked, everything felt just right, and they were almost sure they’d buy this car. He checked his watch to see if there was still time to continue the test drive through Gitchie Manitou for one last look at the fall colors before returning this perfect ride.

Gitchie Manitou State Preserve in Lyon County is located in the most extreme northwest corner of Iowa, just a few miles southeast of Sioux Falls, South Dakota. He turned off at the entrance to the ninety-one-acre preserve, and the whir of new wheels on blacktop switched to the familiar sound of crunching gravel. Here the dramatic music would have grown more suspenseful. A rabbit darted across the road, and off to the right a whitetail deer stood in waist-high yellow prairie grass warily watching the car. He hadn’t driven but fifty yards further when something up ahead alongside the road caught his attention.

“What’s that?” He turned to his wife. They knew this area well, and whatever was up there was definitely out of place among the rustic landscape. The man eased the car to a stop, stepped out leaving the door hanging open, called to his wife to stay in the car, and walked curiously toward the strange objects in the grass, thinking it couldn’t possibly be what he thought it was. In this split second, the perfect morning deteriorated into one of the most horrific days of his life.

This can’t be happening. It’s not real.
How could this be?
Each explanation was as preposterous as the one before. The music would have reached its climax. Sprawled on the ground before him were three human figures, the arms and legs stiff and still and contorted into grotesque shapes. The bodies bore witness to what had obviously been a gory and unforgiving crime. The gaping wounds that riddled their bodies oozed dried streaks of glutinous blood. Tissue and blood splatters sprayed the dying brown grasses that cushioned the lifeless shapes. For a moment, the man glanced at the open eyes of the corpses who lay before him. Their fixed stares pleaded for someone to reveal the truth behind what caused their gruesome ending. The man raced back to the car and sped to the nearest phone.

Craig Vinson, a no-nonsense lawman with a serious disposition, worked long hours as the Lyon County Sheriff in this sparsely populated corner of Iowa. Anyone who thought the life of a rural sheriff involved handing out speeding tickets and having coffee at the local diner had no idea about the domestic abuse and physical trauma he witnessed on a regular basis. The worst calls were highway fatalities, the senseless carnage reminding him of life’s fragility. Now, after a demanding week that included an elusive theft ring that had escaped apprehension, he was looking forward to this day off, which he intended to spend in front of the television watching his favorite team, the Chicago Bears, even though he wasn’t entirely confident they could pull one off against the Detroit Lions. The interruption of a phone ringing came as no surprise, having a large social circle in the small town of Rock Rapids, Iowa.

However, this phone call was not a social one. Chuckling, he hung up the phone and asked his wife, “Can you believe it? Someone called in a report about three dead bodies over in Gitchie Manitou. Might be those darn rookies over in the next county getting back at me with one of their pranks!” Several regional sheriffs and police officers in the surrounding counties had a good rapport with each other which led to frequent incidents of good-natured antics that sometimes crossed the line of good taste. Vinson hoped to be back by the time the football game started. His attention to duty prevailed and within minutes he was headed toward the state preserve. Could be some teenagers up to their horseplay. He envisioned pulling up to the park to find three people passed out after a night of drinking or some straw scarecrows covered in fake blood set out by kids with nothing better to do than try to frighten innocent park-goers. Vinson was a natural at detective work, and he was already mulling over all the possible outcomes for this situation in his head. “And for this I’m working on my one day off,” he muttered to himself.

Vinson pulled into Gitchie Manitou while surveying the surroundings and managing to stay centered on the one-lane road, which consisted of two narrow gravel grooves for the tires and a grass center in between. Not far from the entrance he pulled up by three still figures lying in a field of brownish-golden grasses. Vinson immediately realized this was much worse than any prank thought up by some reckless teenagers. He removed his hat, shook his head, then took a deep breath before letting out a sigh; all thoughts of the Chicago Bears vanished. He mumbled some words of disbelief, then, careful not to disturb the crime scene, squatted down near one of the bodies. He collected his thoughts and switched seamlessly into detective mode.

Before the hour had passed, crime scene tape criss-crossed the park entrance, and his one deputy, LeRoy Griesse, was preparing to search for clues. Competent as well as genial, Griesse was a boon to the sheriff’s department. While the business of constantly dealing with criminals can cause some in law enforcement to become hard-nosed or calloused, Griesse had managed to retain his warmth and compassion along with a sense of justice. He enjoyed meeting the people of Lyon County and was known to greet any familiar face with a hearty, “How have you been?” When duty called, though, he just as easily shifted into the role of diligent detective.