Read Give the Devil His Due (The Sanheim Chronicles, Book Three) Online

Give the Devil His Due (The Sanheim Chronicles, Book Three) 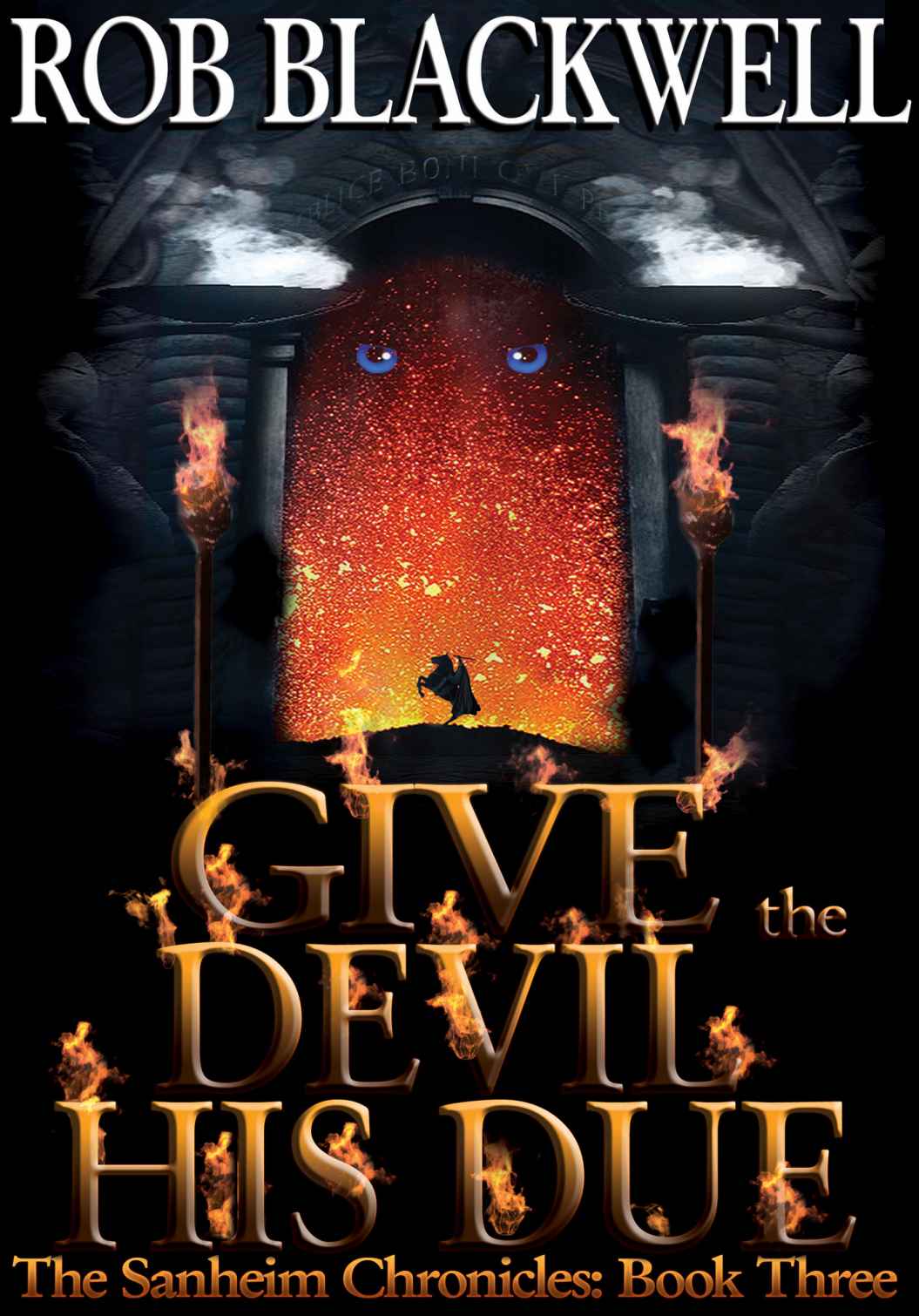 Give the Devil His Due

This work is entirely fictional. Any similarity between characters and persons, living or dead, is purely coincidental and pretty much all in your head. While Leesburg and Loudoun County, Va., are real places, I have taken liberties with the geography. The spelling of “Sanheim” is an alternate spelling of the traditional Irish word for Halloween: “Samhain.” It is not a typo or misspelling.

For Finn and Pippin, who always like a good ghost story

However, he did admit to a certain satisfaction in the death of Quinn O’Brion. He had nothing against the reporter personally. Indeed, he found him pleasant and endearing in a completely naive way. He wasn’t even his first choice to die on Halloween; that had been Kate.

Still, Quinn was a threat. Just an emerging one, but a threat nonetheless. So when Sanheim stared out at the deep, black ocean before him, he smiled at the memory of Quinn falling over and beginning to bleed. Sanheim knew how to deal with threats and had done so with his characteristic, ruthless efficiency. There was seldom a better feeling than watching a plan come to fruition. It hadn’t been exactly how he saw the situation playing out, but it was sufficient. He could cross this particular concern off his list of worries — which had grown long in the past half century — and begin to focus on other matters.

Sanheim was feeling so pleased that he decided to be polite to the man approaching him. He knew in advance that the conversation would be both vexing and pointless, yet he resolved not to let it ruffle him. This was a time to be magnanimous.

“My lord, I’m sorry to disturb you,” the man said.

Sanheim did not turn around, but continued to look out across the cliffs and the roaring surf below. It was his favorite view in the world that he had created.

“Rippon, how wonderful to see you,” Sanheim replied, keeping his tone even.

“I doubt that, my lord, but it is kind of you to say so,” the man replied. “I come on urgent business.”

“Why else would you be here?” he asked.

“The council has taken a vote,” Rippon replied. “They declared you in violation of the treaty and have begun preparations.”

Sanheim rounded on the man in an instant, crossing the few feet that separated them. His eyes were aflame with rage as his right hand grasped Rippon’s throat, his plan to stay calm already abandoned.

“How dare they?” he said, his good mood evaporated. “I’ve broken no rules, crossed no lines. They have no cause.”

His fingers dug into Rippon’s flesh and Sanheim could see he was causing the man pain. Rippon looked soft, his portly appearance always reminding him of a slightly lazy butler. He even dressed that way, always wearing dark pants and a white shirt. Yet he would say this for the man — he bore the pain remarkably well. His pale face showed no outward sign of distress. He did not grimace, shout or react in any way, despite the fact that Sanheim’s fingers were drawing blood. But Sanheim could see the pain in Rippon’s shrunken eyes.

“You violated the rules of succession,” Rippon spoke with some difficulty.

“The challenger, Sawyer, was killed before he could begin the challenge,” Sanheim replied. “He was killed by the next Prince of Sanheim. This has been the way for thousands of years. How have I violated the treaty?”

Sanheim bore in harder and was tempted to reach up with his other hand and snap the man’s neck. It wouldn’t help. Once Rippon was gone, there would be another. It would, however, make him feel better.

Rippon could undoubtedly see the murder in Sanheim’s eyes, likely knew his life was hanging in the balance. But he was clearly no coward and refused to shrink away.

“They have no problem with the challenger’s death,” Rippon said. “But they are aware that you interfered — providing a weapon and a shield.”

“Just the shield,” Sanheim replied. “The sword was forged by another.”

“They weren’t referring to the sword, my lord,” Rippon replied. “The knife you gave your agent, Kieran. That was your handiwork, was it not?”

“Does it matter?” Sanheim said. “I fail to see how this is relevant or a violation of our long-standing accord.”

“The knife was used to kill Quinn O’Brion,” the man said. “You are not to interfere in the right of succession. Giving one side a shield is arguably a violation of that accord, but you went far beyond that. You conspired with your puppet to murder the winner while the battle was still engaged.”

“I took no hand in it myself,” Sanheim said. “Kieran acted of his own free will. He chose to murder Quinn. The fact that it suits my purposes is no matter. I took no direct action.”

“You gave him the knife,” Rippon said. “You set the trap, then sprang it. You know the terms of our treaty. You broke them in spirit, if nothing else.”

“Since when does that matter?” Sanheim said, and it came out a sneer.

“It matters to the council,” Rippon replied. “They have declared the agreement null and void.”

“If that’s the case, then I will gladly give them what they want,” Sanheim said. “Of course, I plan to kill you first. I assume you are aware of that.”

“My death would be of no importance to them,” Rippon replied.

“Excellent,” Sanheim said. “I am so pleased to know that.”

He raised his hands and grabbed Rippon on both sides of his face. It would take only a small gesture to snap his neck. Sanheim could see Rippon was afraid, terrified even. Yet he didn’t try to struggle.

“Very well, my lord,” he replied. “But killing me will deny you an alternative arrangement.”

Sanheim smiled at this.

“Then you are free to turn it down,” Rippon said. “We cannot force you to accept.”

Sanheim held the man’s fate in his hands.

“Tell me, then,” he said. “But be aware they may be the last words you speak.”

Rippon swallowed but otherwise gave no reaction to Sanheim’s threat.

“They would be willing to come to an accommodation,” Rippon said. “If you were to make amends for your transgression.”

“And how would I do that?” Sanheim said. “The man in question is dead. Not even I can restore him to life.”

“Of course, my lord,” Rippon said. “We would not ask the impossible.”

“We ask for the test of trials,” Rippon said.

“How would that be possible?” Sanheim said. “I made no claim to him. His soul is free to travel where it deserves to go, wherever that may be.”

“The council has stayed that decision until this matter is decided,” Rippon replied. “Quinn O’Brion has been placed in limbo. If you accede to our request, he will be given to you, but only upon the condition that the trials be fair. If you refuse, we will let his soul free.”

Sanheim made the decision instantly. Even before he spoke the words, he had formulated a plan. But he did not want to seem overeager.

“Why should I agree to this?” Sanheim said. “Perhaps it would be better if this farce were over, the treaty nullified.”

“This peace has lasted a long time,” Rippon said. “Longer than it ought to, by rights. But are you really prepared to let it go? Are you ready to face the consequences? Can you be so certain of victory?”

Sanheim looked into his eyes and saw a mixture of anger, fear and distrust. Perhaps this was a sign of weakness on the council’s part. Maybe it really was time to be free of the accursed agreement that so bound him.

But when given another option, he couldn’t bear to throw it away. The agreement would be broken only when he was ready and that time had not yet come. Once again, he released Rippon from his grasp.

“Very well,” Sanheim said. “If you will deliver Quinn to me, I will give him the test. But I warn you, the outcome is already assured. I do not want the council crying foul when he is destroyed.”

“All we demand is that you take no part,” Rippon said.

For a moment, Sanheim regretted not killing the stout messenger. His hands flexed at his side, anxious to remedy his mistake.

“I do not know what your true plan is,” Sanheim said. “But even if he survives the trial, he cannot overthrow me. The council knows that as well as I.”

On this point, however, Rippon was maddeningly silent.

“Go,” Sanheim said. “Go tell your precious council I will adhere to their request. Our agreement still stands at least for a while longer.”

Rippon did not wait a second more, but turned on his heels and walked away. Sanheim watched him as he moved down the path and out of sight. Slowly, he turned back to face the roaring waves below him.

The wheels of his mind were already in motion, filled with plans within plans. He would leave nothing to chance.

It seemed that Quinn O’Brion was once again a threat. And Sanheim knew exactly how to deal with those.

I feel my life ebbing from me.

It has taken all my strength to come here, to deliver the message he wanted me to. And I must do what he wants now, because soon I will be in his domain, until the seas burn away.

I am Lilith Crowley, wife and consort of Robert Crowley, and the sole surviving witness of his destruction. It breaks my heart to write those words. Robert was so sure, so calm. Since I met him more than a decade ago, he’s never doubted his destiny, his place in the world.

I know that he was scared at times. When he lay next to me at night, sometimes he would awaken suddenly. It was always the same dream, the same monster that haunted him: Sanheim. But he always knew what he would do.