Read Glamour of the God-Touched Online 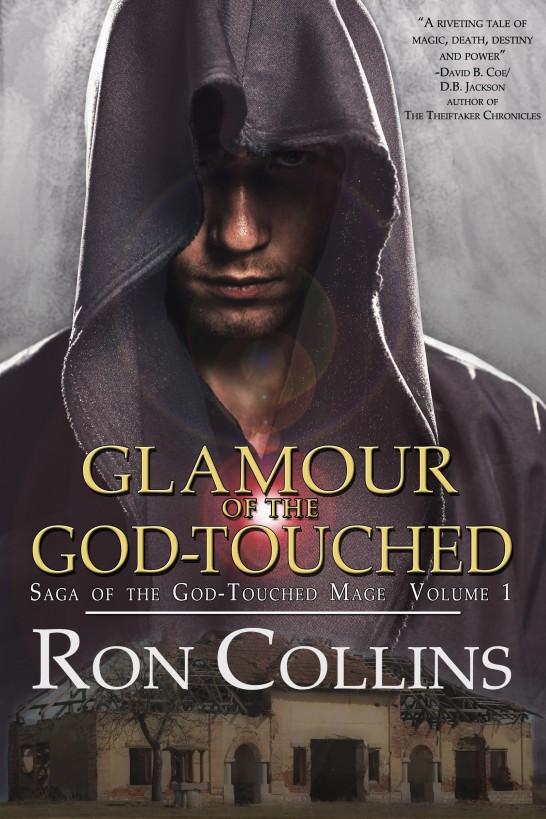 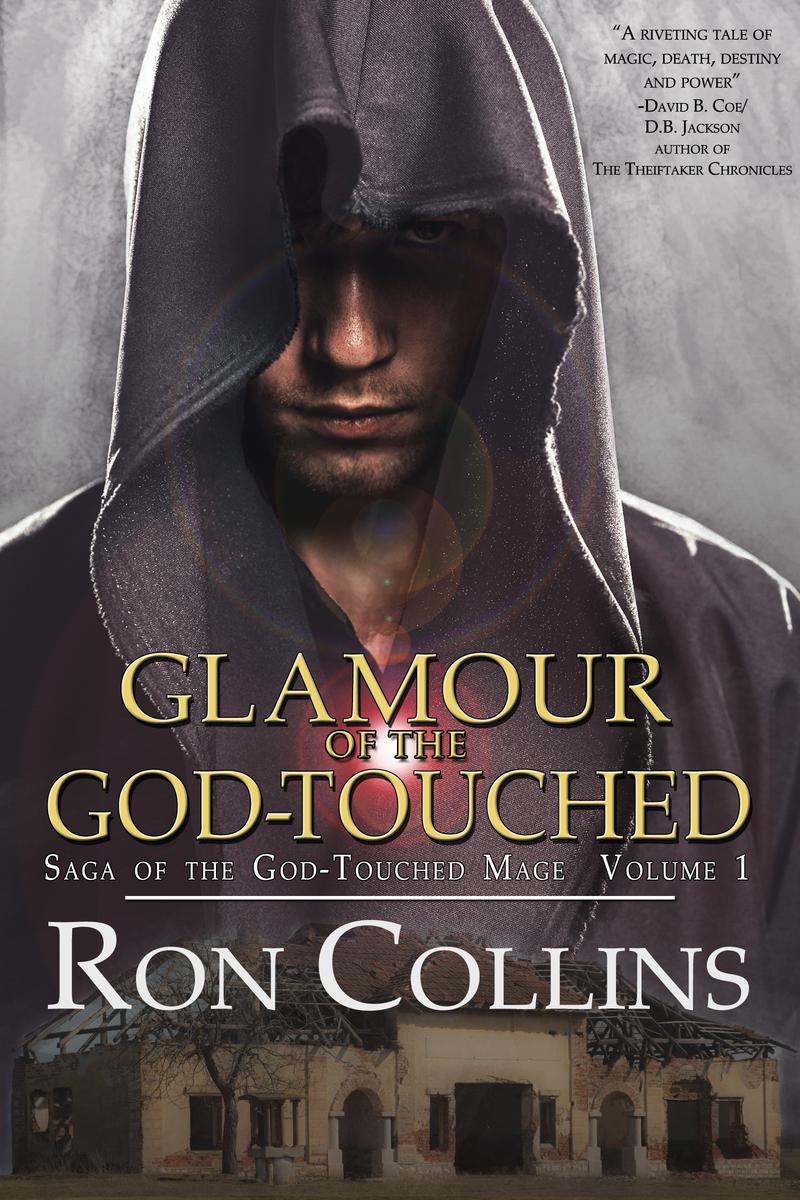 “
A riveting tale of magic and death, of
destiny and the power inherent in the choices we make, Glamour of
the God-Touched is as thought-provoking as it is gripping. Ron
Collins is a wonderful writer and a spellbinding
storyteller.”

David B. Coe/D.B. Jackson, author of the
Thieftaker Chronicles

GLAMOUR OF THE GOD-TOUCHED

Saga of the God-Touched Mage, Volume 1

The Saga of the God-Touched Mage
includes:

Target of the Orders

Gathering of the God-Touched

Pawn of the Planewalker

Changing of the Guard

Lord of the Freeborn

Other work by Ron Collins:

Four Days in May

(Saga of the God-Touched, volume 1)

This book is licensed for your personal
enjoyment only. All rights reserved. This is a work of fiction. All
incidents, dialog, and characters are products of the author’s
imagination. Any resemblance to persons living or dead is purely
coincidental. This book, or parts thereof, may not be reproduced in
any form without permission.

For Tim, Mike, Jackie, and Ken. And of
course, for Lisa.

How You Can
Help

There was so much Garrick did not know about
himself.

He didn’t know where he was born. He didn’t
know everywhere he had lived—though his earliest memories included
a long journey in a rickety wagon. Garrick couldn’t remember if his
mother had always been angry, or if she had just been worn down by
the never ending stream of burdens put upon her by those she worked
so hard to serve.

He remembered sleeping in dirty alleys and
drinking milk cut by rain water. He remembered a blur of boarding
houses, shopkeepers, and manors.

He knew that, when he was perhaps six years
old, his mother had finally given up and sold him to Baron Alzo
Fahid, a jeweler in Dorfort. Fahid was a loud man with wicked
reliance on drink. He beat Garrick whenever his business lost
money, he beat Garrick whenever his mistresses complained about the
grime of their work spaces, he beat Garrick—it seemed—whenever the
wind shifted to the north. But Fahid was also a gambler and, as
gamblers will do, he eventually came to owe a Torean mage named
Alistair compensation. In the time it took the men to nod their
heads, Garrick was consigned to the manor of the mage.

At first Alistair’s home had seemed a dark
and evil place. And he found that Alistair’s form of
discipline—being made of arduous tasks such as scrubbing the floors
or cleaning Alistair’s beakers and flasks to make them ready for
tomorrow’s castings—were longer, harder, and arguably far more
painful than the baron’s simple beatings.

The mage superior proved a patient master,
though, and Garrick grew to appreciate both the solitude and the
structure of a Torean mage’s life. A wizard was intruded upon only
when a client needed to boost harvest, mend an unmendable, or scry
whatever was needed to be known about a lover, an enemy, or even
the occasional ally.

As he grew older, Garrick saw how Alistair
maintained an air of mystery about himself that was thick enough to
ensure the rest of Adruin would leave him alone. Garrick liked
that. He enjoyed that Alistair created anxiety in his clientele—the
idea that he could master something so difficult for others to
comprehend that they would steer clear of him just to avoid dealing
with it. It made him feel unique. It made him feel like he
understood things about the world that the common people walking
the streets could never manage. It helped him forget that only a
few years prior Garrick himself had walked those very streets
without even a pair of shoes to protect him from the dirty
cobblestones below.

He could see himself living a Torean’s
life—fully occupied, yet alone at the edge of the world. So, when
Alistair said he would cast the spell to trigger Garrick’s full
link to the plane of magic, that by summertime he would be a full
mage, he had been excited beyond hope.

It meant he would be his own master, no
longer be tied to anyone else. It meant that as long as he lived,
Garrick would never again be in the service of any other man.

It was mid-afternoon and the crowd was
light.

Garrick leaned against the rough-hewn
counter, using bread to sop broth from his bowl. His scowl and
sharp movements showed his disgust at the Koradictine mage sitting
at a table toward the front.

“The wog needs to be taken down a peg,”
Garrick said.

“Don’t do it,” Arianna whispered. But the
glow of her cheeks and the sparkle in her eyes spoke a different
tale.

She wore an apron tied around her waist. Her
dark hair was tied behind her neck. She was stunning, even in the
dim light of the diner, and even with the thin layer of kitchen
grease that had built across her forehead as it always did later in
the day.

The Ladle was a dive built of split lumber.
It had a central fire pit and windows that were not quite square
but were open to the air to give the place a breeze during the day.
Though Evo had been talking about planking the floor for as long as
Garrick had been coming here, it was still hard-packed dirt.

Garrick had first come to the Ladle because
it was a favorite of Alistair’s, and because he liked the bread.
But Arianna’s arrival changed everything. After seeing her, Garrick
had lobbied Alistair to send him to Dorfort at every turn. Alistair
would grumble and speak gruff sentences, but would then find he
needed something important. Today, for example, he was in town to
retrieve venison and salt, which they would use during their trip
to Caledena next week, and a collection of spices, which Alistair
always needed to augment his sorcery.

Garrick had taken to escorting Arianna home
in the evenings, and last week they had shared a kiss. That kiss
filled his mind constantly. It encompassed his entire sense of
being throughout every minute of every day he had been away from
her.

That kiss was his, and no weak-chinned
Koradictine could take it away.

Garrick’s stomach curdled as the Koradictine
wizard leered at Arianna. His eyes narrowed as the Koradictine
glanced out the window and drank from his mug. The mage seemed
anxious, like he was waiting for someone. It gave the man an air of
arrogance that Garrick nearly choked on.

He felt Arianna’s focus from the other side
of the counter. She was waiting to see what he would do, wondering
if he would rise to her bait. Or, was she perhaps wishing he
would?

“He’s Koradictine,” Garrick finally replied.
“He deserves whatever he gets.”