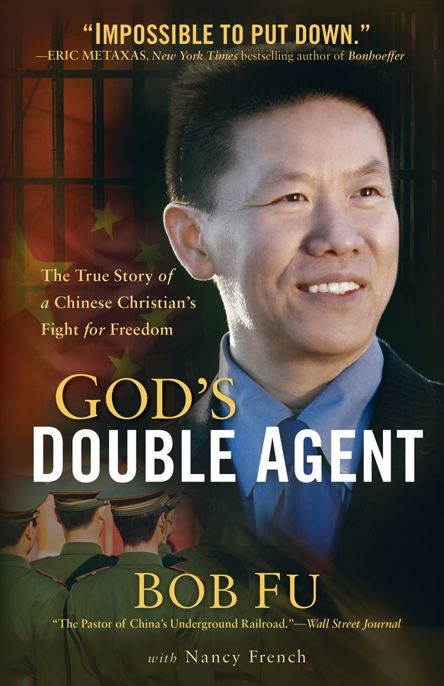 a division of Baker Publishing Group

Unless otherwise indicated, Scripture quotations are from the King James Version of the Bible.

The names and details of the people and situations described in this book have been changed or presented in composite form in order to ensure the privacy of those with whom the author has worked.

“Bob Fu has dedicated his life to bringing freedom of religion to the Chinese people. His story is a testimony to the power of faith and an inspiration to people struggling to break free from oppression.”

“The riveting account of a student leader of the Tiananmen Square protests who becomes a literal prisoner for Christ and then escapes to the West. Impossible to put down.”

“Like John the Baptist, Bob Fu has influenced people from all walks of life, across the nation of China and beyond, and led many to repent and believe in Jesus. Anyone who cares about the persecution of God’s household in China and in the Middle East should read this book.”

“This compelling and deeply moving account of Bob Fu’s escape from China and his heroic work on behalf of other human rights workers there is likely to become a classic. From the very first page, you are hooked. There are few more convincing narratives of Christian courage under persecution and suffering.”

“Courageous, tireless, well-informed, and effective. Bob Fu and ChinaAid are harbingers of the more just and open China that we pray is coming.”

“Bob Fu’s story is a gripping and inspiring account of courage and endurance. His personal experience of China’s struggle for democracy, religious freedom, free speech, and human rights—particularly coercive population control—makes this an indispensable book, especially for anyone who admires China and its people and who yearns for reform and change. I feel privileged to have had a small walk-on part in what is a story of suffering tempered by hope.”

“I will always remember that night in early 1997 when I met Bob and Heidi and baby Daniel at Dulles airport, although I have met many people there over the years. It was easy to identify Bob even as we met for the first time. That irrepressible spirit has become familiar to many, many others over the years since they first arrived in America. Bob and Heidi’s experience in Beijing with persecution for their faith, and the uncertainty of life as exiles in Hong Kong, have given them a powerful sense of commitment to helping others who suffer for their faith and more generally for the freedoms of expression and association. They have persevered through many twists and turns of the road, despite the costs. And throughout, they have sought ways to bring God’s blessings to the Chinese people.”

“
God’s Double Agent
is a moving testament to the liberating power of Christian faith over the empty ideological doctrine of communism. Every freedom-loving person should read this book. Bob has done Christianity and the free world a great service by sharing his story of spiritual and political liberation. May many millions follow in his path.”

“
God’s Double Agent
is a page-turner! The incredible growth of the Christian Church in China has taken place in a culture of official atheism and severe persecution. Bob Fu was on the ground and experienced persecution and suffering. He was at Tiananmen Square. The Chinese military opened fire and killed their own university students. His report on what really happened, and continues to happen, is startling.”

“
God’s Double Agent
is an engaging memoir of Pastor Bob Fu, founder and president of ChinaAid, which serves the persecuted church in China. Pastor Fu’s story takes us from the hardship endured by his parents under harsh communist policies through his own birth into desperate circumstances and the bitterness he felt growing up. He tells how he was delivered from this bitterness through his conversion to Christianity, immediately began evangelizing others (and was dubbed “the Missionary” during graduate school), and eventually escaped to the United States. Written in an intimate and lively style, this account gives insight into the formation of a tireless advocate for the persecuted church in China, as well as a portrait of his bold, brilliant, and intrepid wife, Heidi.”

“This book is truly one of David and Goliath proportions. Bob Fu may physically be a little man, but in reality he is a giant: full of faith, courage, and tenacity. This is the amazing story of Bob’s life spent fighting for freedom and justice both inside and outside of his beloved homeland of China.”

Christianity in China has been confined to the history section of the museum. It is dead and buried.

Rebellion to tyrants is obedience to God.

It was midnight. I placed my fingers on the bottom of the window and gently, quietly tried to pull it open. But years of paint had cemented it shut, so I held my breath and gave it a sharp yank. It opened at last—but not as silently as I’d hoped. I prayed that none of the police officers stationed by my building’s door had decided to take a cigarette walk around the block and that none of my neighbors were awake. If I was going to do this—and survive—there could be no witnesses.

Heidi, my wife, had just left our apartment on the sixth floor, wearing a silk scarf and different clothing than she normally wore. The agents were used to seeing us as a couple, so she’d have a better chance of slipping past them without me. There were three exits to the gigantic building, but the government had shut down two of them when they began watching us. The only remaining exit was next to a room full of security guards who watched our every move. Whenever I left the building, they sent out an alert and another guard would inevitably pick up my trail. I couldn’t remember what it was like to be outside in the open air without surveillance.

If Heidi’s disguise didn’t work, I wouldn’t have much time before the agents would be on their way up to the sixth floor to arrest me—but I wouldn’t be there. Heidi had purposely
left on the light to mislead the spies into thinking we were still awake and milling around before bed, and I was already on the fifth floor, where I had entered the restroom. Everyone on the floor shared the same bath, and the doors to the restrooms were always unlocked. I looked out the window and couldn’t see a thing, but I knew I wasn’t getting the full view. My chances of survival would increase with every floor I could safely descend without being detected. I quietly slipped out of the restroom and back into the stairwell, watching the numbers decrease. Fourth floor. Third floor. Second floor. That’s where I stopped. The agents were on the first floor, and at this point there was no turning back.

I gently opened the door of the stairwell, looked left and right, and slowly walked down the corridor to the bathroom. I entered a tiny toilet stall and climbed on the ledge of the window, which fortunately was already open. Even though it was August in Beijing, the breeze wafting over the sill sent a chill through me. I placed my feet as close to the edge as possible. The jump was close to twenty feet and though I couldn’t see the ground, I knew there was vegetation there to help break my fall. As long as I didn’t die or break any major bones, I’d be all right.

After our experience of prison and house arrest, death wasn’t the worst option, but now Heidi and I had reason to fight for life. She was pregnant. In China, the government’s “one child” policy meant we would be forced to abort our baby because we didn’t have the proper permit. Consequently, we weren’t celebrating with a baby shower, a new nursery, or by telling our parents they were about to become grandparents. In fact, if we were successful they’d probably never see their grandchild—or us. But we had no choice.

When I looked over the ledge, my glasses slipped down my nose and I pushed them back into place. Using my left hand, I held on to the windowsill, feeling woozy from the height. My legs quivered. Would I be able to do this? What would happen
to Heidi and the baby if I died? I took a deep breath, said a prayer, and stepped into the darkness.