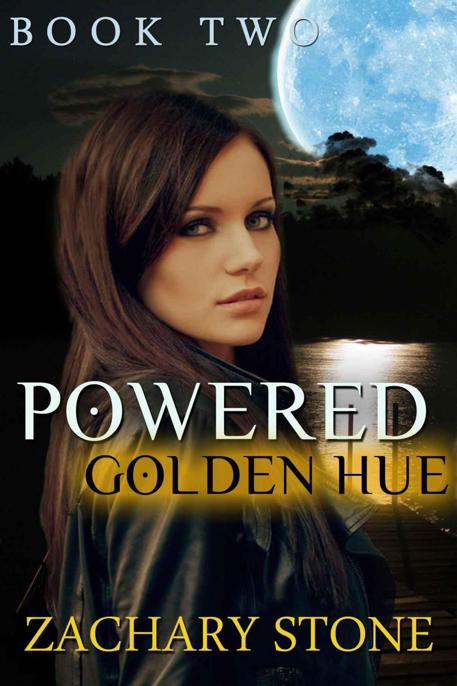 This is a work of fiction. Names, characters and incidents are products of the author’s imagination and should not be construed as being real. Any resemblance to actual events, or people is entirely coincidental.
Other Books By Zachary Stone

I opened my eyes, and I saw that Cathy's black cat, Tabitha was kneading my chest with her petite paws.

“Good morning, kitty,” I said, lifting myself up and looking around the room. It only took moments for me to remember it was Sunday – we’d have to be leaving today.

Gently lifting and placing Tabitha on the floor, I sat up on the sofa. I felt good -- alert and strong. Normally, as a human, I’d have been almost zombie-like for a while after waking up – minus the cannibalism.

I felt my stomach rumble; I was hungry. Realizing that we probably didn’t have a lot of time before Sarah came to pick us up, I walked into the kitchen and quickly decided to cook up some grub. It would be a nice thing to surprise Cathy with breakfast in bed.

It didn't take me look to find where she kept her pots, pans, and utensils. Only a couple of minutes later, I had eggs, bacon, and ham frying on the stove. Although sweets weren’t as appealing to me as they used to be, I decided to make some cinnamon French toast in the oven.

I turned on a television as I cooked and listened to the news. A couple of pundits were discussing the nature of the brief zombie outbreak that had taken place in Savannah – it was now national news. One talking head tried to claim it was a sickening prank done by hoaxers. He compared the outbreak to crop circles in that the zombies probably seemed realistic, but they were totally fake. A second pundit argued that an analysis of the bodies found no mechanical devices attached to them, and that they had to have been moving on their own.

I looked at the clock on the refrigerator door and it read 7:02 AM. Worried that Cathy might awaken before I was finished cooking, I hurried to get done. With a plate of hot, steaming food in my hand – giving off a strong aroma of protein – I zipped to her door.

I listened carefully at the door and with my enhanced hearing and could tell she was still in bed. I didn't want to walk in on her dressing.

I opened the door gently and quietly walked into her room. My bare feet barely made a noise on the beautifully stained hardwood floor. Cathy was resting on her bed curled up under a heavy, light blue comforter. I could tell she wasn’t asleep. The smell of food had probably awakened her.

She turned her head and brushed her long, brown hair out of her face.

My heart sank a little.

She lifted her arms up and motioned for me to come closer. Before I could set down the plate of food, her arms were around my neck and she kissed my cheek.

“So you cooked me breakfast?” she said, letting go of me and reaching for the plate. “That’s so thoughtful of you.”

I sat down on the edge of her bed and watched as she began eagerly on the large serving of scrambled eggs.

“Would you mind getting me something to drink?”

“Just some water would be fine. Bring your food in here, too.”

I quickly made a plate for myself and filled two glasses with ice water. Returning back to her room, I could see she was almost finished eating. I sat down on her bed and began to eat as well.

I was the lucky one. Only a short time ago I was an emotionally burnt out, physically exhausted human working a dead end job. Now out of the blue, I not only was bestowed with unusual powers, but I’d also found my soul mate.

“Finding someone like you makes me luckier than someone who wins the lottery twice in a row. I wouldn't trade you for any woman in the entire world,” I said.

She held out her hand and squeezed my knee; her touch felt magical. I wished I could sit with her for longer but I realized we had a busy day ahead.

She stood up, and I saw that she was wearing pajamas and were covered with the faces of dogs and cats.

“What you looking at?” she said.

“Darn,” Cathy said. “I was hoping you were looking at something else.”

I blushed a little.

I needed to leave her bedroom.

“I'll be in the kitchen,” I said, before quickly walking out.

“Thanks for being such a gentleman,” I heard her call out, before I shut her door.

Walking back into the kitchen I filled another plate with food and scarfed it down. In the fridge I saw a half gallon of milk and before I could think about it, I’d drained the entire contents of the jug. I quickly showered and got dressed .

While Cathy was getting ready I took a few moments to make sure my bags were all ready and then looked for Chester. We’d brought him over the night before, and Lizzie had promised to come over each day and feed him and Tabitha. But now I didn't find him anywhere. Suddenly, it dawned on me that I was being stupid. All I had to do was focus and I could track him down by his heartbeat. I sat down on a recliner, shut my eyes, and began to listen.

I could hear everything in the apartment: Cathy humming in the shower, two old fashioned clocks ticking, the compressor of the refrigerator spinning, and two feline heartbeats. Opening my eyes, I could see that Tabitha was in the room with me. Chester must be in one of the back bedrooms.

Walking down the hallway, I noticed the hundreds of framed photographs on both walls of the corridor of Cathy and her family. Several of the pictures showed Cathy with Albert. Turning my head away from a particularly disgusting photo of them kissing in front of a lake, I rushed to find my cat. Opening the door one of the back bedrooms, I found Chester was sleeping on an office desk. However, he’d been up to his usual tricks – pens, envelopes, paperclips, and magazines were all over the floor.

I picked him up, put him out the room, and started gathering all the items strewn across the white carpet. I lifted up a picture frame lying face down on the floor and saw that it was a wedding photo of Albert and Cathy. She was wearing a beautiful white dress with ornate embroidery, and Albert was standing behind her with his arms wrapped around her waist.

A flood of emotions came over me. I was puzzled at how Cathy could fall for a hothead like Albert, jealous that his arms were around the woman I loved, and more than a little inadequate; the photo reminded me that Cathy's past involved relationships with multiple men. She’d been married to Albert and had certainly been involved with other men, either vampire or human. However, Cathy was my first girlfriend, ever.

Cathy was standing behind me.

“I'm sorry, I wasn't purposely going through your things,” I said. “I was trying to clean up the mess Chester made.”

“Well, pictures of the two of you are all over this apartment,” I said.

“I'm sorry,” she said. “Once we get back from Atlanta I'll take them all down and destroy them.”

“Did you love him?” I asked, still looking at the picture.

“Did you love him?” I repeated.

Cathy sighed. “Yes, for a while I did love him. He was a different person when we first married, but he started to change.”

I put the picture on the desk and turned around so I could see Cathy.

“Why did you divorce him?”

She leaned against the door frame and looked uncomfortable talking about the topic.

“I couldn't take his temper and attitude anymore,” she said. “We started having arguments and he’d leave for days. I found out through a friend that he was messing around with human women he’d meet in bars. After he admitted it to me, we had a big fight. He ended up attacking me, so I divorced him.”

“Look, that part of my life is over,” she said. “He’s dead now, and all I care about is marrying you as soon as I possibly can. I'm looking forward to our life together.”

Before I could respond, the doorbell rang.

Cathy opened the door and vampire mother came in. It still felt a little odd for me to feel for such a good looking youthful woman as my mom, but the feeling was there without a doubt – she was a mother figure to me.

“How are you doing, son?” Sarah asked as she gave me a hug.

Sarah was wearing an elegant, light blue dress which went down to her ankles.

“Thanks,” she said. “But what do you think about Cathy's?”

I turned around and realized that I hadn’t noticed the dress she’d changed into. While we were talking to Albert, I’d been distracted. Now, my attention was totally on her outfit.

She was wearing a pale yellow dress with white trim. It was form fitting to her body, but not overly revealing – I found it gorgeous.

“You look stunning,” I told Cathy.

“We need to get moving,” Sarah said. “We have to a lot to do today and we need to be on the way to Atlanta by this afternoon.”

“Let me go grab my bags,” Cathy said, before quickly walking back to her room.

“Thanks for letting us go to church today,” I told Sarah. “I think it’ll mean something to Ms. Juanita, and I feel that I owe her something for the kindness she showed me.”

“Where did you sleep last night?” she asked.

“With Cathy?” she asked.

“Please just hurry up and get married,” she said. “I don't like to see you torturing yourself. Now, go get your bags.”

I checked my bags one last time and placed my dagger in a large side pocket. I slung the bag over my shoulder and picked up Chester.

“Now you be a good kitty and take care of Tabitha, alright? I'll be back soon.”

Chester purred, and I let him down.

“I thought I was the only one that talked to my cat like that,” Cathy said, holding Tabitha.

“You have to say goodbye to Tabitha as well. I think she likes you,” she said.

Cathy put out food and water for the cats and we left the apartment.

Outside Sarah led us to a brand new luxury SUV. The white vehicle's surface looked like it had been polished to a mirror finish.

The Wives of Beverly Row 3: Lust Has a New Address by Weeks, Abby
Tropical Terror by Keith Douglass
The Healing Quilt by Wanda E. Brunstetter
Thug in Me by Karen Williams
The Great Snapping Turtle Adventure by Yaruta-Young, Susan
SnaredbySaber by Shelley Munro
Harmony Cabins by Regina Hart
Aneka Jansen 6: The Lowest Depths of Shame by Niall Teasdale
Died in the Wool by Rett MacPherson
Guest Night on Union Station by E. M. Foner