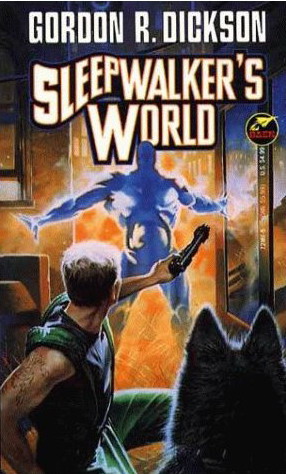 Look for all these TOR books by Gordon R. Dickson

BEYOND THE DAR AL-HARB (coming in November 1985)

THE MAN FROM EARTH

â€œYou want a soft and easy death, sheep?
Then go find other graves. On this hill, men die fighting

As he stepped through the door into the cosmonautâ€™s gym, the same dry smell of old sweat which the air system could never remove filled Martin Pu-Liâ€™s nostrils, and a quarter gravity over Earth normal made his knees bend slightly. The brief case in his hand was suddenly unreasonably heavy. He straightened knees, back, and shoulders against the pull of the artificial gravity. He was no cosmonaut, but at forty-three he was still tall and athletic as ordinary men wentâ€”and it was only a quarter extra weight.

At the far end of the gym Rafe Harald was swarming up the climbing rope, using only his arms. Even with his sweat shirt off and his muscles standing out against the effort, his body did not look remarkable. The body of a systems programmer who played a fair amount of handball, perhaps. Martin walked to the foot of the rope.

They spoke only once more on the half-hour trip.