Read Got A Hold On You (Ringside Romance) Online

Got A Hold On You (Ringside Romance) 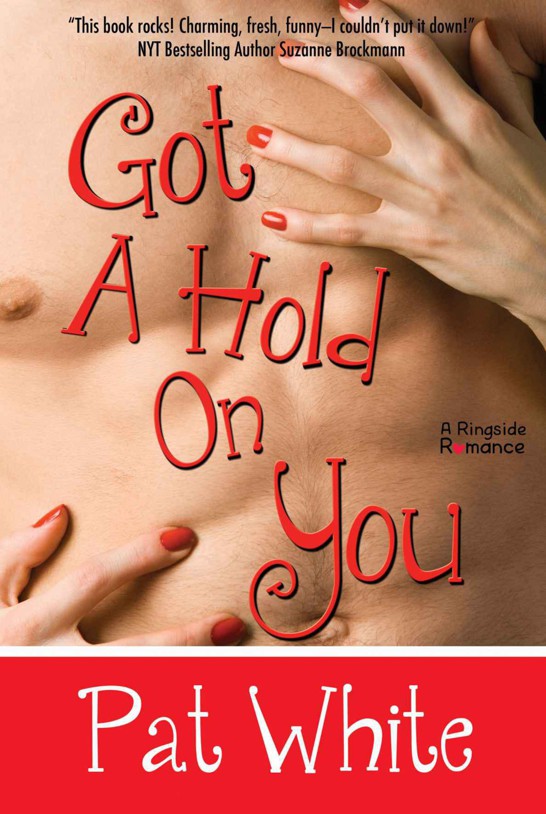 Got A Hold On
You

This re-mastered edition of GOT A HOLD ON YOU is the
first digital edition published in 2012 by Joy Creek Press.

All rights reserved. No part of this book may be
reproduced, scanned or distributed in any printed or electronic form without
permission. Please do not participate in or encourage piracy of copyrighted
materials in violation of the author’s rights.

This is a work of fiction. Names, characters, places
and incidents are either the product of the author’s imagination or are used
fictitiously, and any resemblance to actual persons, living or dead, business
establishments, events or locales is entirely coincidental.

“I said fringe, not feathers! I can’t go out there
wearing feathers. I’ll look like a freakin’ ostrich!”

Frankie McGee stared up at the nearly seven-foot-tall
pro wrestler and realized God was punishing her. This was her penance for not
going to confession, forgetting to floss, and refusing to date the men Nana
Cooper picked out for her. Yep, Frankie’s hell and damnation would be served
sewing seams and sequins for the most outrageous group of men walking the face
of the earth. At least it would this week.

“Are you mentally challenged or something?” The Purple
Panther howled. His echo bounced off the gray cement walls of the cramped
dressing room buried beneath the stands of Chicago’s suburban Lancaster
Stadium.

“I step into the ring in twenty minutes. I can’t go
out there looking like this.” He spun around, the wisp of lavender taffeta
floating in a perfect circle around his bare, muscular torso.

It wasn’t his color.

He could spell. She was impressed.

The Purple Panther ripped the cape off his shoulders
and tossed it at her. It landed on her head. If he only knew she had the power
to send him packing to the local zoo. But no one could discover her true
mission. Not yet, anyway.

“It better be fixed by the time they cue my music, or
Sullivan’s gonna can you before you can say ‘headlock.’”

The sound of giant feet stomping across the hard
cement floor was followed by a crash. Then silence.

“Is it safe?” she asked her fellow seamstress, who’d
kept silent during the tirade.

Frankie snapped the purple cape off her head and
glared at the door.

“Overgrown ape,” she said, sifting through the pile of
sewing supplies on the worktable. This wasn’t supposed to happen. She wasn’t
supposed to have contact with the wrestling wackos.

“Men shouldn’t know the difference between feathers
and fringe,” she muttered under her breath.

“These ain’t no ordinary men, hon. Haven’t you figured
that out by now?” Maxine adjusted her bifocals.

“No, I guess not.” But then, Frankie was still trying
to figure out how she’d ended up here in the first place. Then she remembered:
good old-fashioned duty. Or was it guilt?

Frankie thumbed her tortoise-rimmed glasses to the
bridge of her nose, snatched the ripper, and dug the sharp edge along the
feathered seam.

“They get a little nervous before a big match,” Maxine
said. “It’s only normal.”

“There is nothing normal about this business.”

“Now watch it there, toots. Pro wrestling’s been my
home for more than forty years.”

Real smart. Insult the one semi-normal person in this
crazy business. “Semi” being the key word. After all, how many sixty-year-old
women would wear a skin-tight, fuchsia leotard and tights, topped by a black
sweatshirt with gold lettering that read Rock ’em, Sock ’em, Knock ’em?
Maxine’s graying hair was swept back into a French knot highlighted by pink
glitter and a silver bow. The woman went to great lengths on her appearance
only to sit in a back room of yet another stadium, waiting for the next prima
donna to complain about a crooked seam or missed sequin.

“What do you think?” Maxine held up a pair of faux
snake-skinned trunks. They looked like they’d fit a twelve-year-old.

“You sure you got the right size?”

“Oh, pshaw. These are just right for the Thundering
Tornado to show off his package.” With a wry smile, Maxine winked her false
eyelashes.

Frankie ground her teeth and continued to rip and pull
the purple threads. The Panther had said twenty minutes and she had a feeling
if he could spell he could probably count.

She was a seamstress for only a week, she reminded
herself, the most critical week of the year according to Uncle Joe, owner of
the ridiculous Wrestling Heroes and Kings.

Then Frankie could get back to her real job of figuring out
how to save her uncle’s company from financial ruin from the comfort of a
secluded office.

Hell, she could do anything for one week.

The metal door flew open. Uncle Joe scrambled inside,
slamming the door with a crash.

“We’re ruined, completely ruined! This was our big
chance.” He plastered his portly, middle-aged body against the cement wall, his
wrinkled dress shirt gaping at his belly.

He paced the eight-by-fifteen-foot room, pulling at
his thinning hair until it stuck out like a porcupine on a good hair day.
Frankie glanced at Maxine who was busy tightening the Tornado’s trunks. She
obviously didn’t think there was anything to worry about. Then again, she
probably didn’t know about WHAK’s financial problems. No one did.

Frankie studied her uncle, his eyes bulging, his lips
quivering. He always was one for the dramatic. Still, it might be serious this
time.

“What’s the problem?” she asked, pinning a strand of
purple fringe to the taffeta.

“The new writers came up with a fantastic story line.
Tatianna the Tigress is sultry, sexy, wild -- the perfect reason for Black Jack
to leave his wife!”

“Jack’s career needs help. It’s my job to keep these
guys in the game as long as possible.”

“It’s your job to make money off their blood, sweat,
and tears, you mean,” Maxine snapped.

Uncle Joe paced to the wall and conked his head three
times against the cement. Frankie looked for blood.

“Take it easy, Maxine,” Frankie said. “It’s not like
any of this is real and the talent gets hurt.”

The older woman pursed her bright pink lips and
stabbed the snake-skinned trunks with her needle. Uncle Joe moaned and pulled
on his hair until Frankie thought it would come out in clumps between his
fingers.

“Out with it, Uncle Joe,” Frankie demanded.
Troubleshooting was her specialty.

He whirled around. “Tatianna’s escaped!”

“Escaped? She’s a woman, not a trained seal.”

“No matter. She’s gone. Got a lead on a sitcom looking
for mammoth women who can bench-press five hundred pounds. She took off for
California. It’s over. We’re ruined.” He slid down the wall and buried his face
in his age-spotted hands.

“You mean to tell me there isn’t another female in
this entire company who can fill in until you find another actress?”

“No, no, no.” He shook his head. “They’ve all been
seen in one form or another. I can’t have Monica Moonbeam or Luscious Leeza go
strutting out on Jack’s arm. There is no one else. Jezebel’s got the night off,
Cookie’s already going out on Louie the Lawman’s arm, and Amazing Amanda is
helping with Clyde’s grudge match against the Titanic. What am I going to do?
This was our chance, Francine, a chance to redeem ourselves. I promised the
fans high-stakes drama in the main event, high-stakes drama!”

Uncle Joe smoothed his hair back into place, cleared
his throat and pulled open the door.

“I’m checking on the costumes, Bill. What’s up?” His
voice was deeper, more authoritative than a second ago.

“Wanted to know if you’d figured out our Tatianna
prob—” Bill stopped in midsentence, and his gray eyes locked onto
Frankie. “Brilliant!”

The hair pricked on the back of her neck.

She looked at Maxine, then at Uncle Joe, then back at
Bill. All three smiled the same, devilish smile that made her scan the room for
a quick exit. Unfortunately, she’d have to get by Bill first, formerly known as
Bill “The Bomber” Billings.

“Uh, I have to get this cape to the Panther before he
rips my head off.” Frankie started for the door.

“This is exactly why you’re the number-one guy in the
business, Sully,” the Bomber said, eyeing Frankie. Why did she feel like he
could see all the way through her navy suit jacket, cotton blouse and camisole
to her lace bra?

“I’ll see that this gets to the Purple Panther.” Bill
swiped the cape from her hand and grinned, a gold-capped tooth sparkling front
and center.

When he shut the door, Frankie readied for battle.

“No,” she said, squaring off at Uncle Joe.

He clasped his hands together and fell to his knees.
“Francine, please. Your mother and I—”

“Don’t you dare bring her into this. If she even knew
I was here I’d be disowned.”

“I’d better get this to the Tornado before he throws a
hissy.” Maxine slipped past them and out the door.

Frankie slapped her hands on her hips and glared at
her uncle. “I’ve jeopardized my job to bail you out of trouble. I told my boss
I had to take care of a sick relative. I couldn’t tell him what I was really
doing. My God, if anyone knew I was associated with this…this business I’d be
the laughingstock of the industry. And to think that I’ve lied to Bradley.”

“But I had good intentions.”

Frankie made for the door, but Uncle Joe caught her
arm.

“You know I’d do anything for you,” he said. “When
things were good I shared my success. I loaned you money for college—”

“And bought you your first car.”

“It was roomy,” he offered.

“It was pink with blue pinstripes!”

“I’ve always done my best for you,” he said,
groveling. “I was there for you when that no-good father of yours was
off—”

“Think about your honor, your integrity.”

“A lot of honor I’d have parading myself in front of
twenty thousand people on some idiot’s arm!” She ripped open the steel door.
Uncle Joe threw himself, spread-eagled, across the doorway.

“Remember what I got you?”

“No,” she lied. How could she ever forget the Ice
Skating Barbie he’d given her? Dad had promised to bring it, but she’d learned
early not to believe in Dad’s promises.

“Your sixteenth birthday,” he countered. “The
backstage passes at the U2 concert.”

“Harry the hamster, the autographed Foreigner poster,
Cinderella in the school play?”

“Now wait a minute, I earned that part.”