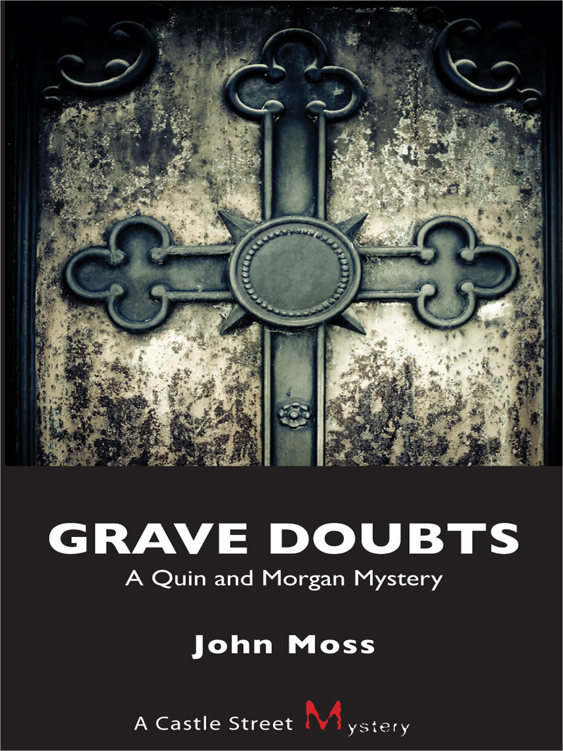 A Quin and Morgan Mystery

All rights reserved. No part of this publication may be reproduced, stored in a retrieval system, or transmitted in any form or by any means, electronic, mechanical, photocopying, recording, or otherwise (except for brief passages for purposes of review) without the prior permission of Dundurn Press. Permission to photocopy should be requested from Access Copyright.

Grave doubts : a Quin and Morgan mystery / by John Moss.

We acknowledge the support of
The Canada Council for the Arts
and the
Ontario Arts Council
for our publishing program. We also acknowledge the financial support of the
Government of Canada
through the
Book Publishing Industry Development Program
and
The Association for the Export of Canadian Books
, and the
Government of Ontario
through the
Ontario Book Publishers Tax Credit program
, and the
Ontario Media Development Corporation
.

Care has been taken to trace the ownership of copyright material used in this book. The author and the publisher welcome any information enabling them to rectify any references or credits in subsequent editions.

Winter in Toronto is a prolonged confrontation with street-blackened slush and ice-laden winds, punctuated at intervals by thick snowfalls of breathtaking beauty. This year, as the winter backed into spring with sullen unpredictability, David Morgan became increasingly restive, sometimes morose, despite the distraction of his various passions.

Morgan currently specialized in tribal antique carpets from Persia, as he persisted in calling Iran. He could not afford to buy the carpets he admired and dragged his partner, Detective Sergeant Miranda Quin, into myriad rug merchants on their travels about town. She had a better eye for colour and design and the dealers tended to address her, rather than him. She sometimes explained they weren’t married, they were cops. This made dealers nervous — unnecessarily, since their profession was homicide.

Miranda enjoyed these carpet excursions, but Morgan had recently developed a competing enthusiasm that puzzled
her: handcrafted furniture by settlers who tried to disguise local softwoods with paint. She knew how succeeding generations added layer upon layer in various hues until the baby boomers came along, bought cheap, and furiously stripped back to the original wood. The patina of ancient colours was now a rare mark of authenticity, good taste, and very high cost. The word
Canadiana
, which Morgan used as if only he knew what it really meant, made her nervous. She preferred the mellow warmth of old pine, newly refurbished. In Miranda’s mind, authenticity gave way to aesthetics; she connected more with the present and he with the past. Morgan assured Miranda she was wrong.

Her partner’s restlessness when they were not immersed in murder paradoxically focused his mind. It also darkened his mood, especially when snow persisted as the nights grew shorter and the days were long. As for Miranda, her natural optimism was affirmed by adversity. A lull in their caseload made her nervous. They both needed something to happen. What, she had thought, could better distract him from seasonal affective disorder — which seemed to pursue him from season to season — than the gruesome discovery of desiccated corpses behind the walls of an old house, locked in a lovers’ embrace?

A winter mosquito hovered above David Morgan’s book as if a bit of punctuation had fluttered off the page. His gaze shifted from the flow of words as he pushed an open hand through air until instinctively his fingers closed and ground against his palm. He turned his hand inward to examine the insect remains and was disconcerted when the force of his breath made them airborne again.

Puzzled by his own cruelty, Morgan set his book down and leaned back on the sofa, staring up into the loft of his Victorian postmodern condo as if he were looking for something. When
the natural light faded and the gloom overhead turned to darkness, he began to pace the perimeter of the room in measured steps. The haze of evening filled his window, pierced by sleet-rimed branches hovering darkly over the rooftops of neighbours across the street. He paused and turned on a table lamp, which cast a dull, luminescent wash across the glass.

Picking up three photographs from the coffee table, Morgan walked to the switch on the brick wall and flicked on the overhead. The front window flared into a huge mirror and he could see himself poised awkwardly at the edge of the room, holding the pictures as if they were notes for a speech.

He doused the lights and the city returned, layered and receding like a Turner montage.

Morgan did not have to scrutinize the photos; their content was inscribed in his mind. They were police shots from a crime scene. Miranda had dropped them off just before dusk.

He had been immersed in his Folio Society edition of
The Persians
. She had come to the door and, smiling ambiguously, offered him a manila envelope and shuffled back down the icy walk, negotiating her footing one step at a time.

“Come in out of the cold,” he called after her.

She leaned against her car, waiting. Her eyes flashed brown and green and golden in the evening light. She shook her head slowly from side to side and her auburn hair took on the rippling hues of the evening sky.

Framed in the open doorway, he removed photographs from the envelope and held them aslant to the light.

“These are cheerful,” he shouted.

She waved and climbed into her 1959 Jaguar XK 150, British racing green — she had only put it back on the road at the beginning of the week, anticipating good weather.

“Where’re their bloody heads?” He waved the photographs in the air as if he could conjure the missing parts.

“That’s the point!” she called through an open window. The Jag’s engine roared mischievously. He repeated his question with a mute, exaggerated mouthing of the words. She swerved the car out into ruts of unplowed slush. He watched as it slithered down the street until she was out of sight.

The pictures were recently taken, but the bodies were historical artifacts. Wearing early Victorian clothes. Regency? Possibly. He would have to check it out.

Miranda was whimsical, but not capricious. There would be an explanation. A male and female, decapitated, bodies entwined in a macabre embrace — perhaps there was something in their symbolic rapport she wanted to share.

Morgan shrugged, trying to be indifferent. People didn’t shrug their indifference when there was no one to see them, he thought.

They had worked together in homicide long enough they were inured to the grotesqueries of death, but murder fascinates. You start with a corpse and work backward, he reflected, until the victim’s demise is the inevitable outcome of what you’ve unearthed. A metaphysical inversion: you turn the quest for the meaning of life on its head. You search for the meaning of death.

Morgan stood still in the gloom of the lamplight, contemplating the pictures in his hand. When he had closed the door after Miranda disappeared, he had determinedly reinserted himself into the travails and triumphs of ancient Persia. Minutes later, his concentration broken by the arbitrary execution of a mosquito, unaccountably alive in the wrong season, he found himself on his feet, motionless, irritated by his desire to resist whatever it was she was up to.

He wheeled about and strode into the glare of the kitchen. Taking a beer from the fridge, he returned to the living room, flicked the lights on full, and settled into the wingback chair
he had years ago released from captivity at a thrift shop on Jarvis Street and had been meaning to have reupholstered ever since.

He spread the photographs across the coffee table and leaned forward to examine them, trying to avoid his own shadow. Then he sat back, keeping the pictures in his peripheral vision, and as the hours rolled by he opened his mind to a montage of images: images of sex and death, of Upper Canadian pioneers, of Darius, Xerxes, and the invasions of Greece, all scudding through at random velocities.

The photographs offered three perspectives on the same tableau. One was from across a room that was evidently in the process of demolition. It showed a sizeable cavity or closet that had been revealed where rotting plaster and clumped layers of wallpaper were sheared from a wall, and inside on the floor there was an ominous rumple of shadows. In the next picture, taken from the doorway of the hidden closet, the bodies of a man and a woman lay closely together, and somehow, paradoxically, they seemed chastely intimate.

In the third, the bodies had been removed to the larger room and were laid out on display for the camera, still with their limbs entwined. On the back, pencilled in Miranda’s handwriting, were the words, “Catherine Earnshaw and Heathcliff.”

Curiously, nothing was noted about the missing heads.

Morgan turned the other two pictures over, but they were blank. It was getting late. He telephoned her anyway. A sleepy voice answered.

“Did Heathcliff have a first name?”

“They’re still at the scene,” Miranda said. “Headless. The superintendent wants forensic anthropologists to see them
in situ
. But tenured scientists don’t work the night shift.”

“Whoever moved them must have already looked for the heads. They shouldn’t have been moved. Amazing they didn’t come apart.”

“They’re frozen in an eternal embrace, Morgan. Like sculpture, flesh turned to bronze.”

“I hope someone has the imagination to bury them like that.”

“In the Yorkshire dales?”