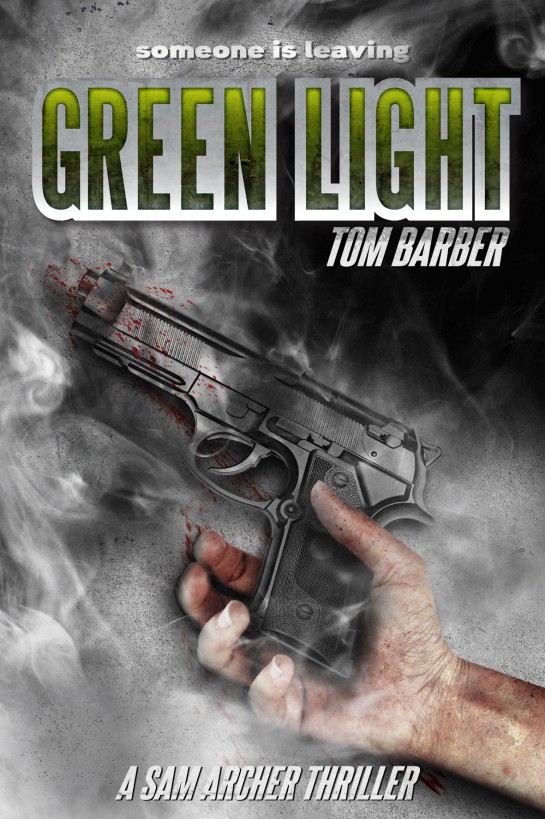 The right
of Tom Barber to be identified as author of this Work has been
asserted by he in accordance with sections 77 and 78 of the
Copyright, Designs and Patents Act 1988.

All
rights reserved. No part of this publication may be reproduced,
stored in retrieval system, copied in any form or by any means,
electronic, mechanical, photocopying, recording or otherwise
transmitted without written permission from the publisher. You must
not circulate this book in any format.

This book
is a work of fiction and, except in the case of historical fact,
any resemblance to actual persons, living or dead, is purely
coincidental.

26 year
old Sam Archer has just been selected to join a new
counter-terrorist squad, the Armed Response Unit. And they have
their first case. A team of suicide bombers are planning to attack
London on New Year’s Eve. The problem?

No one
knows where any of them are.

Archer
is in New York City for a funeral. After the service, an old
familiar face approaches him with a proposition. A team of bank
robbers are tearing the city apart, robbing it for
millions.

The FBI
agent needs Archer to go undercover and try to stop
them.

Three
men have been killed in the UK and USA in one morning. The deaths
take place thousands of miles apart, yet are connected by an event
fifteen years ago. Before long, Archer and the ARU are drawn into
the violent fray. And there’s a problem.

One of
their own men is on the extermination list.

A dead
body is found in Central Park, a man who was killed by a deadly
virus. Someone out there has more of the substance and is planning
to use it. Archer must find where this virus came from and secure
it before any more is released.

But he
is already too late.

On his
way home, Archer saves a team of US Marshals from a violent ambush
in the middle of the Upper West Side. The group are forced to take
cover in a tenement block in Harlem. But there are more killers on
the way to finish the job.

And
Archer feels there’s something about the group of Marshals that
isn’t quite right.

Four
months after they first encountered one another, Sam Archer and
Alice Vargas are both working in the NYPD Counter-Terrorism Bureau
and also living together. But a week after Vargas leaves for a trip
to Europe, Archer gets a knock on his front door.

And it
appears she’s been abducted.

A
nineteen year old woman is gunned down in a Queens car park, the
latest victim in a brutal gang turf war that goes back almost a
century. Suspended from duty, his badge and gun confiscated, Archer
is nevertheless drawn into the fray as he seeks justice for the
girl. People are going missing, all over New York.

And
soon, so does he.

In the year 2113, a US 101
st
Airborne soldier wakes up
after crash landing on a moon somewhere in space. All but two of
his squad are dead. He has no idea where he is, or who shot him
down.

But he
quickly learns that some nightmares don’t stop when you wake
up.

To Andy
Robinson and Jo French.

For
their constant, much-appreciated support since the first day Archer
joined the ARU.

The
nineteen year old woman was in her apartment when her cell phone
started to ring.

Although
she’d been expecting the call, the shrill sound still made her
jump. Out of communication for the past month, nevertheless she
knew that word would have got out about where she’d been. She also
knew that certain people would be more than pissed about it. She’d
cost them a lot of money.

And with
what she was about to do next, she was going to cost them a whole
lot more.

Breaking
off from her hasty packing, she walked across the room and picked
up the phone. She wasn’t leaving the city by herself; she had an
accomplice, a friend she’d known less than a year but someone who’d
done more for her in that short period of time than people she’d
known her entire life. That friend had left her just under an hour
ago, saying she’d call when she’d packed her own things and was
ready to leave. The blonde girl had never been so excited or so
nervous at the step they were about to take.

This was
finally it.

Glancing at a clock across the room which read
9:45pm
, she pushed the
green button then trapped the phone between her ear and shoulder as
she walked back over to her bag.

The girl
froze, midway through tucking a pair of jeans into her
holdall.

The
voice on the other end wasn’t the one she’d been
expecting.

‘
Uptown,’ the young woman lied, stuffing the jeans into the bag
then zipping it up. ‘I’m getting back to work.’

‘
Bullshit. I always know when you’re lying to me. You’re at
home, aren’t you?’

‘
I’m leaving,’ the girl said, dropping to one knee and pushing
her arm under the mattress.

‘
You’d better believe it,’ she replied, withdrawing some dollar
bills folded in half, which she tucked into her back pocket. ‘And
you can’t stop me. Not anymore.’

She
heard a laugh down the end of the phone, which infuriated
her.

‘
Try anything and I’ll go straight to the cops,’ she threatened
angrily, hooking the bag over her shoulder then turning off the
light in her bedroom and closing the door behind her. ‘I’ll tell
them everything I know. All the things you’re doing here.
Everything.’

‘
Are you threatening me?’

‘
You bet I am,’ the blonde girl replied, moving to the
apartment’s front door and unlocking it. ‘So you can take this as a
final goodbye. I’m leaving.’

Three
hours earlier it had been a normal mid-September evening in New
York City. The streets were busy but not unusually so, the
temperature pleasantly warm as commuters made their way home after
a day’s work while others headed into the city, some to start
evening shifts, others to hit the town and meet friends.

However,
in Brooklyn the usual sounds of the city winding down for the
evening were suddenly interrupted.

A black
Ford 4x4 with tinted windows slid around a corner, police fender
lights flashing and siren wailing, other vehicles pulling over to
give it room to pass. The car was heading north-west, being
manoeuvred skilfully through the streets, the engine gunning as it
propelled the 4x4 forward.

The Ford
rounded another corner then headed towards the Atlantic Avenue
entrance to the subway station fifty yards ahead, the last stop
between Brooklyn and Manhattan. However, traffic was far thicker
near the transport hub and the vehicles in front of the police car
had no room to pull over; despite its flashing lights and siren the
Ford was quickly forced to slow.

Before
it had come to a complete stop, the front passenger door flew open
and a young blond man in light blue jeans, white t-shirt and a
black bulletproof NYPD vest leapt out.

Slamming
the door, he raced through the gaps in the queuing traffic and
sprinted off up the street towards the subway. Behind him, the 4x4
pulled a fast U-turn, taking off for the Brooklyn Bridge fifty
yards ahead, leaving behind a sea of startled onlookers.

Six feet
tall, a hundred and eighty five pounds and fast on his feet, Archer
dodged his way past pedestrians, heading straight for the subway.
Those who saw him coming did their best to get out of his way,
others who were not so alert taken by surprise as he forced his way
through.

As he
reached the entrance, Archer went for the far right of the stairs,
taking them two at a time, the balmy heat of the New York September
suddenly intensifying, the air thick with humidity. Cutting his way
through the commuters, he vaulted the ticket barrier turnstile, an
MTA employee in a glass cabin shouting as she spotted
him.

Ignoring
her but pausing for a moment to check the directions for a certain
train line, Archer took off again towards the Manhattan-bound Q
line, twenty yards ahead and down another flight of stairs. As he
raced on, he heard the screech of brakes coming from the platform,
followed by the sound of doors opening.

The
train had already arrived.

Reaching
the stairs to the N/Q platform he hurtled down them, willing a late
arrival to hold the doors. Passengers who’d just exited the train
were flowing up towards him, making his progress even more
difficult, forcing him to fight his way through.

He could
see the train waiting with its doors open.

Leaping
down the last four steps, Archer hurled himself towards the nearest
carriage as they started to close, managing to get his hand in the
gap. Using all his strength to wrest them back open, he forced his
way through and squeezed inside.

Stumbling into the carriage, he quickly regained his balance
as the doors clicked shut behind him.

A beat
later the wheels bit down onto the rails and the Q train lurched
onwards towards its next stop.

Half a
mile above the train, the two detectives Archer had left in the 4x4
were speeding across the Brooklyn Bridge, their flashing blues and
siren assisting their progress as they cut and weaved through the
Manhattan-bound traffic.

Trains
on the New York City subway could reach speeds of 60mph and had the
advantage of a clear run to their next destination, something
Detective Josh Blake knew he couldn’t match as he negotiated his
way across the Bridge, drivers ahead unaware of the urgency of the
situation as he flashed past them. Sam Archer’s NYPD partner, Josh
was a thirty one year old black guy built like a bodybuilder or
line-backer, his usual calm, relaxed demeanour understandably
absent at that particular moment as he gripped the wheel tightly,
turning a sliding right and just missing another car.

Beside
him sat Detective Alice Vargas, twenty nine years old and half his
size, black-haired, brown-eyed, tanned and slender, a beautiful
woman with an inner toughness which frequently took people by
surprise, many of whom judged her purely on her half-Brazilian,
half-American good looks. Having climbed over into the front seat
after Archer left, she was holding her cell phone to her ear with
her left hand, her right hand gripping hold of the arm support as
Josh approached the end of the Bridge.

‘
Talk to me Vargas!’
their team
Sergeant, Matt Shepherd, ordered
. ‘Did you
make it to the train?

‘
Traffic was too heavy, sir! We left Archer trying to get on
board.’

‘
On our way to Canal Street.’

‘
We’re already here but we might not be able to stop that son
of a bitch in time. Get to Union Square right now. Back up’s
already on its way!’