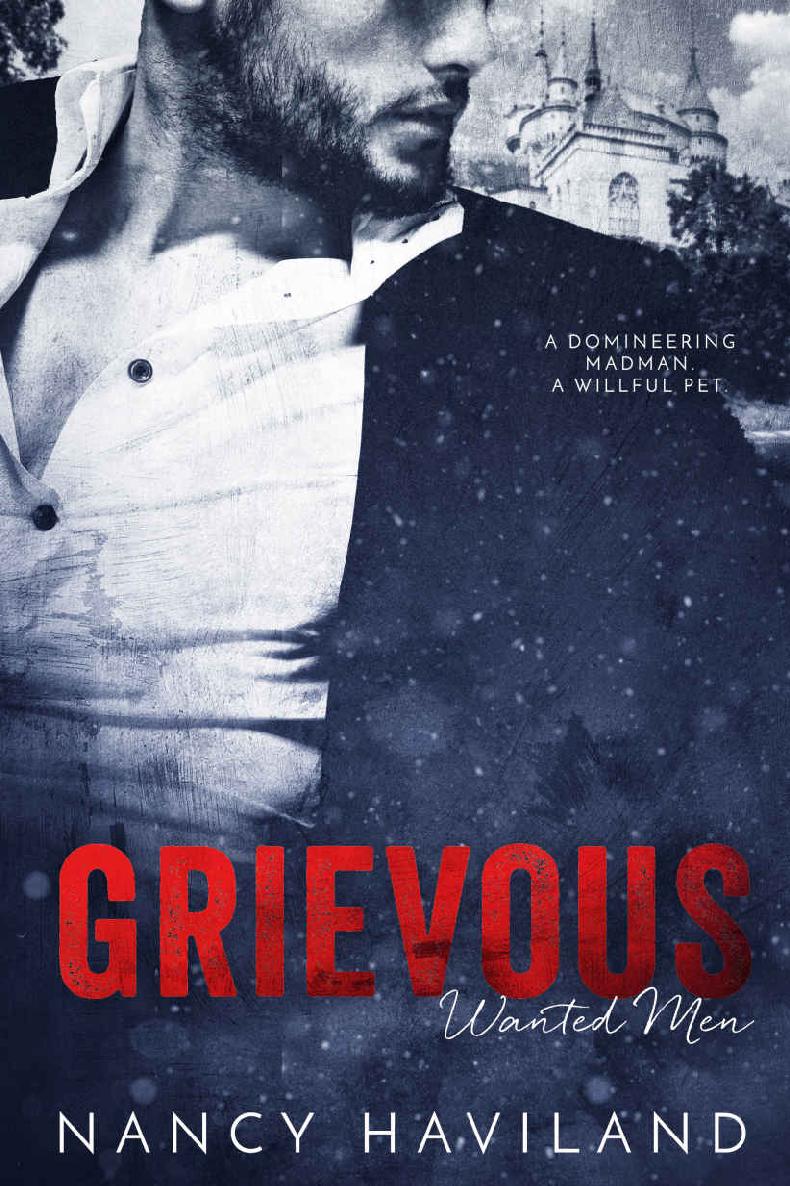 A Love of Vengeance

The Salvation of Vengeance

An Obsession with Vengeance

This book is a work of fiction. Names, characters, organizations, places, events, and incidents are either the product of the author’s imagination or are used fictitiously.

No part of this book may be reproduced, or stored in a retrieval system, or transmitted in any form or by any means, electronic, mechanical, photocopying, recording, or otherwise without express written permission of the author. For permission requests, email
[email protected]

To all the mob dolls out there. Especially mine.

The only thing Yasmeen Michaels imagined was worse than attending a funeral was hosting one. Correction. Hosting one like
this
.

The crowded room at the Waldorf Astoria on Park Avenue in Manhattan ebbed and flowed with conversation and laughter. Laughter. How obscene. What was wrong with these people? Couldn’t they feel that? The desolation in the air? Couldn’t they see it every time they looked at the ones left behind? A man had been shot and killed in a parking garage, left to die alone. And these people were sharing amusing stories that had nothing to do with Markus Fane and the legacy he’d left behind.

Just over an hour ago, she’d been in a front pew in a gorgeous church on the Upper East Side, sitting next to Markus’s older brother. His agony had been silent, but it had kept her on the verge of tears throughout the entire service. Now she was at the reception she didn’t quite understand the point of, her gaze involuntarily wandering—again—in search of the only man who would since his staff had organized it. The man who hadn’t left her thoughts since she’d learned of Markus’s murder on CNN. She’d been at the gallery, working on placements for an up-and-coming artist’s first showing and her laptop had been keeping her company. The news had been nothing but white noise until she’d heard Markus Fane’s name. She’d dropped the easel she’d been unfolding and had watched, learning the viewing would begin any minute, and the lineup was already hundreds of people long. Her monotonous, blinders-in-place, only-one-goal-mattered trip along the highway of life had screeched to a halt, and she’d left work early for the first time since landing her dream job as a gallery assistant at Nebulous World Art. When she’d walked into the funeral home and seen Lucian Fane for the first time in over two years, she’d immediately realized her mistake. She should have sent flowers.

Coming out of her head, Yasmeen focused on Mr. I’m-A-Real-Estate-Tycoon-Wanna-Know-My-Bank-Balance and was happy to see he was addressing his sales pitch to the man on her right. They’d sidled over a few minutes ago. Probably thought because she was on her own that she would be grateful for the company. They were wrong. If there was one person she was comfortable being with, it was herself.

She looked over to where his two bosses stood amid a group of men just like them. Mafioso. Many people would chuckle at hearing the label put to them. Yasmeen didn’t. She’d lived her whole life in New York, and having grown up on the streets in an area of the Bronx that was now becoming a relatively safe place to raise a family, she’d seen and heard enough to know organized crime was real. She’d even “worked” for a family for a few weeks when she was thirteen.

As usual, she’d been putting off going home to avoid “the man of the house” when an Italian guy wearing nice clothes had approached her where she’d sat in the mouth of an alley. As she prepared to bolt, he’d put up his hands in a show of peace that had meant nothing to her, and had offered her a hundred dollars to do a simple job for him. She’d warily listened, and had soon found herself taking a cell phone and agreeing to call the only saved number in it if she saw cops drive by.
That’s it?
she’d asked suspiciously.
And you’ll give me a hundred bucks.

Yeah, sweetheart. But if you take off with the phone or fuck me over in any way, you’ll be sorry. How old are you?

Oh. Too bad. You look older.

She’d almost rolled her eyes right in front of him. She’d nodded her acceptance of his terms without provoking him with a show of disrespect, he’d left, no cops had appeared. He’d returned less than thirty minutes later with his knuckles bleeding and his lip swelling. He’d given her the Benjamin and told her if he needed her services again, he’d find her.

She made five hundred dollars as the enforcer’s lookout before her foster mom had come home from work one night to find her husband beating his bologna at the foot of Yasmeen’s bed while she slept. Of course, the pig’s behavior had been Yasmeen’s fault, and she’d been tossed back into the system. Expected.

The framed photo of the deceased that sat on an easel by the door caught Yasmeen’s eye. She studied Markus’s smiling face. The guy had been gorgeous, and a wonderful person, or so she’d been hearing. She hadn’t known him personally, but from the talk that had floated around the church, she now wished she had. His poor brother. Left alone. Guess that was one good thing about not having a family; never having to say goodbye. How did one move on in life without them? This funeral was only the third she’d ever attended, and none of the deceased had she known beyond a hello. In Markus’s case, she hadn’t even had that.

She cast her gaze further out, searching for the older brother. Again. Shit. She’d done this too many times this afternoon. She was beginning to feel as if she should be following around behind him with her chin in her hands and her eyelashes fluttering every few seconds.

But even as her cheeks heated, she skimmed by man after man until her attention was captured by a pair of pain-filled amber eyes she’d once stared into while she orgasmed to the point of nearly passing out. He was looking at her. Dammit. She wished he’d stop doing that. She blinked. He didn’t. And as it did every time he had her in his sights, something deep in her eager body responded with a rippling heat. Desire in its purest most potent form.

Flashing what she hoped was a sympathetic yet unaffected smile, she turned away and went to place her still full glass of Ginger Ale on the bar—her go-to because the pale bubbly soda resembled champagne and made it look as if she belonged with these people sipping it after burying a man. Staying close to the walls, she aimed for the most unapproachable person in the room. Sorin Arcos. Most people steered clear of the well-dressed but perpetually glowering meathead; Yasmeen liked him. He was quiet, and he watched his boss’s back with an intensity she found endearing. Made her feel a little less of a loser for watching the same man’s ass in a similar way.

She stalled when a blond man a few years older than her stepped into her path. Through her impatience, she adopted a pleasant smile, yet another face she’d perfected to hide her distaste of rich, pushy collectors trying to rob underpaid, starving artists. “Yes?”

“I saw you speaking with Brad a few minutes ago. Are you with his firm?”

No clue who Brad was, so that must mean she wasn’t with whatever firm this guy was referring to. She shook her head. “No. Sorry.” She went to move around him, but he stepped to the side to block her.

“Are you doing business with Merker & Phillips? Or maybe you’re with Fane Enterprises…?”

If the guy looked at her modest cleavage one more time, she was going to backhand him. “No, I’m with neither.” Her tone was considerably cooler. “And before you ask, I’m not associated with
any
one here. Excuse me.”

He seemed to relax. “I knew it. My buddy wasn’t sure, but my radar went off the minute I saw you. Everyone knows for a fact Fane is unattached, so he had to have hired you to play arm candy. I saw a few others approach you and was damn happy to see you’re still taking cards.”

Her blood pressure went up with every word out of his mouth, but, to prevent a scene, she kept her lips sealed and went to brush by him. He had the balls to put a hand on her hip.

“Did Fane book you for the whole day?” he asked quietly. “If not, my buddy and I will gladly offer double whatever the going rate is for a few hours of your time.”

And there it was. A flat-out offer to hire her for sex. Adrenaline punched into her system as she looked down at herself. What the hell was it about her sedate black dress that made him think she was a prostitute? What? Because she was here alone and had accepted three cards from three different men who’d voiced their interest in abstract work, contemporary sculptures, and art nouveau, respectively?

Yasmeen’s street rat came out of hiding and had her stepping into the man. She reached down and took his hand off her hip. “Funny,” she said, holding her smile and remaining quiet out of respect for the Fane’s even though she wanted to call this asshole out in front of everyone. “I never expected to find such a nervy piece of shit in attendance. To be clear, I’m not working this room, looking to make a buck from this family who is grieving the sudden and tragic loss of a loved one. But even if I were so disgusting, you think I’d spread these legs for a guy trying to pretend he didn’t grow up playing grounders in a schoolyard in the heart of Brooklyn? FYI; your Hampton’s accent is as fake as those veneers.”

His jaw made a clacking sound as it snapped shut, his bullshit teeth clenching tighter and tighter because she was sinking her long nails right into the bones and tendons on the back of his hand.

“Do yourself a favor and dig deep. Maybe you’ll find some goddamn respect for the man who just lost his life.” She shoved his hand away. “And be proud because your behavior just shamed your mother.”

Rather than head straight over to Sorin, she swept by a boulder of a man with long black hair and a nasty scowl twisting his goatee. He’d obviously heard the exchange and found it as deplorable as she did because he was blatantly shaking his head at the blond.

She pushed through the doors into the restroom that was only feet away and went straight over to the sinks. Her hands were shaking, and her face felt as if it was on fire. Catching a glimpse of herself in the mirror, she looked as calm and unaffected as she always strived to be. Good. Her mask was firmly in place.

“I think we should leave soon. Call me a bitch, but I agree with hubby; your color isn’t good.”

“You always agree with him.”

“Because when he rides your ass, it’s usually legit. No one will judge you if you want to leave, hun. This must be bringing back horrible memories.”

The Wolf's Mate Book 1: Jason & Cadence by R.E. Butler
The Restoration of Flaws (The Phantom of the Earth Book 5) by Zen, Raeden
Century #4: Dragon of Seas by Pierdomenico Baccalario
The Chaplain's War by Brad R Torgersen
Luke's Absolution (The Colloway Brothers Book 3) by K.L. Kreig
Lunar Mates 1: Under Cover of the Moon by Under the Cover of the Moon (Cobblestone)
Mated To The Devil by Eve Langlais
Day One (Book 3): Alone by Mcdonald, Michael
Muriel Pulls It Off by Susanna Johnston
El último deseo by Andrzej Sapkowski