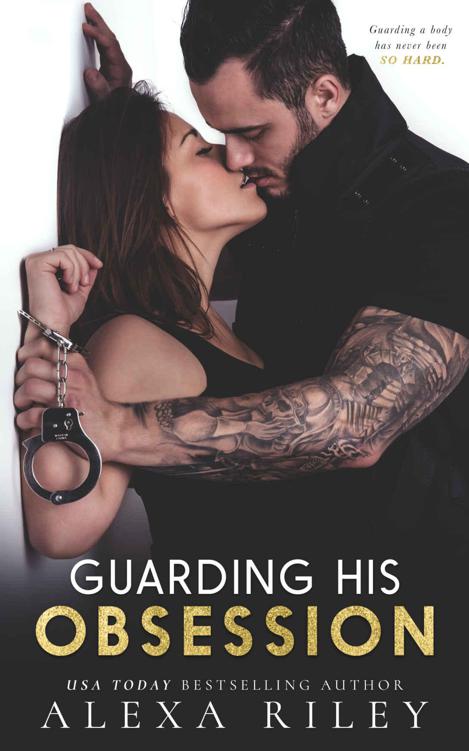 No part of this publication may be reproduced, distributed or transmitted in any form or by any means, including photocopying, recording, or other electronic or mechanical methods, without the prior written permission of the publisher, except in the case of brief quotations embodied in critical reviews and certain other noncommercial uses permitted by copyright law. For permission requests, email to [email protected]

W
hen Drake Hart's
security team is hired to find a stalker, he has no idea what's in store for him. However, the day Zoey Lewis' picture lands in his lap, there's nothing he won't do to save her. He's always been quiet and shy, but seeing her changes everything.

Zoey is missing a filter when it comes to interacting with people. She's used to being lost in her computer and being taken care of by her sister. She's an oddball, and people find it hard to deal with. But when Drake Hulk-smashes his way into her world, she doesn't feel so out of place.

When Zoey is threatened and needs protection, will Drake save the day? With a body like his, all signs point to yes!

W
arning
: He owns a security firm. She's a little nerdy. It's a classic trope and a recipe for sugary-sweet erotica!

F
or all the
awkward girls that think they’re alone.

“
I
don’t need a bodyguard
,” I huff into the phone, holding it between my shoulder and ear as I dig through my messenger bag for my keys.

“This isn’t up for debate,” my own assistant snaps through the phone. Maybe having my older sister as my personal assistant wasn’t the best idea. That’s a lie and I know it. Hell, who am I kidding, she holds my life together. I might be the brains of this duo, but she’s way more organized than I am. It probably has something to do with her modeling career and always having so many things going on in her life at one time. She’d done it from the age of seven all the way until her mid-twenties when she retired. Elle is the order to my chaos, and I need her.

Now that I think about it, I don’t think I even hired her. She just barged in, in true Elle form, and took over. It wasn’t like she needed the job. She saved her money and I, in turn, helped her invest it in ventures I knew would do well.

“Grr. Where are these stupid keys?” I mumble to myself, digging deeper into my seemingly bottomless bag.

I roll my eyes, only because Elle isn’t here to see it. I can hear the smug tone in her voice. I reach into the front left pocket and pull out my keys.

“It’s creepy when you do that.”

“No, what’s creepy is the stalker who seems to only be getting worse.” I hear the worry in her voice. I’d probably be the same way if this was directed at her. But a stalker for me just seems strange. If anyone should be stalked, it’s her. Some of the letters she would get when her modeling career was in full swing went from weird— like wanting to shave off all their hair and send it to her—to crazy, men offering her the world if they married her. Even telling her they wouldn’t make her sign a prenup. You should see the way men get all dreamy eyed around her. It’s actually kind of funny. How they follow her around like lost puppies with no brain. I’ve seen firsthand the smartest of men go utterly dumb in her presence. I’ve worked with some of the most intelligent, gifted men in America, but when Elle would show up to drop something off for me, they’d go from brilliant to incapable of putting a sentence together.

I insert my key in the door, turn it, and the alarm to my condo starts to sound. I hit the disarm button on my keychain before dropping the keys back into my bag, not into my left front pocket. Just a little rebellion because Elle can’t see me.

“Okay. I’ll meet with someone.” I give in easily because there really isn’t much of a choice. Fighting Elle on something she wants is like fighting a brick wall. It’s better to spend your energy elsewhere.

I flip the lock back in place and turn, hitting a concrete wall of a man.

“Good, he’s already there,” I hear Elle say as my eyes travel up and up an endless span of chest. Up, up, up, until my eyes finally land on a hard face with a clenched jaw.

I blow my hair out of my face, trying to get a better look at him. Jesus. He’s hot in that oh-my-God-he-could-crush-me way. Wait, is that hot?

It’s then I realize he has his hands locked on my shoulders, holding me in place. I likely would have landed on my ass as hard as I ran into him if he hadn’t grabbed me. My body presses against his, and I watch his nostrils flare as he takes a deep breath, like he’s breathing me in.

His arms release me, and one hand goes to the glasses on my face, fixing them.

“What’s he made of? Concrete and sex?” I whisper into the phone like the man in front of me can’t hear me. He has the words “Hart Security” on his chest. I watch as he takes two steps back from me.

“Is he hot?” my sister asks, seeming to have perked up at my words.

“
Hot
is putting it mildly.”

The man in front of me narrows his eyes as they travel down my body. I’m short, with lots of curves, and for the first time in my life, I wonder if a man likes what he sees when looking at me. My sister always gets the male attention. This isn’t new to me, nor does it bother me. It is what it is.

It’s how it's always been. She’s tall, blonde, and has the bluest eyes. She’s also skinny as hell, even though she could out-eat me. I’m the complete opposite. Short, lots of curves, with brown hair and eyes. I tend to blend in. I actually enjoy this since I’m not the best conversationalist. I have this problem where I have no mouth-to-brain filter, and that seems to make others uncomfortable. I’ve seen Elle cringe on occasion from the things that have slipped out of my mouth. It doesn’t bother me like it seems to everyone else, though.

Just like Mr. Sex here, who has already taken a few steps back from me.

“Wow. He’s got to be amazing. I don’t think I’ve ever heard you call someone hot.”

My stomach flutters at her words. They ring true. No, I don’t think I can ever recall a time when I thought a man was hot. Symmetrical, maybe, but he definitely isn’t that. His nose looks like it’s been broken a time or two and a small scar runs across his right cheek.

I wonder if he has more. I take a step towards him, wondering if he’ll let me see. I have no idea why I have the need to know if he has more. It doesn’t make sense. I always have a reason for doing things and thinking things.

“Do you have more scars? Can I see them?”

I hear his intake of breath, and then Elle bursts into giggles.

“Did you just imply you wanted him to get naked?” Elle says through laughter.

The man in front of me clenches his fists, and I wonder if this is another one of those times I’m making someone uncomfortable again.

“I…” I pause to think about it for a second. I didn’t think about him having to undress for me to see more of him, but now I like the idea. I lick my lips.

“Let me talk to him,” Elle says, still giggling.

I clench the phone in my hand for a second before I pull it from my ear. I’m thankful she isn’t here in person, and I instantly feel guilty for that thought. I love my sister, but the idea of her getting this man’s attention, a man I don’t even know, bothers me. That can’t be normal.

I hit speakerphone and let her know she’s good to go.

“Mr. Hart, it’s Elle. We talked on the phone this morning. I just wanted to thank you again for taking the job personally and not handing it off to someone else. I’m told you’re the best.”

“Ms. Barber, the security here is shit. I got in past the alarms completely unnoticed. The doorman didn’t even give me a second look.” His eyes lock on mine again for the first time since I was plastered to his body. “Furthermore, your sister seems to have no fucking problem with a man she doesn’t even know standing in her home.”

The last bit comes out in a yell and makes my eyes widen.

“I’ll call you back.” I click the end button on the phone screen before narrowing my eyes at Mr. Hulk-man over there. Where the Hulk turns green and gets all giant, this guy seems to go all red and appear even larger than his massive self.

“Listen here, Hulk. You can take your incredible body and vacate my home. I won’t be needing your services.”

My face warms a little at the word
services
.

He takes two steps towards me, crowding my space, a space he didn’t seem to want any part of a little while ago. He lowers himself so we’re nose to nose.