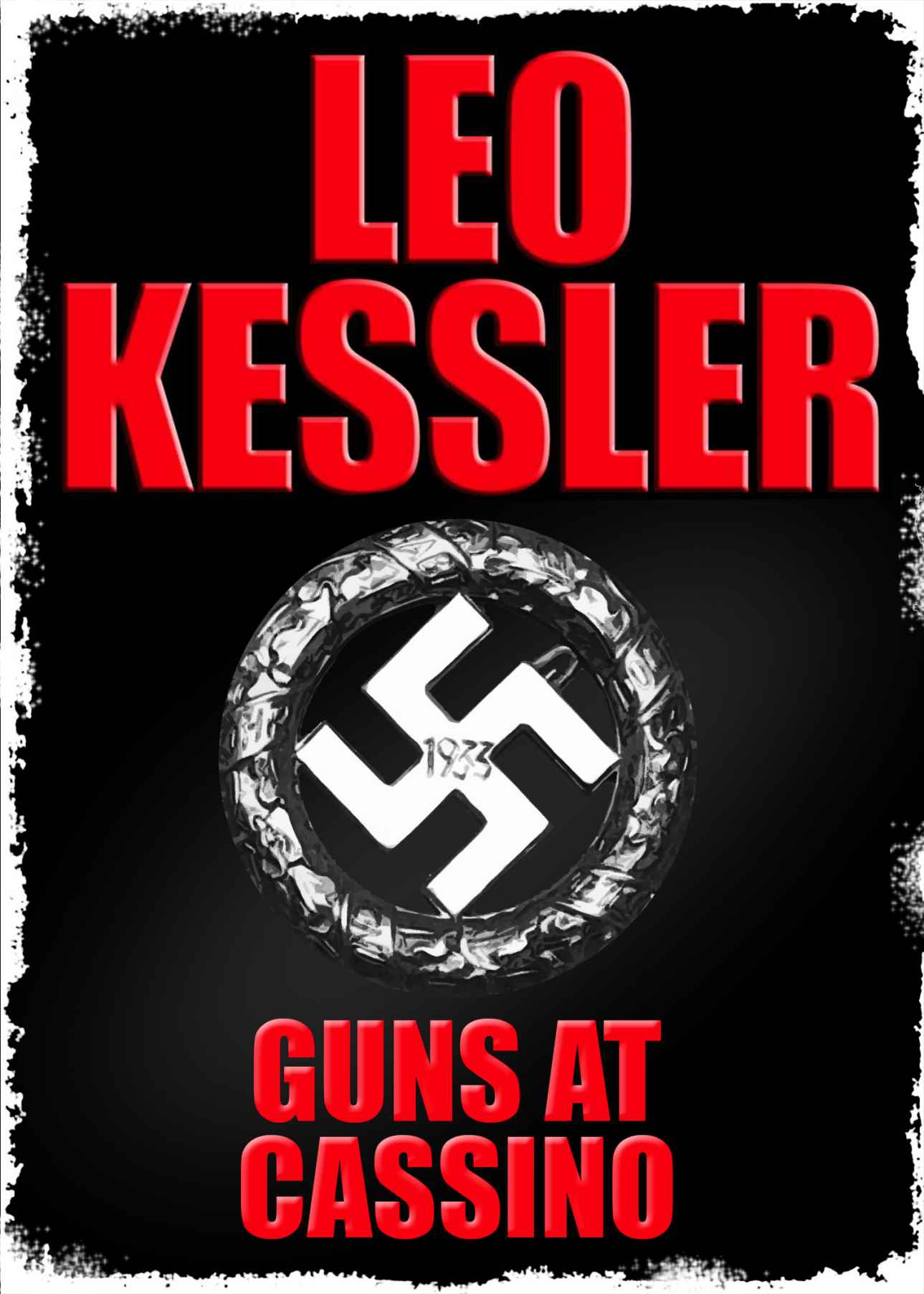 Leo Kessler has asserted his rights under the Copyright, Design and Patents Act, 1988, to be identified as the author of this work.

We had been told, on leaving our native soil, that we were going to defend the sacred rights conferred on us by so many of our citizens ...

We were able to verify that all this was true, and, because it was true, we did not hesitate to shed our quota of blood, to sacrifice our youth and our hopes. We regretted nothing, but whereas we over here are inspired by this frame of mind, I am told that in Rome factions and conspiracies are rife, that treachery flourishes and that many people in their uncertainty and confusion lend a ready ear to the dire temptations of relinquishment and vilify our action.

I cannot believe that all this is true and yet recent wars have shown how pernicious such a state of mind could be and to where it could lead.

Make haste to reassure me, I beg you and tell me that our fellow citizens understand us, support us and protect us as we ourselves are protecting the glory of the Empire.

If
it
should
be
otherwise
,
if
we
should
have
to
leave
our
bleached
bones
on
these
desert
sands
in
vain
,
then
beware
the
anger
of
the
Legion!

‘
In essence, we must take certain action if the Führer will not make peace before it is too late.'

Part Three: Battle for the Perimeter

‘Gentlemen, this is where we are going to stand. I have no further orders from Smiling Albert than these -
stand
and
fight
!’

The Leader turned to the sombre-eyed valet, waiting attentively at the door of his bedroom.

`You
may go, Linge. I won't need you any further tonight.'

Linge,
who was also a colonel in the SS, bowed. He knew the formula. His chief wanted to be alone with his mistress. The long boring evening at Obersalzberg was over. He would be glad to climb into his bed and sleep without interruption, leaving the Leader to enjoy the plump favours of the red-cheeked, ex-photographer's assistant.

`Good-night,'
Linge said softly, omitting the usual, 'sleep well, my Leader.' Under the circumstances, it would seem an impertinence. As he closed the door of the bedroom behind him, he heard his chief call,
‘Tschapperl’
, that slightly contemptuous Bavarian pet name he had for his young mistress.

Eva
was waiting for him in her absurd frilly bedroom which was a clear proof of the essential triviality of her mind - just as her conversation had been the whole evening in front of the big log fire. But then, the middle-aged Leader told himself, he could not afford to keep a clever woman as his mistress. As he often remarked to his cronies of the inner circle - Speer, Hoffmann, and the like - an intelligent man should always take a primitive and stupid woman to satisfy his sexual needs.

He
dismissed the thought from his mind. Tonight he must concentrate on his pleasure; after all that is why he had flown from his headquarters at the 'Wolf's Lair'. To enjoy a couple of days' leisure on the 'Mountain', forgetting the war, even the terrible mess on the Italian front. He let his gaze fall on her body, displayed as ordered, her ample breasts clearly visible through the silk nightdress, bought expressly for the purpose by Bormann in Paris. Eva's legs were already spread.

`Are
you ready?' he asked, a slight catch in his guttural voice.

`Yes,
Adolf,' Eva said on the bed and lowered her eyes. Even after all these years she could not get used to the strange forms of sexual pleasure enjoyed by the greatest man in Europe. She was naive - another Gerdi Raubal. But Gerdi, his niece, was long dead: a suicide.

`Good,'
he said, beginning to take off his tunic. 'Then take up your nightdress, please.'

She
blushed and did as he commanded. She could hear him breathing a little harder now and out of the corner of her eyes, she could see how his fingers trembled as they fumbled with his tie. Finally he was naked and ready, his body pale and plump, so unlike the hard muscular firmness of that Italian officer so long ago.

Hastily
she obeyed. For an instant she looked down at his black shock of hair, now lightly flecked with silver, as he slid his head the length of her white body. The Leader found what he sought. She gave a shudder of pleasure and disgust. Then she raised her gaze to the ceiling and let her body go limp so that he could have his way. Now the man, who commanded the destinies of two hundred and eighty million Europeans, crouched animal-like, with his head between her thighs. Adolf Hitler was taking his pleasure.

Eva
Braun stiffled a yawn and reached for another chocolate. The Führer was still not tired. But the restless flickering of his dark eyes was gone. She had succeeded in satisfying him - thank God! Now she would have to entertain him until he felt it was time to retire to his own room. But the Führer was often like this, unable to sleep unless his personal physician Dr Morell, who kept injecting extracts from sheep testicles and Bulgarian peasant blood into the Führer, gave him yet more pills.

Now
he sat there on one of her armchairs, clad in his pyjamas, his hair a little tousled still, brooding, it seemed. There was no sound save for that of the wind howling around the 'Mountain' and the steady stamp of the sentries from the `Bodyguard' on the hard snow below. (1)

`What
are you thinking about, Adolf?' she asked softly, savouring the name she never dare use save when they were alone in the privacy of her bedroom.

Hitler
rose and stared out of the window at the Northern Lights, which were bathing the legendary Untersberg across the valley a dramatic crimson.

`The
war,' he replied gruffly, 'what else but the war!'

`But
you are on leave,' she protested gently and helped herself to another of the chocolates he had brought her. 'You must forget the war for a while.'

`I
am never on leave. The Leader of the German people can never rest, day or night. When one controls the destinies of a great people there are two - '

`
Possibilities
,
'
she interrupted him cheekily, using his favourite opening gambit.

His
harsh face broke into a slight grin.

‘
Tschapperl!
’ he said, his voice heavy with mock menace, `what do you know of such things. But, perhaps you are right.' He returned to his chair again. 'Good, then Eva, you will amuse me – take my mind off the war.
Talk
.
'
He barked the word out like a military command.

Eva
Braun was not offended. She was glad that she had been able to drag his mind away from the terrible conflict which had now been going on for over four years.

`Well,'
she began, 'the last time
I
went on leave, I drove to Italy. That was just before the war.'

`Don't
mention Italy to me. Those damned traitors!' he exclaimed.

She
overheard the objection.

`But
it was beautiful, Adolf,' she enthused. 'The sea, the buildings, the countryside! Now I can understand why Goethe said that every German desires to go south to Italy ...’

Adolf
Hitler sighed at such naivety, but he let her talk his mind already wandering to the situation in Italy which had deteriorated rapidly ever since that traitor King Emmanuel had deposed his friend Mussolini and invited the Allies to invade his country. Things had been bad enough already, with the Bolsheviks steadily pushing his armies back towards Poland with no indication they could be stopped before they reached the frontiers of the Reich itself. But now the Allies were on his very doorstep too. If it had not been for the fact that their generals were too cautious, he might well have been battling with them now on the borders of the East Mark itself. (2) And the Wehrmacht simply did not have the men to spare to fight on two major fronts. What in devil's name was he going to do?

`We
spent a day at Cassino,' Eva rambled on. Her mind was on that beautiful Italian Air Force officer who had ditched her Gestapo bodyguard and driven up to the great monastery on Route Six which snaked down the coast from Rome. 'It was beautiful. It was built by Saint Benedict – he's buried there. Then there is the high altar screen. It is supposed to have been done by Michelangelo - '

`That
rank homosexual!' Hitler interrupted coarsely, tearing his mind from the miserable situation on the Italian front. 'If he had lived today, I would have had him placed in a concentration camp with the rest of those warm brothers!'

`But
he was a really great artist,' she protested mildly. 'And Monte Cassino is a cultural treasure.'

`What
did you say?' he barked.

She
looked at him,. puzzled and alarmed at the sudden change in his mood.

Hitler
sprang to his feet. He walked over to the massive picture window.

`A
cultural treasure,' he echoed, staring out at the Northern Lights, shimmering now in all colours of the rainbow like the last act of the
Goetterdaemmerung
, staged by the young Wagner at Bayreuth. '
A
cultural
treasure
,' he repeated with more emphasis, the great idea slowly beginning to take shape in his fertile mind. 'Monte Cassino and the monastery dominating the major western coastal route to the Italian capital.'

Eva,
sprawled out on the rumpled bed, chocolate in her plump hand, her mouth opened stupidly, stared at him in amazement, as Adolf Hitler strode to the door of her room, flung it open and yelled at the top of his tremendous voice:

Last Chance to See by Douglas Adams, Mark Carwardine
The Rotters' Club by Jonathan Coe
The Queen of All that Dies (The Fallen World Book 1) by Thalassa, Laura
The Girl in the Box 01 - Alone by Crane, Robert J.
Love Lust by Unknown
Rouge by Isabella Modra
Running Wild by Denise Eagan
TICEES by Mills, Shae
Red (Black #2) by T.L Smith
The Design of Future Things by Don Norman