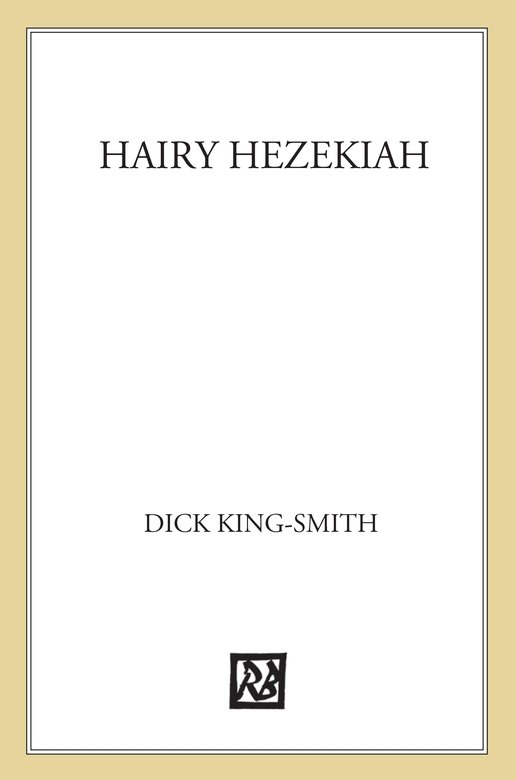 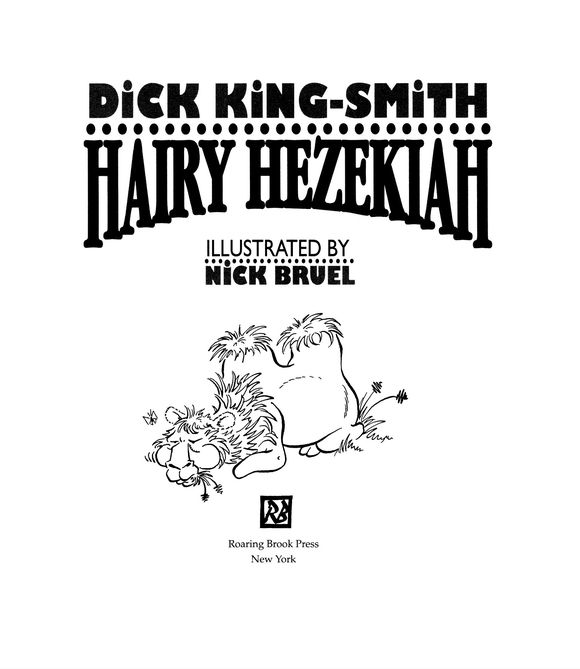 In a zoo in an English city there lived a camel. Do not think that I am being a liar, when I say his name was Hezekiah. It really was, honestly. He was a Bactrian camel, very big and heavy and covered with a lot of dark brown hair. On his back he carried two large humps. He was well-fed and kindly treated, but in one way Hezekiah was different from all the other animals in the zoo.
They had friends to talk toâthe lions in the Lion House, the gorillas and chimpanzees in the Ape House, the birds in the Aviary, the monkeys in the Monkey Templeâthey all had others of their own kind with them or close by. They could roar or scream or whistle or chatter at one another as much as they liked.

But there were no other camels for Hezekiah to make friends with. He was the only one, and he lived in a wire-fenced grass paddock all by himself.
Hezekiah, you will have guessed, was lonely. Visitors to the zoo came and stood by the fence and looked at Hezekiah. They could hear him
making deep grumbly noises as he stared out at them through his heavily lashed eyes, but they could not know that he was in fact talking to himself out loud. 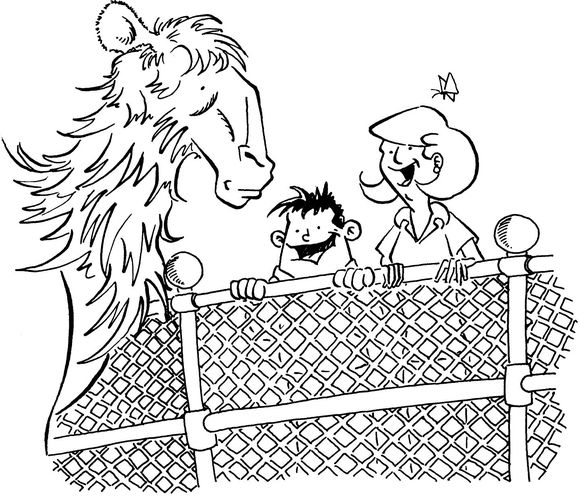 He had fallen into this habit because he had no camel friends to speak to, no camel voices to listen to, and, though he didn't suppose the humans could understand him, it comforted him to speak his thoughts to the watching people.
“Wish I had a pal,” he often said. “Don't suppose you care but I'm the only camel in the zoo, did you know that?”
Often, in reply to Hezekiah's growling and snorting and the bubbly sounds that he made through his thick rubbery lips, the visitors made noises too. But of course Hezekiah could not understand what they were saying to him, and anyway he couldn't hear much of it because his ears were very hairy inside.

Â
Â
One day Hezekiah was standing by the gate to his paddock, staring out through his heavy eyelashes. It was a bitterly cold winter's day. There were hardly any visitors in the zoo and none at all near him.
He didn't mind the cold a bit as his coat was so thick, but he was more than usually grumpy because he hadn't yet been fed.
“Where's my blasted breakfast?” he growled. “I'm starving. My humps feel all floppy.”
Camels store fat in their humps, and if they are really, really short of food, the humps shrink in size. Hezekiah wasn't actually starving, of course, just hungry.
When at last he saw his keeper approaching, carrying a bale of hay, he shouted rudely at the man. “Get a move on, slowpoke!” he boomed. “You're late and I'm famished!”
The keeper was a fairly new one who hadn't been at the zoo for long. The only thing he knew about the camel was that he seemed to be a bad-tempered old thing who was always moaning and groaning.
“Keep your hair on, Hezekiah,” he said as he slid back the metal bar that kept the gate shut. Now he opened it, threw in the bale of hay and cut its strings. “There you are, you old grouch,” he called, and he went out again, closing the gate behind him.
Hezekiah tucked into his hay greedily, swallowing it down in great lumps. Like a cow, he would later lie down and chew the cud. When night fell, he got to his feet and, on his huge splayed hooves, lumbered over to the gate of the paddock and stood, as he often did, staring out.
There was no one for him to talk to, for all the
visitors had left the zoo, so, as usual, he talked to himself. 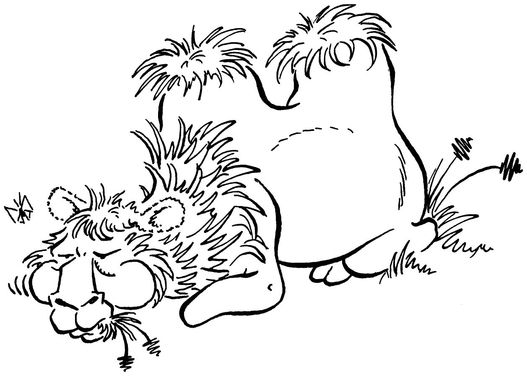 “I wish,” said Hezekiah, “that I could open this gate. I could have a walk around the place, meet some other animals, make a pal perhaps, even though I'm the only camel in the zoo. I wonder if I could somehow open the darn thing. Perhaps
it's something to do with that metal bar. Maybe I could shift it.”

He lowered his long neck and with his thick blubbery lips he mouthed at the bar. It was stiff and for a while he could not move it. “Easy enough for keepers with fingers and thumbs,” he grumbled, “but not for Bactrian camels.”
He was on the point of giving up, but then he said to himself, “Oh, come on, Hezekiah, one last try.” He gave it one last push and at last the bar slid across and the gate swung open. “Bless my humps!” he said, and walked out.
2

The whole of the zoo was dark now, except for lights in a few of the buildings. As Hezekiah made his way toward the nearest one, he heard from within it a deep rolling roar that ended in a couple of grunts. So he made his entrance through the half-open door into the Lion House.
Now, people cannot understand camel talk and camels can't understand human language. But in one way almost all animals are cleverer than
humans, because they can understand one another! To Hezekiah the noise that the lion was making meant, “I am the lion, the King of Beasts, and I'm locked up in this horrible cage. Darn it!”
The camel made his lumbering way into the dimly lit Lion House and walked along in front of the row of cages. At the sight of him, there was a burst of noise from within them.
“Mom! Mom!” cried some cubs. “Whatever is that thing? Will it hurt us?” “Of course not,” replied a lioness. “First, it can't get into our cage, and second, if it could, I'd kill it and we'd eat it.”
“And so would we if only we could get out of our cages,” growled several lions.

“But what is it, Mom?” said the cubs.
“Ask it,” said their mother.
So they did.
Hezekiah stopped and stood, looking into that cage. He didn't like the smell of the lions, so he closed his nostrils as all camels can. He didn't like the sight of them either, with their gleaming teeth and sharp claws, and certainly he didn't like what they had said they wanted to do to him.
But the bars of the cages looked nice and strong, thank goodness, and, in reply to the cubs' question, he said, “Good evening” (for politeness costs nothing). “I am a Bactrian camel.”
“Bactrian camel?” said one of the cubs. “What have you got on your back?”
“Two humps.”
“What's in them?”
“Fat,” said Hezekiah, and all the lions licked their lips.
The biggest of the lions came forward to the front of his cage.
“What are you doing in here?” he asked. “Why aren't you in the Camel House?”
“There isn't one,” said Hezekiah. “I live in a paddock.”
“Well, why aren't you there?” 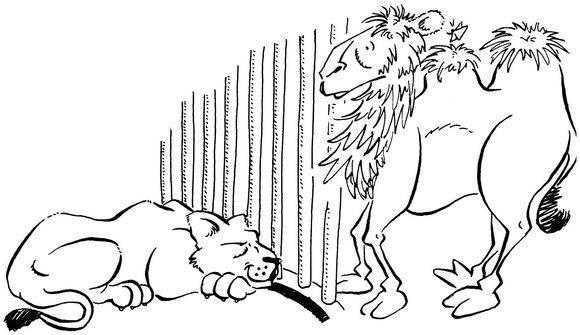 “I've escaped,” replied Hezekiah, and a huge sigh of envy rippled through the Lion House.
“How did you manage that?” asked the lion, moving closer to the bars. “Oh, and come a little closer, will you? I'm a bit deaf.”
I'm not that stupid, thought Hezekiah.
“Tell you some other time,” he said, and he turned and hurried out of the Lion House.
He walked along a path to the next building, which was the Ape House, and made his way inside. In the first cage was a big gorilla.
“Good evening,” said Hezekiah.
“Is it?” replied the gorilla. “Why?”
“I've escaped.”
“All right for some,” said the gorilla gloomily.

“Forgive me for asking,” said Hezekiah, “but you don't want to eat me, do you?”
“Eat you? No, I'm a vegetarian.”
“Oh, that's a relief,” said Hezekiah, and he moved on to the next cage, in which were two chimpanzees.
“We heard that,” said one.
“And before you ask,” said the other, “we are also mostly vegetarians. But now and again we do like a nice bit of monkey meat.”
“But not camel meat?” wondered Hezekiah.
“What's a camel?” asked the first chimp.
“I am.”
“Oh,” said the second. “No, thanks.” He shouted down to the other chimpanzee cages. “Would any of you chaps like to eat this fellow?” and in reply there were loud screams of laughter.
Hezekiah could still hear the chimpanzees laughing as he made his lumbering way along to
the next building in the zoo, which was the Aviary. Inside, almost all the birds were silent, asleep on their perches, though there were some owls who hooted softly at the sight of an intruder. 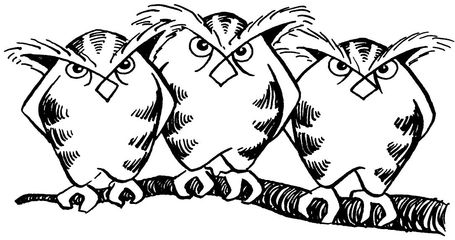 “Who? Who?” they said. “To wit, who?”
“Evening,” said the camel. “My name's Hezekiah. I'm a Bactrian camel.”
“Tough luck!” said a voice.
Hezekiah peered in and saw a gray parrot staring at him.
“Why do you say that?” he asked.
“Look in the mirror,” said the parrot.
I've been threatened, thought Hezekiah, then laughed at, and now insulted. What next?
He made his way out of the Aviary and walked toward the Monkey Temple. This was a big round pit, inside of which were flights of circular steps leading up to a stone building in the center. It had a domed top and looked something like an Eastern temple.
Hezekiah peered over the edge of the wall that surrounded the pit. He could see no monkeys, either on the floor or on the steps.
“Good!” he said loudly. “There's no one about to be rude to me.”
At the sound of his deep booming voice, a number of little heads popped out of the small windows in the Temple, and he heard a chorus of angry shouts.

“Be quiet!”
“Push off!”
“Sling your hook!”
“Hold your tongue!”
“Shut your trap!”
As he trudged away from the Monkey Temple, Hezekiah began to think that escaping wasn't much fun. “I wanted to make some friends,” he said gloomily to the surrounding darkness. “At least nobody was being nasty to me in my own paddock. I wonder what's the next place I shall come to?”
Even as he said this, he saw a single-story building looming up ahead of him. It seemed to be divided into two halves, each half having a door.
“I wonder who lives here?” he said.
Hezekiah could not read, of course. Had he been able to, he would have seen a notice above each door.
LADIES, one said, and the other GENTS.

Evening's Empires (Quiet War 3) by McAuley, Paul
All That Is Solid Melts into Air by Darragh McKeon
The Balliols by Alec Waugh
I Must Be Dreaming by Seay, S.
With a Twist by Martin, Deirdre
Flight from Hell by Yasmine Galenorn
Spin Out by James Buchanan
The Deceivers by Harold Robbins
Undercover Texas by Robin Perini
Gentleman's Relish by Patrick Gale