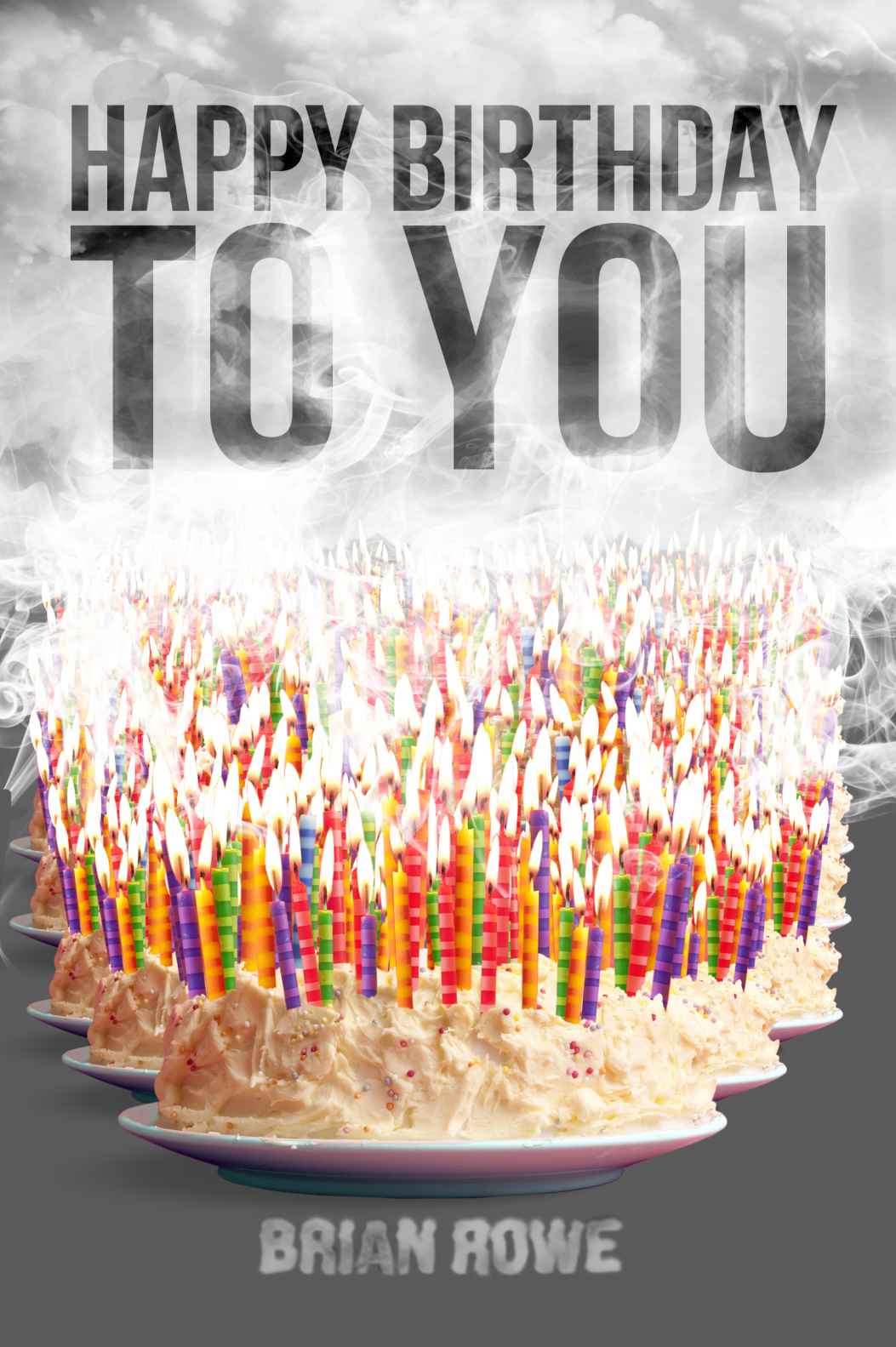 This ebook is
licensed for your personal enjoyment only. This ebook may not be re-sold or
given away to other people. If you would like to share this book with another
person, please purchase an additional copy for each person. If you’re reading
this book and did not purchase it, or it was not purchased for your use only,
then please return it to amazon.com and purchase your own copy. Thank you for
respecting the hard work of this author.

This book is a work of fiction. Any
resemblance to actual persons, living or dead, or actual events is entirely
coincidental. Names, characters, businesses, organizations, places, events, and
incidents either are the product of the author’s imagination or are used
fictitiously.

He awoke from a
nightmare and tried to catch his breath. He stared up at the ceiling, blinked,
then
rubbed his forehead with the palm of his right hand. He
started breathing frantically through his nose, worried that in the final
seconds of his terrifying dream he had screamed out for help: he didn’t need
his Secret Service knocking the door down and tackling him to the floor with
the worry that somebody was trying to hurt him.

He sat up and
stretched his arms out, knowing that he had another packed day ahead. Turning
to his left he noticed that his wife was already up and out of bed, probably
eating a nutritious breakfast in the foyer and perusing through the newspaper.
He was hungrier than normal, given that he hadn’t had a chance to eat a proper
dinner last night. He also needed a giant glass of water, given that his throat
was dry enough to make his occasional tonsillitis flare up again.

But before he
would meet his wife for breakfast on this overcast Saturday morning, he knew
that first there was something very important he had to do.

The President of
the United States really had to pee.

He sat up,
yawned, and glanced at the clock to see that it was a few minutes before 6 A.M.
He slipped his comfy pair of slippers over his aching feet and started making
his way across the bedroom, enjoying this rare moment of silence.

He stepped into
the giant, beige bathroom and closed the door behind him. He had to step past a
sink, a tub, and his wife’s scented candles to get to the toilet. He did his
business and let out a long, satisfying sigh. His urine splashed against the
toilet seat, but he wiped it up with some toilet paper and flushed.

The President
yawned as he put on his silky black robe and headed into the kitchen, where he
poured himself some coffee. Then he made his way into the small foyer, where
his wife, already dressed up for the day, wearing a pink dress to match her
bright lipstick, sat on the right side of the table drinking tea and enjoying a
bowl of granola.

“I told you last
night,” the First Lady said, “I’m headed to New York this morning. For the rest
of the weekend actually.”

“The Women in
Entertainment dinner. I won’t be back until tomorrow morning.”

“Why not until tomorrow?
That’s just a two-hour dinner, is it not? And why were you even invited? I
wouldn’t necessarily call your position in this country a source of
entertainment
.”

“I don’t know,
honey,” the First Lady said. “Oprah invited me. You don’t say no to Oprah.”

The President
didn’t notice that while he had been talking to his wife, a plate of scrambled
eggs, hash browns, and assorted fruit had been laid out in front of him. He
took a giant bite of cantaloupe,
then
slurped down
most of his morning coffee.

“Are you feeling
all right?” the First Lady asked. “You look a little tired.”

“I got three
hours of sleep, maybe four.”

“It did,” the
President said. “I enjoyed that show, though. Down at Misner.”

His wife didn’t
answer him for a few moments. Then she said, “Oh, yes, it was fine.”

“Those young
musicians were excellent. I was impressed.”

“Mmm hmm,” she
said. She took another sip of her tea. “Are you going to be OK without me here
today?”

The President laughed
and leaned in close to her, his mouth full of hash browns. “I think I’ll
manage.”

She smiled and
stood up from the table, grabbing her cell phone and handbag. “I should get
going. Lots to do.”

“You’re telling
me,” he said, and his wife leaned over and kissed him, tenderly, on the lips.

She stood back
up and looked down at her husband, and he saw her smile disappear from her
face. She looked at him for a moment as if his kiss had disgusted her.

“Honey, you
really need to start getting more sleep. Do you have any time to rest this
weekend?”

“Today’s pretty
well packed, a lot of meetings. Sunday’s a round of golf and a birthday dinner
downtown.”

He shrugged. “I
don’t remember.” He brought his hands to his sides and pursed his lips. “So
what are you trying to say, honey? Are you saying I don’t look my best this
morning?”

“I haven’t taken
a shower yet. You’re one upping me already.”

The President
leaned back in his chair and sighed, trying with all his might not to bring his
fists down against the table. “Before I was elected, I had no gray hair. By the
time I leave, I’m gonna look like Santa Claus.”

The First Lady
gave her husband another kiss, this time on the cheek, and just shook her head.
“No. For that to happen, you’d have to get fat. And you better not gain another
pound, mister.”

“Try me.” She winked
at him and started walking out of the room. “I’ll call you later tonight, OK? I
love you.”

The President
looked down at his plate and pushed it forward. He suddenly, though not
inexplicably, didn’t feel hungry anymore. He had a new mission at the moment,
one that didn’t involve his slowly dwindling hunger pains. He stood up, nearly
knocking his chair down, and marched out of the room.

“Mr. President,”
he heard someone from an open doorway whisper to him as he made his way to his
bedroom.

He placed his
hands up in the air and said, “Not now. In a minute.” He knew he had a lot to
get done today, many goals to accomplish. But before he would go any further
with his busy Saturday, he needed to see something for himself.

The President
stepped back into his bedroom, locked the door, and moseyed on over to the
massively large mirror on the right side of the room. He stood there for a few
seconds, checking out his stylish bathrobe, before diverting his attention toward
the mirror. He didn’t look different at all in the face, and for that he was
grateful.

But then he took
a step forward and pressed his fingers against the top of his head. His wife
had been right. While he had been starting to go gray in the last few months,
his hair in the mirror now emulated a fuzzy snowball. His hair had never been
this gray before; in fact, it looked like his hair had doubled in grayness
since he had gone to bed late last night.

Then he looked
down at his bathrobe again, wondering about something else. He knew for sure it
couldn’t be. But he had to see, anyway.

The President
dropped the robe to the ground to reveal his belly. It was flat and toned as
always—no problem there. But there was definitely something different
about his chest hair, which before now had always been as black as the color of
his skin.

His chest hair
had turned gray, too.

My breakfast was
cold, but I didn’t care. I wasn’t hungry. I imagined a lot of people were
waking up this morning not very hungry. I knew Day One would be the easiest and
most painless of all. We had one more day of normalcy. Day Two would be when
people would start noticing. And then the trouble would begin.

“
Cameron
,” my mom said, “
eat
your breakfast. It cost twenty-six dollars a person for
God’s sake. You can eat more than a goddamn fruit cup.”

“Why did we have
to do the buffet again?” I asked, crossing my arms and slinking down in my
uncomfortable chair. “I told you, I wasn’t that hungry.”

“Cam, every time
you don’t eat, your mother and I worry that something new is going on with
you,” my dad said, sprinkling his eggs with salt and pepper. “You know…
aging-wise.”

“Yeah,” my mom
said. “Come to think of it, Liesel hasn’t eaten much either. You both look kind
of miserable. What’s going on?”

I turned to my
right to see Liesel, who faked a smile, pretending like everything was normal.
She shook her head and started scarfing down a maple doughnut, even though I
knew she hated anything fried.

“You ran out of
Kimber’s performance last night,” my mom said, now focusing all of her
attention on Liesel. “That wasn’t
nothing.
Something’s
going on with you two. Something secretive. I don’t like it.”

“Changing the
subject!” my sister Kimber shouted, after tearing through most of her chocolate
chip pancakes. “What did you guys think of my performance last night?”

We all diverted
our attentions to Kimber, who was positively glowing at the end of the table,
maple syrup dripping off her chin. Everyone remained silent, allowing me to say
the following: “You were so amazing up there, Kimber.
Luminous,
even.
You were
perfect
.”

Her cheeks went
red, and I could see for a split second the younger, vulnerable sister I had grown
up with, not the new confident teenager who spent her lunch breaks macking on
random strangers in middle school storage closets.

I smiled at my
sister, and, for a brief, joyous moment, I forgot about everything Liesel had
told me at the fountain last night. I forgot about the fact that, starting
today,
everybody in the world was apparently going to start
rapidly aging a whole year of his or her life with each passing day. Of course
I hadn’t believed it. I knew Liesel, and especially her sister Hannah, had
extraordinary powers, but a spell to put an end to humanity seemed like a
stretch even to me, even after all the unthinkable calamity I’d experienced in
the last fifteen months.

I also forgot,
for a split second, that Liesel was pregnant. It was the kind of news that I
would’ve been delighted to hear in… oh…
ten
years
. And it didn’t help matters that Liesel dumped this major piece of
news on me about ten seconds after telling me that the world was coming to an
end, that is if she and I didn’t find her destructive sister and kill her in
time. I assumed this task to be impossible.
Impossible to
find her.
Impossible to stop her.
Impossible to kill her.
How would it be done? How could my
normal self, and Liesel, whose powers had been stripped of her, compete with
the all-powerful maniacal sister, who was strong enough now to take down the
world?

Yes, I had
forgotten all about these insurmountable problems for a second, watching
Kimber’s face continue to stretch more and more with an infectious smile, as my
mom and dad proceeded to complement her on her wonderful, pitch-perfect playing
from last night, which, delightful news to Kimber, got a healthy round of
applause just for her solo alone.

But those few
seconds faded, and I was brought back to reality by witnessing the
uncomfortable
shouting taking
place directly behind
Kimber, at a large table that was seating at least a dozen people.

“Your booster
seats aren’t big enough!” a woman in her thirties screamed at one of the
waiters. “My daughter can’t fit!”