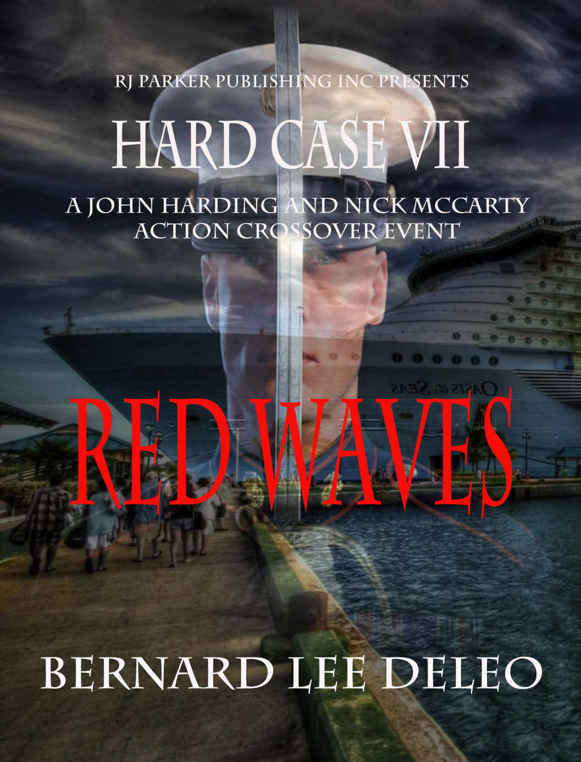 This eBook is licensed for your personal enjoyment only. This eBook may not be resold or given away to other people. Please respect the author’s work. This is a work of fiction. Any resemblance to real life persons, events, or places is purely coincidental.

The unauthorized reproduction or distribution of a copyrighted work is illegal. Criminal copyright infringement, including infringement without monetary gain, is investigated by the FBI and is punishable by fines and federal imprisonment.

As it will be with every novel I write from now until my own End of Days, I dedicate this novel to my deceased angel, wife, and best friend: Joyce Lynn Whitney DeLeo.

The woman walked into the Monte Café, searching the patrons eating breakfast for anyone meeting her boss’s description. A tall lean man in black slacks and pullover gray shirt followed her inside with a bored expression on his face, betraying his attitude toward what they were doing. Frank Richert had told her under no circumstances to approach Nick McCarty, but she and her partner were sick of hearing about the big bad McCarty. They needed a sniper as backup on a mob hit with multiple targets. McCarty needed to help with the hit or else. Kate Fuller smiled at the harried looking man approaching her from behind the food counter. An old couple and two men sitting at the counter were the only other patrons.

“Hi folks, I’m Joe Montenegro. Can I assist you?”

“Do you know Nick McCarty?”

Joe’s face brightened. “Sure. Nick’s a regular. Are you two fans?”

Kate glanced at her partner Sam Jessops with an irritated look. “Yeah Joe, Sam and I are big fans. Do you think he’ll be in any time soon?”

Joe looked at his watch. “He’s usually writing down at the beach about now. Nick loves Otter’s Point along Ocean View Blvd. After he finishes, he usually treks here for a coffee and rye toast. Not many people other than the locals know he comes in here. Do you know Nick personally?”

“We know him through a friend,” Sam Jessops said. “We have a writing gig we’d like to talk over with him. Maybe we’ll drive down to that Otter’s Point. Can you tell us which beach it is?”

The older man sitting with a woman about his age walked over with a smile. “Hi, I’m Dan, a friend of Nick’s. The easiest way is to go over to Asilomar Avenue, turn right, drive down to Ocean View, turn right again and stop at the beach with a rock wall on the left. That’s Otter’s Point.”

“If you do miss him at the Point, leave me your card,” Joe said. “I’ll have him call you when he stops in.”

Kate took out one of many fake business cards she had and handed it to Joe. “We appreciate that very much.”

Outside the Monte Café Jessops made a gesture at the Café entrance, decorated with Christmas lights and decorations. “McCarty should be dead by now with this idiocy writing assassin novels.”

Kate nodded. “When McCarty made it in the publishing world, rejecting Frank’s direct orders not to do it, Frank sent Bill and Jake after his ass, thinking McCarty went over the edge. They were never seen again. McCarty sent Frank their teeth, cut out still in their jaws. I heard McCarty wrote a note telling Frank he’d be doing dental surgery on him next if he sent anyone else. I’m with you. The guy should be dead. He’s not, and Frank specifically told us to wait until McCarty contacted him about the job.”

Sam shrugged. “We can’t wait, Kate. This deal’s going down with very little setup time. If Richert hadn’t sent Jake after McCarty, we could have used him. I agree this guy’s dangerous. Are we still agreed about acing his ass if he won’t do this job?”

“Frank told me McCarty would do it. He was going to tell McCarty one of the targets is Craig Reince. I guess Reince tried to double cross McCarty on a job he worked undercover for Frank having to do with his ‘dark web’ assassin identity.”

“Maybe McCarty should drop this prima-donna crap then and get in line with the rest of us. Richert’s right about McCarty being a danger to other agents in the field,” Jessops said as they got in the front seat of a black GMC Denali.

The dual Taser needles hit the two in the neck as their doors closed. They were rendered unconscious in moments. Fuller and Jessops were injected with hypodermic needles immediately after the initial shocking. The black hooded figure who had worked the Taser guns dragged Fuller to the back of the Denali. He then drove the GMC away.

Fuller and Jessops awoke naked, strapped to gurneys inside a nightmarish room with horrific images revealed by ultra violet lighting. The scene, accompanied by eerie music, evoked a scream of panic from Fuller as she realized her predicament. She shut up quickly, consciousness bleeding into the situational reality with lip tightening tension. Jessops stared at the torture images without sound, knowing it would do no good to plead or speak. He couldn’t help one comment.

“Good Lord, Kate… what a couple of Bambi idiots we are.”

“Nick?” Fuller tried to make her voice sound under control.

A figure approached the two with a slight smile minutes later. “Well hello there. Kate Fuller and Sam Jessops I presume. The only reason you two are still alive is I called Frank. He convinced me this was your dumb-shit move to approach me in Pacific Grove. Frank bought your way out of a torture session to check the info with a name and a hundred grand bonus. I guess he likes you two. I’ve always said you can’t order people in our line of work at an ‘Assassins R’ Us’ store. You and Sam must have skills, Kate. One of the skills unfortunately isn’t survival instinct.”

“It was stupid,” Sam said. “We have to move into position two days from now or miss the opportunity to end this Muslim Brotherhood and MS-13 gangland collaboration. An outsider with the Company named John Harding has an ear on things in the Oakland area East Bay. The meeting’s taking place at an Oakland warehouse. A CIA upper echelon dude named Denny Strobert has Harding, and two other killers in place, but there will be over two dozen guns in attendance. He requested NSA black ops help.”

“Who are all these people and why the hell should I care. I’ll get Craig somewhere on my own dime. I’m not some Snow White with delusions of grandeur. I should cut you two into jigsaw puzzle pieces. Let’s start with you, Kate.” Nick moved closer to Fuller with scalpel in hand. She closed her eyes.

“Wait, Nick! Frank mentioned another name on Harding’s end he said would interest you,” Jessops said. “Didn’t he mention some guy named Lucas Blake to you?”

Nick’s hand holding the scalpel dropped to his side. “No… the prick was too busy bartering for your lives. He should have mentioned Lucas with Reince’s name. Lucas’s shadow, Casey Lambert, must be the other killer. Lucas trained me. Casey and I were Delta. Lucas always claimed he’d make Marines out of us some day if we worked hard.”

Nick chuckled, throwing the scalpel back on the tray. “Okay… I’ll check out the story. If you two are still alive in a couple of hours, stay at the Sea Breeze motel. I’ll meet you at Crabby Jim’s seafood restaurant at the Monterey Fisherman’s Wharf tonight at 6 pm. Do anything stupid and I kill you both on the spot. Understand?”

“Ahhh… that’s so sweet, Kate,” Nick crooned. “You think I don’t know you two would have killed me if I turned the job down. If you wake up in hell, it’s nothing personal… just business.”

“Oh… my… God… Lucas, it’s that candy-ass Nick McCarty we trained back in the day,” Casey Lambert hugged the grinning Nick with feeling. “We heard Denny aligned us with NSA black ops for cover so the suits didn’t throw us under the bus.”

“Casey, you couldn’t train a dog to sit. I had to carry you the whole time through Lucas’s CIA boot camp like a damn tick on a horse’s ass,” McCarty replied. He embraced the smiling stout black man on Casey’s right with vigor. “It is real fine to see you again, Lucas.”

“You, Casey, and Clint Dostiene were the only three sad-sacks I ever trained that might have made decent Recon Marines with a few more years training.” Lucas gripped Nick like a long lost son. “I read all your novels. Good pulp, but a little on the bloody side for my taste, kid. This big bastard here is John Harding. He’s a brother, Nick… a real Recon Marine.”

Nick shook hands with the six and a half foot tall, buzz-cut giant next to Lucas. “Any guy Lucas allows the title Recon Marine into a description for means you’re golden with me, John. Glad to meet you. I heard you have bad business up here in the North.”

John gestured at Kate Fuller and Sam Jessops. “Lucas says you’re family. That means we help without question. Our boss Strobert said you would be in charge of the op. What about those two?”

Nick’s smile disappeared. “I work for an outfit that eats its own. You have my word those two will do what I say or I will shoot them in the head.”

“Good enough. What we have is a bunch of Syrian and Egyptian Muslim Brotherhood types carrying diplomatic credentials working together on a plan to assault the facility at Los Alamos. They’ve guaranteed to the MS-13 Salvadoran gangsters under a mob connected guy named Craig Reince free rein on a Columbian drug supply network being established through tunnels on the Mexican border. They’re beginning operations in the underside of Oakland in the downside warehouse area where I do some business. The info is guaranteed, Nick.”

“Why don’t they let the assholes meet and then bomb the damn place?”

“Did you just insult us, freckle-face?!” Lucas went into drill instructor form two inches away from Nick’s grinning face, poking him in the chest while his amused companions enjoyed the dressing down. “They won’t follow our suggestion to use a drone missile on the place. The pussies won’t allow us to plant explosives and level the building with all the wankers inside either. Now they put a Delta Force sissy in charge of the operation. We might as well shoot ourselves in the head!”

“Sorry Lucas.” Nick put an arm around Lucas’s shoulders. “Here’s my plan so I don’t have to let my two NSA mercenary idiots out of my sight on Christmas. We let the meeting get underway. I’ll take out the guards and cars outside. You, Casey, and John lob in grenades. Then we all move into the interior with M249 machine guns for mop-up after the air clears a bit.”

Harlequin Intrigue, Box Set 2 of 2 by Julie Miller
The Last Girl by Penelope evans
Warlords Rising by Honor Raconteur
Night of the Vampires by Heather Graham
Blackcollar: The Judas Solution by Timothy Zahn
Love Redesigned by Collins, Sloane B.
Leon Uris by Topaz
Beyond Eighteen by Gretchen de la O
The Apple Tree by Daphne Du Maurier
By Jove by Marissa Doyle