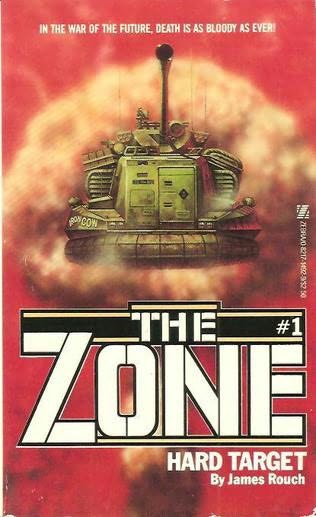 2,480 hp max speed; classified.
Systems fitted include NBC, night vision, automatic fire-suppression, ECM, decoy and smoke generation, passive and active locators.
A planned production of 300 was cut to 60 due to shortage of engines. Issue is limited to Armoured Reconnaissance and Special Anti-tank units. In both roles they have proved highly popular with users, exceptional speed and cross-country performance giving them a survival rate three times that of any other NATO combat vehicle. A major drawback of the type is the difficulty of recovery if battle damage results in total loss of power. Plans for a special transporter were shelved when production was curtailed. 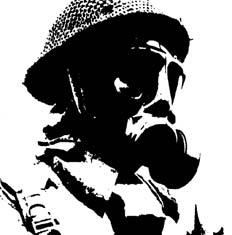 For my parents, John and Marie Rouch

An Imprint Original Publication, 2005
All rights reserved. No part of this publication may be reproduced or transmitted, in any form or by any means, without permission of the publishers.

The characters in this book are the product of the author’s imagination. Any resemblance to living persons is purely coincidental.

Produced under licence from the Author, all rights reserved. Created in Australia by Ian Taylor © 2005

On the eve of the second anniversary of the outbreak of World War III, Russian ground forces have for the fourth time this year used fractional kT nuclear weapons in an attempt to extend the central sector of the War Zone, launching anarmoured thrust towards Frankfurt. First reports indicate six warheads employed; estimated individual kilotonnage between point-one and point-three. NATO forces unable to use nuclear demolition devices to contain attack, due to presence of refugee columns being used by the Communists as cover for their troop movements. A counter strike by elements of the American 3rd Armoured Division and. West German 5th Infantry Division has checked the Warsaw Pact advance at Aschaffenburg. Enemy loses are put at ninety-seven tanks, one hundred and twenty-two other armoured fighting vehicles, including a number of tracked missile systems. NATO casualties not yet confirmed but stated, unofficially, to be acceptable. Heavy fighting continues.

Fighting in the Northern Sector of the Zone remains at a low level for the second week. Intelligence reports suggest that the Warsaw Pact forces are still regrouping and re-equipping after the heavy losses they sustained when they failed to pinch out the British-held Hanover salient, in June.
For the first time since their mutinies on the opening day of the war, East German troops have been identified in the front line, near Wolfsberg in Austria. Their presence in that quiet area is taken as an indication that some elements of the GDR. forces, after the purges, are now being rehabilitated.

Additions to Official approved list of reference sources for expansion or features.

THE WAR ZONE: A SCAR ACROSS EUROPE. Steiner and Blackburn. A good general background. With maps.
PAWNS OF POLITICS. Doder and Doder, N.Y. A study of the refugee problem inside the Zone.
THE THORN THAT SLOWED THE BEAR. New English Library. A crystal clear analysis of the cumulative consequences of the GDR revolt on the first day of the war. Presented in dramatised form. Compiled from official Intelligence reports, and the only coherent work on the subject.
THE U.S. WAR MACHINE
THE SOVIET WAR MACHINE
SOVIET AIR POWER.
Salamander. Lavishly illustrated guides to the principal combatants’ armed forces. Cover strategy as well as hardware. Comprehensive fact files.

The Russian T84 tank was advancing through the last wisps of the yellow chemical fog at a cautious walking pace. Its broad tracks created hardly a ripple in the poisonous ochre puddles on the surface of the narrow road winding between the blighted fields. In turn the long snout of its cannon, and the twin rocket launchers mounted above it, covered a wide arc of ground to either side of its route, as the low dome-shaped turret constantly swivelled back and forth.

Corporal Howard wiped a smear of mud from the field-radar’s display screen and called a reading. ‘Range is two-thousand now, Sarge. He’s hardly moving, still holding the same course. When are we going to clobber him?’

At the far end of the short turf-roofed trench, one of the three men crouched around an improvised card table sat back and took a long hard look at his hand. It was the best Sergeant Hyde had been dealt all morning. His eyes, looking out of a caricature of a face that the plastic surgeons had given up on long ago, flickered once to signal his annoyance at the interruption. None of the other fire-welded components of his features were capable of registering as much. He kept his voice casual, so as not to give anything away to the other players.

‘We’ll give them a bit longer. Give me a shout when it’s down to twelve hundred, or if they change course or speed. Your bid, Libby.’

Unlike the section’s senior NCO, Private Libby had welcomed the interruption, hoping it would terminate the game early. He hated playing poker with Hyde. It wasn’t the man’s ghastly appearance, he’d grown used to that: what he disliked so intensely was the unnatural advantage the sergeant enjoyed in having that expressionless mask.

‘One hundred marks.’ It was reckless, too much when he only held a pair of kings, but sod it, he’d love to out-bluff the bloody monster just this once.

The third player, Private Collins, kept his eyes glued to his cards without really seeing them. All he wanted to do was avoid looking at Hyde. He’d grabbed at the chance when the sergeant had invited him to sit in, it being virtually the first time anyone had spoken to him in the three days since he’d joined the unit, except to shout an order. And now he fumbled with his cards, forgetting the little he knew of the game as he fought to conceal his revulsion at Hyde’s appearance.

More than the, light needed to conduct their game was let in by the crude roof of their shelter. Collins jumped at the sound of an explosion some distance away.

‘Sit still.’ Libby immediately regretted the sharp note of irritation in his voice, as Hyde upped the betting again.

Howard brushed a worm from the top of the set. ‘Just a stray shell, or some poor bugger stepping on a mine. Nothing for you to worry about. You’ll get used to it.’

He glanced at the chemical-level indicator fixed to the wall of the trench. The band of changing colour had edged a fraction further along the strip of sensitised paper. ‘Pity it isn’t all high-explosive. I’m fed up with this stinking chemical shit Ivan keeps chucking about.’

Now the fuzzy red dot working its way down from the top of the green-tinted screen was beginning to pulsate, and pale symbols flashed along the bottom of the grid-marked display. The corporal pursed his lips, turned two of the set’s three dials and with practised ease made quick sense of the numbers that came up.

‘The Ruskies in that tin can out there are using detectors.’ ‘What sort?’ Hyde didn’t bother to look up. ‘Electro-magnetic’
Hyde grunted, and continued to scrutinise his cards.

Collins, on his first active patrol, found it impossible to affect the same casual air as the others. There was none of the tension or drama he’d expected. Nor the state of alertness that his instructors had demanded of him in every exercise during his basic training, and on the demolition course he’d subsequently attended. All that was totally lacking in these combat veterans.

There was another explosion, much closer than the last. The corporal swore, thumped the side of the radar set and swore again.

‘Trigger-happy shits. They’ve clobbered the bloody dish. We’re blind.’ Hyde fanned out his hand to reveal a full house of jacks and queens, pocketed the modest pile of coins and notes and went over to join Howard. ‘Your gadget might be, but I’m not. Move over, I’ll take the bugger on visual.’

He knelt on the compacted soil at the bottom of the excavation and pressed his face against the rubber surround of their periscope sight. Friction peeled a flake of purple scar tissue from his brow. He gradually adjusted the magnification until the stencilled red stars on the tank’s turret stood out clearly, as did the slapped-on illegible slogans on its skirts of side armour.

He lined up the cross hairs of the sight on the front of the tank at the base of its turret. ‘Right, I’ve got him. Transfer control.’ Howard unlooped an extension cable from the back of the radar set and plugged its loose end into the small black box attached to the side of the periscope. A pea-bulb flashed green to signal a good connection and the state of the batteries.

‘It’s all yours, Sarge.’
‘Let’s cook some Commies, then.’
Hyde’s left thumb strayed to the end of the periscope handle and flipped open a hinged yellow cap to reveal a red button set in the shallow recess beneath it. The thumb hovered for a moment, then crushed down.

At the fringe of a copse of defoliated oaks, a hundred yards to the right of the trench, there was a brief stab of flame as a sharp-nosed broad finned rocket jumped from the ground. A moment later, a longer flame spurted from the rear of the anti- tank missile as it accelerated towards its target.

Five seconds into its flight and three-quarters of its journey completed, the missile veered suddenly to the left, lurched back almost on to course, then turned again more sharply and tumbled out of the air. A plume of soil and smoke marked its point of impact.

‘The sods are jamming us. Give me an old-fashioned wire-guided system any day.’ Hyde jabbed his finger at the corporal. ‘You’re the wizard with these bloody gadgets. We’ve got one round left, rig it so those fuckers can’t knock it down.’

While Howard broke a seal to open a small inspection panel on the side of the black box, the sergeant kept tracking the Soviet vehicle.

Already made cautious by the radar location dish they had detected and destroyed, and now alarmed by the abortive attack, the crew of the T84 played safe, and rather than use the tank’s exceptional high speed to escape, drove it into cover. Amid a cloud of grey exhaust from its V12 diesel, it backed through the remains of a hedge and took up a position among the gaunt soot-stained walls of what had once been a half-timbered barn.

Twice in swift succession, white fire tipped the snout of its cannon and balls of flame roared through the naked oaks, starting blazes among the heaped brown leaves and peeling trunks.

‘That should do it.’ Howard moved out of Hyde’s way. ‘It’ll take faster reflexes and better electronic counter-measures than that Commie crew has got, to stop the next one.’

Bayou Wolf by Heather Long
Fever-epub by Cathryn Fox
The Lucky Years: How to Thrive in the Brave New World of Health by David B. Agus
The Zygan Emprise: Renegade Paladins and Abyssal Redemption by YS Pascal
The Woman Who Wasn’t There by Robin Gaby Fisher, Angelo J. Guglielmo, Jr.
The Right To Sing the Blues by John Lutz
Trouble in a Fur Coat (The Fur Coat Society Book 1) by Sloane Meyers
Too Near the Fire by Lindsay McKenna
Naughty or Nice by Eric Jerome Dickey
So sure of death by Dana Stabenow