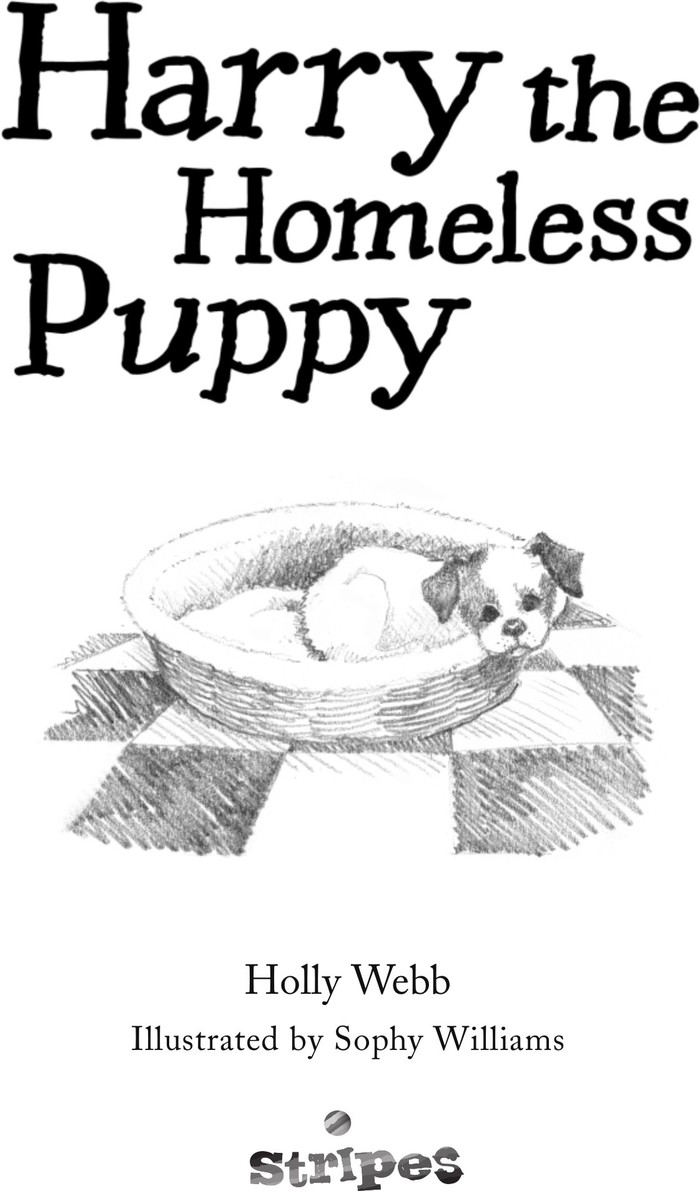 For Robin and William

Other titles by Holly Webb: 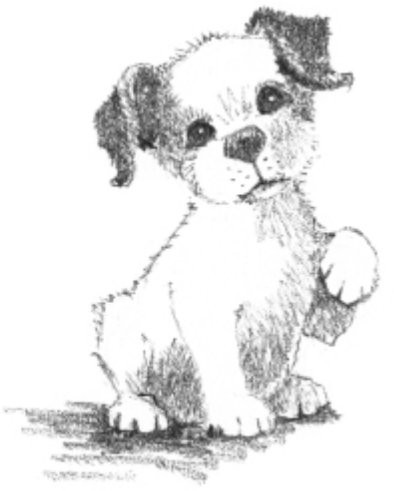 “Beth, we need to go now,” her dad told her gently. They didn’t have much time before they needed to leave for the airport.

Beth didn’t answer. She just stroked Harry’s soft white head and
chestnut-brown
ears. She couldn’t stop the tears dripping down her cheeks. The puppy jumped up, placing his paws on her
shoulder, and licked them away. “Oh, Harry, I’m going to miss you so much. I don’t want to say goodbye,” she whispered.

Her voice was so sad that Harry’s curly tail stopped wagging. What was Beth talking about? It didn’t sound good. He hoped they could leave this place soon. It was too noisy, and it smelled odd. There seemed to be lots of other dogs here, he could hear them barking and growling and whimpering. He wanted to go back to his nice home.

“Here’s his basket, and his toys,” Beth’s mother said, putting them into the pen. “I’m sorry but we really do need to go, Beth; we have to set off for the airport soon. It’s going to be so exciting, isn’t it?”

Harry watched his basket, his favourite red rubber bone and squeaky fish being put into the wire cage. Beth squeaked the fish for him a couple of times, then rubbed her hand across her eyes. Harry gave a puzzled whine, looking up at Beth with his big, brown eyes. What was going on? 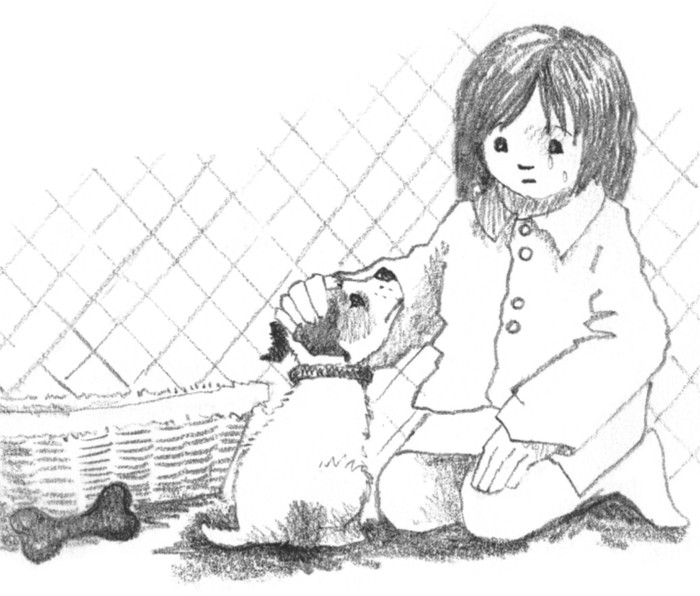 “Oh, Mum, he knows something bad is happening,” Beth said, as she got to her feet.

“Don’t worry,” the girl from the shelter said gently. She was called Sally and she seemed nice, but Beth wished she’d never had to meet her. “He’ll find a lovely home really soon, I’m sure. He’s such a sweet little dog. Puppies are always easy to rehome, and Jack Russells are a popular breed.”

Beth nodded, wiping her tears away with her sleeve. She supposed she ought to be glad about that – she certainly didn’t want Harry to be here at the shelter for ages, all miserable in a little run. But she didn’t want anyone else to have him either! He was hers.

She’d only had him for two months,
when her dad broke the news to her that his company was sending him to America for three years. At first it had seemed so exciting, going to live in New York, but almost at once she’d thought of Harry. Would he like it there?

And then Dad had said he couldn’t come. That it would be too difficult with quarantine, and they would be living in a city flat that wouldn’t be suitable for a dog. Harry had to stay behind, and since they had no one to leave him with, he had to go to the shelter – a home for unwanted dogs. Which didn’t seem fair, because Beth did want him, very much.

“We’ll write to you, to let you know when Harry’s settled with a new owner,” Sally promised. “Really soon. I know he’s going to find a lovely home.”

Beth wanted to shout out that he had a lovely home, but she nodded, and her dad led her out, which was good, because she was crying so much she couldn’t see.

Harry whimpered, calling after her and scrabbling at the wire door. Beth was crying! There was something wrong, and she was going away from him. He howled for two hours, and then he was so exhausted he fell asleep.

When he woke up, she still hadn’t come back.

“Oh, just look at this one,” Grace said longingly. “A Labrador. Isn’t she gorgeous?”

Mum smiled at her. “We haven’t the room, Grace, you know that. Even though she is beautiful. Lovely eyes.”

“Maybe a small dog, like a Jack Russell, then!” Grace started frantically scanning through the shelter website to see if they had any smaller dogs. “They’re those cute little terrier dogs that used to hunt rats. They’re really clever. And small! We’ve got room for one of those, definitely.” Grace looked hopeful.

“No, we haven’t. And you’ll need to get off the computer soon, Gracie, I have to get on to the estate agent’s website again, and see if any more flats have come up.” The Winters were looking to move at the moment, as there just wasn’t enough room for them
all in their current flat, especially now Grace and her brother Danny were getting older.

“It’s no use, Gracie.” Danny sighed, as he squeezed behind the computer chair to go and make some more toast. The computer was squashed into one corner of the kitchen. “I’ve been trying to convince Mum and Dad to get a dog for years.”

Mum frowned at him. “Don’t you start, Danny. You both know we just haven’t got the space. It’s not fair to shut a dog up in a flat, even a little one. If we had a garden flat, maybe. But not on the seventh floor!”

Grace nodded. She knew it really, but every so often she managed to convince herself it wasn’t true, just for a
minute. She went back to stirring her cereal, imagining running through the park with a gorgeous black Labrador or a bouncy little brown and white Jack Russell scampering beside her. If they were moving anyway… Was it too much to hope for a flat with a garden? She licked her spoon dreamily.

“Don’t get rice pops on the keyboard, Grace!” Mum warned.

“Hey!” Danny had paused behind Grace’s chair with his plate of toast, and was leaning over her shoulder. “Gracie, look! Mum, come and see!”

“I’m never going to get on to my computer,” Mum muttered, coming over to look at the screen. “Fairview Animal Rescue Shelter. You’re still on the dogs’ home website? Danny, haven’t
we all just agreed we can’t have a dog?”

“Yes, but look. Our Fantastic Volunteers! People who help at the shelter.” He grabbed the mouse and clicked on the link. “Look, they get to walk the dogs!” Danny beamed at Grace. “We could do that, couldn’t we? I know we can’t have our own dog, but we could borrow some. It would be like having lots of dogs!”

Grace practically pushed her nose up against the screen. There was a big photo of a hopeful-looking dog, with a lead in its mouth. Bonnie, she was called, apparently. “Could we do it, Mum?” she asked eagerly. “The shelter’s not far from here. Only a couple of streets away, on the other side of Fairview Park.”

“Sounds like a good idea to me.” Dad had walked in, and was staring at the computer now, too. “Anything that gets you out in the fresh air and not watching TV is good news. Does it say when they’re open? I’ll take you over there later, if you like.” 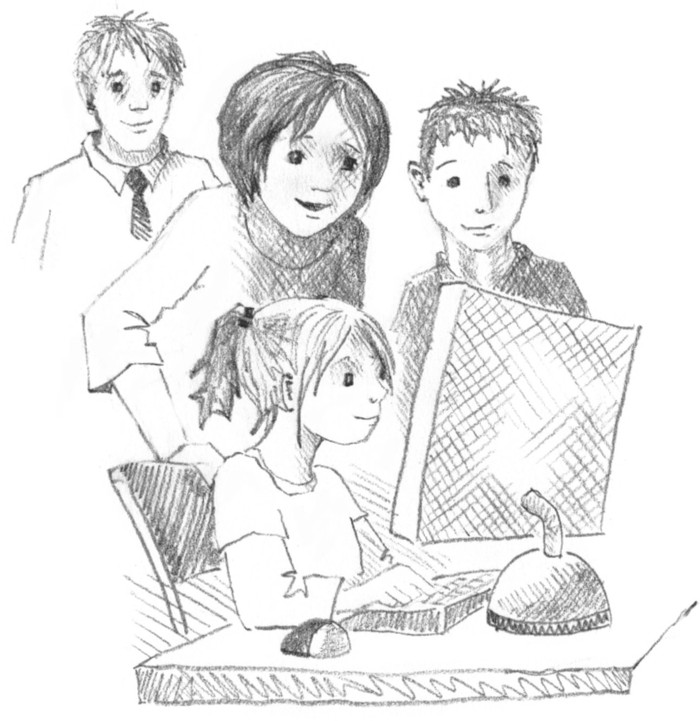 Grace smiled up at Dad delightedly. “You really mean it?” she breathed. She hadn’t really expected to be allowed a dog, and this was much, much better than nothing!

Harry was lying in his basket, with his nose shoved firmly into his blue cushion. It smelled like Beth’s house – his house – and it shut out the smells of other dogs. He couldn’t understand why Beth had left him here, and why she hadn’t come back. Beth had brushed him and fed him and loved him. She
had run into the house to find him and play with him as soon as she got home from school. What had gone wrong? He hadn’t been naughty, he was sure.

He could still hear the other dogs barking and whining, however hard he tried to bury his head in the cushion. But then he heard the sound of footsteps. Slowly, he crept out of his basket, and went to peer through the wire door of the pen. Maybe Beth was coming back? She might even be waiting for him out there! He sprang up against the wire hopefully, and from further up the corridor Sally turned round to look at him. 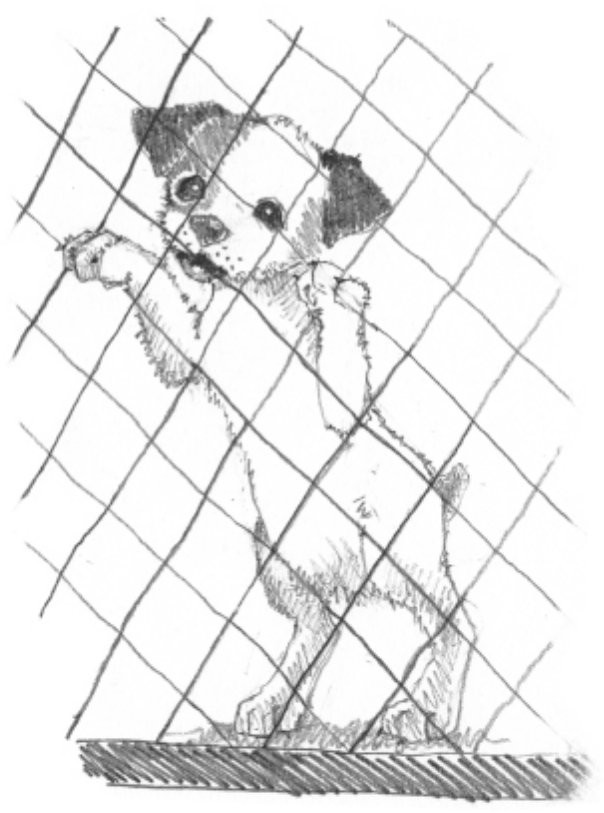 “Hey, Harry…” she said very gently. “You decided to come and see what’s going on, did you?”

Harry’s ears went back, and his tail sagged again. Beth wasn’t there. Just that woman who smelled of other dogs. He slunk back to his basket, and Sally sighed. She hoped Harry wasn’t going to have a really hard time.

Harry thought miserably about home. It felt like the sort of time he’d normally be curling up at the end of Beth’s bed. His basket was usually only for daytime naps; he always slept with Beth. She’d probably have given him one of his favourite biscuit bones, too. He sighed, and snuffled sadly. She would come back, wouldn’t she?