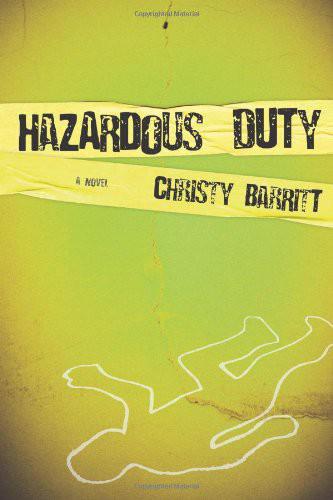 This
ebook is licensed for your personal enjoyment only. This ebook may not be
re-sold or given away to other people. Thank you for respecting the hard work
of this author
.

The persons and events portrayed in
this work are the creation of the author, and any resemblance to persons living
or dead is purely coincidental.

Other Books by Christy
Barritt

The Trouble with Perfect

The Novel in Me: The
Beginner’s Guide to Writing and Publishing a Novel

To
book is dedicated to the newest guy in my life:

Whistling a tune from Fiddler
on the Roof, I used my tweezers to work a piece of Gloria Cunningham’s skull
out of the sky blue wall.

With a couple of tugs, the fragment
broke loose. Holding it to the light, I studied the sliver that was once a part
of a living and breathing woman. It wasn’t much bigger than a splinter and to
the average person would look like a piece of chipped tile.

One thing was for sure, being a rich man
definitely hadn’t done this family any favors.

“Sorry, Tevye, but you were wrong on
that one,” I mumbled.

As I worked the rest of the wall, I
tried to come up with jingles for my company.

If
your home is bloody

Stumped for something that rhymed with
“bloody,” I hummed “If I were a Rich Man” and played with my options.

If
your carpet’s gory

It was my new business strategy—to
save enough money to buy advertising on the radio. Ever since I came up with
the idea, I’d been playing with different tunes, trying to develop the perfect
one. It was amazing how many people didn’t know about my services as a
crime-scene cleaner.

Yeah, that’s me. A crime-scene cleaner.
Bonded and insured. Proud owner of my own business. A fascinating anomaly to
those I meet around town.

People waiting in line behind me who
strike up conversations always regret it.

“So, what do you do for a living?” the
innocent bystander asks, desperate to pass time until it’s her turn to be rung
up.

“I mop up blood at crime scenes.”

The color suddenly drains from her face.
I might as well say I’m a vampire. Is there something that strange about a girl
who cleans up blood for a living? I think not.

I glanced back at the wall. Fractures of
bone jutted from the plaster in a spray. It looked like a mosaic gone terribly
wrong.

I shook my head and continued to work.
Drowning in my blue biohazard suit, a face mask, and gloves that were duct
taped to my sleeves, I looked like a space man, at best; a Telletubby at worst.
Whoever designed the suits obviously thought nothing about the importance of
flattering a woman’s figure.

I guess they were too busy worrying
about keeping people safe from diseases like AIDS and hepatitis, which could
live in blood for up to a week.

I straightened as inspiration hit me. I
pulled imaginary pom-poms to my waist and took a cheering stance.

“When blood is there

I used my best valley girl voice and
bounced like a cheerleader—something I had never desired to be. I was always
the scientist in high school, which didn’t help me win any popularity contests.
I might as well have joined the Chess Club.

It also didn’t help that as a child,
while all my friends dressed up their dolls, I dissected mine. I wanted to know
how the human body worked. Later in life, I developed a fascination with
chemicals, which Company 12 of the Norfolk,
Virginia Fire Department can
attest to.

Even then it wasn’t my fault. Yes, the
fumes that resulted from the chemicals I mixed were deadly. Yes, the teacher
meant well when he tackled me to save my life. Still, the spill and the
resulting fire were all his fault. Keep your head in a crisis, that’s what I
say.

So much for impressing my lab partner,
Bartholomew Einstein.

Yes, that was his real name. I’ve never
particularly had good taste in guys. I’d moved between nerds and jerks so
seamlessly that they should create a Twelve Step Program just to save me. As of
late, there hadn’t been anyone. It might have had something to do with the
scent of blood that tends to saturate me after cleaning.

“Is that a new perfume you’re
wearing?” the debonair gentleman asks, raising my wrist to his nose.

I raise my head eloquently, pursing
my lips in imitation of movie stars of late. “Why no, it’s not. I don’t wear
perfume.”

The handsome stranger forces his
eyebrows together. “Then what is that smell exuding from you?”

I bat my eyelashes and level with
him, “That, my dear, is blood. You think it smells bad? You should be around a
human body that’s been decaying for two weeks.”

You had to have a sense of humor to do a
job like this. A lot of coffee and chocolate also helped—as did having a
personal counselor, a.k.a. my neighbor and best friend Sierra. Boy, she had no
idea what she was getting into when she invited me over for coffee the first
time. But since I live on the floor above her, she’s stuck with me.

Abandoning my workstation, I crossed the
room to the built-in bookcase of the master bedroom. Against protocol, I picked
up a picture displaying a happy couple, smiling on a white sand beach with the
sunset smeared behind them. The woman was blond and beautiful, the man stocky
and masculine.

They both looked so young, only a few
years older than my twenty-seven years. They still had so much of life to share
together. The husband, Michael Cunningham, was even running for senate, hoping
to represent this wonderful state of Virginia.
I wondered what he would do about his campaign without his trophy wife.

A gloved hand snatched the picture. I
gasped and whirled around.

He pulled his mask up and revealed his
aged round face. “What are you doing?” His deep voice resonated in the room. He
reminded me of the man who sang Old Man River in Showboat.

One glance at Harold’s disapproving
glare and I knew not to argue.

“I know. I just needed a break from
cleaning.” I pulled up my mask and a red curl bounced down over my eye. I let
it droop rather than touch it with my gloved hands. “How are things going on
the stairway?”

Harold didn’t know about the hours of
research I poured into my job, trying to learn background details of the case.
I wanted to know the victims. I wanted to theorize who could be the killer.
Basically, I wanted to be a crime scene investigator. But without a degree I
was forced to do everything in an unofficial capacity.

“I pulled up the carpet. The owner will
have to replace it. There’s just no way to get all of that blood up. It went
into the padding and sub-flooring.”

I glanced around the bedroom. “Whoever
did this was a monster.”

“And my mom always told me they didn’t
exist.”

“Well, they do, and this one left us a
heap of a mess to clean up. This is more than a one day job.” I leaned closer
to Harold. Moisture covered his face. “You need a break?”

“Don’t push yourself too hard. I
understand how tough this is.”

Yeah, like Harold would let a girl young
enough to be his granddaughter outlast him on a job. The man did have pride.
His gaze darted across the room. “What happened in here?”

I drew in a deep breath.

“Gloria Cunningham was about to testify
against a suspect in an armed robbery trial. The perp . . . er,
suspect threatened her, saying if she went to court he’d kill her. Two days
before the trial, he broke into her home while she was sleeping.” I spread my
arm to show the room. It told the story better than words.

The crime scene had remained active for
a week. I heard about the case on the news and slipped over to the house to
leave a business card. As soon as the police okayed it, Michael Cunningham’s
mother had called me to see if I could clean things up before her son was
released from the hospital. He’d been shot in the leg while trying to save his
wife.

A lot of people thought I worked for the
police department, but I didn’t. I was an independent contractor. The police
weren’t allowed to recommend services to anyone—not for anything, from a tow
truck to a cleaner. So I spent a lot of my days getting to know embalmers and
body snatchers, my nickname for those who took the dead bodies to the morgue.

To get business I watched the news. I
followed leads by placing my card at crime scenes. As the only crime-scene
cleaner in the area, I had almost 100% success.

But drumming up business took a lot of
time, which is why I’d been daydreaming about a radio spot that advertised my
business. It would save me a lot of legwork.

I could hear Harry Connick Jr. singing
it now… no, better yet, Julie Andrews. I closed my eyes as a melody that
sounded vaguely reminiscent of “Santa Claus Is Coming to Town” came to mind.

If
you’ve been shot

If
you’ve been stabbed

If
blood on your walls says, “Someone’s been bad.”

Trauma
Care is the-e-ere for you

I quit writing advertising jingle and
noticed Harold staring at me like I needed to go to the psych ward. “Well, it’s
back to work for us.” Sincerely hoping I hadn’t been humming a Christmas carol
out loud, I turned back to my modern art brain splatters.

It took me four hours to clean up the
walls of the bedroom. What a bullet did to a human brain just didn’t bear
thinking about.

Harold finished the stairway and then
cleaned the broken glass downstairs where the intruder had entered the house.
With that done, he came to help me in the bedroom.

The blood-splattered coverlet had to be
thrown away, as well as the sheets. We shoved them into special hazmat
containers that I’d take to the hospital to be disposed of properly. Most of
the carpet would have to be taken up in the bedroom also.

I’d call Michael Cunningham’s mother and
see if she wanted us to subcontract the work out and have it replaced before
her son returned home. Most people didn’t want to be reminded of what had
happened in their once safe home. In fact, most people ended up selling their
house after a crime because the memories were too vivid.

At 7:30, Harold tapped my shoulder and
pointed to his watch. “Grandson? Baseball game? Okay if I get going?”

Had we really been here ten hours?
“Sure. I can finish. Come back in the morning. Eight o’clock.”

He didn’t move. His brow furrowed as he
stood in the doorway.

The Druid's Spear (Ascent of the Gem Bearers Book 1) by Payne, Parker, Thornton III, Lee
13 Nights of Horror: The Disappearance of Rose Hillard by Amy Cross
Big Tex by Alexis Lauren
Masks by Laurie Halse Anderson
When I Lie With You by Sandi Lynn
Indefensible by Lee Goodman
MM03 - Saturday Mornings by Peggy Webb
The Mamur Zapt and the Spoils of Egypt by Michael Pearce
Brown Eyed Girl by Leger, Lori
Lust Thy Neighbor by Emily Snow