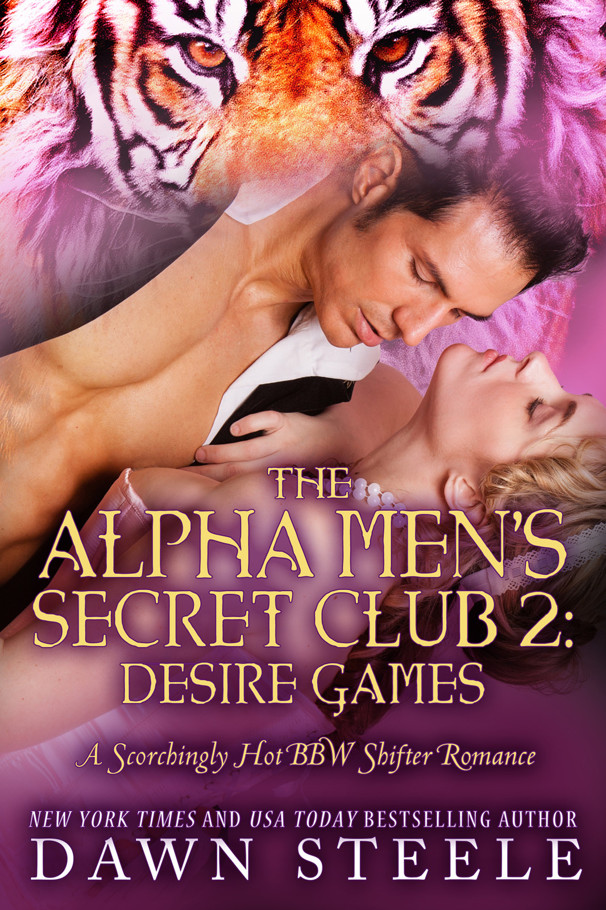 This
book is a work of fiction. Names, characters, places and incidents are the
product of the author’s imagination or are used fictitiously. Any resemblance
to actual events, locales or persons, living or dead, is coincidental.

Dawn Steele/Aphrodite Hunt is a New York Times and USA
Today bestselling author. Her stories have been in the Top 5 of the Amazon
overall bestselling charts, the 10 of the Barnes and Nobles overall charts and
the No. 1 spot in Amazon's Movers and Shakers. She is a Top 50 Amazon Most
Popular author.
She has had no less than 41 stories hit Amazon's Top 100 Erotica/New
Adult/Paranormal Romance charts and two which have hit the Top 2. 18 of them
have hit the Top 100 Barnes and Nobles bestseller charts.

This mailing list will be for all
three pen names: Dawn Steele, Aphrodite Hunt and Artemis Hunt. I’ll only update
you on a new romance (and all its subgenres) release, and not erotica for fear
of offending some sensibilities. Erotica updates will be on Aphrodite Hunt’s
blog only.

Does he feel anything for me?

Does he not feel anything for
me?

Kate stared at the flowing river
from the embankment, letting the wind sweep up her long dark hair. It was
cloudy today, and the trees were rustling in the wind, throwing off dead leaves
for the cleaners to pick up. Barges floated in the water below, the people on
them oblivious to her plight.

She had his body, but she didn’t
have his heart.

After a month of torrid sex
almost every day in secret places – the club, his office, motel rooms,
anywhere he could get her away from prying eyes – she had been more
satisfied sexually than she had ever dreamed a woman could be.

The sex was frenetic, intense,
mind-blowing. Her orgasm threshold was on a permanent nadir – so low that
she was almost always spontaneously combusting. All it took from him to get her
going was just a look.

Just one look, and she would wet
her panties.

If she was actually wearing them.

What did she want now? Were not
all her orifices filled and expanded and pounded regularly into molten submission?
Was not her pussy perennially sore from so much stimulation that she could
hardly stand, let alone walk? Did her juices not flow copiously every day so
that she wore an almost permanent stain on her inner thighs?

But now . . . she wanted
something more.

That was all she was to him, she
was certain. A body. A body he seemed to desire and crave just as much as she
desired and craved him.

She was his mistress. His sexual
partner in submission and bondage.

But she wanted more. More!

Was she unusual in wanting more?
Could he see the love in her eyes as she gazed upon him – a love she did
not dare betray too much lest he dump her without so much as another word?

The only way I can still have
him is to keep the status quo.

Until he tires of me.

Her heart wrenched in her chest.
She could feel the physical pain of it turning uncomfortably, of her heart
strings being tugged by her psyche.

But she did not dare challenge
what was between them. What if she tried for something more, and it backfired
miserably? What if he threw her out on the street and asked her never to see
him again?

She felt like throwing herself
into the water and sinking to the bottom of the river, letting it cover the top
of her head. That way, it would be peaceful. There would be absolute calm. They
would find her body the next morning, and
he
would be sorry he hadn’t
loved her
more
. . . hadn’t wanted more from her.

He would be sorry for a twinge of
a second.

She laughed. She couldn’t help
herself. Look at her! She was a basket case, pining over the love of a man no
one could have!

At least she had him. At least
she had his body. His rock hard body and his thick, long, erect cock.

That day on the embankment,
contemplating wild thoughts of love and unrest, Kate had no idea how much her
life was going to change.

The trouble with Kate was that
she wasn’t completely comfortable with herself.

Imagine! She was eating ice-cream
and all sorts of fattening things to keep her weight up! Was she the only girl
in the world to do that?

She filed through the corridors
to the library. She had an assignment due. Sometimes, she threw herself into
her studies so that she wouldn’t think about Rust O’Brien all the time. Besides,
she wanted to impress him in class.

I’m not just an overweight
fuck doll, you know. I have a brain
.

Oh no. It was her best friend and
roommate, Michaela. Kate had been having a devil of a time keeping her affair
with Rust O’ Brien under wraps, especially since she sometimes stayed out all
night.

Michaela loped up, beaming, her
laptop clutched in her big arm.

“Girl, I swear you’ve been trying
to avoid me.”

“That’s true.” Michaela linked
her other arm around Kate’s and together they walked to the library. “I know
you’ve been holding out of me and I know I have no right to ask you to tell me
anything you don’t want to, but damn, girl, I miss you!”

Other people passing them gave
them amused stares. And why not? Michaela was a humungous big black girl with
her arm linked with another big, albeit far smaller, white girl.

“What do you mean?” Kate
demanded, although she knew exactly what Michaela meant. She had been there . .
. but not there.

“I mean us talking. We used to
talk all the time.”

“Yeah, but you won’t tell me who
you’ve been seeing.”

“I’m not seeing anybody.” Kate
squirmed. She had always been bad at lying. But it was one of his rules of
engagement.
If you want this tryst between us, tell no one. Not your best
friend. Not your sister. Not your mother. And not even your shadow.

“OK, but I made a promise not to
tell anyone about it. Please, Michaela, I love you, but I did promise. Please!”

“OK, but you have got to tell me
one day.” She spun Kate around and bored her brown eyes into Kate’s orbs.
“You’re different, and I’m worried about you. Whoever this guy is, he’s not
good for you. You’re too quiet these days. What’s the word for it? Pensive.
Like you’ve permanently lost your dog.”

“You are. You don’t notice things
like these, but I do. You’re mooning around sometimes like you want to kill
yourself, and other times, you’re just like a kid with candy at Halloween.
These mood swings are worrying me, girl. You’re losing weight.”

Michaela started to laugh. “Look
at yourself. I’ll bet a month ago you would have given anything to lose weight.
And right now, you should just see the look on your face. It’s like hell just
froze over.”

Michaela was right. She was a
mess.

“Girl, if you’ve got a problem, I
want you to tell me about it, OK?” Michaela turned serious. “There’s no use you
pining and not doing something about it. Whatever it is – drugs,
pregnancy, a guy who’s been cheating on you – you tell me about it and
I’ll fix it. You hear? That’s what my Mama always said. If you have a problem,
you tell someone who can fix it. My Mama always fixed things, and I inherited
that from her.”

Kate nodded. “I promise, I will.
But I’m not in trouble.”

Michaela gave her a fierce bear
hug, and then together, they walked into the library, the best of friends.

Because that was the least of
Kate’s problems.

That day – after she had
seduced Rust O’Brien in his office for the second time after their tryst in the
Alpha Men’s Club – he asked her:

“Do you want to continue this?”

Her heart leaped. She didn’t even
hesitate or play hard to get. After all, she was the seducer.

“You have any conditions that
would contraindicate you to be on the pill?”

“Great.” He zipped up his pants.
His face was flushed and his expression was that of a very satisfied cat. A
huge, striped, furry cat.

She was pleased – though
she would never say so to him – that she had given him so much pleasure
that he asked her if she wanted to continue.

“Why do you ask . . . sir?” she
said. She still wasn’t sure what to call him. ‘The Perfesser’ seemed too
perfunctory.

He did not contradict her, or ask
her to call him ‘Rust’. He stood up.

“I like fucking without condoms,”
he said. “If you would be exclusive to me, that wouldn’t be a problem, right?”

Exclusive to him? The thought
thrilled her.

Wow. She couldn’t believe she
said that. But she was on a high after the sex.

He stared at her for a long, long
time. His expression was one of amusement.

He said gently, “Trust me, Kate,
when you are exclusive to me, none of that will happen.”

None of what would happen? she
wondered. That he would catch something and pass it on to her? Or that he would
wear a condom when he was fucking someone else and then do it bare with her? Or
that he would be exclusive to her?

So many questions! He was turning
her topsy-turvy again.

He said, “Do you have a
gynecologist you go to?”

“Yes,” she lied. She had never
gone to a gynecologist in her entire life. She didn’t have the money.

“Because I can recommend one if
you don’t.”

She nodded as she swallowed the
lump in her throat.

So long as I get to have you and
keep on having you.

It was a psychological game. If
she went on the pill, she convinced herself, he would still be with her because
he would be convinced she was exclusive to him . . . and he would get to fuck
her without a condom.

One month. All it took was one
month of being on the pill . . . and then he could do it bare without the risk
of pregnancy.

She was at that impasse now.

She looked down at the oblong
pillbox of oral contraceptives.

The one month had passed. Now
they would move to the next level.

She wondered what he had in store
for her.

Or maybe he should wonder what
she had in store for
him
.

My Chemical Mountain by Corina Vacco
Shaman by Maya Kaathryn Bohnhoff
Heart of the City by Ariel Sabar
Servant of the Gods by Valerie Douglas
Susan Spencer Paul - [Enchanter 01] by Touch of Night
Bear Shifters: Hunt Collection #2 by Ava Hunt
The Devil in Amber by Mark Gatiss
The Perfect Blend by Rogers, Donna Marie
The Drazen World: The Lesson (Kindle Worlds Novella) by Milana Raziel
Red Sand by Cray, Ronan