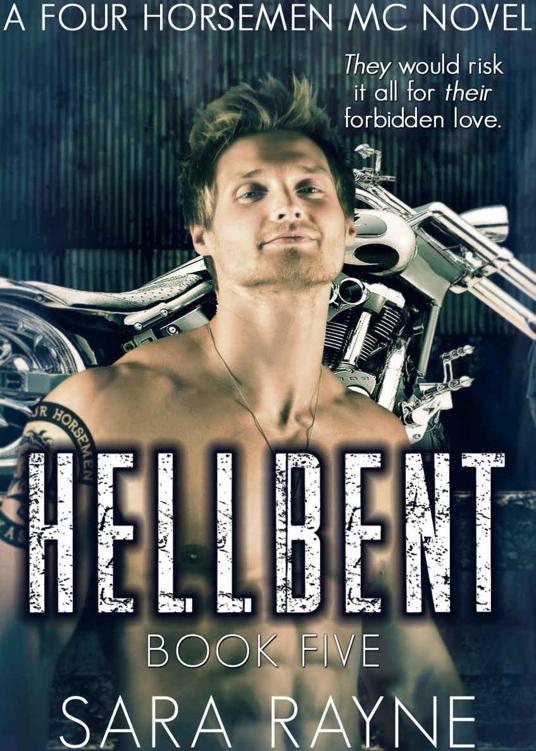 Books in the Series

If you enjoy the series, please visit Cynthia Rayne’s
website
to sign up for the
new release newsletter
. I will only
email you when there is a new book in the series coming out. There will be some exciting free reads set in the Four Horsemen universe coming soon!

Books in the Series

Your brother's back. Watch it. Have it.

The first time Shep laid eyes on Pretty Boy, he was covered in blood and fury. He'd been beat to hell and back. Now, more than five years later, Pretty Boy stood in a dirty basement, squared off against a guy roughly the size of a fridge—looking a helluva lot less bloody, but just as pissed off.

Pissed off looked good on him.

From the mean-ass glint in his sharp green eyes, to the careless flick of black hair falling down his pointed cheekbones, Pretty Boy had earned his road name.

Not that Shep would ever admit he gave a damn how the guy looked.  But just now, he couldn't take his eyes off him.

Pretty Boy balanced on the balls of his bare feet on the gritty concrete, dingy fluorescents flickering across the crowd circling the fighters. The silver thumb ring he always wore caught the lights, flashing in Shep's eyes. They were stripped down to boxer briefs, naked fists and gnashing teeth. This underground fight was no gentlemen's match. No hits were too dirty; no refs required. Money passed through bookies built like bouncers.

Pretty Boy slapped an open palm across his bare chest and waved his opponent on, all
come at me, bro
swagger. And the huge-ass, dock-working dipshit stupid enough to square off against him took the bait. He barreled forward like a runaway freight train and nearly bulldozed over a member of the crowd when Pretty Boy bobbed and weaved right around him. He landed a kick in the middle of Dockworker's back that sent the guy sprawling to the floor, teeth chipping on the floor and blood dripping down his chin.

He recovered quicker than a heavy fucker like that should have been able to, rounding on Pretty Boy with a meaty fist to the jaw. Pretty Boy took the hit like a pro, swaying, but keeping his feet. The next one snapped his head to the side, the sound echoing over the cheering crowd.

Shep bit back a growl, shoulders hunched into his cut like it could stop him from seeing this fight happen. He wished it could.

Pretty Boy recovered, the sneer on his face stretching into a grin. He jerked his chin, daring his opponent to hit him again and seeming to shudder with satisfaction when he did. He cracked his neck, rolled his shoulders, and Shep could see the crazy flare in his eyes.  Pain had a way of lighting Pretty Boy up like it was his religion. That supplicant fervor crackled around him. Pretty Boy was all in now, genuflecting at the altar of bruises and broken bones.

With a vicious swear, Shep forced his gaze away. He grabbed the flask from his inside pocket and let the whiskey burn the blasphemy from his lips.  Pretty Boy was a lot like the Jack tucked in Shep's jacket, all distilled damnation in too shiny a package. Especially in the middle of a fight.

Shep had to look, couldn’t stand the sounds of flesh hitting flesh without knowing what was happening.

Pretty Boy moved like a force of nature, landing a bone-cracking kick to the ribs with cyclonic speed. The other guy curved in protective posture and Pretty Boy came at him with a vicious uppercut to the chin that snapped his head back. Pretty Boy turned again, and brought his elbow right into the guy's nose. Blood spattered across the crowd. Dockworker's eye swelled, a mixture of bloody drool and teeth sliding down his chin as his bottom lip split. Pretty Boy spun into a roundhouse kick to the jaw, sending the guy to the floor hard enough to shake the dusty rafters above.

Pretty Boy looked up, eyes scanning the roaring crowd. He raised his hands over his head in victory, soaking in his audience's adulation. His bowlegged fighter swagger, shoulders spread, chest out, fists clenched and all amped up from the ring drew another chorus of appreciative cheers from the crowd. He was loving this, feeding off this, Shep could see it all over his smirking face.

They had a past.

And the tug in his gut every time Pretty Boy walked into a room? It was just the memory of what they’d been through back then. Nothing else. He could
almost
make himself believe it.

Shep had been on a pastor's path when he met Pretty Boy. Of course, back then, he wasn't Pretty Boy, he was Noah Blake. And Shep had known Noah was his own personal ticket to hell the moment he wiped the blood and grime off his angular face. Had known he should turn and walk out the second their eyes met.

But he hadn't been able to then. Just like he wasn't able to now.

He clocked Noah pocketing his winnings from a thug in the back and shadowed him out the loading dock doors.

The bouncer that'd let him in the front door snagged him by the elbow before he could make a clean getaway. "You find what you were looking for?"

"Mm-hmm." The guy crossed his arms and gave Shep a look. "Look, you Horsemen want a piece of the action, I’ll talk to Benny about cutting you in. It'll keep that Raptor trash out of here—that's worth the price of admission to me."

Shep nodded and tried to look like he gave two shits at the moment. He'd used the cover of club business to get in the door but hadn't counted on it hanging up his exit.

"But don't go trying to grab my prize fighter, got it?" The guy jerked his head towards the direction Noah had vacated in.

"Yeah, that kid's cleared me a couple grand large in the last month. And I plan on keeping him, so don't get any ideas." He poked Shep in the chest with an insolent finger.

Shep fought the urge to wipe that smug look off the guy's mug and replace it with his tire tread marks. For the disrespect, of course. Had nothing to do with him talkin' about Noah like he was
his
fucking property. Nothing at all.

His eyes narrowed and he could feel his temper icing over his gut. He glanced at the guy's finger, then locked eyes with him. The dude back-stepped like he was line-dancing.

Shep smirked and sauntered past the dickhead, tossing over his shoulder a casual, "We'll be in touch."

You're responsible for your own shit. Get it done.

Shep shouldered through the heavy metal door like he had a personal beef with fire exits. It banged against the chipped concrete wall. The parking lot was empty.

He was coming apart, he could feel his very bones shaking under the metaphorical weight he carried. He needed to talk to Pretty Boy like his bike needed gas. And he'd missed his chance.

He heard the distinct snick of a Zippo to his left and a warm voice chuckled softly. Shivers raced down his spine as he turned his head.

"For they know…" Pretty Boy leaned against the wall, just out of the pool of security lights, a newly lit cigarette dangling from his split lip. He pushed off the wall, walking towards Shep with a lazy kind of grace, eyes locked on Shep's face as he stopped in front of him. His voice dropped an octave as he whispered, "When their Shepherd is nigh."

Shep forced a slow breath. Once upon a time, he hadn't been so easy to sneak up on. He was just so fucking preoccupied lately. "Pretty Boy."

The slow smirk rolling across Noah's face must have hurt, but he never flinched. "Tell me, did you pick my road name? Or was it one of the old ladies?"

"I think it was Voo." Shep patted his jeans down looking for his smokes. He was supposed to be giving Noah a talking-to. Giving him hell for taking cash on the side or for offering his body up to get beaten, or maybe killing that guy last week with all the panache of highly functional psychopath, he wasn't sure which now. But he just kept watching Noah's lips caress the filter of his Marlboro and smoothly stream smoke into the sky.

"Always knew that handsome fucker had a thing for me." Noah snagged a second smoke out of his own pack and lit it, offering it to Shep.

He took the smoke, definitely
not
thinking about Noah's lips wrapped around it seconds before. He inhaled deeply, trying to find the words that usually came so easily to him. The smoke felt good passing through his lungs, the sharply sweet tang of the tobacco recalling another smoke they had shared.

Noah smirked. "I know what you're thinking."

Shep barely bit back a damningly sharp exhale. "I highly doubt that."

"You're thinking about that night … in your truck," he whispered, voice rough and still too soft. He clicked his lighter rhythmically against his thumb ring. "Aren't you?"

He pulled the flask from his cut and took another sip of liquid courage. "Yeah, maybe …"
But not for the reason you're thinking, I assure you.

Against his better judgment, he'd offered to celebrate Noah's eighteenth birthday, since no one else would. Somehow as a twenty-three-year-old, he'd fallen under Noah's sweet talking charm and they'd ended up by the riverbank, sittin' on the tailgate. Talking too long into the night and sipping a little of Eddie's shine. By the time they'd headed back, they were both too tipsy to drive and had to hoof it. Shep had pulled his last smoke out of the pack and gamely passed it between the two of them as they stopped in front of Noah's trailer.

The temptation building inside him, the demon he dared not name, clawed up his spine. He should have stepped back, but his feet refused. A swift ache pulsed low in Shep's belly. The need to feel Noah's lips against his own growling in the back of his throat. Step away? Not for a million dollars and all God's grace.