Read Her Only Hero Online 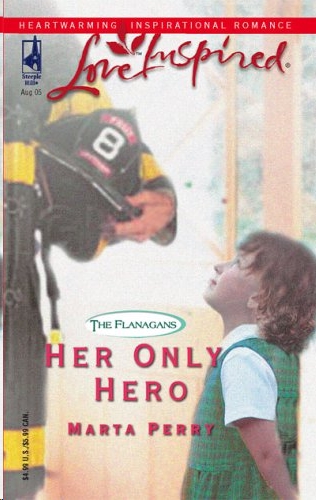 and in this way you will obey the law of Christ.

This story is dedicated to Gary and Arddy Johnson, with much
love. And, as always, to Brian.

“I
suppose you’d
better come in.”

Laura McKay had a feeling that sounded ungracious. She tried to
make amends by forcing a smile as she stood back to let the uniformed
firefighter step into the foyer of her brick townhouse.

The man glanced through the archway to the bare, dusty area she
hoped would eventually be a ground-floor shop. Searching for something to find
unsafe, no doubt.

“Sorry to bother you.” He consulted the clipboard he carried.
“Ms. McKay, is it? I’m Ryan Flanagan, from the Suffolk Fire Department.”

He didn’t recognize her, then. Funny, because she’d known Ryan
Flanagan from the moment she opened the door.

Ryan hadn’t changed all that much from the tall, handsome
football hero he’d been in high school. One of the popular Flanagan brothers,
with those deep-blue eyes and that cleft in his strong chin, he’d had every
girl at Suffolk High School longing to be the recipient of one of his teasing
smiles, including her.

Well, that was a long time ago. It didn’t matter that he hadn’t
remembered the shy underclassman who had admired him from afar.

“I don’t understand why you’re here.” She glanced up the stairs
of the three-story townhouse, longing to get back to the work she’d set herself
for the day. “I have all the necessary permits for the renovation, and the
building has already been inspected by your department.”

He shrugged, smiling. The smile was, unfortunately, just as
devastating as it had been in high school.

“Just one of those necessary things, I’m afraid. Someone called
the department with a complaint, so we’re obligated to check it out.”

“Someone complained about me?” That jerked her mind away from
the wallpaper she’d been removing. “Who?”

“Anonymous.” He shrugged again. “It happens. If you’ll just let
me take a walk-through and check things out, I’ll get out of your hair.”

He glanced at her head as he spoke, and she put up her hand to
discover that the bandanna she’d tied on to protect her wiry mane was thoroughly
covered with plaster dust. She swatted at it uselessly and then pulled the
thing off. What difference did it make what she looked like, anyway? The
important thing was to get back to work.

Her nerves tightened in a way that had become too familiar
lately. Time was running out, and she had to

finish the job. If she didn’t—

Well,
if
didn’t bear thinking about.

So the sooner she got rid of Ryan Flanagan the better. She waved
a hand toward the staircase. “We might as well begin at the top. That’s where
I’ve been working today.”

She started up the wooden stairwell, not touching the gritty
railing. The wood was mahogany under all that dirt, and eventually it would
shine. The whole place would.

His footsteps sounded behind her. “You’re actually rehabbing
this place yourself?”

“What’s wrong with that?” She sounded tart, she supposed, but
she’d heard that incredulous tone from enough people since she’d started this
job.

“Nothing, I guess. But this place has been deteriorating for so
long I figured eventually it would be torn down. Or fall down.”

“You’d be surprised. The place has been standing since 1810, and
they built to last then.”

The three-story brick townhouse on the edge of Suf-folk’s
historic district might look decrepit, but she wasn’t giving up on it. It had
the potential to be a showpiece. Besides, it was all she and her daughter had
between them and an uncertain future.

She glanced toward the apartment door as they passed it. She’d
fixed the apartment up first, so she and Mandy would have a decent place to
live. Mandy was occupied right now with a new coloring book, and she wouldn’t
hear them.

Her heart cramped. No, Mandy wouldn’t hear them.

They emerged into the open space at the top of the stairs. Ryan
looked around doubtfully, and she understood what he was seeing.

The top floor looked like a barren, dusty wreck. Shreds of faded
floral wallpaper clung to old horsehair plaster, which had crumbled away to the
underlying lath in places. The May sunshine filtering through high, cracked
windows, lit up every flaw.

Ryan touched a dangling strip of wallpaper. “You think you can
actually make something livable of this?”

She wasn’t used to explaining herself to people, but Ryan, with
his uniform and that report sheet on his clipboard, wasn’t just anyone. That
insignia he wore gave him the right to probe. Tension skittered along her
nerves. He could shut her down.

“Yes, I do. Believe it or not, I have a degree in interior
design.”

“My father was a contractor,” she said quickly. “I learned from
the best.”

He nodded, still looking doubtful, and started around the third
floor. Holding her breath, she followed him. She ran a clean work site—her
father had always insisted on that. He wouldn’t find any junk around to
complain about.

Ryan’s attention to his inspection gave her ample time to take a
look at the man he’d become. The seriousness with which he seemed to take his
job was new. The Ryan she remembered had never taken anything seriously, but
he’d always seemed able to charm his way out of the trouble his recklessness
had gotten him into.

She wasn’t surprised by the neat blue uniform with the Suffolk
Fire Department patch that fit his tall figure so well. All the Flanagans had
been wedded to the fire department. There’d never been much doubt as to what
Ryan would do with his life.

He turned toward her as they reached the stairwell again,
smiling. She had to fight not to respond too warmly to that smile. Ryan had
added some breadth and height since high school, and the sense of maturity
combined with his uniform made a powerful package.

“Looks like you’ve got everything under control up here. Shall
we check out the rest?”

She could breathe again. She nodded and started down the stairs,
feeling him behind her.

“My apartment on the second floor is completely finished and
we’re moved in. It’s not necessary for you to go through that, is it?” She
paused, looking up at him.

“I don’t think—” His gaze fixed on something over her shoulder,
interrupting the words.

She turned. Mandy stood there, hand on the doorknob, looking at
them with a grave, questioning expression in her dark-brown eyes.

Laura reached her in a few steps and touched her daughter’s
curly brown hair. “It’s okay,” she said, signing as she did so. “I’m showing
the fireman around. There’s nothing to worry about.”

She looked toward Ryan. If she saw pity in his eyes, she’d let
him know what she thought about that.

But Ryan was squatting to a five-year-old’s level, and she read
only friendliness in his face.

“Hi. My name’s Ryan.” He finger-spelled the name carefully.
“What’s yours?”

He spoke naturally, apparently copying what she’d done, and she
appreciated that. With her two hearing aids, Mandy might be picking up
something.

“My daughter’s name is Mandy.” She continued to sign as she
spoke. Mandy should never feel left out. “You know sign language.”

“You don’t need to sound quite so surprised.” He grinned.
“Firefighters need to be able to communicate with people we run into on the
job. Unfortunately you’ve seen almost my whole vocabulary.”

Ryan seemed to have turned into a responsible member of society.
Maybe she should stop thinking of him as the reckless, laughing kid he’d been
in high school.

She gave Mandy a little push toward the apartment. “You finish
your picture. We’ll probably be done by then.”

When the door closed behind her, the smile slid from his lips.
“She’s a beautiful little girl. Has she been deaf since birth?”

“Yes.” She started down the steps, hoping he’d take the hint.
Her personal life was off limits.

“My husband died a year ago.”

“I’m sorry.” He stopped next to her at the bottom of the stairs,
and she was aware of how tall and solid he was. “It must be rough, trying to
handle everything on your own.”

Her smile felt frozen. “Not at all. At least, not if we can
finish this up so I can get back to work.”

He should have taken offense at that, but he just studied her
for a moment, his deep-blue eyes intent but friendly. Then he nodded.

“Okay. Let’s take a quick look around the downstairs.”

She followed him through the downstairs living room, mentally
chastising herself. He’d just been expressing sympathy. She had to stop being
so sensitive about her independence.

They pushed through the swinging door to the old kitchen, and
she wrinkled her nose. She’d done nothing here yet, and the cracked linoleum
and rusted sink rebuked her.

They reached the back door without speaking. Ryan pulled the
door open, stepped onto the back porch, and frowned at the stack of wood and
construction rubbish piled against the wall.

“It’s a
hazard.” His tone was uncompromising.

“I ordered
a Dumpster last week. I don’t know why they haven’t brought it yet.” It was yet
another of a long string of things that had gone wrong recently.

“Do you want me to call them? They might move a little faster at
a request from the fire department.”

He was just being nice, she reminded herself. She didn’t need to
bite his head off.

“I’ll take care of it,” she added more evenly. “They promised me
it would be here days ago.”

He nodded, scribbling something on a sheet and then handing it
to her. “This just confirms that we’ve spoken about it. If the situation isn’t
remedied in a few days, we’ll have to cite you.”

He studied her for a moment and then gave her that slightly
lopsided smile she’d once yearned to see. “Don’t look so worried. This is just
a formality. I’m sure you’ll take care of the problem.”

She forced a return smile. “Thanks.”

He stepped off the porch. “My name and number are on the form.
If you’d like me to get after the trash company, just give me a call.”

She could do whatever she had to do, despite the addition of
Ryan Flanagan to the list of factors complicating her life since she’d taken on
this project.

Her daughter’s future depended on her success with the building.
She couldn’t count on anyone else for help—not her family, not her in-laws, not
God.

A fierce wave of maternal love swept through her. That didn’t
matter. For Mandy, she could do anything.

Ryan piled into the truck behind his older brother, Seth, heart
pounding as it always did at the shrilling of the alarm. He glanced at his
watch. Six-thirty. Fire could have caught people asleep at this hour of the
morning.

Seth, taking his new rank of lieutenant very seriously, was
listening to the info coming in on his radio.

“Three-fourteen Delaware Street. Isn’t that the place you
inspected yesterday?”

“Yes.” Ryan’s nerves clenched. “Woman and a child in residence.
A deaf child.”

He hadn’t gotten their images out of his mind yet. Laura McKay,
with that mop of wiry dark hair springing out around her grave, determined
face. Her daughter, Mandy—brown curls, her mother’s dark eyes, and those two
hearing aids in her small ears.