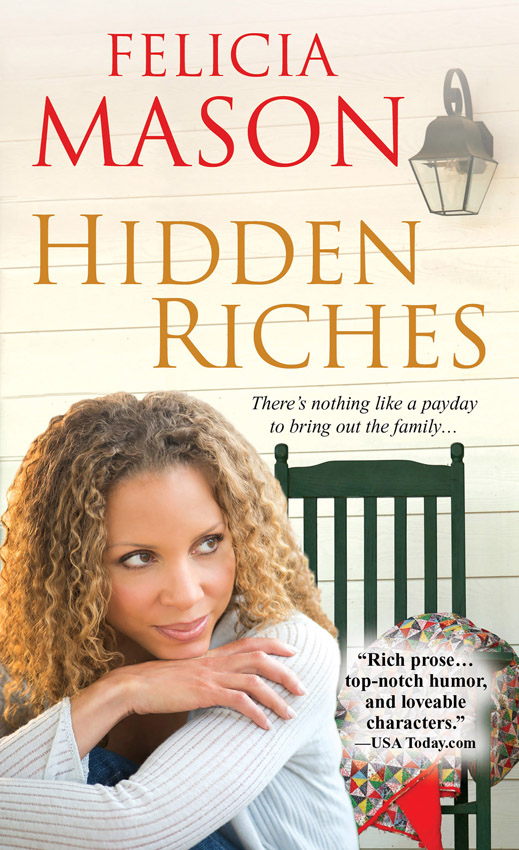 Ana Mae's kin offered some much-needed entertainment in the town. While many who showed up at the wake wondered about Ana Mae's brother, the homosexual who lived in San Francisco and had the nerve to put it in the newspaper so everybody would know, just as many others wanted to know whatever happened to the two sisters. Nobody had seen skin or teeth of either of them for nigh on about twenty years, though Ana Mae always talked about them like they just ran out to get a pack of cigarettes or some milk from the Day-Ree Mart.
And as at wakes all over the place, some people just wanted to see who all else was there.
Ana Mae was so good at keeping secrets, not even her best friend knew about that Howard thing.
Though she was one of the biggest gossips in town, Rosalee Jenkins prided herself on being able to keep a secret when it mattered. It hurt her that Ana Mae hadn't confided in her about this son of hers. So at Ana Mae's wake, Rosalee stood near the casket and fussed at her friend.
“I'm mad at you for dying, Ana Mae. And I'm mad at you for not telling me about that boy.”
“She can't hear you, you know, Sister Rosalee.”
The gentle words came from the Reverend Toussaint le Baptiste. He stood tall, slim, and as good-looking as he had been back when they were young and before he'd found the Lord. Many a time, Reverend Toussaint, as most people called him these days, had been asked if he was related to the singers El DeBarge or Christopher Williams. He had the lighter than cafÃ© au lait skin, the wavy “good” hair, and a slim moustache that added a dashing Errol Flynn touch to features that women gravitated to like honey.
“I know, Too Sweet. I just miss her so much.”
“Ana Mae is wearing a crown and walking the streets of gold right now.”
Rosalee sniffed.
The minister pulled a tissue from a box discreetly tucked at the side of the coffin. Pressing it into her hand, he said, “I miss her too, Sister Rosalee. I miss her too.”

Across the room, a small group huddled, surveying the survivors. “Ana Mae never had no kids,” someone whispered loudly.
“Shoot, far as I know she was so holy she never spread her legs for anybody.”
The person who said that blanched when the comment earned her an evil-eyed look from Zenobia Bryant. “Y'all ought to respect the dead,” Zenobia hissed. She glanced around trying to make sure none of Ana Mae's immediate family had heard the nasty remark.
Truth was, though, townsfolk in Drapersville and Ahoskie, North Carolina, weren't the only ones asking who the hell Howard was. Ana Mae's family wanted to know too.
JoJo, a former showgirl in Las Vegas, stood near the door waiting for a cue from the funeral parlor staff. Her husband, Lester, glanced over his shoulder at his brothers-in-law getting out of the car.
“I was expecting your brother's, uh, er, well, his boyfriend . . .”
“His life partner,” JoJo said, as if explainingâagainâto a none-too-bright child.
Lester snorted. “Yeah, his partner. I expected him to be more faggy. But he's like a regular guy. Even played some football in college.”
JoJo narrowed her eyes at her husband. “You can be so vile.”
He raised an eyebrow. “What?” he asked, as she stomped away. “What'd I say? I was giving the man a compliment. For a homo he's not all that bad.”
“Don't know what she's all in a huff about,” Lester muttered as he patted his breast pocket for his smokes. He might have time for one before they had to go inside. “She told me to be nice to her relatives.”

Twenty minutes later, the Reverend Toussaint le Baptiste cleared his throat at the lecternâfor the third time. No one in the funeral chapel paid him any mind.
“Our Father, who art in heaven,” he yelled above the din of the mourners come to pay respects to the Futrell family.
By the time he got to “Thy kingdom come . . . ,” the place had quieted down, and others intoned the old and sacred prayer with him. After the Amen, the minister clasped his hands around his Bible.
“On behalf of the Futrell family, I want to thank you all for coming out tonight. Sister Ana Mae was a faithful member of the church, and she truly loved her some God.”
Heads bobbed in agreement. In the back, near a display of mums and gardenias nearly as tall as he was, Lester muttered to JoJo.
“That's the preacher? What they got in the water down here? Would you look at that? Wrist just as limp as your brother's.”
JoJo poked him in the ribs with her elbow.
“Hey!”
“Shh,” several people said, turning to glare in his direction.
“Can't you just hush up for half an hour?”
Blood rushed to Lester's neck. “I don't see why we have to do this. Why we even had to come out here. You didn't even like Annie Mae.”
“Her name is Ana Mae. And just because we weren't close didn't mean I didn't love my sister. And, Mr. High Roller, I didn't ask you to come here with me.”
With a scowl toward the back of the room, an indication that JoJo and Lester's hushed conversation wasn't so shushed, Reverend Toussaint extended his hand toward Delcine.
“Sister Marguerite Futrellâsome of you all might remember her as Delcineâis going to say a few words.”
Lester rolled his eyes. “Ah, now, here we go. Queen Delcine.”
JoJo, with her big teased hair, long false eyelashes, and too-tight, sequined red dress, cussed under her breath, then inched away from her husband.
“Excuse me,” she said to a man wearing a camouflage green hunter's jacket. She needed to put some distance between her and Lester before they got into a fight right here in the funeral home.
She paused next to her brother-in-law, Delcine's husband, who silently switched places with her. Clayton took her hand in his and squeezed it.
JoJo offered her brother a thankful smile, then turned her attention to their sister.
Dressed in a royal blue fitted suit that looked like it was tailored just for her and that probably cost more than the trailer that JoJo and Lester lived in, Delcine went to the center of the room, where she could address the crowd of about eighty or so mourners who had ventured out to come to the wake.
“My sister, brother, and I thank you for coming tonight. We know you loved Ana Mae very much. Her passing will leave a void in many hearts.”
“Spoken like a true diplomat,” JoJo said out of the side of her mouth.
Clayton Futrell smirked. “At least we all showed up. I doubt Ana Mae even expected that.”
Delcine cut a glance at her siblings, her eyes narrowed and her lips curved up in her familiar smile-snarl.
Both JoJo and Clayton recognized it as a clear sign that their murmuring was reaching her ears. Flushing, they both looked down at the floor. While JoJo was genuinely contrite, she doubted if Clayton was. He'd never minced words on his feelings about either their hometown or the sister he didn't really know. There were a lot of years separating them. Clayton had always had a closer relationship with JoJo, who was just eighteen months older.
Clayton was gorgeous. He'd gotten the best of the family's genes, and JoJo was proud of all he'd accomplished. From the subtle whiff of an expensive aftershave to the custom suit, he exuded the wealth and the privilege that came of being a successful doctor out in California.
Delcine lived with her family in upper-middle-class suburban luxury outside Washington, D.C. She and her husband both had important and high-ranking government jobs that afforded them a lifestyle JoJo envied only when she was feeling sorry for herself. And that was even though it was never quite made clear just what it was that Winslowâor Delcine, for that matterâdid for a living. As far as JoJo was able to determine, Winslow had something to do with government contracts, and Delcine worked as the director or assistant director in some kind of government office.
JoJo was a Futrell who, like Ana Mae, hadn't made much of her life. Yeah, she lived in Las Vegas and used to be a sought-after dancer in the top shows on the Strip, but that was fifty or sixty pounds ago and before she'd hooked up with Lester. He'd promised her the world, and he'd given her a trailer park and a pack-a-day cigarette habit. She'd kicked the cigarettes to the curb. Now if she could just do the same to Lester.
Too many times now she'd heard tourists exclaim that she looked like a black Peggy Bundy. She couldn't help thinking that that had once seemed like a compliment, but that now, compared to her living-high-on-the-hog and well-put-together siblings, she looked like what she was: trailer trash.

Western Kisses – Old West Christmas Romances (Boxed Set) by Carré White
Yours or Mine by Craver, D.S.
House of Holes by Nicholson Baker
Taking The Reins (The Rosewoods Book 1) by Katrina Abbott
Laughing Wolf by Nicholas Maes
For the Love of Alex by Hopkins, J.E.
Dismissed by Kirsty McManus
Finding Charity: Red Devils M.C. by Michelle Woods
Ring of Fire by Susan Fox
Divas Do Tell by Virginia Brown