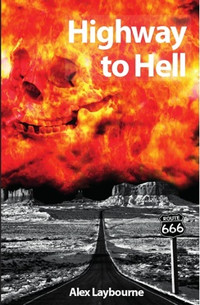 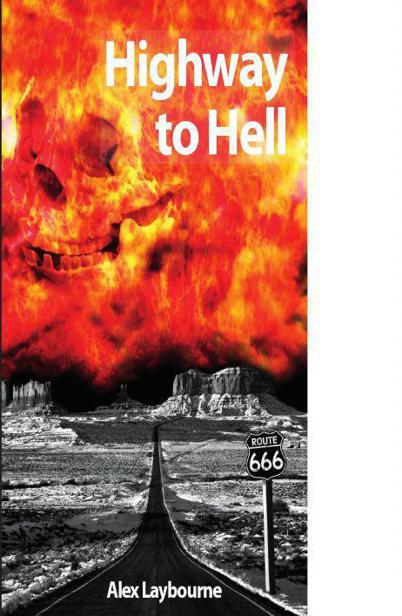 Highway to Hell
by Alex Laybourne is licensed under a

Creative Commons Attribution-NonCommercial-NoDerivs 3.0 Unported License.
Based on a work at
http://www.alexlaybourne.com

This ebook is licensed for your personal enjoyment only. This ebook may not be re-sold or given away to other people. If you would like to share this book with another person, please purchase an additional copy for each recipient. If you’reading this book and did not purchase it, or it was not purchased for your use only, then please return to Amazon.com and purchase your own copy. Thank you for respecting the hard work of this author.

Formatting and layout by
Everything Indie

This would have never happened without the continuing support of my wife who puts up with me and all my disturbing conversations at bedtime.

I would like to thank my editor Nick Ambrose at Everything Indie, I know that this wasn’t an easy case for you.

I would also like to thank my brother-in-law Eelco Wijnands for creating my cover art.

This is for my wife Patty, and our kids, James, Logan and Ashleigh.

I: Marcus (Plus One)

I: Marcus: An Old Friend Returns

IV: Helen: It’s the Quiet Ones You Have To Watch

A GREAT HALL IN A DYING WORLD

To sad humanity alone,
(Creation's triumph ultimate)
The grimness of the grave is known,
The dusty destiny await . . . .
Oh bird and beast, with joy, elance
Effulgently your ingorance!
Oh man, previsioning the hearse,
With fortitude accept your curse!

Marcus Fielding looked at his watch; he was halfway through his shift, the last one of his current rotation, not to mention the last shift before his three-week vacation. It was a sort of second honeymoon. He and his wife had been together twenty years the previous April, yet had never been away just the two of them. They had always had at least one kid tagging along; first it was the twins, Erica and Bryony, then Roger, and finally little Marcus Jr. Not that Marcus cared. His kids were his life and he would do anything for them.

He wiped his forehead with the back of his hand before replacing his cap. It was the middle of July and the temperature had been stuck in the low thirties for over two weeks already. While the heat was welcome, the new bulletproof vests the force had just issued made the officers who wore them lose fluid quicker than they could consume it. All in the name of safety, the duty sergeant had said. “Easy for him to say”, Marcus had grumbled along with all the others in his section at the end of their first shift wearing the new vests. He remembered that there had been a queue of people by the toilets waiting to wring their shirts out before putting them in their bags.

“I’ll make one more round, and then head back to the car. I’ll meet you there.” He spoke into his radio using another recent addition, the covert earpiece and microphone.

“Ok, I’m done up here anyway. There’s nobody; it’s too hot; everybody’s down at the beach,” a young voice answered, him optimistic as ever, his love for the job still passionate and unbridled.

Simon Dillings had been on the force for three months, and was the lucky protégé of Marcus. The only problem Marcus and every other officer he knew had with tutoring a rookie was the foot patrol. Although, it did bump him up over quota, not to mention it was a tried and tested method of breaking in the new guys, showing them it’s not always gunfights and car chases like you see in the movies.

“Lucky them. Well we’ll head in for some grub and then you can impress me with your paperwork skills again. How’s that sound?” Marcus asked, grinning as he pictured Simon’s face drop, his glasses slip down his nose and his mouth screw up, pursing his lips together in a way that made him look constipated. Marcus liked the kid: he was a good, honest guy, and he would go a long way.

“Boy, sounds like a party. You sure do know how to spoil a man,” the voice answered back, a little bit of attitude finally beginning to crack the ‘good-boy’ rookie shell.

The town center was quiet, with the age demographic definitely favoring the slow moving older citizens, whose idea of causing trouble ended with whispering about someone at the local bingo hall or bridge club meeting. Deciding to cut his route short, Marcus turned left at the midway point of the high street and entered the covered shopping arcade. It had just been renovated a couple of weeks before, but the local youths had already managed to tag two walls with vibrant paint and even more colorful language. Truth be told Marcus was surprised it had taken them that long. The town wasn’t known for being the most picturesque place in the country, and with an unemployment rate that never seemed get any lower, benefit claimants flocked to the town in droves, which in turn had led to council estates springing up wherever there had once been a bit of green ground where the kids could play.

Unlike Simon, Marcus had lived in the town his whole life, and had watched as it made the transition from a small coastal English town to a place the size of a small city, and now it was on the cusp of linking up with the three surrounding towns, all of which were suffering the same fate. Marcus knew it would only be a matter of time before someone would raise the idea of combining them all.

Easterton had once been nothing more than a proud and well-respected fishing village, which grew as the industry it housed did. Then overnight the fishing moved away, taking the majority of the jobs with it. Yet the people had stayed; they were settled, had families, and so the next generation of employment arrived. Factories rolled into town, offering short-lived salvation to the locals, but the eternal quest for cheaper labor played its part and they all watched as once again their industry was taken away, this time to make room for the immigrants who were not only willing to work, but more than happy to do so for a much lower remuneration.

Marcus knew first-hand what a crappy place the world was, and that was in part why he decided to join the police. He wanted to be able to say the neighborhood that his kids would grow up in was safe. It was a losing battle, he knew that, but he had never been one to just cover up and take the abuse.

Marcus noticed that three shops had decided not to open at all today. Each had signs in their windows advising potential customers that the temporary closure was a result of the near unbearable hot weather. They were small, family run establishments. One dealt in leather bags, and another sold handmade cards for all occasions – or so the sign in the window claimed. The last was a craft shop, its window filled with knitting patterns; wool of every color imaginable lined the back wall as if it were where God had made his Technicolor Dreamcoat. None of them would see the end of the year. It was a sad fact of small town life that no small business could compete with the bigger corporations, many of which were part of international consortiums and so not dependent on the locals to survive.

Stopping, Marcus bent down and grabbed an empty cola can and threw it in the bin that was about half a meter away. Preservation of Public Image had been the session that asked every office to stop and pick up litter while on duty. Marcus and his colleagues had another name for it, but complied nonetheless. He whistled to himself as he moved further along, not a song but just a jaunty tune that seemed to grow in his head.

Marcus’s stomach growled; he had skipped breakfast that morning, and now he would be made to be made to regret it. He patted his trousers, and the pockets of his vest, and then the pockets of his sweat soaked shirt. Nothing. Then he saw it: his wallet, on the table beside the front door. Sitting, waiting for him to grab it – only he had gone out the back that morning.

“Damn it,” he muttered under his breath. He looked at his watch, annoyed with himself. In truth it wasn’t the fact that he forgot his wallet, or even his grumbling stomach that made Marcus frustrated. He had just learned over the years that something always went wrong when he was unprepared.

Before joining the force, Marcus had been a boxer; a light heavyweight, and one with a lot of potential if the people back then were to be believed. He had a record of 21-0 with 18 knockouts when his manager Walter Whitney had first promised him a title fight. Walter had been a small, reptilian looking man with the cold beady eyes of a shark and a temper to match. He had been Marcus’s manager from the beginning, ever since he had first spotted him sparring at the local fitness center. He had been big and fast, and even as a youngster had had the power to stop most of the other fighters in his gym. He had been described as the perfect mix of George Foreman and Joe Fraser with his raw power yet graceful style.

Yet it had all begun to crumble around his ankles one afternoon, a matter of days after he had knocked out the number one contender for the WBO title at the start of the fifth.

Dragon Princess by S. Andrew Swann
The Orpheus Trail by Maureen Duffy
Chasing A Spectre (War for Dominance Book 0) by Chris Kennedy
Dallas [Wolfe Brothers 3] (Siren Publishing Classic) by Kaylee Feagans
On the Accidental Wings of Dragons (Dragons of Eternity Book 1) by Wetzel, Julie
Memoirs of a Hoyden by Joan Smith
Confessions of a Teenage Psychic by Pamela Woods-Jackson
The River by Mary Jane Beaufrand
Truth Or Dare by Lori Foster
I Kissed a Dog by Carol Van Atta