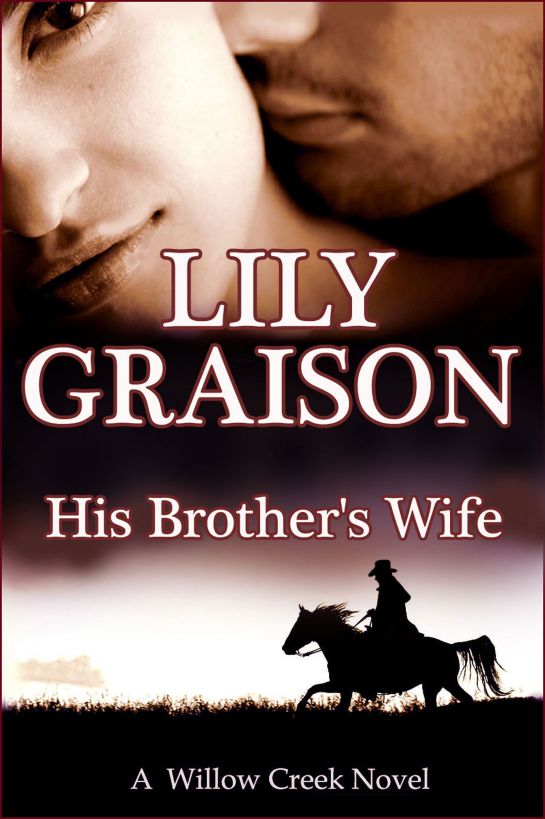 accepts a wedding proposal through a mail-order bride agency
and spends every dime she has to travel across country to be
married, she has no idea her bridegroom is a fourteen-year-old boy.
There’s no way she can accept his offer but with winter coming on,
Grace has little choice but to stay. Things go from bad to worse
when she meets Jesse’s older brother, Rafe. The attraction is
immediate. He’s surly, rude and downright pig-headed but he makes
her pulse race with a single glance.

thought to teach his brother a lesson by making him take
responsibility for his rash behavior but one look at Grace and his
plans go up in smoke. She isn’t the dowdy spinster he imagined and
having her live in his house and not be able to have her is the
worst kind of torment.

As fall turns to winter, Grace finds that living
with the two brothers isn’t as simple a thing as she once thought.
Jesse still thinks marriage is in the cards, and Rafe is a
devilishly handsome distraction she doesn’t need. She can’t decide
if he hates her or wants to kiss her. And how does she avoid
breaking Jess’s heart when it becomes clear that the attraction
between her and Rafe is mutual?

He was going to skin that
boy alive. Rafe bit his tongue to keep from shouting and crossed
the yard to the barn, his heated gaze on Jesse. Stopping by the
fence, he adjusted his hat and propped his foot on the bottom rung.
And waited. He hid a smile when Jesse stopped, turned to face him
and yelled, “What?”

Rafe propped his arms on
his raised knee. “Just wondering where the hell you think you’re
going. We’ve got things to do around here, if you haven’t
noticed.”

Jesse rolled his eyes and
cinched the mule before leading him to the wagon. “I got places to
be today.”

Straightening, Rafe raised
an eyebrow at him. “You aren’t too big for me to take a belt to
your hide.”

“Don’t tempt me.” The
rebellious look on his brother’s face darkened, the freckles
splattered across Jesse’s cheeks and nose the same color as the
thick thatch of red hair on his head. In the ten years he’d been
gone, the kid had grown almost as tall as he was. His attitude had
too. He lowered his leg to the ground and tried to keep the
irritation out of his voice. “Where are you going,
Jesse?”

“What for?” Jesse mumbled
something under his breath, his face growing brighter red before he
turned his back to him. His movements were jerky, his shoulders
held rigid. “We don’t need anything from town that can’t wait and
that hole in the barn roof isn’t going to fix itself. Unhitch that
mule and go grab that bucket of nails out by the work shed.” Rafe
walked off, hoping Jesse would just do as told for once.

A glance over his shoulder
and he bit his tongue, trying to rein in his temper. Jesse was
still hitching up the mule. Rafe stopped, turned to look at him
again, and had to remind himself that killing a man, even your own
kin, was illegal. If the boy didn’t already hate him with a passion
he’d be tempted to take a belt to his backside just as he’d
threatened to do.

He watched him finish
hitching the mule, his lips bloodless from pinching them together.
The silence stretched until Rafe thought he could touch it. “Jesse,
what did I say?”

“I don’t really give a
damn what you said. Fix the barn yourself. I have things to
do.”

That was it. The last
straw. Rafe closed the distance between them at a fast clip, his
booted feet hitting the ground in loud pops. “And what would that
be?”

Jesse swallowed and licked
his lips. His face went a funny shade of white before he whispered,
“I ordered me a wife.”

It took Rafe a full minute
before what Jesse said registered. He stared down at him, letting
the words rattle around in his head before he blinked and focused
his eyes. "You want to run that by me one more time?"

Jesse flicked a quick look
at him before lowering his head. "I ordered me a wife." His
swallowed, his throat moving with as he did before he lifted his
head, his eyes flashing. "And don't go yelling at me for it either
cause it ain't going to do you no good."

He ordered a wife?
Rafe tried to wrap his head around the statement but as
much as he tried, it just didn't make sense. Jesse wasn't old
enough to marry. He was just a kid but there he stood, head held
high, shoulders back and looking as sure as any man about to make
the biggest mistake of their life.

He bit his tongue to keep
from shouting what a little fool he was, adjusting his hat instead,
and propped his foot on the wagon wheel to give himself more time
to collect his thoughts. When he knew he could speak without
yelling, he opened his mouth. Nothing came out.

Jesse's face turned a
light shade of pink before the look in his eyes turned murderous.
“Just get to the yelling part, Rafe. I’ve got places to be and
you're wasting my time!”

Rafe flinched. Jesse's
high pitched voice grated on his nerves most days, more so when he
yelled. The urge to bend the boy over his knee was strong but he
refused to treat Jesse like a child even though, in his eyes, the
kid would always be his little brother.

When he left home ten
years ago, the kid has been docile and sweet natured. That wasn’t
the case now. Since the day he’d returned six months ago, Jesse had
fought him at every turn. Everything he said turned into a battle
of wills and he was at his whit’s end trying to figure out where
he’d gone wrong. His pa would have whipped that boy bloody for
talking to him the way he did.

Why he was the lucky
recipient of his anger was a mystery he’d never figure
out.

Crossing his arms over his
chest, he narrowed his eyes and pinned Jesse with a glare of his
own. “I heard that part, little brother. What I want to know is
why?”

The mutinous glare Jesse
shot him should have scorched the skin right off of him. “Stop
calling me little! I’m fifteen years old.”

“Fourteen. You have nine
whole months before you’ll be fifteen.”

“So… you’re too young to
get married.” The fire in Jesse’s eyes matched the temper the boy
had developed over the years. “And you are little." Rafe grinned.
"My little brother.”

Jesse’s face turned red
again, his fingers curling into his hands to make fists. “I’m tired
of everyone in this town calling me your little brother. I’m a man.
Have been since pa died and you were off doing God only knows what.
It’s about time people saw me as a man, so, I ordered me a
wife.”

Rafe leaned his head to
one side. “And what do you plan on doing with her?”

“Doing with her?” Jesse
stared at him wide-eyed. “What do you think I’m going to do with
her? I’ll make her clean the house and cook my meals. Wash clothes
and make sure my socks don’t have no holes in them.”

Rafe laughed. The boy
didn’t have the first clue what he was getting himself in to. “How
old is this wife you ordered?”

“You don’t know?” Rafe
raised an eyebrow at him. “What does she look like?” Another
shoulder shrug was all the answer he got. “You do realize most of
those mail-order brides are plain and dowdy looking spinsters that
no other man would marry, right?”

“What difference does it
make? I didn’t order her to look at.”

It was obvious his brother
didn’t have the first clue what a wife was for. Sure those other
things were nice but a man didn’t take a woman to wife just to make
a house servant out of her. He wanted a nice warm body to keep him
warm at night. A sweet smelling little thing to make the hard days
seem a little less rough. Someone to bear his children.

Arnie Jenks and the House of Strangers by Tim Bradley
A Slow-Burning Dance by Ravenna Tate
A Man of Parts by David Lodge
Singe by Ruby McNally
River Bound: Bound and Tied, Book 3 by Jackson, Myla
Matala by Craig Holden
A Lil' Less Hopeless by Tara Oakes
Secrets of Midnight by Miriam Minger
Born Fighting by James Webb
Edge of Nowhere by Michael Ridpath