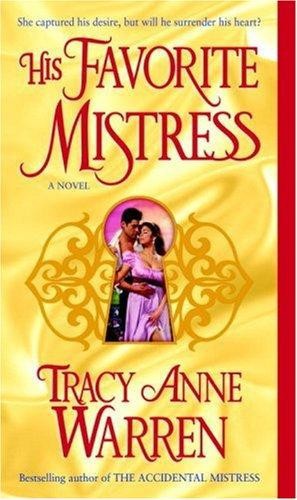 Excerpt of His Favorite Mistress

A
LL IT WILL
take is a single bullet straight through the heart,
Gabriella St. George told herself as she clutched the pistol inside her palm.

She was a good shot with confidence in her skills. After all, she’d been taught by the best—the Great Moncrief himself, who was known in entertainment circles as the finest sharpshooter in the civilized world. Her biggest concern was finding the courage to hold fast to her resolve and carry through with her plan—that and keeping her arm from shaking so violently that she fouled her aim.

She supposed she had good reason for her jitters, since before tonight the only lives she’d taken had been those of animals—rabbits and birds that she’d hunted for food as she’d traveled around England. She’d even been known to poach a deer on occasion in order to hold starvation at bay. But tonight would be different.

For tonight she planned to kill a man.

Easing deeper into the late evening shadows that painted the walls and corners of the study black, she waited, knowing that eventually he would come. She’d been observing him this past week and knew his habits, knew that he always stopped in this room for a few minutes each night before retiring upstairs.

Thanks to a maid who didn’t mind chatting with a friendly stranger while out completing her errands, Gabriella had learned that, except for the servants, he was alone here in this immense townhouse. His wife and young children, so she had been told, were at his estate in the north of England.

The information had come as a relief, since she had no desire to involve innocents. After all, his crimes were his alone; he was the only one deserving of retribution. Even so, she couldn’t completely set aside the guilt that nibbled at her like a school of tiny fish, aware that her actions tonight would bring grief to others. But she pushed aside her qualms.

One life,
she argued,
in recompense for another.

When she’d slipped through a conveniently placed window a couple of hours ago, she’d heard the low rhythm of male conversation, punctuated by sporadic bursts of laughter. He’d invited friends over, a small group of men gathered to share dinner, then drinks while they played a few rounds of cards. Having long ago learned the art of patience, she’d settled into a corner, gun in hand, and allowed time to pass.

At length, the house had grown quiet as his guests said their farewells and departed, the servants retreating to make their way to their beds. Only the steady ticktock of the room’s finely crafted satinwood casement clock broke the silence, together with the gentle crackling of the fire she’d watched a maid refresh about an hour earlier.
Not long now,
she judged,
and he will be here.
Shifting slightly, she worked to ease the stiffness and pent-up tension that had gathered in her muscles and joints.

Another five minutes elapsed before she finally heard footsteps. Pressing her back flat against the wall, she sank deeper into the concealing shadows and watched him stride into the room.

From the moment he entered the study, he dominated the space, commanding his surroundings with not only his impressive size and athletic grace, but with the innate forcefulness of his personality. Despite the tenebrous light, she recognized the arrogance in his gait, along with an unmistakable air of noble authority she would have assumed was bred into him from birth had she not known otherwise. Before tonight, she’d only viewed him from a distance, yet he seemed taller up close, his hair darker, so deep a brown as to be nearly black. A trick of the late evening shadows, she assumed.

Shivering, a tingle whispered along her backbone, her heart pounded with the force of a hammer striking an anvil, a reaction she had never before experienced while observing the man. Likely the sensation was a product of the tension she felt, well aware the moment she had been preparing for was now nearly upon her. Gathering her nerve, she tightened her grip on the gun and let him come farther into the room.

Reaching the desk, he searched for a match and candle. Light flared to life moments later, illumination spreading in a comfortable yellow glow over the space. She forced herself not to tremble, holding her position as he stepped toward a nearby bookshelf and began to peruse the titles.

She moved forward, the pistol held straight out before her. “Rafe Pendragon,” she declared in a clear, unwavering voice. “Prepare to pay for your crimes.”

His shoulders stiffened before he slowly turned to face her.

Only then did she see him fully, her gaze riveted to his impossibly handsome face. Classically hewn cheekbones framed a long patrician nose, his forehead strong, his jaw and chin cleaved from a heritage of ancient aristocratic stock. His lips were blatantly seductive, as if nature had designed them to entice a woman into wanting to commit any number of earthly sins. Then there was his complexion—swarthy instead of pale, with a delicious evening’s growth of whiskers that only enhanced his aura of masculine sensuality. Yet of all his attractive qualities—and they were legion—his most compelling physical feature was his eyes. Rich and deep-set, they were a pure, almost velvety blue, dark as midnight yet brilliant as a summer sea. Right now those eyes were gazing at her, full of keen observation and powerful intellect.
He is studying me,
she realized,
just as I am studying him.

A soft gasp escaped her lips, but she held herself and the gun steady nevertheless. “You’re not Pendragon!” she accused.

The stranger arched a dark eyebrow. “Indeed no, I am not. I trust you won’t shoot me for disappointing you, Miss…” He let the sentence trail off. “You are a miss, are you not, despite your present choice of masculine attire?”

Earlier this evening, she’d decided to dress as a boy. After all, sneaking into a townhouse to kill a man was not easily accomplished while wearing a gown, stays, and petticoat.

She ignored his query. “Where is he?”

“Rafe, I assume you mean? Well, I am not likely to aid you by revealing his whereabouts. Why do you want to harm him, anyway? Is it money you’re after?”

Her shoulders tightened. “I am no thief. If I were, I could have liberated a king’s ransom from this room while the lot of you were having dinner. Yes,” she offered when he tipped his head in unspoken inquiry, “I have been here for some while, waiting unobserved.”

“A regular little cat, are you? Tiptoeing in on silent feet. A useful ability for any person, I will admit.”

“I have many useful abilities, but I am not here to engage in a round of banter with you, whoever you might be.”

“Ah, forgive my lack of manners,” he drawled. “Wyvern at your service. I would make you a bow were I sure you wouldn’t put a bullet in me while I attempted the move.”

“I won’t shoot unless you give me cause,” she stated, inching the pistol higher. “In the interest of safety, however, I suggest you take a seat over there.” She nodded toward an armchair that faced the desk.

“Thank you, no. I am perfectly comfortable standing.”

“Comfortable or not, pray be seated.”

At a height of more than six feet, he towered over her. Aware she needed every possible advantage in a situation that was suddenly not going at all as she’d planned, she knew he would pose far less of a threat were he ensconced in a chair. Despite his apparent affability, she didn’t trust him for a second.

He met her gaze, then shrugged. “Very well, if you insist. After all, you are the one with the weapon. But first, tell me what grievance you have against my friend. He doesn’t generally engender such a violent reaction, especially among the fairer sex.”

Her breasts rose and fell beneath her threadbare linen shirt, a cold lump wedged deep within her chest. “He harmed me and mine, and that is all you need to know. Believe me, I have just cause for despising the man.”

“Did your family fall upon hard times, then? Did you lose your home and decide to lay the blame at Rafe’s doorstep?”

“Believe me, whatever blame I cast belongs at
no other
doorstep but his.”

Wyvern crossed his arms over his chest and leaned a seemingly negligent hip against the desk. “How old are you? You look little more than a girl.”

She drew herself up. “I fail to see what difference that makes. I am a woman grown. Seventeen, if you must know.”

“That old, hmm? It strikes me, though, that most young women your age would be tucked up tight inside their houses, far too afraid to venture out on their own, let alone go about dressed in male attire, and brandishing a pistol.”

“You will find that I am not like most young women.”

The edge of his mouth tipped upward, a twinkle glittering in his brilliant blue gaze. “Yes, so I am beginning to see.”

A fresh tingle inched down her spine as if he had reached out and stroked a hand over her skin, the sensation having nothing to do with the peril of the situation, and everything to do with her awareness of the man himself.
Indisputably, he is the most breathtaking man I have ever encountered. But I have no business noticing such things,
she scolded herself,
particularly not now when I have come on a mission of vengeance. A mission I cannot afford to delay.

“Now, Mr. Wyvern,” she said, determined to move matters forward. “If your curiosity has been satisfied, I suggest you take that seat.”

“As for my curiosity,” he continued, “you have done nothing but further whet my appetite. You haven’t even told me your name.”

“No, I have not,” she stated emphatically.

He inclined his head. “As you prefer, then. Now, which seat is it that I am to take?”

Mildly surprised by the question, she hesitated, relaxing her stance a bit as she gestured toward the correct chair. “That one. Just there.”

“Here?” He pointed, stretching out a hand.

She frowned, wondering if he might be hard of hearing. “Yes, there.”

Quick as a flash, he reached out and seized hold of her wrist, yanking her off balance. She gasped, unable to recover from his trick before he wrested the gun from her grip and imprisoned her inside his arms. In the blink of an eye, she found the tables turned, going suddenly from captor to captive.

“Ooh!” she cried, wriggling inside his hold. “Let me go!”

He tightened his arms, her body pressed firmly against his own. “Tut, tut. Quit your squirming, girl.”

She stomped on his foot, wincing as a rebounding pain jolted along her instep.

“Quit that, too,” he admonished, a spark of amused annoyance gleaming in his eyes. “You’re only causing yourself harm, since I have no intention of releasing you before I am ready to do so. In case you had not noticed, I am bigger and stronger and you are now entirely at my mercy.”

Grasping her so tightly the air wheezed out of her lungs, he leaned back and set the gun atop the desk. Turning around, he moved the two of them a few steps away—too far for her to have any chance of recovering the weapon. Only then did he ease his hold enough to let her breathe normally again. On a sharp inhale, she filled her lungs with air, the movement pressing her breasts against the solid wall of his chest.