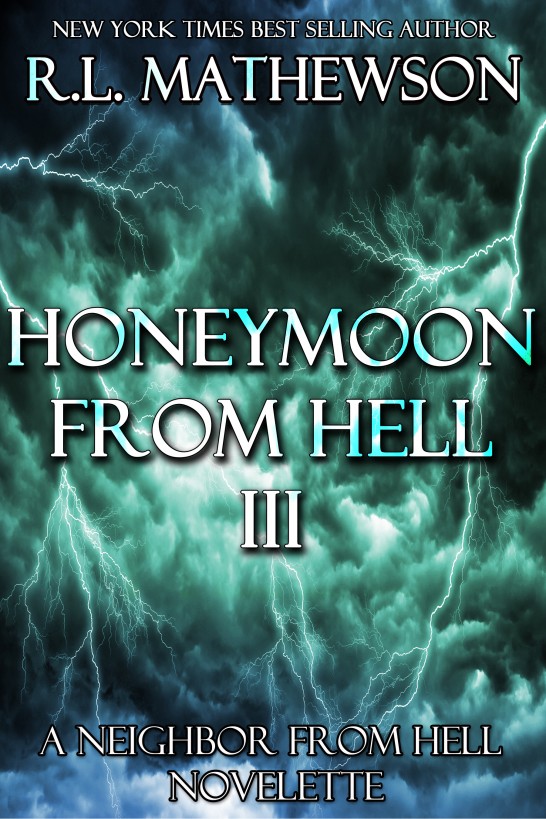 Other titles by R.L.
Mathewson
:

The Neighbor from Hell Series:

Truce: The Historic Neighbor from Hell

The Neighbor from Hell Collection I

Honeymoon from Hell I (Jason and Haley)

How to Write, Publish and All That Good
Stuff…

This is a work of fiction. All of the
characters, organizations and events described in this novel are
either products of the author's imagination or are used
fictitiously.

This book like every book that I have ever written
or will ever write is dedicated to my children, Kayley and Shane,
who have been with me through this journey from day one.

This book like everything else I do in my
life, I wrote for my children, Kayley and Shane. They’re the best
people that I know, make me happy, give me a reason to smile every
day. I love you, Kayley and Shane.

This book is also dedicated to the readers, who have stood by me.
Given me a chance and helped me along the way. I honestly don’t
know where I would be without you. So, on behalf of my family,
thank you for taking a chance on me and my seriously disturbing
humor.

Thank you for purchasing this book.

Sign up for my newsletter and receive the
latest news about the Neighbor from Hell Series as well as my other
series at:

“
I can’t believe we did
it,” he said, pulling into a spot on the freshly paved parking lot
of the newly refinished Strawberry Manor.

“
And one week ahead of
schedule, too,” Rory said, beaming with excitement as she looked at
the beautiful new hotel. He had to admit that it was beautiful, but
that wasn’t what he’d meant.

He chuckled as he threw the truck in park.
“I meant, I can’t believe that we’re married.”

“
Well, I really wasn’t left
with much of a choice,” Rory reminded him, smiling that pleased
little smile that she’d been wearing since the nervous Justice of
the Peace had announced them husband and wife about an hour
ago.

After the initial shock, the Justice of the
Peace decided that they needed a little fatherly advice and
explained that he believed that they were making a mistake and that
perhaps they needed to take some time and come back on December
2nd. At first, Connor had been pissed that he was interfering, but
by the time the JP mentioned December 2nd for the third time, it
became clear that the man had placed a bet that they would get
married on December 2nd. Once the J.P. resigned himself to losing
two hundred dollars, he’d married them, scowling at them the entire
time until the deed was done and he could storm off.

“
You didn’t have a choice,
huh?” he mused, reaching for his wife as she unclipped her seatbelt
and moved to straddle his lap.

“
No, not at all,” she
readily agreed with an impish smile that had him wishing that they
could skip the final inspection and start their wedding night
early.

“
And how’s that?” he asked,
wrapping his arms around her.

“
I had to do it for our
deal of course,” she said solemnly, looking so damn serious that he
couldn’t help but laugh.

“
For our deal, huh?” he
asked with a chuckle, leaning in and stealing a kiss.

“
Mmmhmm,” she murmured,
returning the kiss.

Before he could deepen the kiss, Rory opened
his door. She pulled away and climbed out of the truck, laughing
and jumping back when he reached for her.

“
We need to clear the site
so that we can start that insanely expensive honeymoon that you
promised me,” she said, heading for the manor.

“
That wasn’t part of our
deal,” he pointed out as he climbed out of the truck.

“
Do I get a veto?” he
asked, following after her.

“
Sorry. You’re a married
man now, Connor. Your job is to fulfill each and every one of my
needs,” she explained, throwing him a wink over her
shoulder.

“
And you need an insanely
expensive honeymoon?” he asked, chuckling as he veered off to the
right towards her trailer.

“
I really do,” she said,
sounding happy, really happy and for a moment he was content with
just watching her as she made her way inside the manor.

How had he gotten so lucky? he couldn’t help
but wonder as he turned around, hoping to get this done quickly so
that he could move onto the insanely expensive honeymoon that his
beautiful wife was demanding when he realized that he had one last
problem that he had to handle before it bit him in the ass.

“
I heard you tell Andrew
that this was all a game,” Jacob, the surly assistant from hell,
said numbly as he looked at Connor with what could only be
described as disgust. “I kept my mouth shut, because I thought Rory
could handle herself, but apparently I was wrong.”

“
It’s not what you think,
Jacob,” Connor said, taking a step towards the man only to have him
take two steps back.

“
Then you didn’t just marry
Rory so that you could take over her company?” Jacob
demanded.

Connor opened his mouth to tell him that he
had it all wrong, that it wasn’t like that anymore when he realized
that this simple misunderstanding had just blown up into a huge
fuck up in under sixty seconds.

“
Married?” Johnny repeated,
sharing a confused look with his brothers as they quickened their
pace as they headed towards him, looking pissed. As he watched the
five large men make their way towards him, he realized that there
was no way that he could explain any of this without landing in a
body cast. They wouldn’t believe him, not that he really cared, but
he did care if his wife believed him. As he watched them approach
and listened as Jacob ratted his ass out, he realized something
very important. He was out of options. So he did the only thing
that he could think of.

He made a run for it.

“
Get back here!” Johnny
yelled as Connor shoved past several men and ran inside the manor
and into the beautiful lobby.

“
Where’s Rory?” he asked
Andrew when he spotted his friend sitting on the couch, going over
paperwork and looking better than he had in months.

“
In the ballroom. Why?”
Andrew asked, but Connor didn’t have time to answer him, not with
five seriously pissed off James brothers after him.

“
You have some explaining
to do!” Reese, one of the Bradford twins and a fucking cop,
shouted, drawing his attention.

Scratch that, he had five James brothers, a
little prick bastard and two seriously pissed off looking Bradfords
after him and he probably only had seconds to convince Rory that he
loved her and wasn’t after her company before they beat the shit
out of him. Not wanting to waste another minute, he made a run for
the ballroom, shoving men aside as he ran down the long hallway.
The entire way he heard the sounds from the very large men chasing
after him, and he’d be lying if he said that he wasn’t a little
wary of the ass whooping that he was about to receive, but he was
more concerned about losing Rory.

He was just about to run through the open
doorway of the ballroom when Rory stepped out, looking down at the
clipboard in her hands and unaware of all the men barreling down on
her. She’d barely looked up when he grabbed her arm and gave it a
pull towards the elevators. He didn’t have a plan, but he hoped
like hell that this would at least buy him a few minutes.

“
What the hell are you
doing?” Rory demanded as he yanked her into the elevator, pushing
her behind him as he slammed his finger against the “Close Door”
button just as her brothers and cousins abruptly turned and headed
for them.

“
Come on, come on, come
on!” he muttered, panicking as the door started to close, but not
fast enough.

Her brothers were getting closer and closer
until all they had to do was put their arms out to stop the doors
from closing, taking away his only chance to make this right. Just
when he resigned himself to a trip to the hospital and losing Rory,
something unexpected happened. The two Bradford twins reached out
and grabbed Craig and Johnny just as they reached out to stop the
elevator doors and yanked them back, allowing the doors to
close.

“
What the hell is going
on?” Rory demanded.

“
First things first,” he
mumbled as he reached out and pulled the emergency elevator button.
The elevator shook hard once as it came to a complete stop. When
the alarm began to blare, he flicked it off, took a deep breath and
turned around to face the woman that he loved.

“
I love you,” he said,
needing her to know that. “I’ve always loved you and no matter what
happens, I will always love you.”

“
You son of a bitch!” Bryce
shouted, reminding Connor that it probably wouldn’t take the
brothers long to crack those doors open and kill him.

“
I love you too, Connor,
but what the hell is going on?” Rory asked, shooting a nervous look
past him at the closed doors.

“
I need to tell you
something,” he said, cringing when the banging behind him
started.

“
Yeah, looks that way,”
Rory mused, shifting her gaze right back on him.

“
Did I mention that I love
you?” he asked, shooting her a nervous smile as he tried to figure
out how exactly to explain the whole fucked up deal he’d come up
without Rory going for his balls.

“
Start talking, Connor,”
Rory said, arching an expectant brow as she folded her arms over
her chest.

Since time was a serious factor, he decided
to get right to the point. “I fucked up.”

“
There was more to the deal
than I let on,” he said in a rush. “I didn’t think it was worth
mentioning, because once I realized that I was still in love with
you, I didn’t want it any longer.”

“
What didn’t you want any
longer?” she asked with a putout sigh, the same one she always used
when he was telling her how he’d screwed her over. He felt himself
relax, somewhat.

“
The plan,” he said,
searching desperately for the right way to explain his original
plan to her without making her hate him.

“
And why did Darrin and
Reese attack my brothers?” she asked.

“
Because of me,” Mr. James
suddenly announced from behind him, making him curse when he
realized that at some point during their conversation the doors had
been opened.

Once Upon a Kiss (Book Club Belles Society) by Jayne Fresina
The Christmas Joy Ride by Melody Carlson
Larry and the Meaning of Life by Janet Tashjian
Life Class: The Selected Memoirs Of Diana Athill by Athill, Diana
Wormwood Dawn (Episode VI) by Crae, Edward
Whitechapel by Bryan Lightbody
Dreaming in English by Laura Fitzgerald
The Other Side of the World by Stephanie Bishop
Anagrams by Lorrie Moore
How to Seduce a Gargoyle in 10 Days by Saranna DeWylde