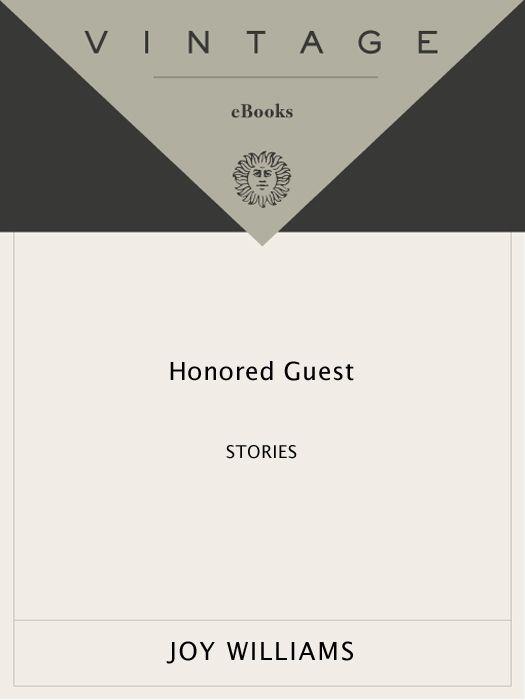 “In wonderful, stark relief, Williams gives us a glimpse into this pliability of the human heart, its marvelous ability to withstand adversity and accommodate whatever comes next.”

“If Joy Williams’s publisher made cigarettes rather than story collections it would be required to slap a consumer warning on her latest collection,
Honored Guest…
. [It’s] narcotic—alluring precisely because it is toxic, dangerous. And Williams is so good she merely has to wave her characters’ melancholia under our noses and we crave more.”

“Darkly enticing and intuitive…. In Williams’s hands, the inevitability of death is both poignant and, at times, comfortably humorous.”

“The unexpected is the only thing that can be counted on—other than the author’s brilliant prose, acerbic humor and implicit biting commentary on the state of our world today.”

“Captur[es] the casual brutality of everyday life with a combination of grim humor, macabre incident and an ironic eye…. There’s a thrilling appeal, a perverse pleasure, in reading Williams’ cold take on things…. Fascinating.”

“Each [story] spins with the searing comedy and blunt drama of the gallows…. Williams is a deeply compassionate writer, and in these luminous, feeling moments, the specter of another writer from another century and another country rises: Anton Chekhov, the book’s honored ghost.”

“Joy Williams’s collection is an engrossing and perceptive work.”

“[Williams] balances horror and humor with uncanny skill and laces her stories with compassion…. Her stories stick in the mind like burrs.”

“There is much artistry to be found in the short story…. Especially when it is in the hands of an artist like Joy Williams.”

“Of the many qualities of her prose—clarity, economy, intelligence, complete mastery of the sentence—the most conspicuous is authority…. Joy Williams’s stories are illuminating, burning, intelligent and large.”

Joy Williams is the author of four novels—the most recent,
The Quick and the Dead
, was a finalist for the Pulitzer Prize in 2001—and two earlier collections of stories, as well as
Ill Nature
, a book of essays that was a finalist for the National Book Critics Circle Award for criticism. Among her many honors are the Rea Award for the short story and the Strauss Living Award from the American Academy of Arts and Letters. She lives in Key West, Florida, and Tucson, Arizona.

State of Grace
Taking Care: Stories
The Changeling
Breaking and Entering
Escapes: Stories
The Quick and the Dead

The Florida Keys: A History and Guide
Ill Nature: Rants and Reflections on Humanity and
Other Animals 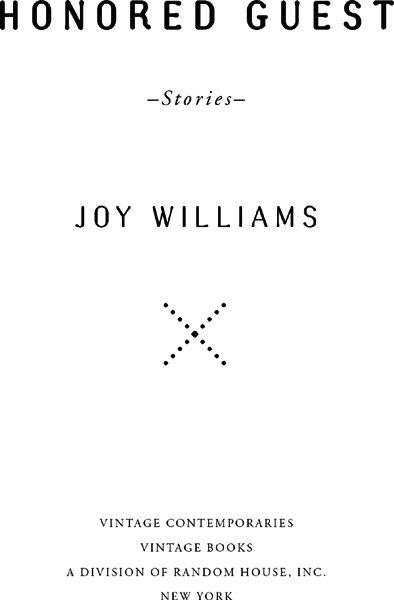 S
HE HAD BEEN HAVING
a rough time of it and thought about suicide sometimes, but suicide was so corny and you had to be careful in this milieu which was eleventh grade because two of her classmates had committed suicide the year before and between them they left twenty-four suicide notes and had become just a joke. They had left the notes everywhere and they were full of misspellings and pretensions. Theirs had been a false show. Then this year a girl had taken an overdose of Tylenol which of course did nothing at all, but word of it got out and when she came back to school her locker had been broken into and was full of Tylenol, just jammed with it. Like, you moron. Under the circumstances, it was amazing that Helen thought of suicide at all. It was just not cool. You only made a fool of yourself. And the parents of these people were mocked too. They were considered to be suicide-enhancing, evil and weak, and they were ignored and barely tolerated. This was a
small town. Helen didn’t want to make it any harder on her mother than circumstances already had.

There was a little brass bell on her mother’s bedside table. It was the same little brass bell that had been placed at Helen’s command when she had been a little girl, sick with some harmless little kid’s sickness. She had just to reach out her hand and ring the bell and her mother would come or even her father. Her mother never used the bell now and kept it there as sort of a joke, actually. Her mother was not utterly confined to bed. She moved around a bit at night and placed herself, or was placed by others, in other rooms during the day. Occasionally one of the women who had been hired to care for her during the day would even take her for a drive, out to see the icicles or go to the bank window. Her mother’s name was Lenore and sometimes in the night her mother would call out this name, her own, “Lenore!” in a strong, urgent voice and Helen in her own room would shudder and cry a little.

This had been going on for a while. In the summer Lenore had been diagnosed and condemned but she kept bouncing back, as the doctors put it, until recently. The daisies that bloomed in the fall down by the storm-split elm had come and gone, even the little kids at Halloween. Thanksgiving had passed without comment and it would be Christmas soon. Lenore was ignoring it. The boxes of balls and lights were in the cellar, buried deep. Helen had made the horrible mistake of asking her what she wanted for Christmas one
night and Lenore had said, “Are you stupid?” Then she said, “Oh, I don’t mean to be so impatient, it’s the medicine, my voice doesn’t even sound right. Does my voice sound right? Get me something you’ll want later. A piece of jewelry or something. Do you want the money for it?” She meant this sincerely.

At the beginning they had talked eagerly like equals. This was more important than a wedding, this preparation. They even laughed like girls together remembering things. They remembered when Helen was a little girl before the divorce and they were all driving somewhere and Helen’s father was stopped for speeding and Lenore wanted her picture taken with the policeman and Helen had taken it. “Wasn’t that mean!” Lenore said to Helen.

When Lenore died, Helen would go down to Florida and live with her father. “I’ve never had the slightest desire to visit Florida,” Lenore would say. “You can have it.”

At the beginning, death was giving them the opportunity to be interesting. This was something special. There was only one crack at this. But then they lost sight of it somehow. It became a lesser thing, more terrible. Its meaning crumbled. They began waiting for it. Terrible, terrible. Lenore had friends but they called now, they didn’t come over so much. “Don’t come over,” Lenore would tell them, “it wears me out.” Little things started to go wrong with the house, leaks and lights. The bulb in the kitchen would flutter when the water was turned on. Helen grew fat for some reason. The dog, their dog, began to change. He grew shy. “Do you think he’s acting funny?” Lenore asked Helen.

She did not tell Helen that the dog had begun to growl at her. It was a secret growl, he never did it in front of anyone else.
He had taken to carrying one of her slippers around with him. He was almost never without it. He cherished her slipper.

“Do you remember when I put Grecian Formula on his muzzle because he turned gray so young?” Lenore said. “He was only about a year old and began to turn gray? The things I used to do. The way I spent my time.”

But now she did not know what to do with time at all. It seemed more expectant than ever. One couldn’t satisfy it, one could never do enough for it.

She was so uneasy.

Lenore had a dream in which she wasn’t dying at all. Someone else had died. People had told her this over and over again. And now they were getting tired of reminding her, impatient.

She had a dream of eating bread and dying. Two large loaves. Pounds of it, still warm from the oven. She ate it all, she was so hungry, starving! But then she died. It was the bread. It was too hot, was the explanation. There were people in her room but she was not among them.

When she woke, she could feel the hot, gummy, almost liquid bread in her throat, scalding it. She lay in bed on her side, her dark eyes open. It was four o’clock in the morning. She swung her legs to the floor. The dog growled at her. He slept in her room with her slipper but he growled as she made her way past him. Sometimes self-pity would rise within her and she would stare at the dog, tears in her eyes, listening to him growl. The more she stared, the more sustained was his soft growl.

She had a dream about a tattoo. This was a pleasant dream. She was walking away and she had the most beautiful tattoo covering her shoulders and back, even the back of her legs. It was unspeakably fine.

Helen had a dream that her mother wanted a tattoo. She wanted to be tattooed all over, a full custom bodysuit, but no one would do it. Helen woke protesting this, grunting and cold. She had kicked off her blankets. She pulled them up and curled tightly beneath them. There was a boy at school who had gotten a tattoo and now they wouldn’t let him play basketball.

In the morning Lenore said, “Would you get a tattoo with me? We could do this together. I don’t think it’s creepy,” she added. “I think you’ll be glad later. A pretty one, just small somewhere. What do you think?” The more she considered it, the more it seemed the perfect thing to do. What else could be done? She’d already given Helen her wedding ring.

“I’ll get him to come over here, to the house. I’ll arrange it,” Lenore said. Helen couldn’t defend herself against this notion. She still felt sleepy, she was always sleepy. There was something wrong with her mother’s idea but not much.

But Lenore could not arrange it. When Helen returned from school, her mother said, “It can’t be done. I’m so upset and I’ve lost interest so I’ll give you the short version. I called … I must have made twenty calls. At last I got someone to speak to me. His name was Smokin’ Joe and he was a hundred miles away but sounded as though he’d do it. And I asked him if there was any place he didn’t tattoo, and he said faces, dicks and hands.”

Maya's Notebook: A Novel by Isabel Allende
The Telegraph Book of Readers' Letters from the Great War by Gavin Fuller
Ranch 1.5-The Christmas Tree Bargain by J.L. Langley
The Arrival by CM Doporto
Winter's Night by Sherrilyn Kenyon
Creatures of the Earth by John McGahern
Wanted by Lance, Amanda
Bless the Beasts & Children by Glendon Swarthout
It Won't Hurt a Bit by Yeadon, Jane
The Naturals by Barnes, Jennifer Lynn